The 25 news outlets analyzed in this study emphasized a varying mix of topics during President Joe Biden’s first 60 days in office, and they differed dramatically in terms of the balance of positive and negative assessments they provided. Outlets with right-leaning audiences, in particular, stood out in these respects.

At the same time, these media outlets similarly framed their stories much more around Biden and his administration’s policy agenda than on leadership and character, a sharp break from the pattern observed in the early days of Donald Trump’s administration.

Roadmap to Part 1 of this report 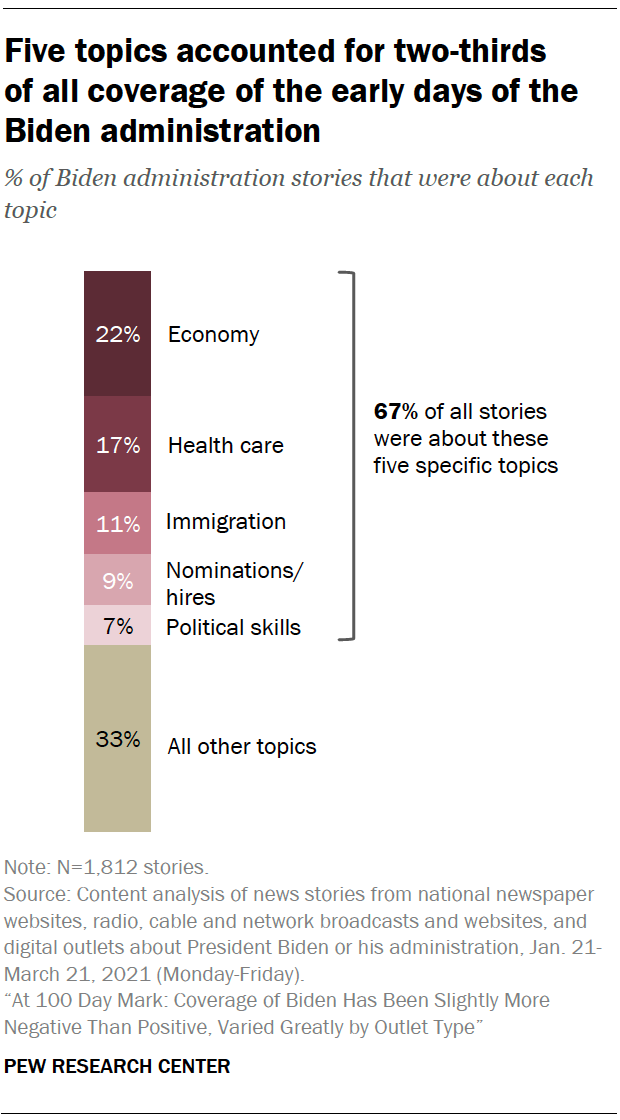 Across the 25 news outlets included in this study, five topics accounted for two-thirds (67%) of all coverage in Biden’s first 60 days. Stories about the economy ranked highest, making up 22% of all stories studied, followed closely by health care news at 17%.

Both the economy and health care were major areas of focus in the early days of the administration: Biden signed a $1.9 trillion economic stimulus bill into law on March 11, while the federal government ramped up efforts to distribute COVID-19 vaccines. These two initiatives, as well as several others, were deeply intertwined with the COVID-19 pandemic. Because of that intense overlap, story references to COVID-19 were also measured separately – measuring whether COVID-19 was a major or minor part of the story – and are discussed in detail below.

The next most frequently covered topic was immigration (11% of all stories studied during this period), which gained attention as migrant apprehensions at the U.S.-Mexico border surged.

Stories discussing the political skills of Biden and his administration made up 7% of all stories (a topic area that broadly encompasses their level of expertise, strategy and management). All other individual topics accounted for 5% or fewer of media stories in the administration’s first 60 days. 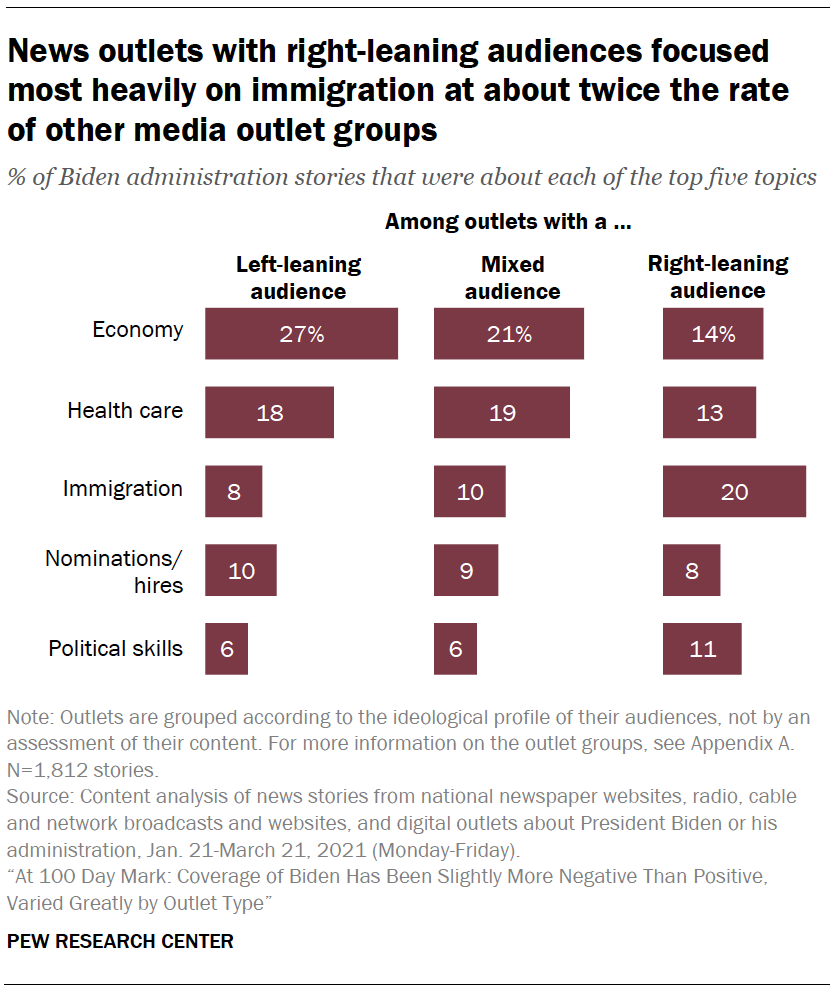 The emphasis of news coverage during the early days of the Biden administration differed somewhat across news outlets based on the ideological leaning of their audiences. 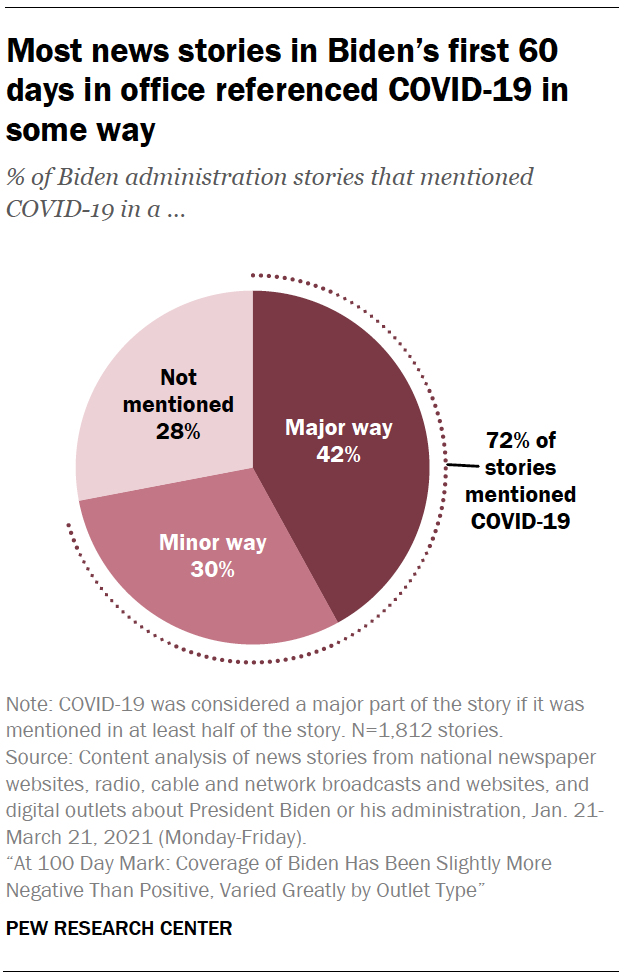 COVID-19 was a pervasive part of the media narrative of Biden’s first 60 days in office, cutting across a wide range of topic areas, especially the economy and health care. As such, references to the pandemic were measured separately from topic.

COVID-19 most frequently came up in media coverage related to health care and the economy. Nearly every health care story analyzed in this study referenced the coronavirus in some way, with a large majority of these stories including it as a major element of the reporting. The vast majority of stories about the economy (96%) also mentioned the virus, with 79% focusing on it in a major way. COVID-19 came up in 80% of stories about Biden’s political skills and management and 64% of immigration stories, usually only in a minor way – i.e., in less than half of the story.

The pandemic was mentioned less frequently in news stories about Biden’s presidential nominees: 42% of these stories mentioned COVID-19, usually in a minor way. 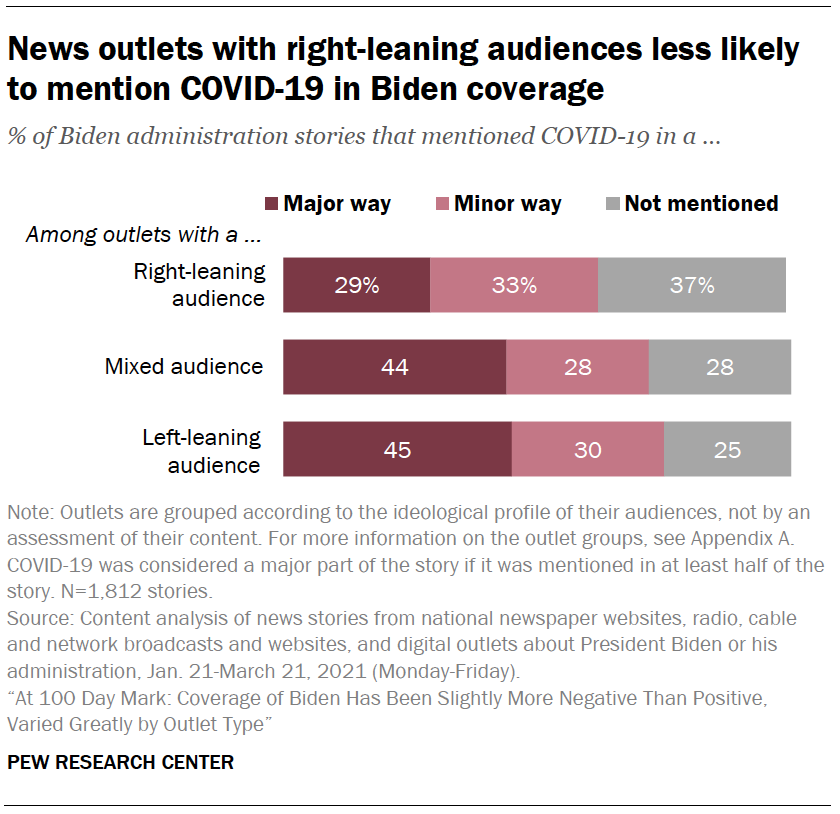 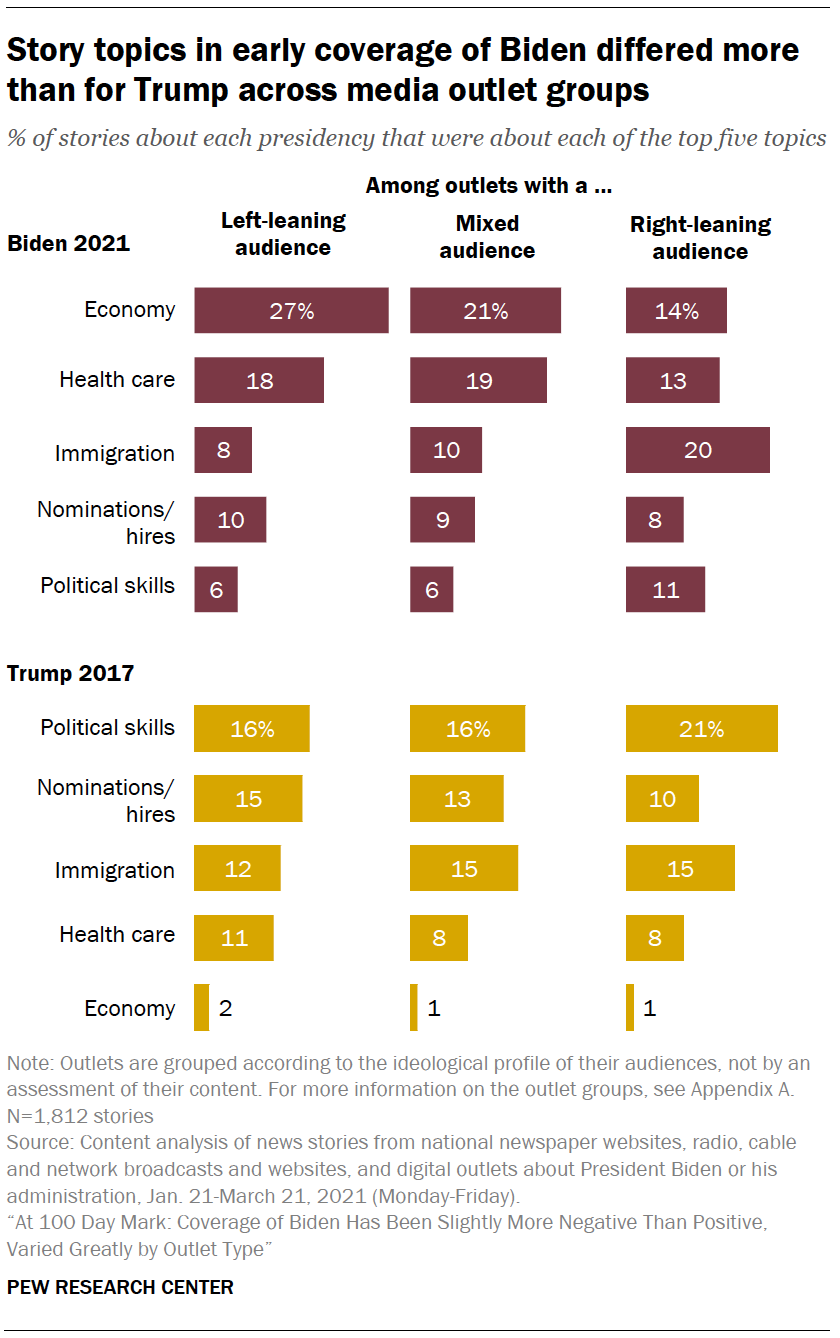 The topics that make the news at the outset of one administration can differ from those in another administration, but there are some recurring themes in 2021 and 2017.1

Four of the top five topics covered during the early days of the Biden administration also made the top five in the Trump administration’s first days: political skills, immigration, nominations and hires, and health care. The exception was the topic of the economy, which was the most frequently covered subject during the Biden administration’s early days but not among the top topics for Trump. Conversely, U.S.-Russia relations were among the top subjects covered in Trump’s early days but not among those for Biden.2

Another difference worth noting: While the president’s political skills was among the most frequently covered topics in the early days of the Trump administration (17% of stories), it was the focus of a much smaller share of stories about Biden’s early days in office (7%).

Perhaps more noteworthy is the greater degree of difference among the three types of outlets this year when compared with the first 100 days of the Trump administration. In a 2017 analysis, all three types of outlets devoted comparable attention to a similar mix of topics. In 2021, outlets with right-leaning audiences stood out in their heavier focus on immigration.

Assessments of Biden’s early days in office were slightly more negative than positive, but far more positive than coverage of Trump’s early days

The statements made by sources in a story – as well as the words used by reporters – can determine whether it offers a positive assessment, a negative assessment or neither. In this study, Center researchers analyzed each statement made by the reporter and sources cited in a story to determine how, if at all, it assessed the words or actions of Biden and his administration. Stories were considered positive if they had at least twice as many positive as negative statements; they were considered negative if the reverse was true. If neither threshold was met, researchers coded stories as neither positive nor negative. (It is important to note that deeming stories positive or negative does not mean they are biased or inaccurate, but rather that the mix of comments ended up offering a positive or negative sense of what occurred. Read more about the methodology here.) 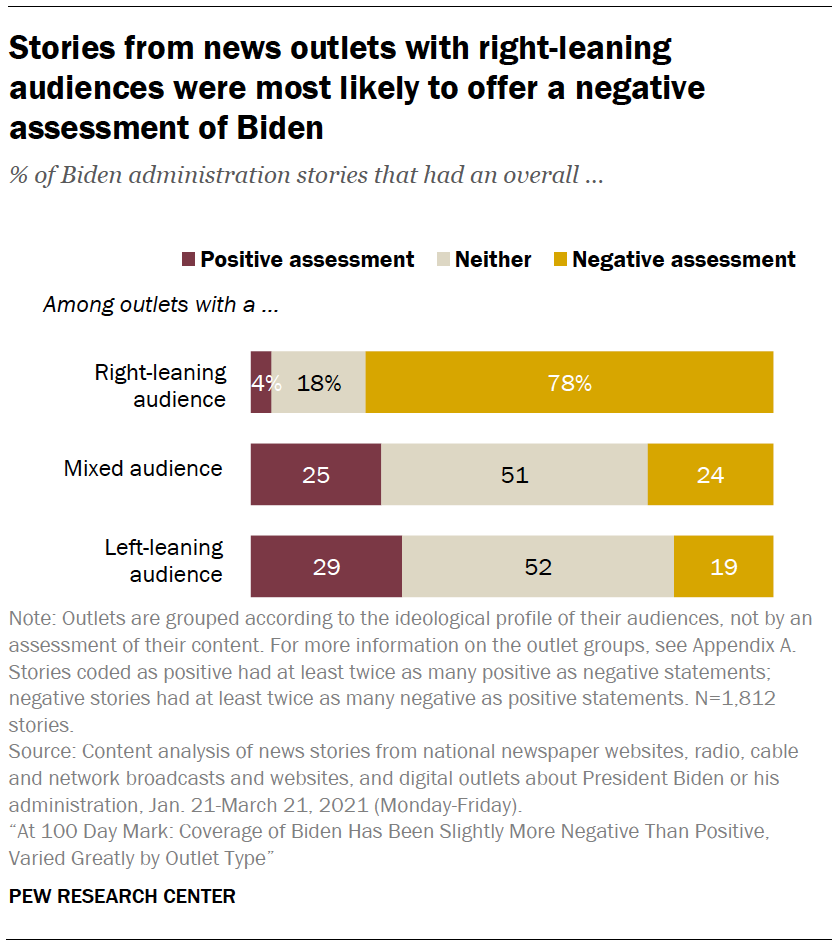 Assessments of Biden and his administration differed dramatically between outlets with right-leaning audiences and those with left-leaning or ideologically mixed audiences.

About eight-in-ten stories from outlets with right-leaning audiences (78%) offered a negative assessment of the actions of Biden or his administration. Just 4% offered a positive assessment, while 18% were neither positive nor negative. 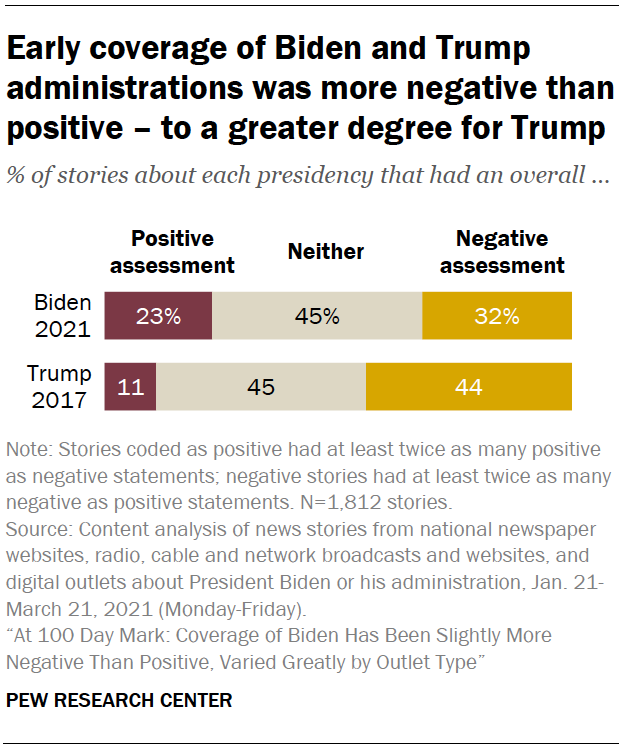 Stories about Trump’s first 100 days in office were four times as likely to be negative as positive (44% vs. 11% respectively).3 For both Biden and Trump, however, just under half of all assessments were neither positive nor negative. 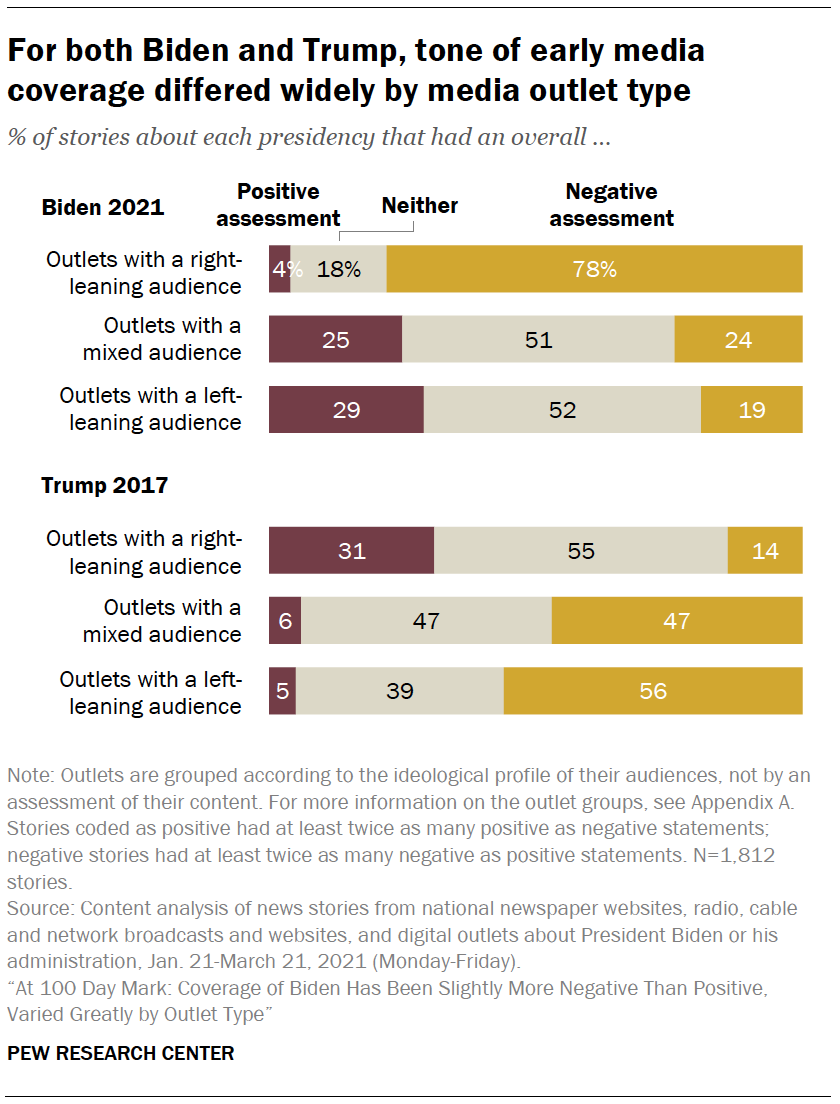 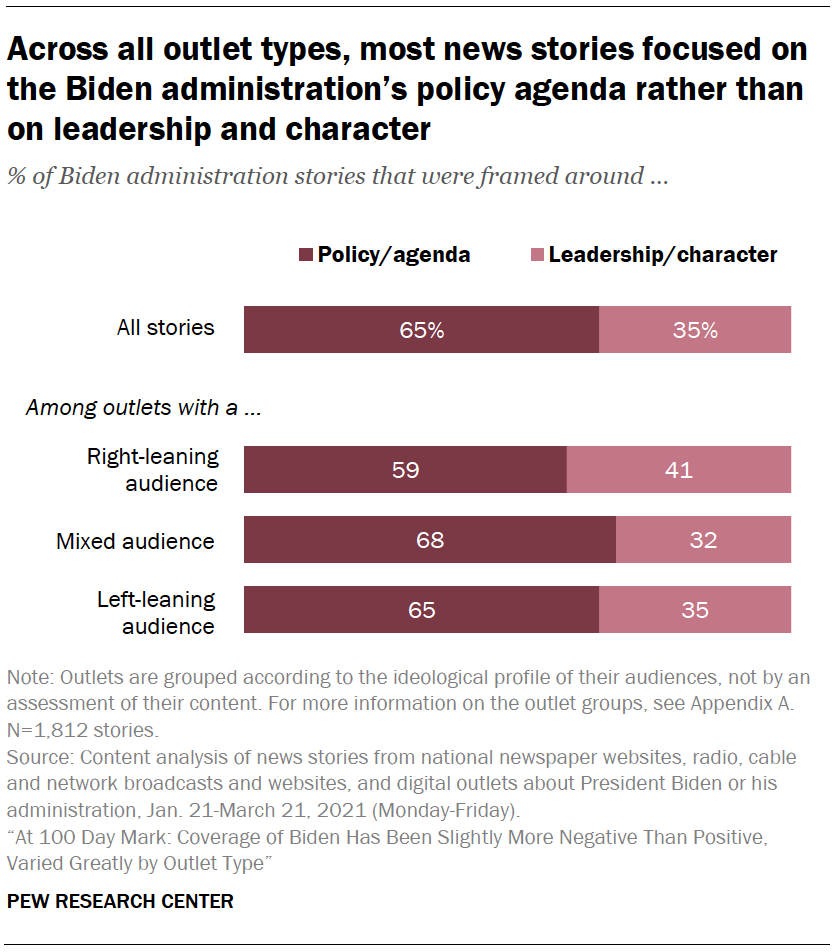 When reporting a story about a specific topic, journalists can use various frames to orient the narrative. This study classifies stories into one of two main frames (whichever accounted for more than 50% of the story): the president’s leadership and character, or his policy and agenda. In the first 60 days of the Biden administration, all three media outlet groupings were much more likely to frame their stories around the president’s policy agenda than his character and leadership skills.

Overall, roughly two-thirds of the stories (65%) were framed around Biden’s policy agenda. That included majorities of stories from all three media groups, with right-leaning outlets the least likely to do so, at 59%.

Assessment of the Biden administration varied by topic being addressed 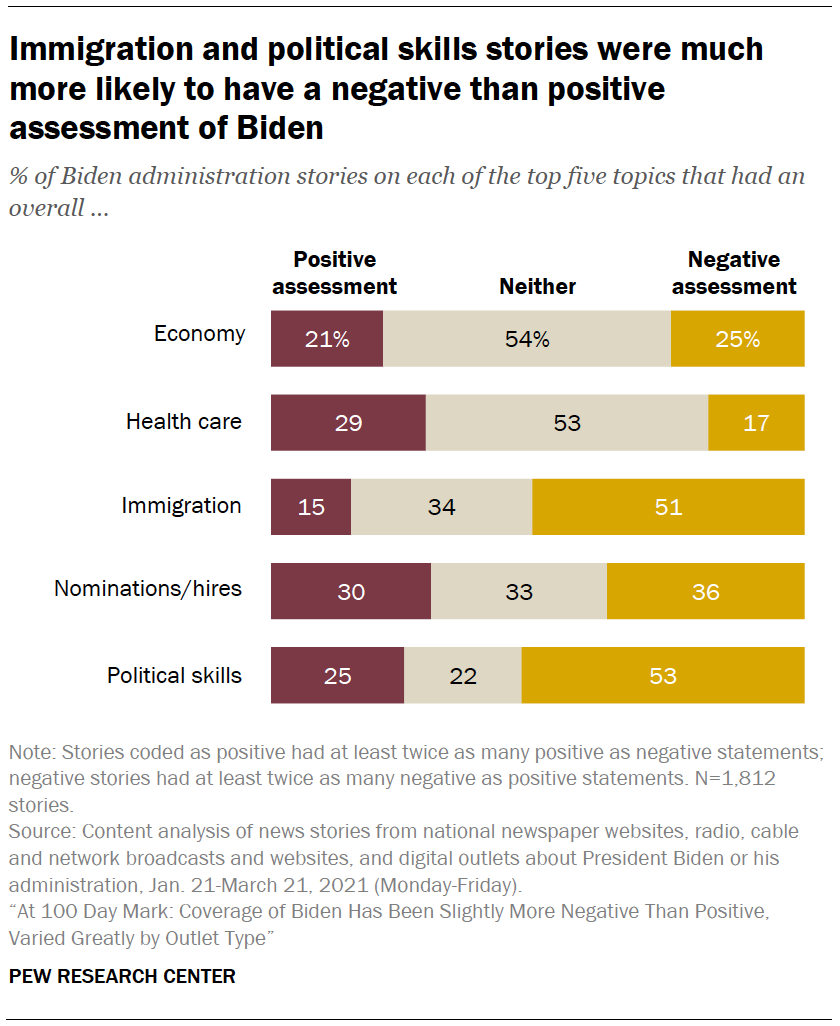 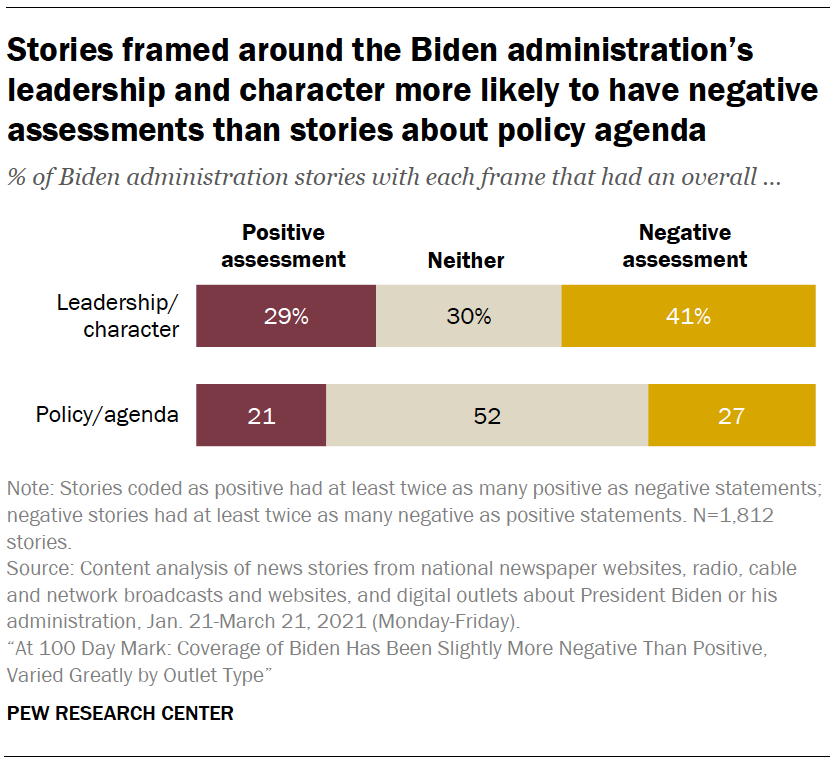 While the media’s overall coverage of the Biden administration’s early days focused much more on the president’s policy agenda than his leadership skills and character, negative assessments were more common in stories that focused on the latter.

Next: 2. News outlets with right-leaning audiences used fewer types of sources than those with left-leaning or mixed audiences Next Page → ← Prev Page