Another way of understanding people’s sense of the news is to ask about their knowledge of current events. The survey asked five separate fact-based questions related to issues in the early days of the Biden administration, including the number of doses required for the available COVID-19 vaccines and the administration’s initial goals surrounding vaccine distribution. Other questions gauged knowledge about Biden’s proposed increase in the national minimum wage, his actions surrounding the border wall and climate-related measures.

Overall, Americans are most likely to know the administration’s proposed increase of the national minimum wage: About eight-in-ten U.S. adults (81%) correctly answered that Biden proposed to raise the minimum wage to $15 per hour. Most Americans answered this question correctly regardless of whether they get their news from outlets with right-leaning audiences, left-leaning audiences or some mixture of the two.

Solid majorities of U.S. adults overall and in all media diet groups also correctly responded that the number of doses required for the COVID-19 vaccines approved for use in the U.S. varies. About seven-in-ten Americans (69%) correctly answered this question, including at least 65% in each of the five news consumption groups.

About one-in-five Americans (18%) incorrectly said that all the vaccines require two doses; this is true for the Pfizer-BioNTech vaccine and the Moderna vaccine but not for the Johnson & Johnson vaccine.1 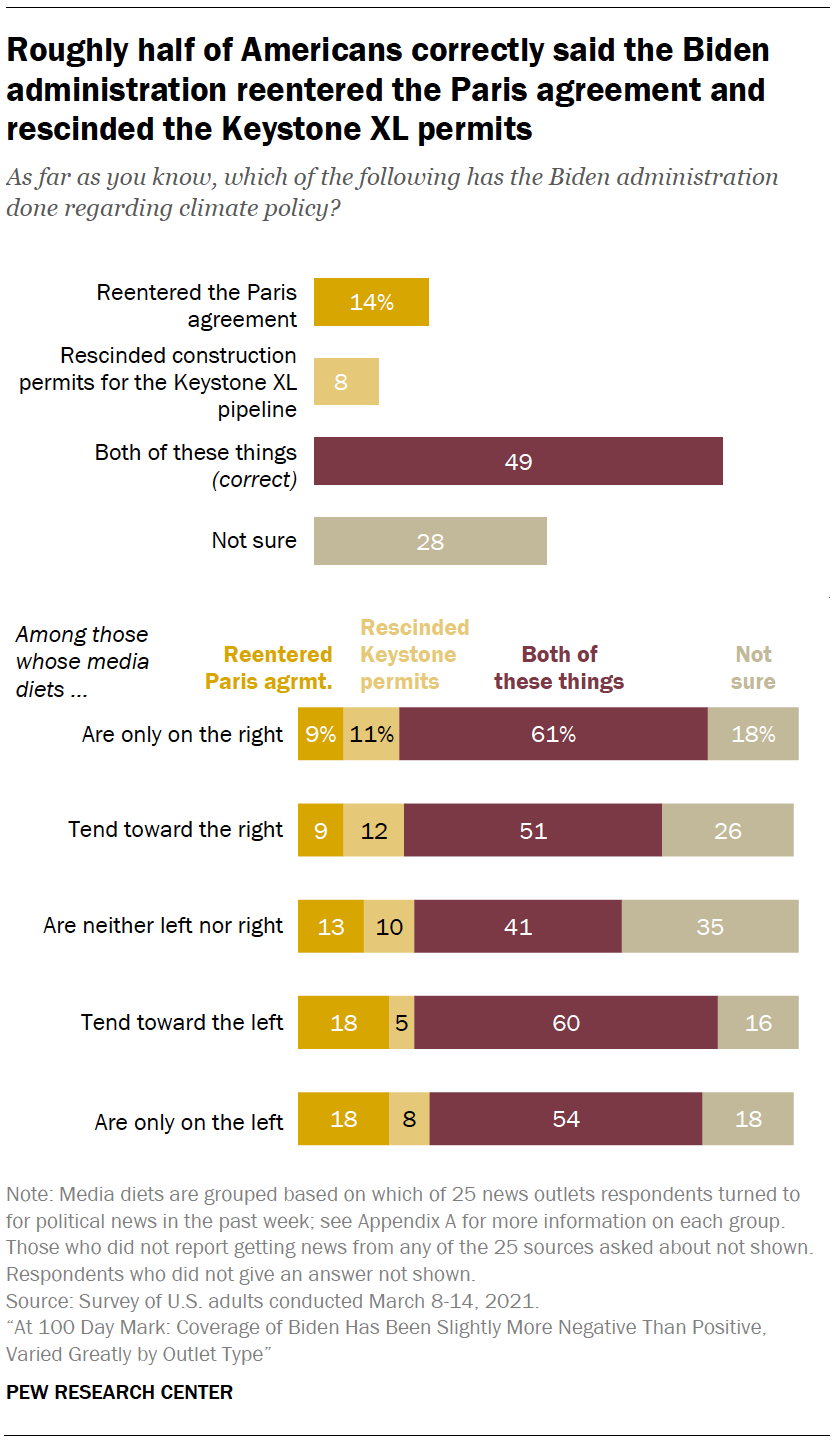 Americans are less likely to correctly answer the other three questions, in some cases reflecting differences across media diet groups.

When it comes to climate policy, about half of U.S. adults (49%) knew that the Biden administration both reentered the Paris agreement and rescinded the construction permits for the Keystone XL pipeline. Smaller shares said the administration has only reentered the Paris agreement (14%) or only stopped construction on the pipeline (8%), but not both, and 28% said that they were not sure. 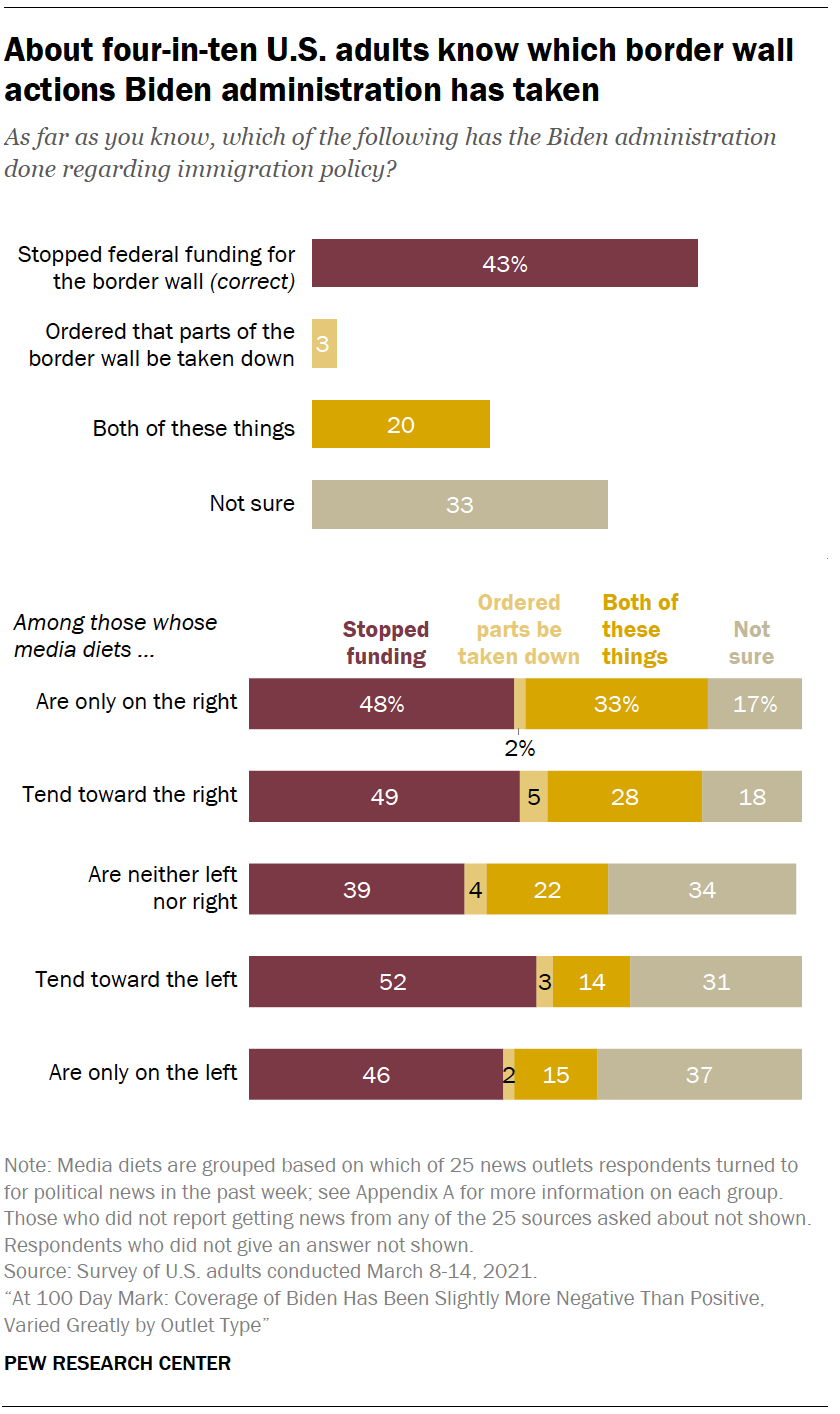 When asked about administration actions surrounding immigration, about four-in-ten U.S. adults (43%) correctly answered that the new administration has stopped federal funding of the border wall between the U.S. and Mexico but has not ordered that parts of the wall be taken down. One-in-five incorrectly said that both of these things have happened, while one-third said they were not sure.

There is only modest variation across media groups on this question, with the share answering correctly ranging from 52% among those with media diets that tend toward the left to 39% among the group in the middle.

The greatest level of uncertainty emerged around the question of whether the Biden administration has been meeting its initial goal of vaccinating 1 million Americans per day (a goal that has since been increased to 200 million in the first 100 days).

A third of Americans (33%) correctly responded that the administration was meeting or exceeding this goal, while 27% said the White House was not meeting its goal and 40% said they were unsure.

This question also had the greatest variance across media diet groups. More than four-in-ten of those with a media diet only on the right (44%) or tending to the right (45%) responded that the administration was not meeting this goal, more than any other group. Those whose media diets tend left were most likely to give the correct response – 46% said the administration was meeting or exceeding its initial goal, compared with just 20% who said it was not.