2. Republicans who relied on Trump for news in 2020 diverged from others in GOP in views of COVID-19, election 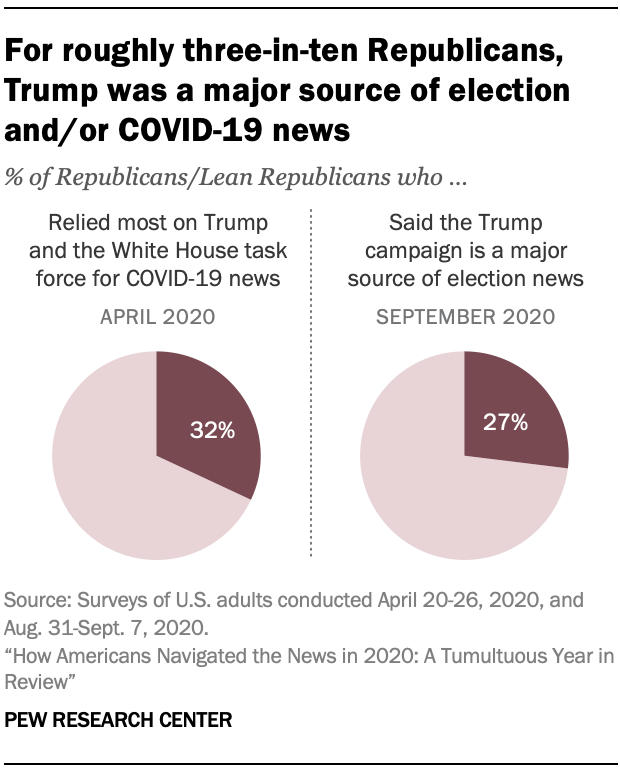 While large partisan gaps emerged in views of two dominant stories of last year – the COVID-19 pandemic and the presidential election – there also was one clear and consistent difference within a single party. As a whole, Republicans who turned to Donald Trump as a key source of news about these events had different perspectives from Republicans who did not.

Overall, around three-in-ten Republicans and Republican-leaning independents (32%) said in April of 2020 that they relied most on Trump and the White House coronavirus task force for COVID-19 news, while a slightly smaller share (27%) said in September 2020 that the Trump campaign was a major source of news about politics and the presidential election for them. Survey data from the Center’s American News Pathways project reveals that these Republicans were more likely than other Republicans to think the COVID-19 pandemic had been overblown, more likely to see voter fraud as a significant threat to election integrity and more likely to render a harsh verdict on the media. These are all views that are largely in sync with the former president’s messaging and narratives.

Takeaway #1: Those Republicans who relied on Trump for COVID-19 news were more likely to say the pandemic was overblown and that the media covered it poorly 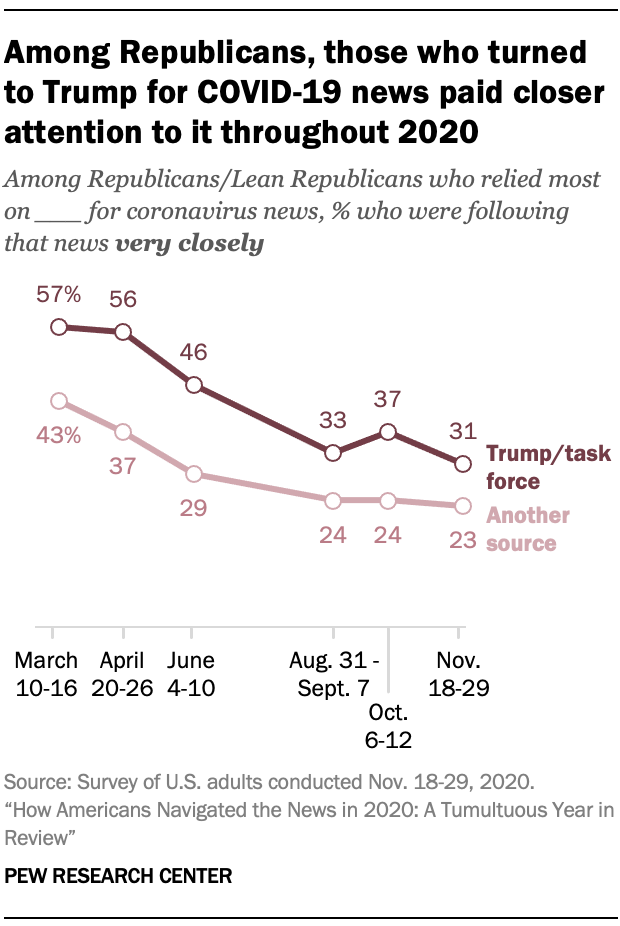 Among those who relied most on Trump and the White House coronavirus task force for news about the pandemic, views were more aligned with Trump’s messaging. For instance, among the consistent messages from then-President Trump were that the COVID-19 pandemic had been overblown, that his administration was handling the situation effectively and that the outbreak would soon abate.

Throughout the year, Trump also continued to criticize news organizations and accuse them of providing erroneous and misleading information – often calling it “fake news.” 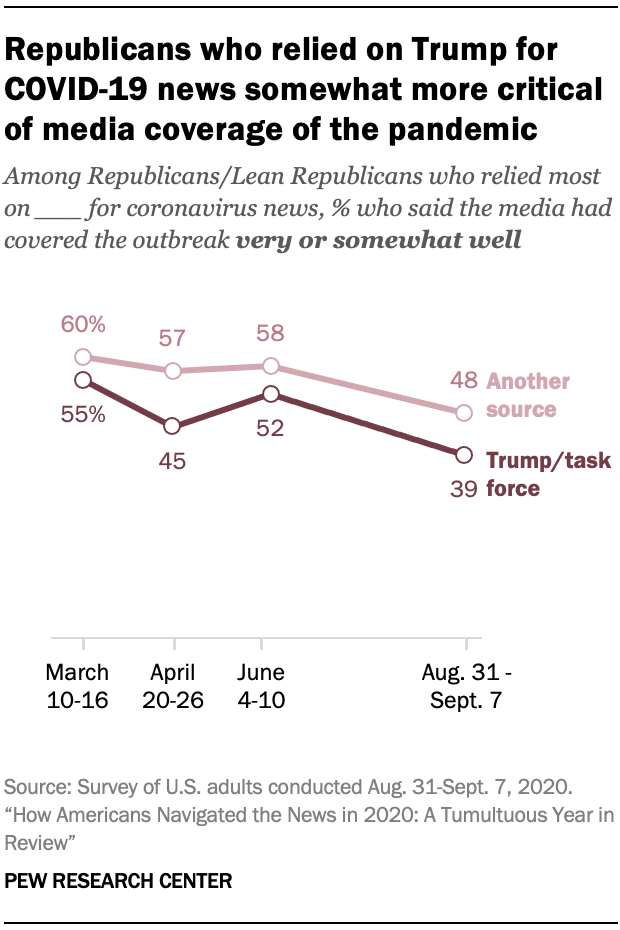 Indeed, the survey data suggests that the group relying on Trump for information about the coronavirus was more likely to be critical of the media. In March, as the COVID-19 outbreak was first being felt in the U.S., Republicans who relied most on Trump and the White House coronavirus task force for news were somewhat less likely than other Republicans to say the media had done “very” or “somewhat” well covering the pandemic (55% vs. 60%). In late April, that gap widened, with 45% of the Trump group saying the media had done well, compared with 57% of Republicans who did not turn to Trump. And in early September, as overall Republican views of coverage grew more critical, 39% of the Trump group said the media had covered the pandemic well.

Another question that was asked multiple times over the course of the year did not mention the media explicitly, but was related: Had the COVID-19 outbreak been overblown or underplayed? Again, the gap between Republicans who relied on Trump for their news about the outbreak and those who didn’t remained steady throughout the year.

Similarly, in the late April survey, half of Republicans who relied most on Trump and the White House task force for news about the pandemic (50%) said that media coverage of the outbreak was largely inaccurate, compared with about one-third (34%) of Republicans who were not most reliant on Trump. A majority (63%) of those most reliant on Trump also said that same media coverage was hurting the country, while a smaller share of other Republicans (50%) shared this perspective.

In addition, two-thirds of Republicans who turned most to Trump (67%) said pandemic coverage revealed journalists to be working mainly to benefit themselves rather than the public, compared with 52% of Republicans who mostly got their news about the pandemic elsewhere. And 43% in the Trump group said coverage was not providing them the information they needed, while fewer (33%) said it was providing the necessary information. Among those not relying on Trump, the numbers were reversed: 48% reported getting the information they needed, while 31% were not.

Once Election Day passed, this pattern persisted when it came to following Trump’s post-election statements. While 45% of those using Trump as a major source were following those statements very closely, only 17% of the other Republicans were, according to a late November survey. 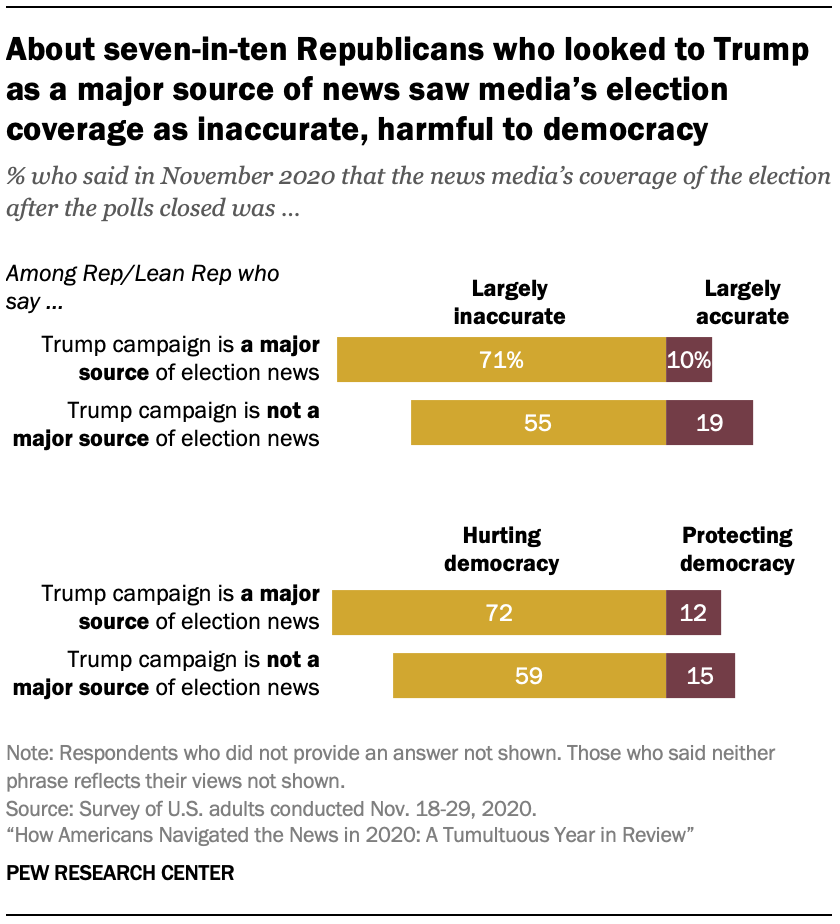 Differences among Republicans in views of media coverage of the election also emerged in November. No immediate winner was announced on Nov. 3 as the major media outlets waited for vote-counting to continue for four days before calling the race for Joe Biden. Just after the election, Trump falsely declared himself the winner. He continued to claim, without evidence, that the outcome had been tainted by widespread voter fraud, and launched numerous unsuccessful legal and political challenges to the results.

About seven-in-ten Republicans who used Trump and his campaign as a major source for campaign news (71%) said media coverage after the polls closed on Nov. 3 was largely inaccurate – substantially higher than the 55% of Republicans who did not turn to Trump as a key source. In addition, a similar share of those in the Trump group (69%) said the media’s election coverage did not give them the information they needed, compared with 54% of other Republicans. 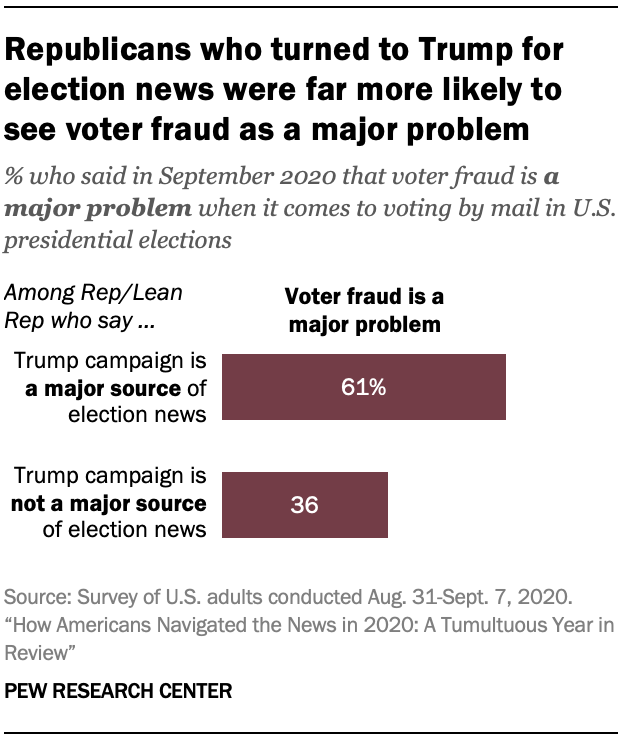 Again, roughly seven-in-ten Republicans who relied on Trump for their election news (72%) said post-Election Day coverage hurt democracy, compared with 59% of other Republicans. And 76% of those who used Trump as a major source said the coverage after the polls closed was not professional; that number slipped to 62% among Republicans who did not turn to Trump. To be sure, skepticism toward the media is common among all Republicans, but these findings show that it was especially widespread among those who were getting their news from Trump directly.

On a number of occasions before Election Day, Trump had falsely claimed that mail-in voting, which became more significant in the 2020 election because of concerns about in-person voting during the pandemic, was unreliable and susceptible to fraud. Again, this messaging seems to have sunk in among those who were listening most closely to him. 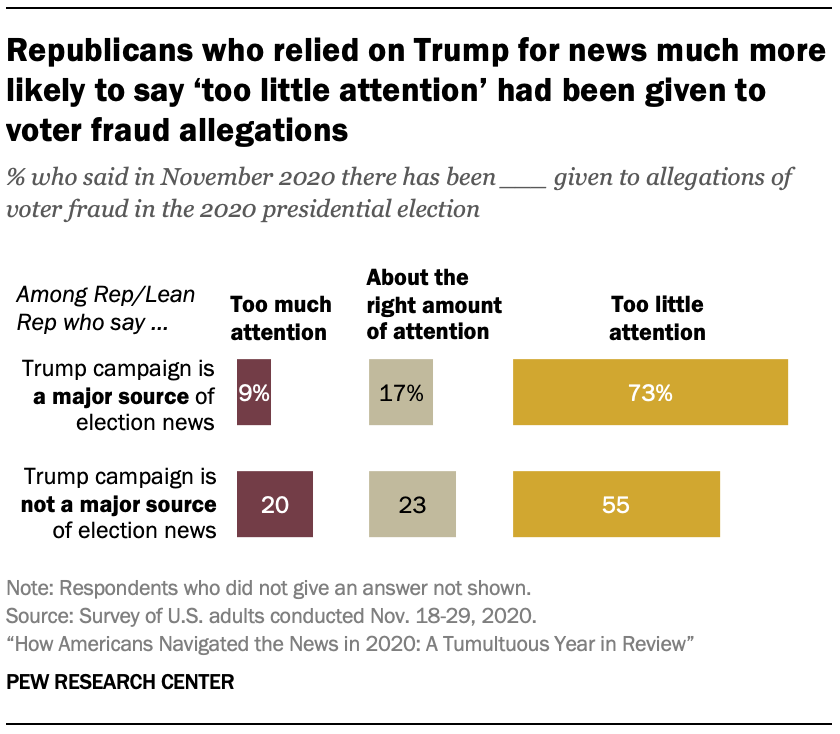 In early September, a clear majority of Republicans who were using the Trump campaign as a major source for election news (61%) said fraud related to voting by mail was a major concern, compared with 36% of other Republicans.

By late November, with Trump and his allies trying multiple paths to overturn the election results, 73% of Republicans who turned to him as a major source of election news said allegations of voter fraud were getting too little attention. Among those Republicans who did not use the Trump campaign as a major source of news, the percentage who said the fraud charges were getting too little attention fell to just over half, at 55%.

Next: 3. Misinformation and competing views of reality abounded throughout 2020 Next Page → ← Prev Page