In March 2020, as the World Health Organization was declaring COVID-19 a global pandemic and its spread was accelerating in the U.S., Republicans and Democrats were paying similar levels of attention to news coverage of the outbreak.

At that time, 53% of Democrats (including those who lean Democratic) were following news of the pandemic very closely, as were nearly as many Republicans and Republican leaners (48%). But by late November, after the presidential election, a large partisan gap had developed. While about half of Democrats (47%) still reported that they were following coverage of the pandemic very closely, about three-in-ten Republicans (28%) said the same – a gap of 19 percentage points.

This finding fits a pattern seen in a series of surveys administered in 2020 as part of the Center’s American News Pathways project. Over time, Republicans’ responses shifted on a number of COVID-19-related issues. Generally speaking, they paid less attention to the coverage, became more critical of the media and grew more likely to say the pandemic was being exaggerated. They also appeared to adopt less favorable views of the Centers for Disease Control and Prevention (CDC) and other public health officials.

Conversely, Democrats’ responses on those issues – which in most cases differed from the Republicans’ – remained largely unchanged over time. 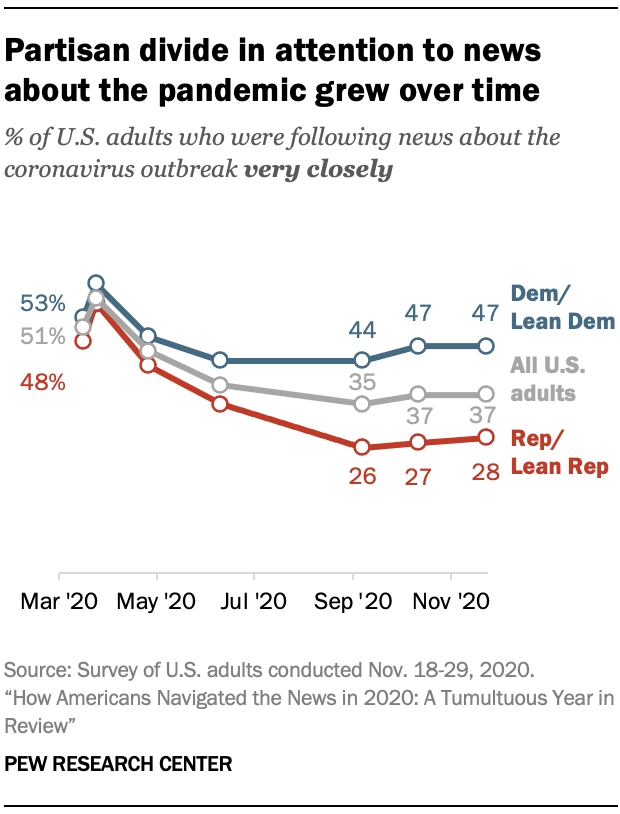 For Republicans, attention to news about the COVID-19 outbreak diminished throughout the year.

Democrats’ overall level of attention to COVID-19 news remained much steadier, with modest dips. From the 53% who were following coronavirus coverage very closely in March, the percentage fell slightly to 49% in April and registered at 44% in June and September. In October and November, about half of Democrats (47%) were following news about the outbreak very closely.

Takeaway #2: Over a period of six months, Republicans’ views of media coverage of the pandemic turned notably more critical

Many surveys have revealed that, in general, Republicans hold more negative views of the media and how journalists do their job than Democrats. That is also the case with assessments of pandemic coverage in 2020, although Republicans’ views of that coverage changed substantially more than Democrats’ over time.

Democrats (including Democratic leaners) offered much more positive – and consistent – assessments of the media’s performance. In March, 80% of Democrats said news organizations had done very well (35%) or somewhat well (44%) on the COVID-19 story. In September, the portion of Democrats saying the media had done at least somewhat well was still high, at 81%, although the share who said the media had done very well slipped slightly, to 28%.

When that question was first asked in late April, Republicans already were more inclined to say the pandemic had been overblown (47%) than to give any other response. But as the year went on, the percentage of Republicans saying the outbreak had been exaggerated jumped even higher, to 63% in June and 66% in September. In November, with coronavirus cases surging, the share of Republicans who saw the pandemic as overblown dropped, but most (58%) still took this position.

Once again, Democrats’ views on this issue were very different and more stable. Throughout the year, the vast majority of Democrats either said that the pandemic had been made into a smaller deal than it really was (ranging between 34% and 46%) or that it had been approached about right (between 40% and 48%). 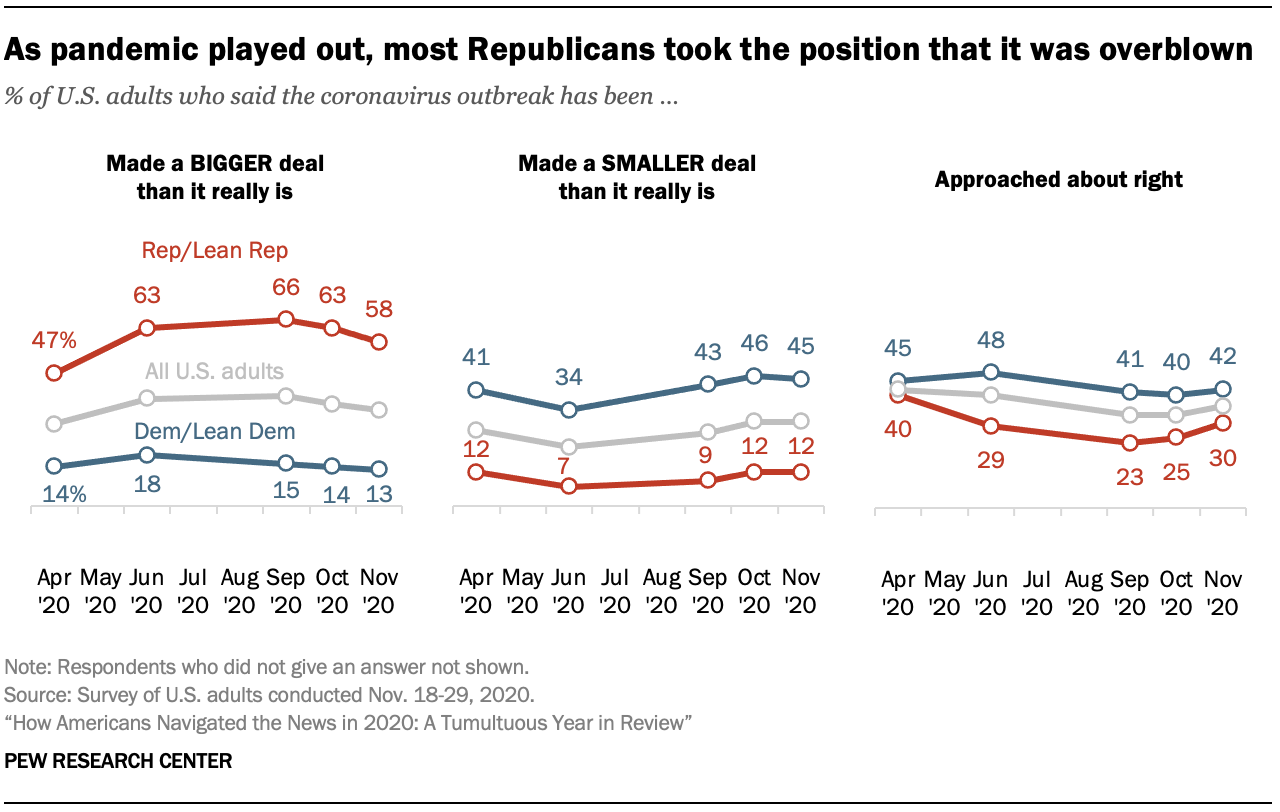 There also is some evidence that Republicans’ views of the coronavirus response by public health officials soured over time.

In mid-March 2020, about a quarter of Republicans (26%) said that public health officials at the CDC had “greatly” or “slightly” exaggerated the risks of the coronavirus outbreak. When asked again in late April, that percentage had grown to 38%.

Democrats, for their part, moved a bit in the opposite direction, with 16% saying public health officials had exaggerated the risks in March and that number dropping to 11% in April. 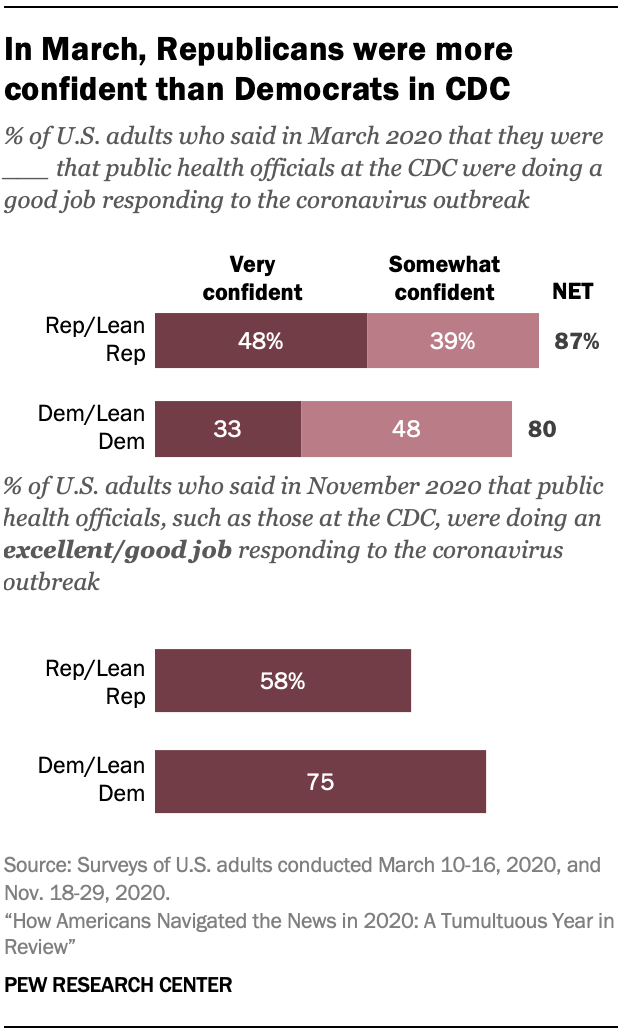 Similarly, back in March, fully 87% of Republicans said they were “very” or “somewhat” confident that public health officials at the CDC were doing a good job responding to the pandemic. That was even higher than the percentage of Democrats who agreed (80%) – with 48% of Republicans very confident, compared with 33% of Democrats. Within the GOP, confidence in the CDC was about on par with confidence that Donald Trump was doing a good job responding to the outbreak (82% were at least somewhat confident).

After the November elections, in a somewhat different question, respondents were asked to grade the job done by a number of key players in the pandemic. But by then, Republicans’ assessments were far more negative than Democrats’: 58% said public health officials such as those at the CDC had done an “excellent” or “good” job, compared with 75% of Democrats.