1. About a quarter of Republicans, Democrats consistently turned only to news outlets whose audiences aligned with them politically in 2020

At the outset of the election year, a Pew Research Center study found Democrats and Republicans increasingly relied on two divergent media ecosystems.

We look at which Americans had similar media diets in at least in at least two out of those three surveys.

The rest of this report looks at findings  from American News Pathways analyses from throughout the year, including analysis based on Americans’ media diets at the time of each survey.

See the Appendix for more details.

The new analysis in this chapter studies the sources Americans said they used for political and election news across three surveys – in November 2019, September 2020 and November 2020 – to explore those Republicans and Democrats who consistently got news only from outlets whose audiences shared their political views compared with those Republicans and Democrats who turned to news outlets with more politically diverse users.

Takeaway #1: About a quarter of Republicans and Democrats consistently turned to partisan news media bubbles

The study also reveals that 41% of Republicans and about a quarter of Democrats (27%) did not have either of these consistent media diets across the three surveys. Someone, for example, may have turned only to sources with right-leaning audiences in the November 2019 survey, but then relied on sources with a mix of audiences in September 2020 and didn’t turn to any major sources in November 2020. These Americans often did not use any of the major national sources asked about in the surveys and tended to follow major news storylines such as the COVID-19 outbreak and the 2020 election less closely than others. 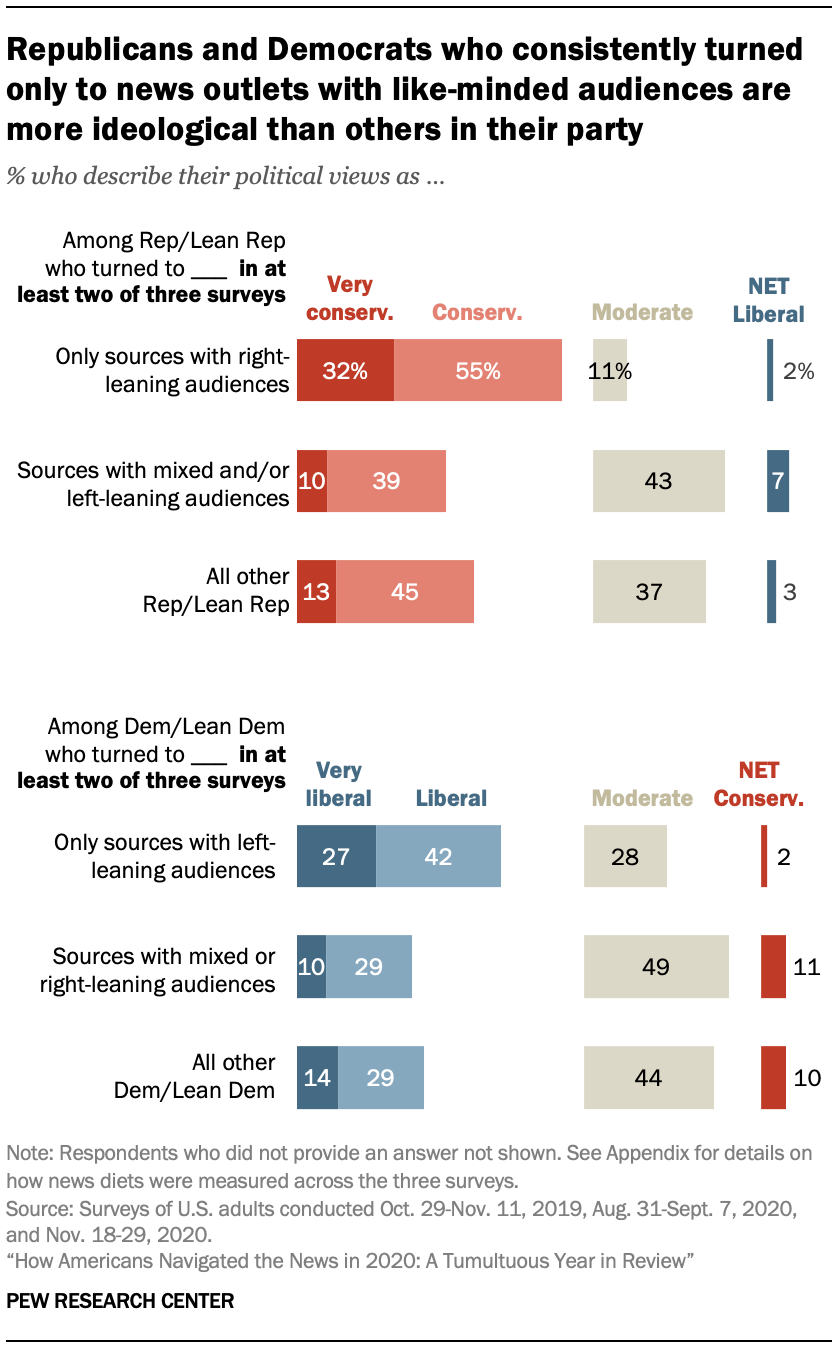 Republicans and Democrats who, during the 2020 presidential election, consistently got their political news only from major news outlets whose audiences share their political leanings are generally more ideological than others in their parties.

Similarly, the most liberal group of news media consumers among Democrats are those who consistently used only news outlets with left-leaning audiences: 70% say they are liberals, including about a quarter who are “very liberal” (27%). By contrast, only about a third of Democrats who consistently used news outlets with politically mixed or right-leaning audiences (39%) call their political views liberal; about half in this group say they are moderates (49%).

The study cannot speak to whether news consumption habits shape political ideology, or whether people with stronger ideologies tend to seek out news sources that are friendlier to their perspectives. Still, the data shows that there is a strong relationship between consistently using news outlets whose audiences share respondents’ politics and those respondents’ own political views.

Takeaway #3: Just under half of Republicans who turned only to outlets with like-minded audiences are 65 and older 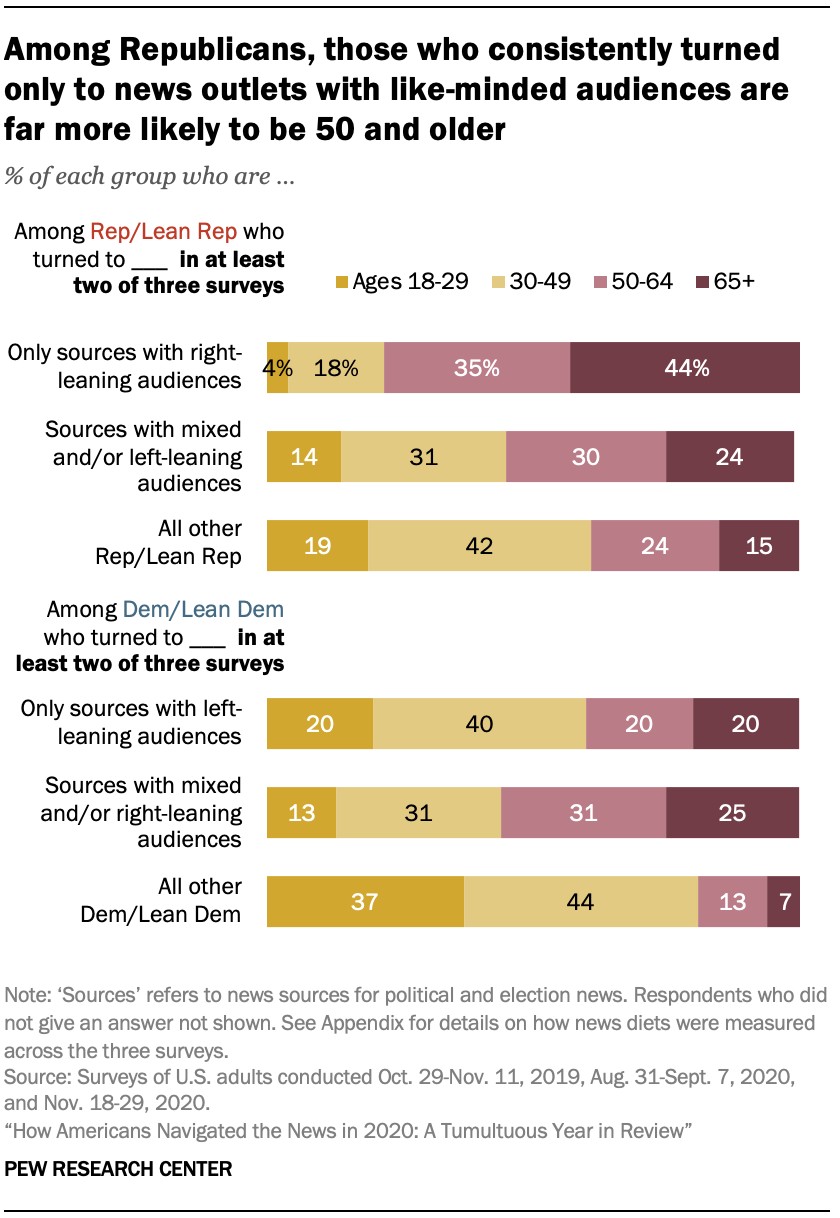 There are stark age differences among Republicans with different media diets. Republicans who consistently turned only to outlets with like-minded audiences are much older than the other groups: 79% are ages 50 and older, while just 4% of the group are 18 to 29.

Among Republicans who consistently turned to outlets with more mixed or left-leaning audiences, fewer are 50 and older (55%), while 14% range from 18 to 29.

Takeaway #4: Among Democrats, race and ethnicity and education vary across different media diets 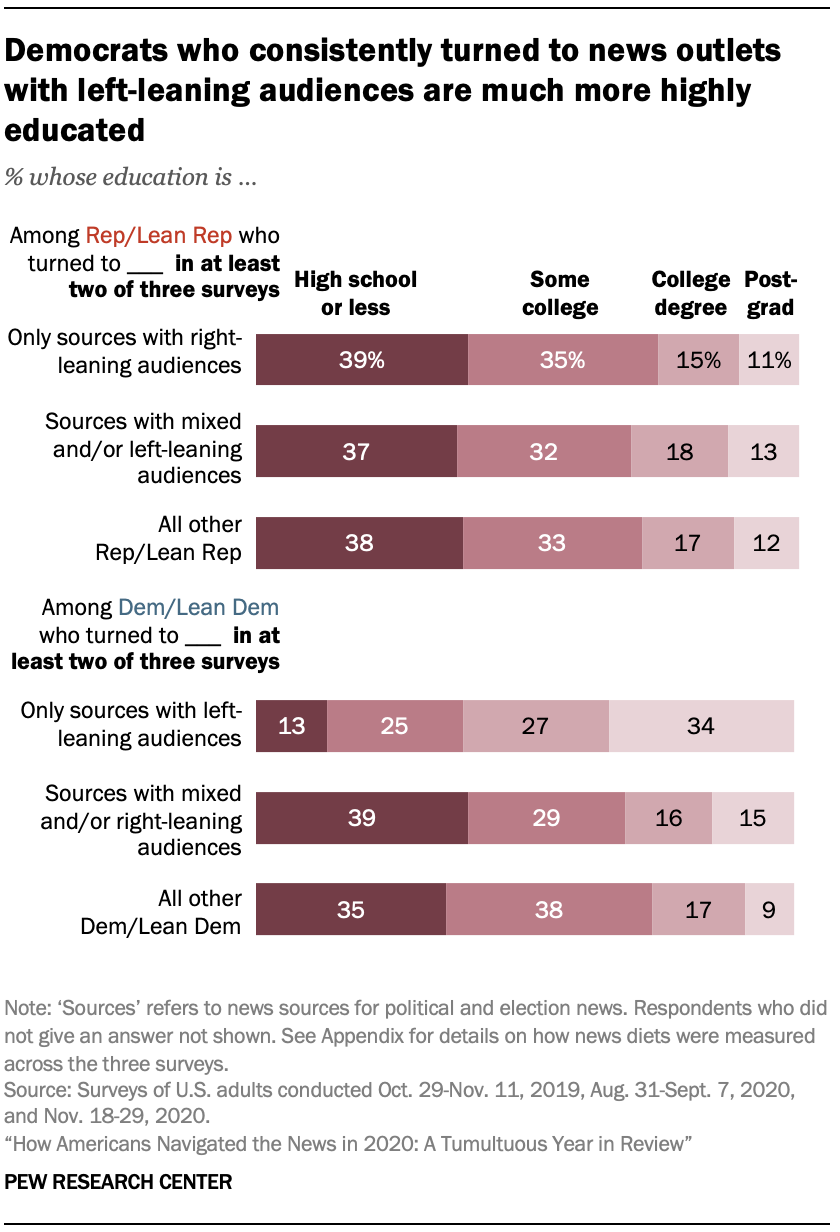 There is little difference among Republicans in educational attainment across these news consumption groupings. That is not the case, however, among Democrats.

Democrats who consistently used only news outlets with left-leaning audiences to get political news during the past year have much higher levels of education than Democrats with other news consumption habits. About six-in-ten U.S. adults in this group have college degrees, including about a third (34%) with postgraduate degrees. Among other Democrats, only about three-in-ten or fewer have completed college. 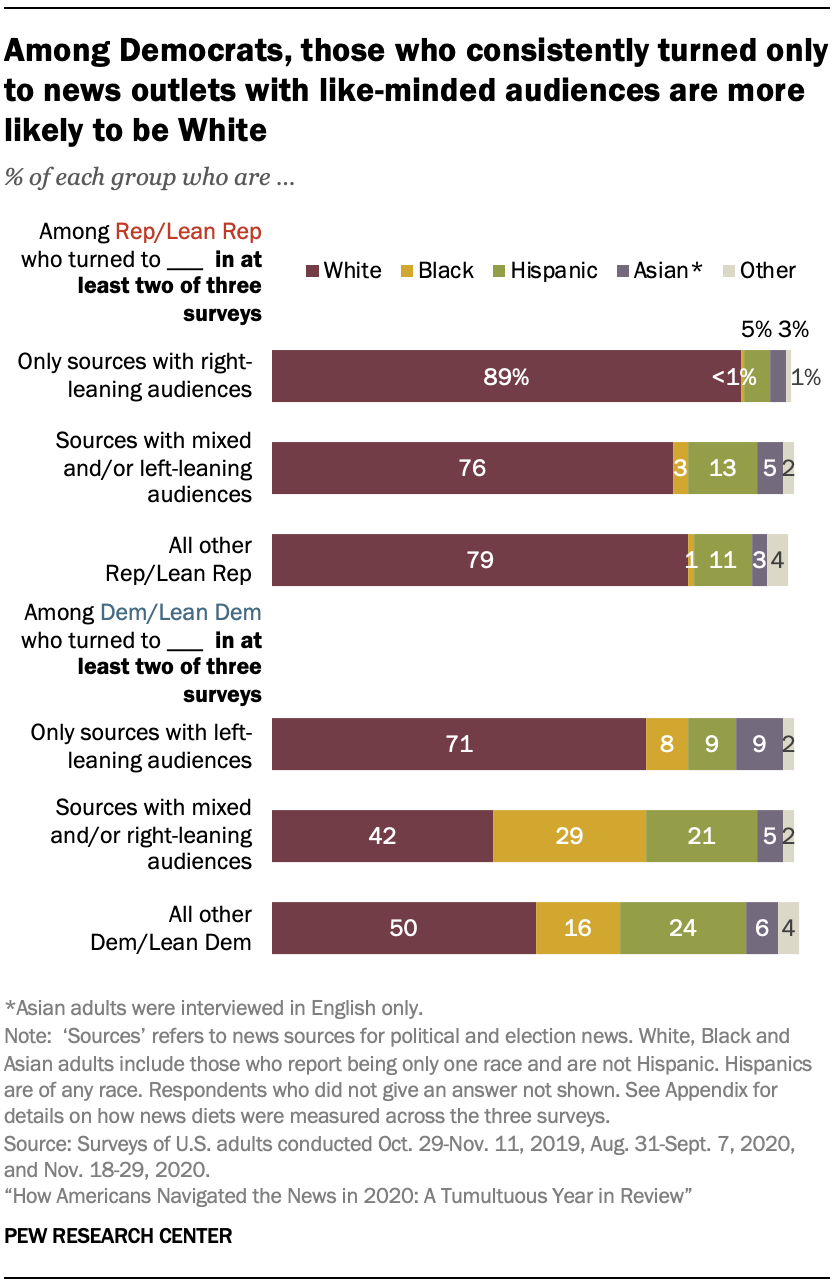 Among Republicans, large majorities of all the groups are White – reflecting the GOP’s composition overall.

Takeaway #5: Network TV news emerged as the one area of common ground between parties

Looking at the individual news sources within each media group in our study, Republicans and Democrats generally got political news from different outlets throughout the 2020 presidential election, with one notable exception. Sizable shares in both parties (43% of Democrats and 26% of Republicans) turned to network TV news in at least two of the three surveys conducted during the election.

Otherwise, the greatest share of Republicans who stuck with any of these outlets over the year were turning to Fox News (36%), followed by talk radio (17%). Much smaller portions (9% or fewer) of Republicans used any of the other five individual outlets asked about.

Conversely, only 11% of Democrats used Fox News in at least two of the three surveys, and an even smaller portion (1%) turned to talk radio consistently.

Next: 2. Republicans who relied on Trump for news in 2020 diverged from others in GOP in views of COVID-19, election Next Page → ← Prev Page