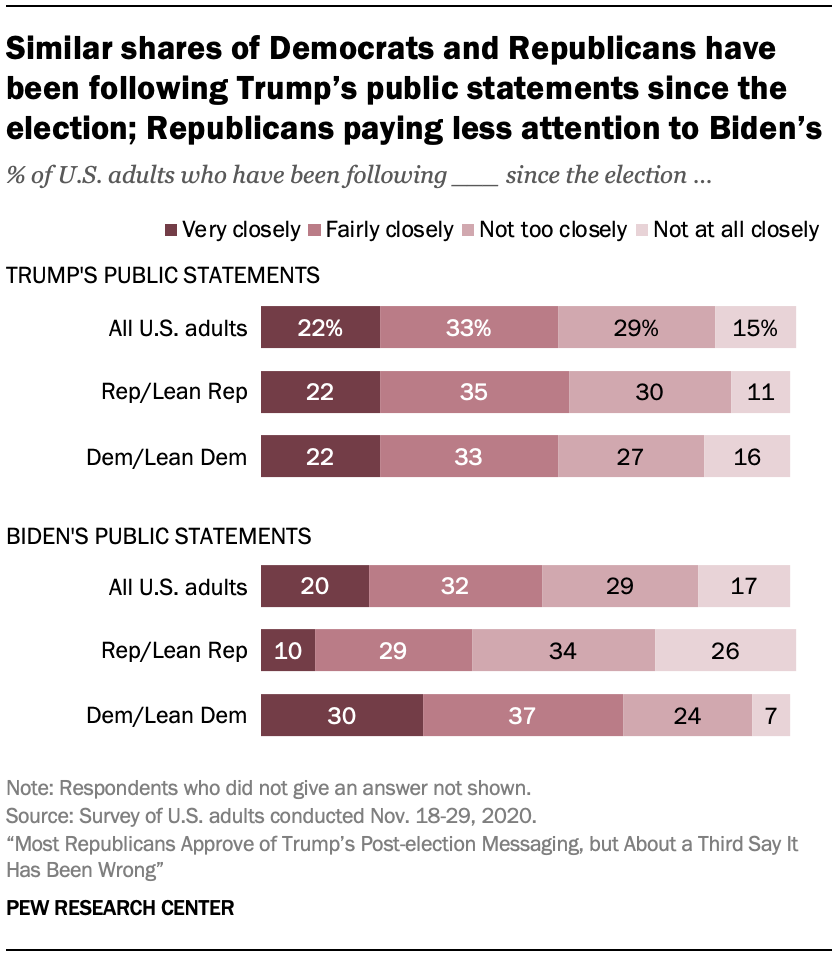 In the aftermath of Joe Biden’s victory in the 2020 presidential election – and President Donald Trump’s refusal to concede as of publication on Dec. 15 – slightly more than half of all Americans say they have been closely following the candidates’ public statements since the polls closed on Nov. 3.

But while members of both parties are paying about the same amount of attention to the statements from Trump, who continues to publicly challenge the election, there is a significant partisan difference in the level of attention to statements by President-elect Biden, who has been assembling and announcing his new administration.

Overall, 55% of U.S. adults say they have been following Trump’s post-election statements “very” or “fairly” closely, with attention about evenly distributed among Republicans (58%) and Democrats (56%). About the same portion of U.S. adults (53%) say they’ve been following Biden’s statements very or fairly closely. But in this case, there is a major gap between Republicans (39% very or fairly closely following) and Democrats (67%).

There also are wide gaps in how the two candidates’ messages are being evaluated. About one-third (34%) of all Americans say Trump has been delivering a “completely” or “mostly” right message to the country since the election; 64% say it has been completely or mostly wrong. The numbers are reversed for Biden, with about two-thirds (63%) saying he has generally been delivering the right message and 34% saying it has been mostly or completely wrong.

This is not the first time this year that Americans overall have expressed negative views about Trump’s messaging on key events. In an early September survey, 57% said he had been delivering a completely or mostly wrong message to the country about the coronavirus pandemic. And in a survey in early June, 60% said he had been delivering the wrong message in response to the demonstrations that followed the police killing of George Floyd. 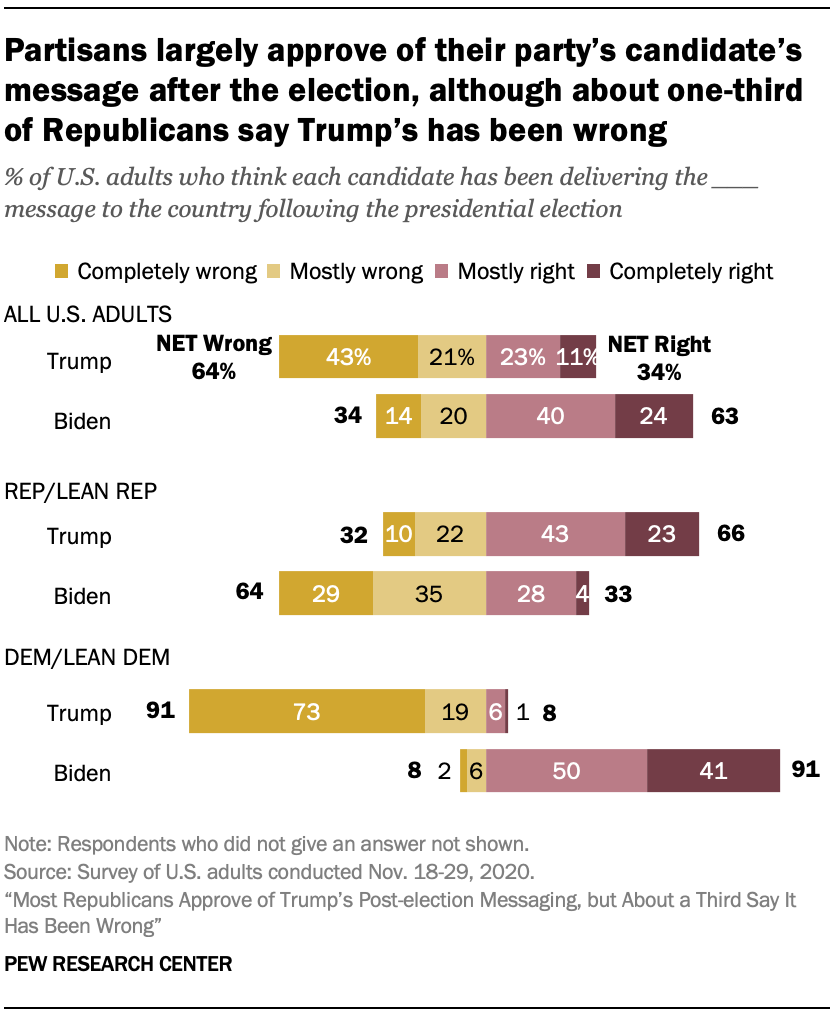 Specifically, among Republicans and those who lean Republican, 66% say Trump’s message has been completely or mostly right, while 32% say it has been mostly or completely wrong. And while the majority of Republicans (64%) disapprove of Biden’s message, 33% express approval – about the same portion who disapprove of Trump’s public statements.

Who are the Republicans who most disapprove of Trump’s messaging since the polls have closed?

One of the clearest dividing lines among Republicans on this issue is their ideology within the party. Republicans who describe their political ideology as moderate or liberal are far more likely to disapprove of Trump’s messaging than conservative Republicans (51% vs. 20%).

And while they make up only a small part of the GOP overall, just under half of Hispanic Republicans (45%) say Trump’s message has been mostly or completely wrong.

There also are significant gaps in Republicans’ views of Trump’s messaging based on which media sources they turn to most. The American News Pathways project asked respondents about eight major news sources that they may have used after polls closed on Election Day, and Republicans are divided into three main groups: those who say only sources with conservative-leaning audiences (Fox News and talk radio) are among their major sources for news after the election; those who rely on a mix of sources that include Fox News and/or talk radio and other outlets; and those who rely only on sources that do not include either Fox News or talk radio (i.e., sources with left-leaning or politically mixed audiences). There also is a fourth group that uses none of the eight major sources asked about (see Appendix for details). 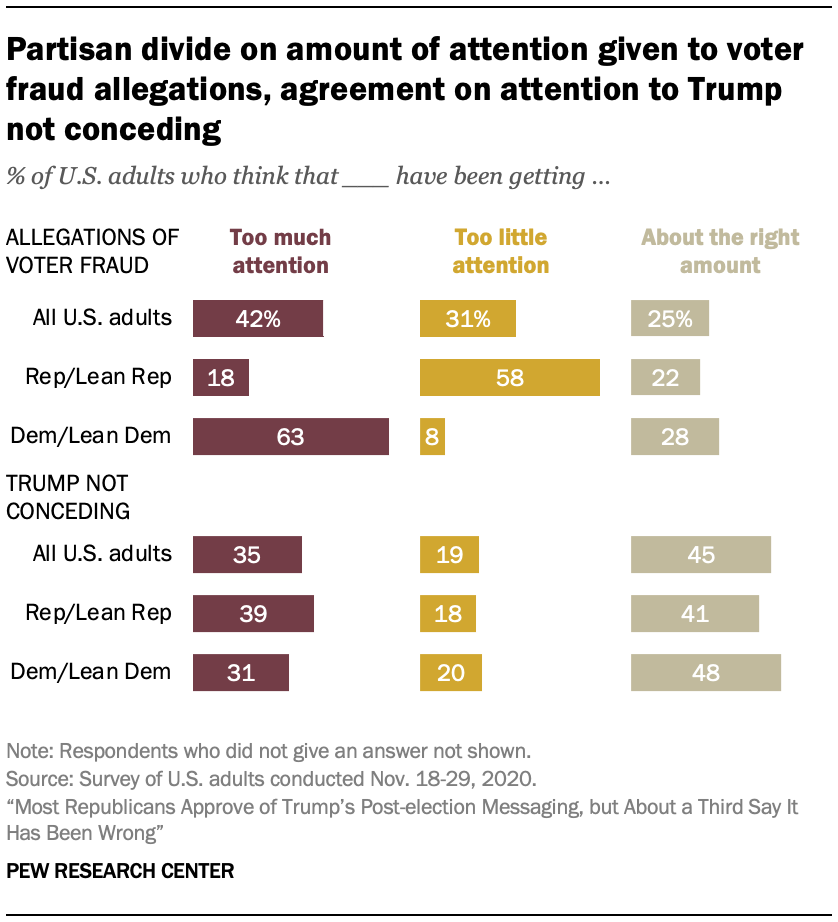 Since the polls closed on Nov. 3, Trump’s central message has featured allegations that the results were tainted by voter fraud – despite no credible evidence of such widespread fraud. There are clear differences between the parties on how much attention those allegations warrant.

More than half of Republicans (58%) say those allegations have received too little attention, while about one-in-five (18%) say they have received too much and 22% say the level of attention has been about right. On the other hand, nearly two-thirds of Democrats (63%) say the allegations have gotten too much attention, with only 8% saying they have not received enough and 28% saying it’s been about right.

A question about Trump’s refusal to publicly concede to Biden (as of publication on Dec. 15) generated substantially more bipartisan agreement – 39% of Republicans and 31% of Democrats say this has generated too much attention.  And pluralities in both parties – 41% among Republicans and 48% among Democrats – say that storyline has gotten about the right amount of attention. 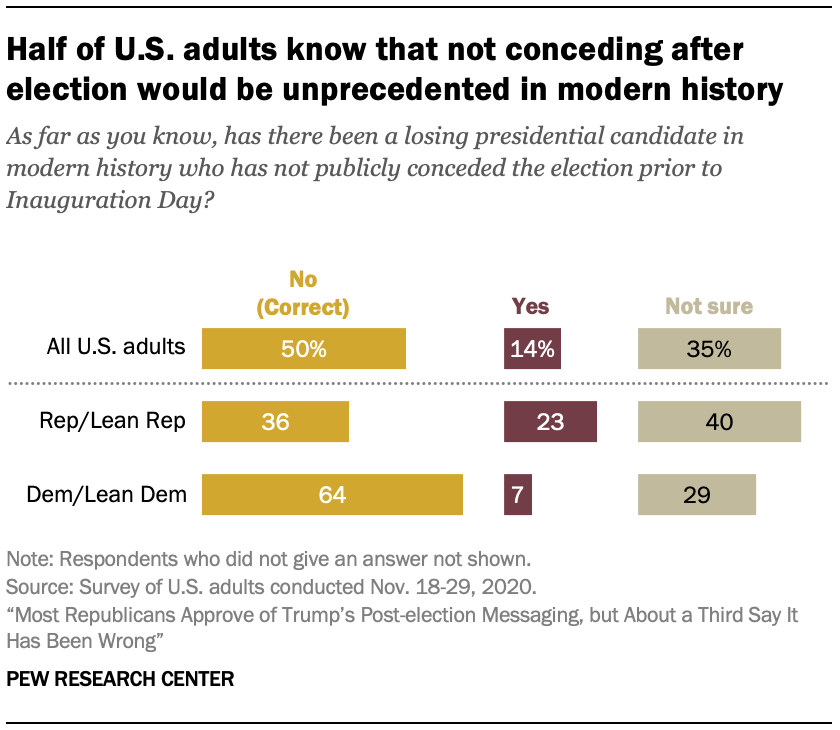 Beneath this rare occurrence of partisan agreement, however, are differences in people’s sense of how unusual it is for the losing candidate not to concede. Asked whether there had been a losing presidential candidate in modern history who had not publicly conceded before Inauguration Day, about one-third of Republicans (36%) answer correctly that this has not happened, compared with nearly twice as many Democrats (64%). Instead, Republicans are more likely to say either that it had occurred (23% vs. 7% among Democrats) or that they are not sure (40% vs. 29%).

Next: 2. Americans generally approve of their news sources’ election coverage, but Republicans less so than Democrats Next Page → ← Prev Page