Pew Research Center’s American News Pathways project conducted this study to understand how Americans are engaging with and perceiving news coverage of the 2020 presidential election.

For this analysis, we surveyed 11,818 U.S. adults between Nov. 12-17, 2020. Everyone who completed the survey is a member of Pew Research Center’s American Trends Panel (ATP), an online survey panel that is recruited through national, random sampling of residential addresses. This way nearly all U.S. adults have a chance of selection. The survey is weighted to be representative of the U.S. adult population by gender, race, ethnicity, partisan affiliation, education and other categories. Read more about the ATP’s methodology.

As election returns rolled in – albeit more slowly than in recent years – Americans were tuning in closely. They also, for the most part, gave their news sources positive marks for the coverage of the returns, though Republicans were less likely to do so than Democrats. 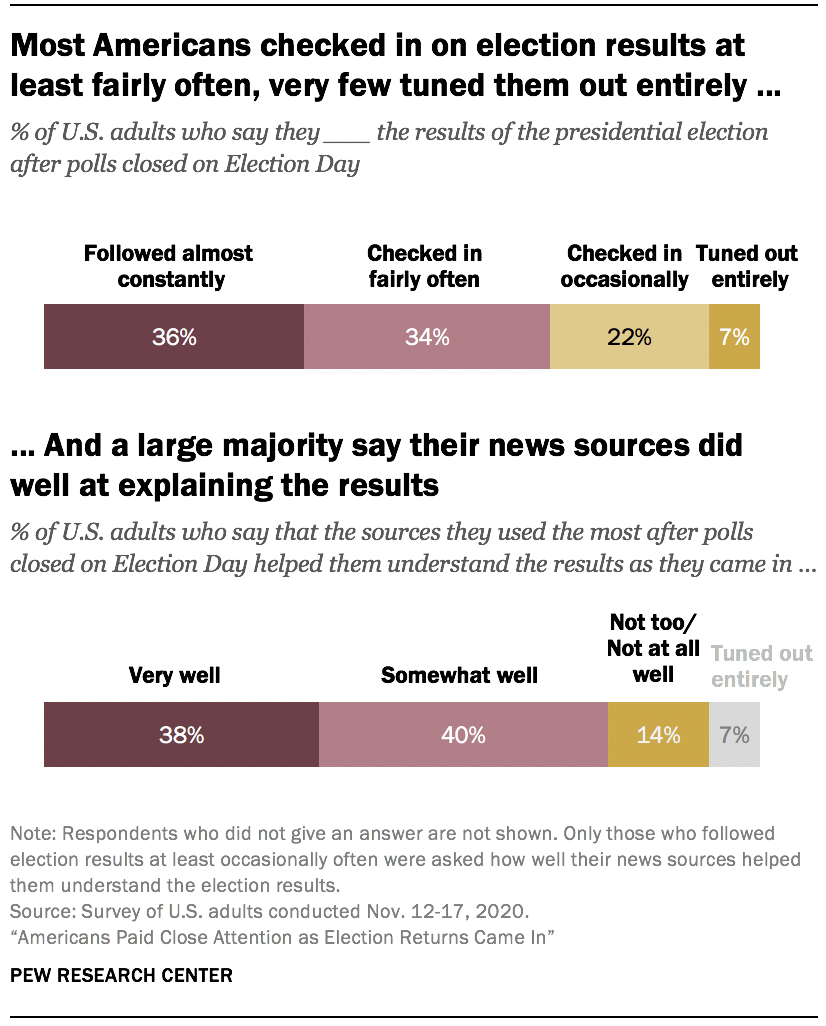 About a third of U.S. adults (36%) say they followed the results of the presidential election “almost constantly,” according a Pew Research Center survey of 11,818 U.S. adults conducted Nov. 12-17, 2020, as a part of the Center’s American News Pathways project. Another 34% say they checked in fairly often, while about two-in-ten (22%) did so occasionally. Just 7% of Americans say they tuned out the results entirely. What’s more, about four-in-ten U.S. adults (38%) say the sources they turned to most did very well in helping them understand the results after polls closed. A similar portion (40%) say they did somewhat well, for a total of 77% who gave positive marks. Only 14% say their most turned-to sources for election results did not too or not very well. 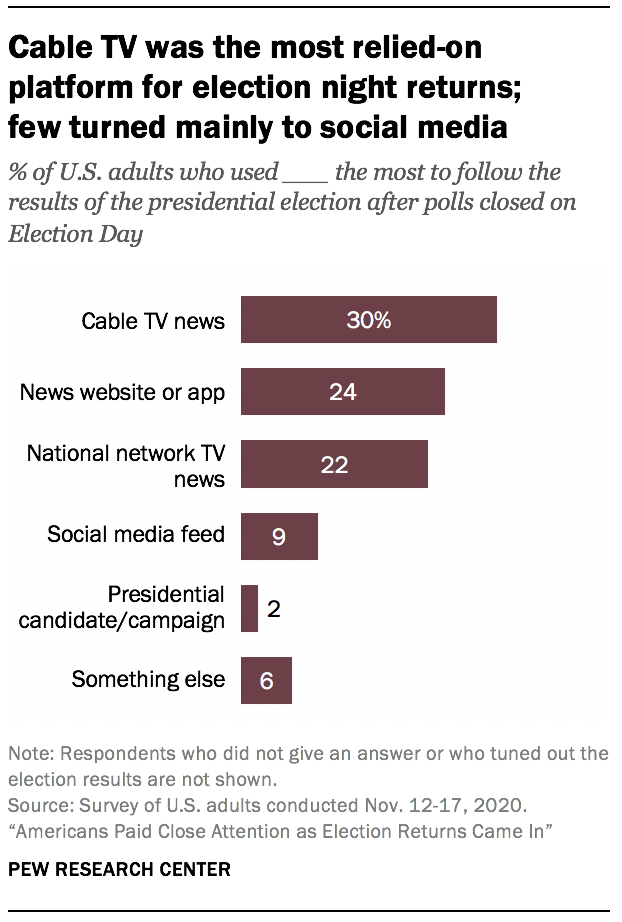 Cable TV was the most relied-on platform for election night news among those asked about, with news websites and apps and network TV the next most likely places to turn. Three-in-ten Americans say that in following the results, they turned most to cable TV. About a quarter (24%) say they turned most to news websites or apps while about two-in-ten (22%) relied most on network TV. Only 9% say they turned most to their social media feeds – a platform that some were concerned would serve as a place for misinformation and conspiracy theories to spread. A mere 2% focused most on what the candidates and their campaigns had to say, while 6% say they mostly turned somewhere else. 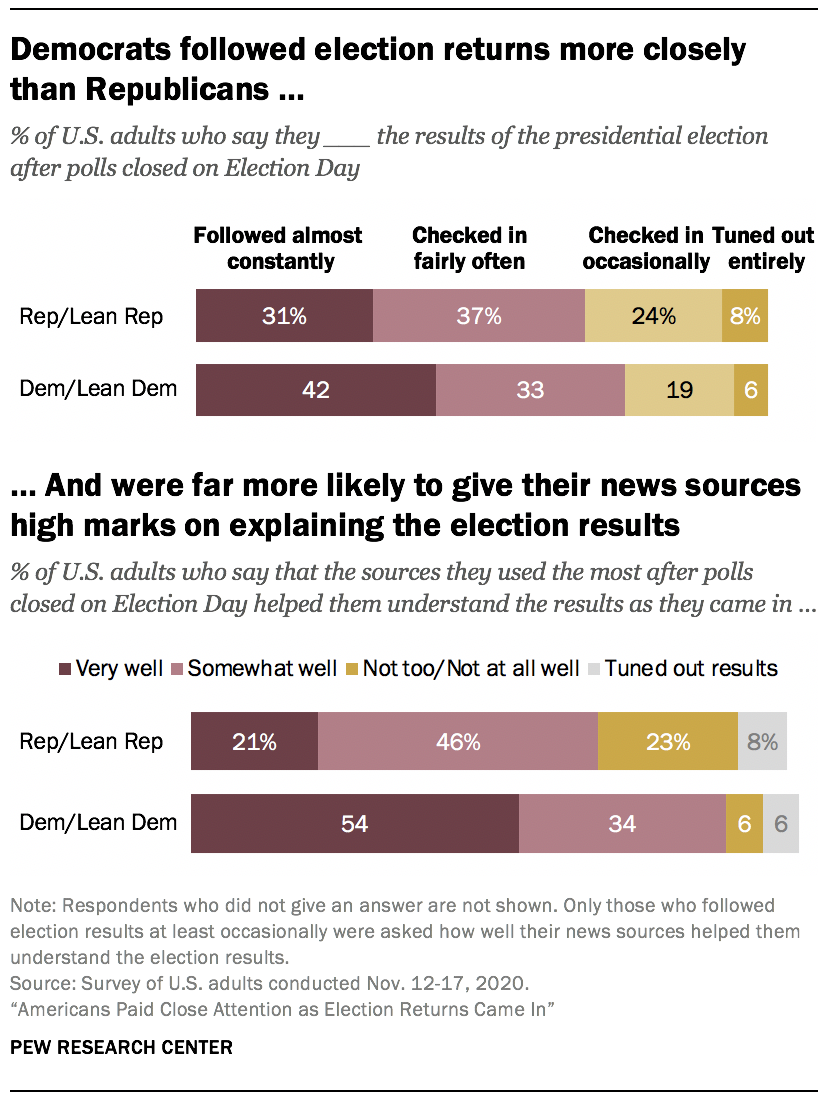 Democrats followed the presidential election returns somewhat more closely than Republicans: 42% of Democrats and independents who lean Democratic followed them almost constantly once polls closed, versus 31% of Republicans and Republican leaners. Republicans were more likely to check in fairly often or occasionally, while few in either party tuned them out entirely.

Partisans’ use of different pathways to keep up with returns was generally similar, but differences emerge in how well each side of the aisle say their sources did in explaining those results. Republicans expressed far less satisfaction with their news sources than did Democrats – in line with previous findings that Republicans tend to be less satisfied and more distrusting of the media in general. While a solid majority of Democrats (54%) say their most turned-to sources did a very good job of helping them understand the results, the same is true of just 21% of Republicans. Instead, 46% of Republicans say their sources did “somewhat well,” while about a quarter (23%) say their sources did not too or not at all well in helping them understand the results. Just 6% of Democrats offered a negative assessment of their news sources.

Some portion of the Republican dissatisfaction could be tied to the fact that the returns showed Joe Biden leading in electoral votes. One media-related controversy that emerged election night was over the fact that Fox News – which 33% of Republicans say is a major source of political news – called Biden the winner in Arizona not long after 11 p.m. Eastern in a close race that most news organizations waited several days to call. Indeed, the Republicans who say that Fox News is a major source for political news are slightly more likely than other Republicans to say that their news sources did a poor job of helping them understand the election night results – 28% of these Republicans say this, compared with 21% of Republicans who do not say Fox News is a major source of news for them. However, the difference between the two parties is much wider, so possible dissatisfaction with individual news sources does not seem to be the main driver of partisan difference.

These are some of the findings of this survey conducted from Nov. 12-17. Major news outlets called the race for Biden on Nov. 7, and in the days that followed, Donald Trump’s campaign continued filing lawsuits in battleground statesand he continued to call the results fraudulent. As of this publication date, many of the Trump campaign’s legal challenges have largely been unsuccessful in court.

Next: 1. A majority of Americans say they followed election results at least occasionally on election night Next Page → ← Prev Page