2. Interest in election news increases, with most Americans feeling worn out by the volume of coverage 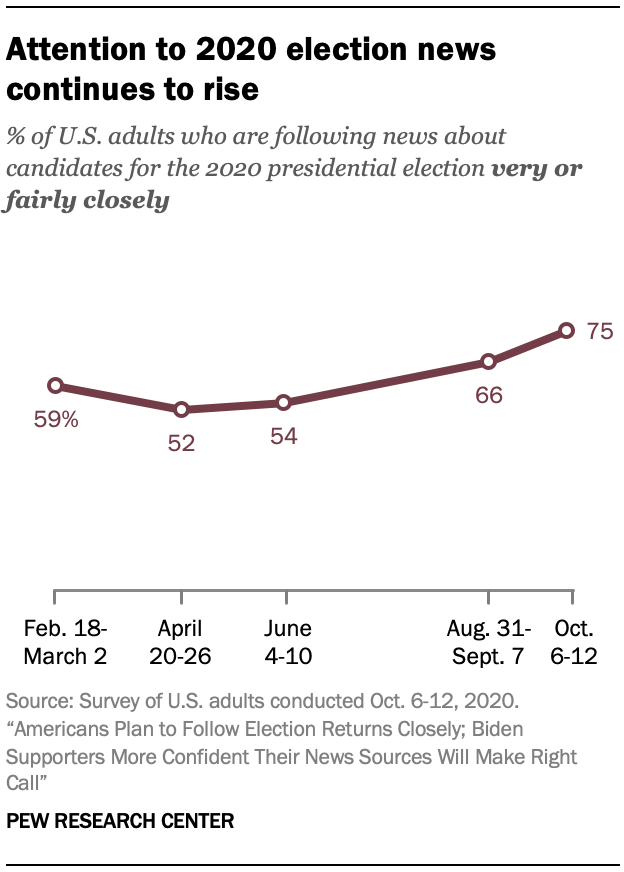 Interest in the 2020 election has increased over the last month. Three-quarters of U.S. adults now say they are following news about candidates for the presidential election “very” or “fairly” closely, including 39% who are doing so very closely. That is up about 10 percentage points from early September, when 66% said the same. Attention to the election is now roughly on par with interest in news about the coronavirus outbreak, which 79% now say they are following fairly or very closely. It does still trail the height of interest in COVID-19 news in late March, when 92% said they were following it closely and nearly six-in-ten were following it very closely.

Interest in election news is high among both Trump and Biden supporters. About half of registered voters who support Trump (49%) and Biden (53%) say they are following election news very closely. 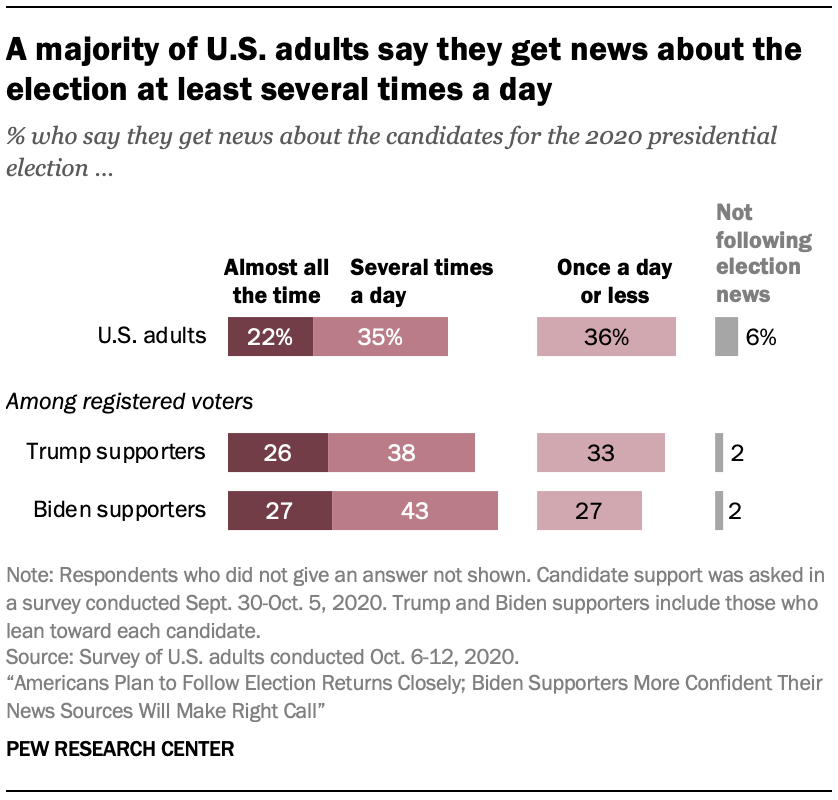 Increased attention to election news coincides with people getting many updates throughout the day. About six-in-ten U.S. adults (57%) say they are getting news about the candidates at least several times a day, with about two-in-ten (22%) who do so almost all the time.

The frequency of updates is very consistent across Trump and Biden supporters, with about a quarter of registered voters in each group getting updates almost all the time and majorities doing so at least several times a day.

One area of difference between these groups of supporters is in the level of weariness brought on by keeping up with the news. About two-thirds of Trump supporters (65%) say they are worn out by so much coverage. That compares to just over half of Biden supporters (54%) who are worn out, while 44% say they like a lot of attention on the election.

Overall, about six-in-ten Americans (61%) say they are worn out by so much coverage of the 2020 presidential election.

Trump supporters are also more likely than Biden supporters to say they are finding it difficult to determine what is true and what is not about the presidential campaign.

Biden supporters more likely to discuss the election with others, stop talking to someone because of something they said

Americans are frequently talking about the upcoming election with others, with Biden supporters more likely to be doing so than those who are planning to vote for Trump.

About a quarter (24%) of U.S. adults say the 2020 presidential election comes up in conversation “very often,” while another 39% say it comes up “somewhat often.” Just 9% say the election does not come up in their conversations at all.

The topic of conversation is somewhat more frequent among registered voters who say they support Biden for president than among those who support Trump. A third of Biden supporters say the topic comes up very often compared with about a quarter (24%) of Trump supporters.

Even as Biden supporters discuss the 2020 election more frequently, they are also more likely than Trump supporters to cut off conversation about political and election news with someone because of something they said. 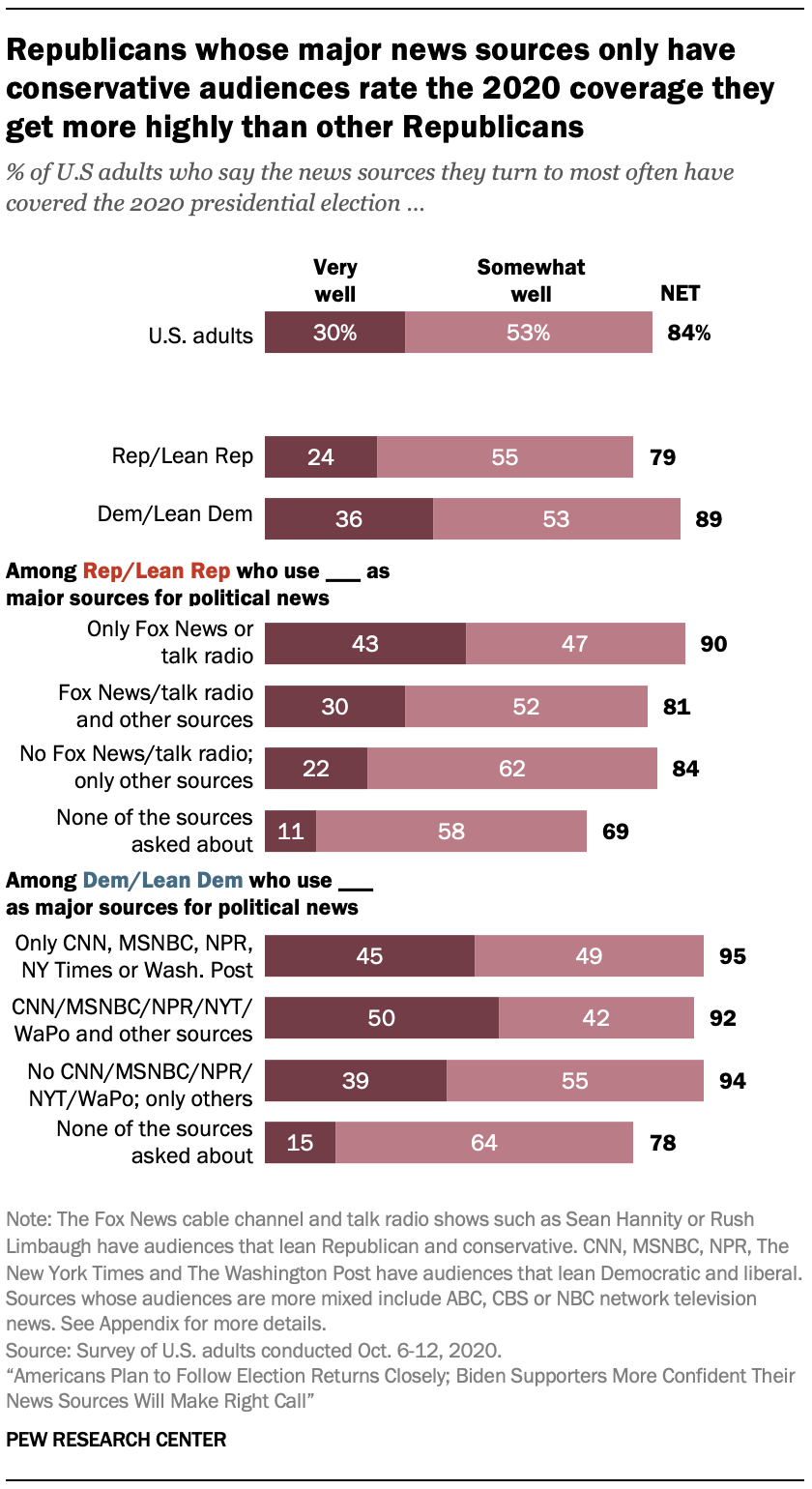 Democrats and independents who lean toward the Democratic Party give the news sources they turn to most higher marks for their coverage than do Republicans and Republican-leaning independents.

Nearly four-in-ten Democrats (36%) say their most-used news sources have covered the election very well, compared with about a quarter of Republicans (24%) who say the same. Roughly similar shares of Republicans and Democrats say the outlets they commonly use have done somewhat well (55% and 53%, respectively).

Respondents indicated on a previous survey whether each of eight news providers was a major source of political and election news for them. Researchers then grouped these responses based on the political composition of the outlets’ audiences. For example, Republicans were analyzed based on the degree to which they get political news from the outlets with conservative-leaning audiences (specifically, Fox News and talk radio), and Democrats were categorized based on the degree to which they get news from the outlets with liberal-leaning audiences – CNN, MSNBC, NPR, The New York Times and The Washington Post. (The eighth source, national network TV such as ABC, CBS or NBC, has an audience that does not lean strongly in either direction; see the Appendix[LINK] for more details about how respondents were grouped by their major news sources.)

There is less of a clear pattern among Democrats, with only modest differences in assessments of coverage between those who use outlets with left-leaning audiences and those who do not. Again, Democrats who do not use any of the eight news sources asked about are generally the most negative overall. 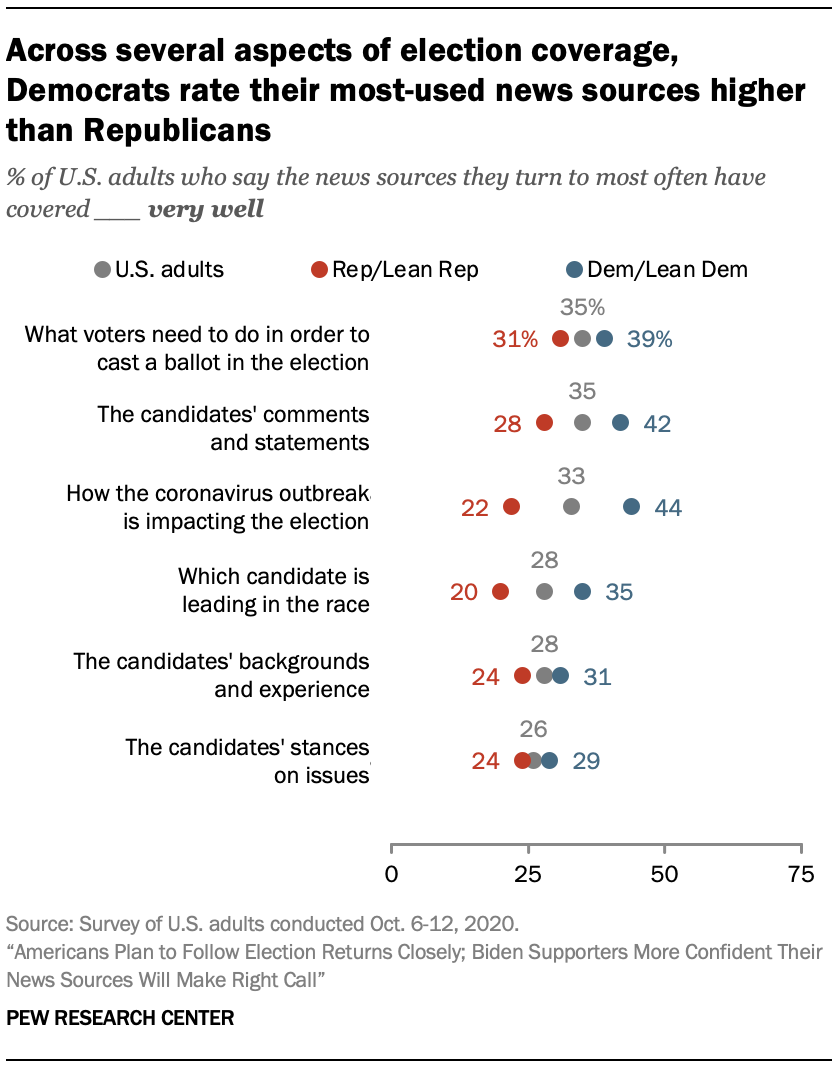 One of the largest gaps between Republicans and Democrats is for the coverage in their most commonly used outlets of how the coronavirus outbreak is impacting the election. Slightly more than four-in-ten Democrats (44%) say their news outlets have covered this topic very well, compared with half as many Republicans (22%).

Additionally, there is a 15 percentage point gap between the shares of Republicans (20%) and Democrats (35%) who say the news outlets they use most have done very well covering which candidate is leading in the race, as well as a 14-point gap in shares saying the candidates’ comments and statements have been covered very well (42% of Democrats vs. 28% of Republicans). The partisan gaps are more modest (about 10 points or less) on the other three items, including what voters need to do in order to cast a ballot, the candidates’ backgrounds and experience, and the candidates’ stances on the issues.

Media diet within party is linked with differences here as well, though of a different nature. Among both Republicans and Democrats (including leaners in both parties), those who give their commonly used media sources the lowest marks are generally those who use news outlets with audiences that do not align with their personal political views. 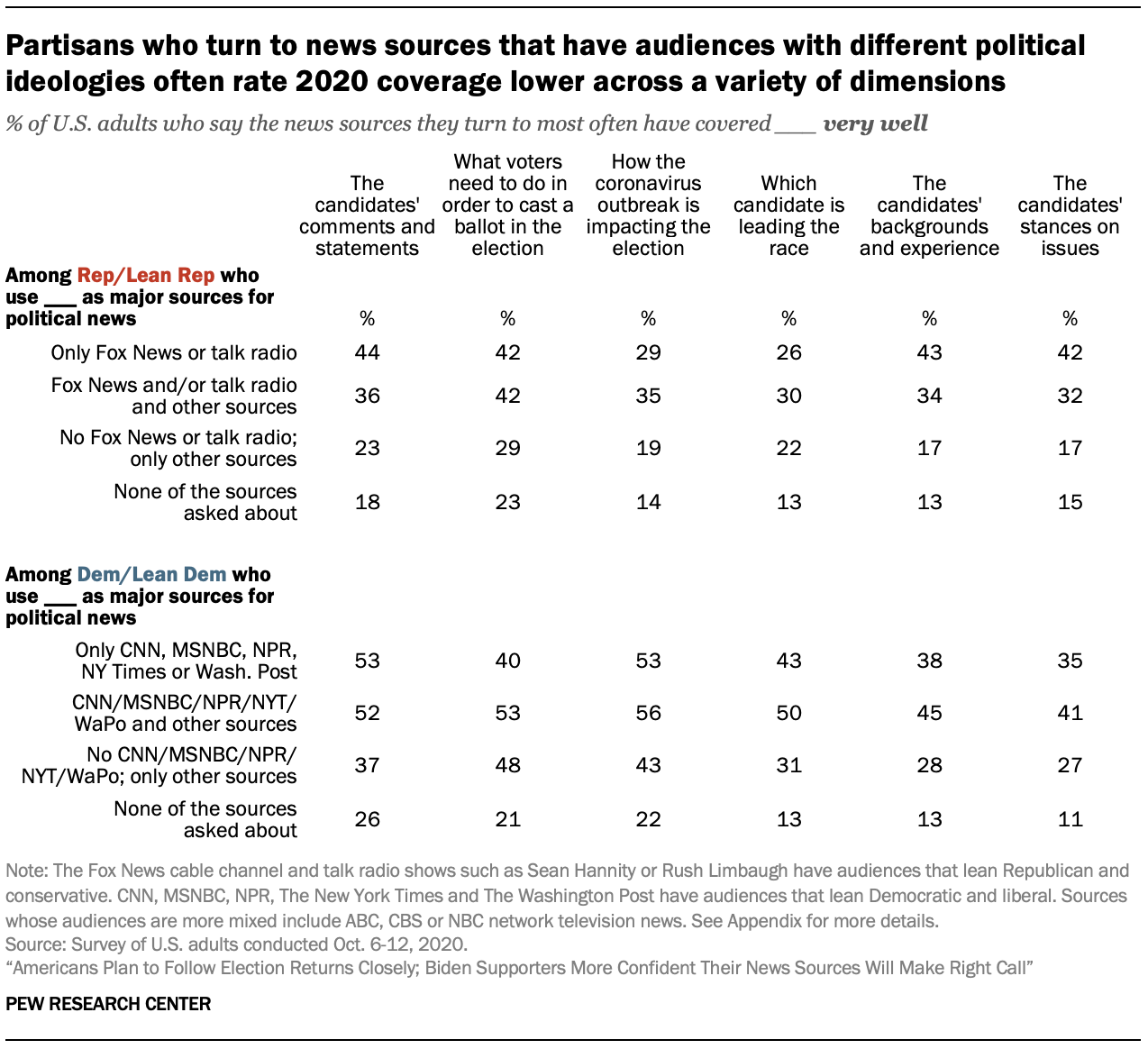 The two groups who turn to none of the major sources asked about tend to be the most negative groups on most of these measures.

Next: 3. As COVID-19 hits Trump and White House, slight shift in opinion on whether the outbreak has been exaggerated Next Page → ← Prev Page