Vote preference among registered voters in this report comes from a survey conducted Sept. 30-Oct. 5, 2020, among 10,543 registered voters. Of these registered voters, 8,501 also took the survey conducted Oct. 6-12 that is analyzed in this report. The initial survey asked U.S. citizens: “If the 2020 presidential election were being held today, would you vote for…” and gave the options of “Donald Trump, the Republican,” “Joe Biden, the Democrat,” “Jo Jorgensen, the Libertarian Party candidate,” “Howie Hawkins, the Green Party candidate” (in states where he appears on the ballot) and “vote for none/other.” Respondents who selected “vote for none/Other” or who skipped the first question were asked a follow-up question, “As of TODAY, do you…,” and then given the option to indicate if they “lean more toward” any of the candidates included in the first question.

For more about these questions on vote preference in the 2020 presidential election, see this report. 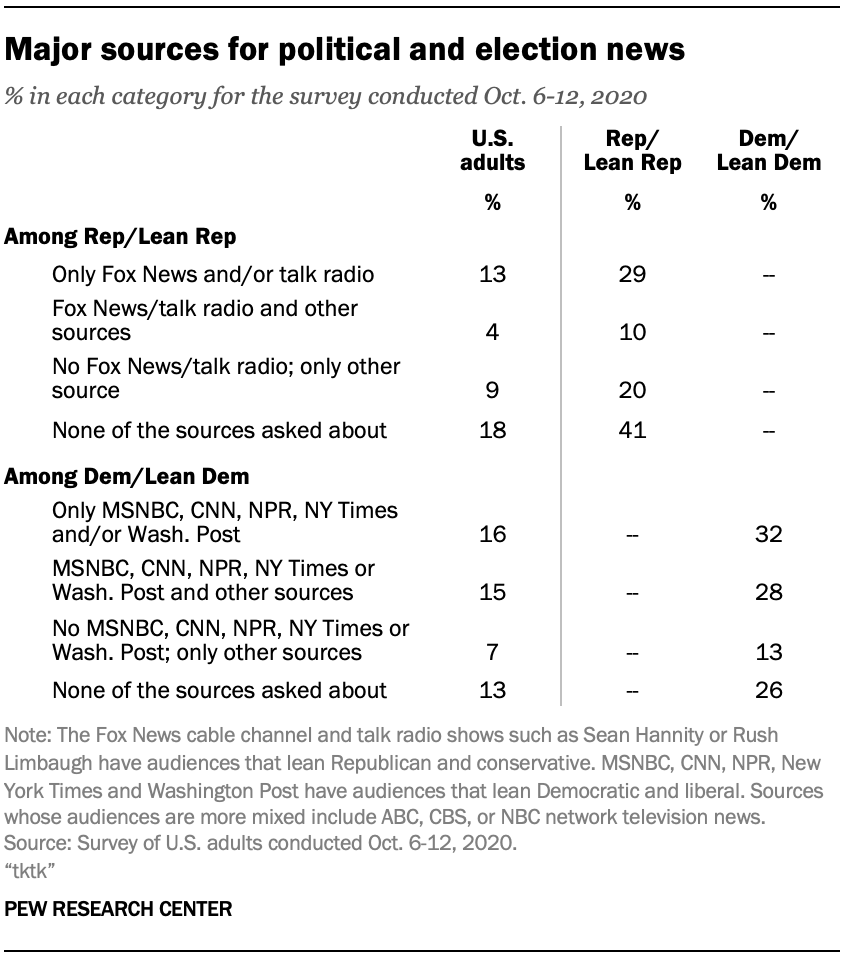 A survey conducted Aug. 31-Sept. 7, 2020, asked whether respondents use any of eight news sources as a major source, minor source or not a source for political and election news. (Responses for all eight sources are available here.) The sources identified as major sources were combined with the respondents’ partisanship to identify those who get news from only sources with audiences that lean toward their party (i.e., Republicans who get news only from sources with right-leaning audiences and Democrats who only get news from sources with left-leaning audiences) or another mix of sources. Those who do not use any of the eight sources asked about as a major source for political and election news are in a separate category. Researchers merged the responses to these questions from late August and early September to the survey data collected Oct. 6-12, 2020.

The eight sources asked about were then classified according to the political partisanship and ideology of their audiences. For this analysis, respondents who call each source a “major source” for political and election news are considered part of its audience.

Respondents who did not complete the survey conducted Aug. 31-Sept. 7, 2020 are not included in the analysis using these media habits.