3. As COVID-19 hits Trump and White House, slight shift in opinion on whether the outbreak has been exaggerated 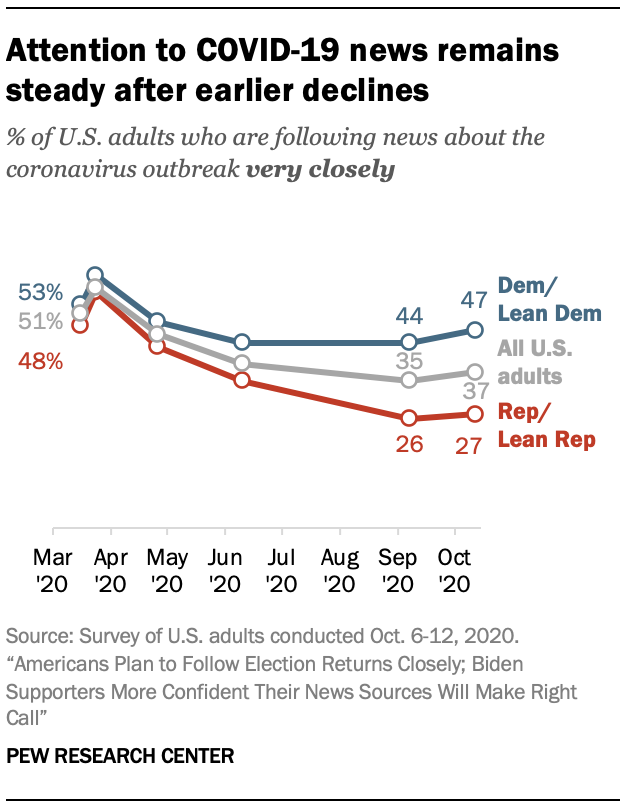 Among all U.S. adults, 37% say they are very closely following coronavirus news, about on par with the 35% who said they were doing so in early September. The new survey was conducted after news of President Donald Trump and the first lady testing positive broke on Oct. 2, with news of other administration officials testing positive becoming public within days of Trump’s diagnosis.

These findings show at least a pause to a steady trend of diminishing interest in coronavirus news over time. The portion of Americans very closely following coronavirus news fell from 57% at the outset of the pandemic in the U.S. in late March to 46% in late April, 39% in early June, and 35% in early September before registering most recently at 37%. 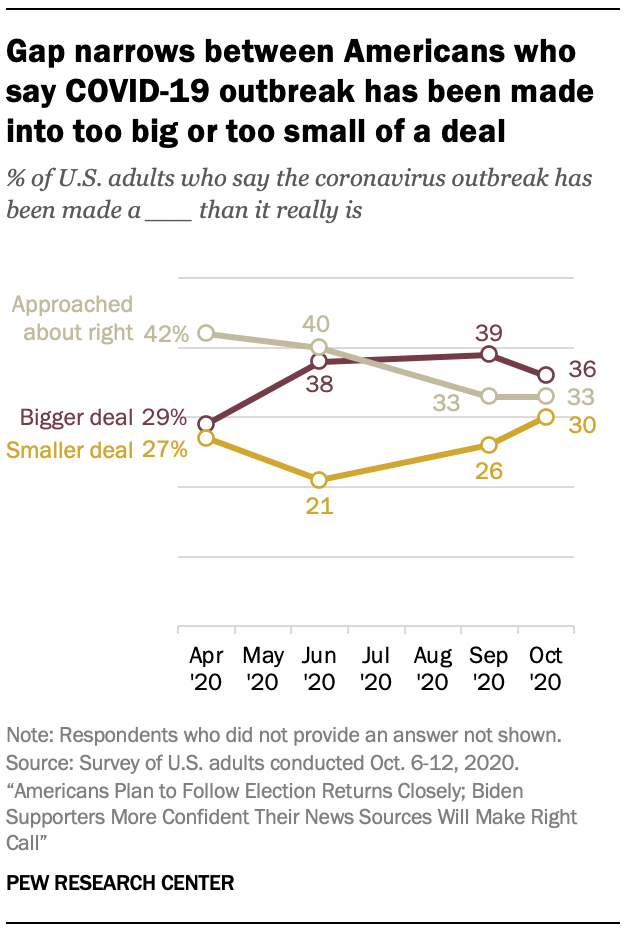 In this most recent survey, there is major partisan disagreement on this subject, with 63% of Republicans saying the outbreak has been overblown, compared with 14% of Democrats who share this view. Meanwhile, 46% of Democrats say the pandemic has been underplayed; just 12% of Republicans say the same. These partisan divides are nearly the same as they were just prior to Trump’s infection; neither party’s responses changed substantially since September. 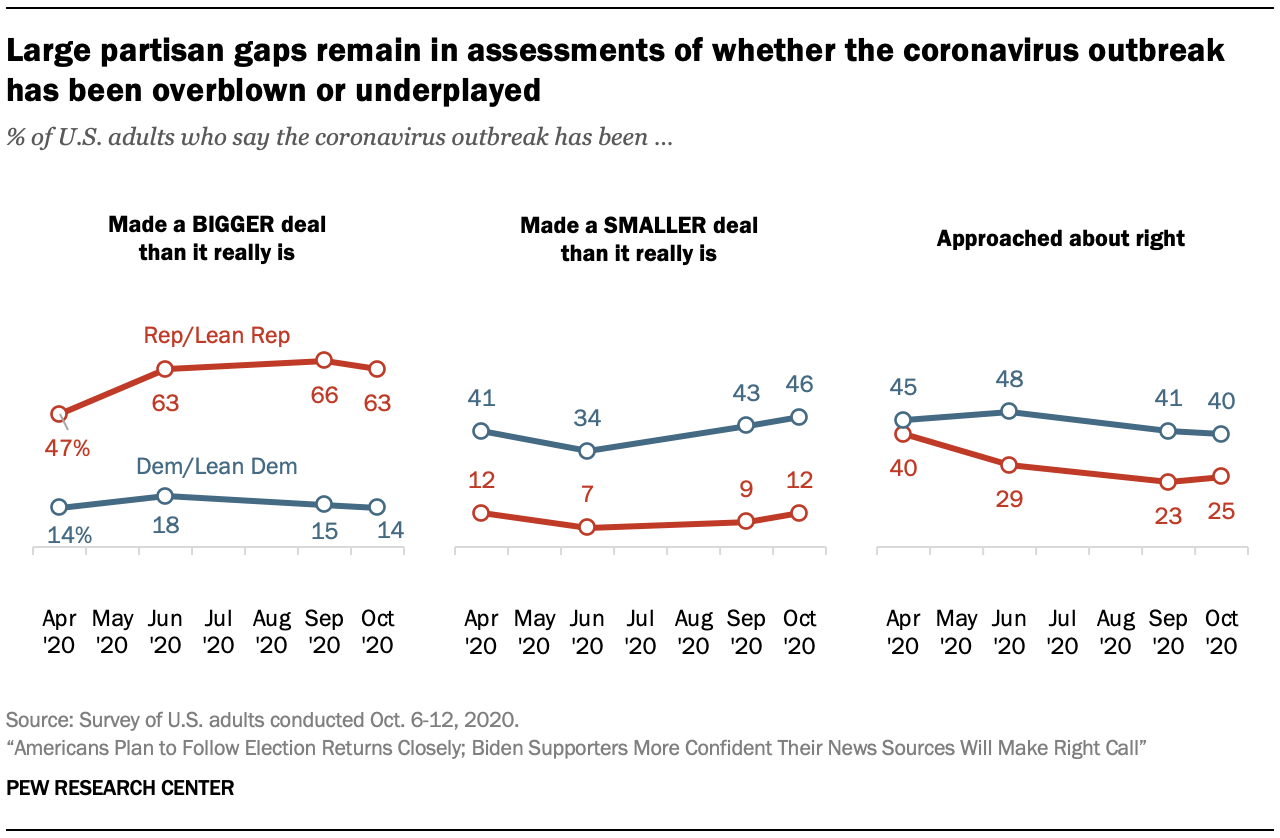 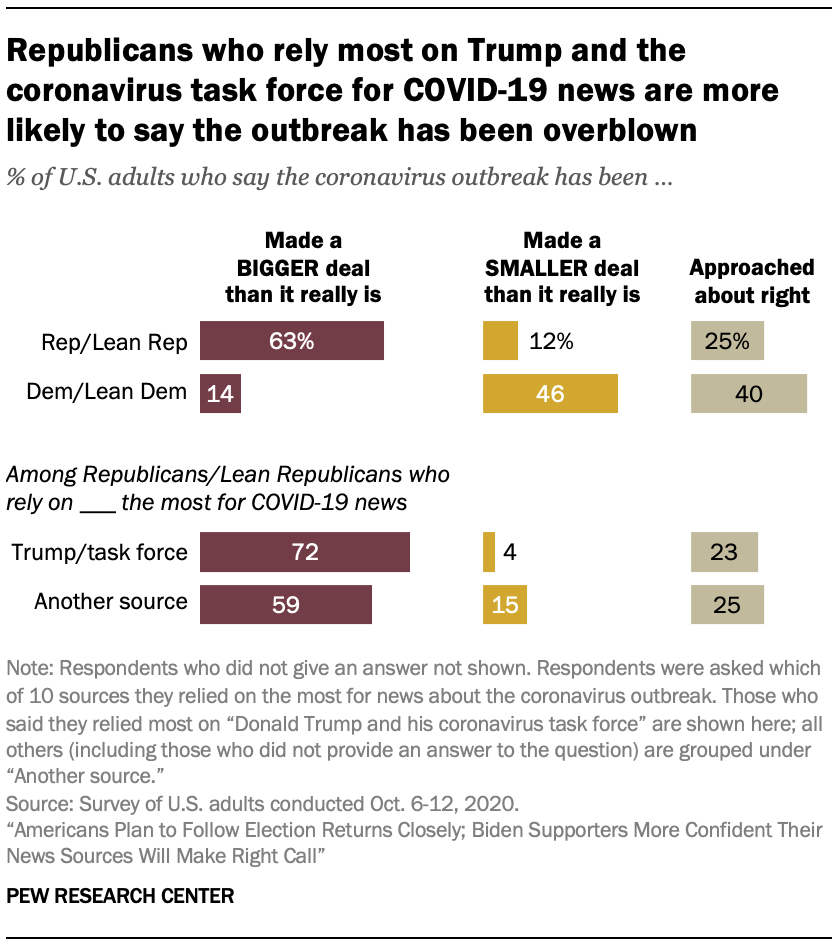 Similar to findings from early September, differences within party also exist based on where partisans get their news. Republicans whose only major sources for political and election news are Fox News and talk radio were much more likely than other Republicans to say that the pandemic has been overblown – 77% say this, while 3% of this group say it has been made a smaller deal than it really is. But for Republicans whose major sources included a mix of Fox or talk radio along with other outlets, 47% say the outbreak has been made a bigger deal than it really is, with 21% saying it has been underplayed.

These patterns do not necessarily prove that partisans are taking their cues directly from their news sources. Other factors beyond media diet may impact people’s assessments of how the U.S. has reacted to the outbreak. And the relationship can go in either direction: People can either pick their media sources to fit their existing political views, or have their views shaped by those sources (or both at the same time). Still, the data shows a clear connection between news diet and views on the pandemic.

Large differences on how well U.S. controlled the outbreak based on party and news diet 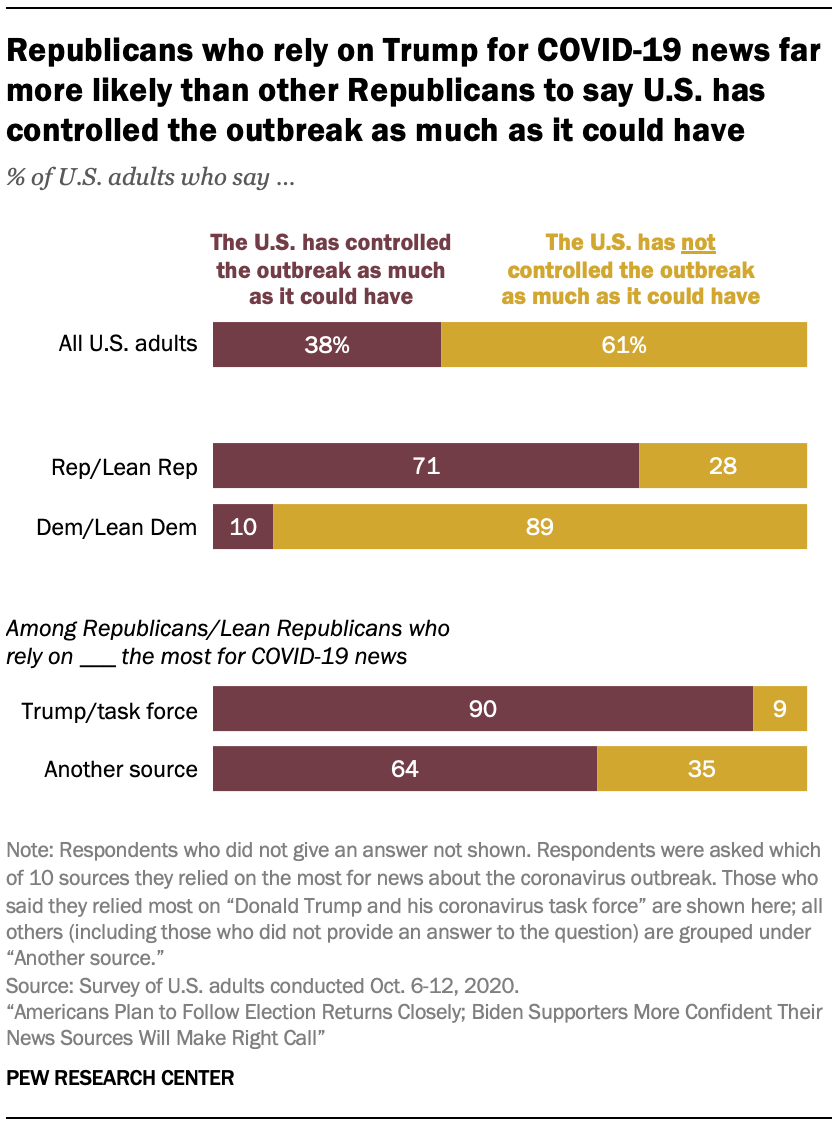 When asked how well the U.S. has controlled the coronavirus outbreak, 61% of all Americans now say the country has not controlled it as much as it could have while 38% say it has – numbers that are basically unmoved since September.

The large partisan difference on this question also remains. The October survey reveals that about seven-in-ten Republicans (71%) say the country has controlled the coronavirus as much as it could, and 28% say it has not. On the Democratic side, just 10% say the outbreak has been controlled as much as possible, compared with about nine times that many who say it has not been (89%).

Among Republicans, there are differences between those who turn to the White House for information and those who don’t. Nine-in-ten who rely most on Trump and the task force for coronavirus news say the country has controlled the outbreak as much as it could, compared with about two-thirds (64%) of Republicans who don’t rely on Trump and the task force. 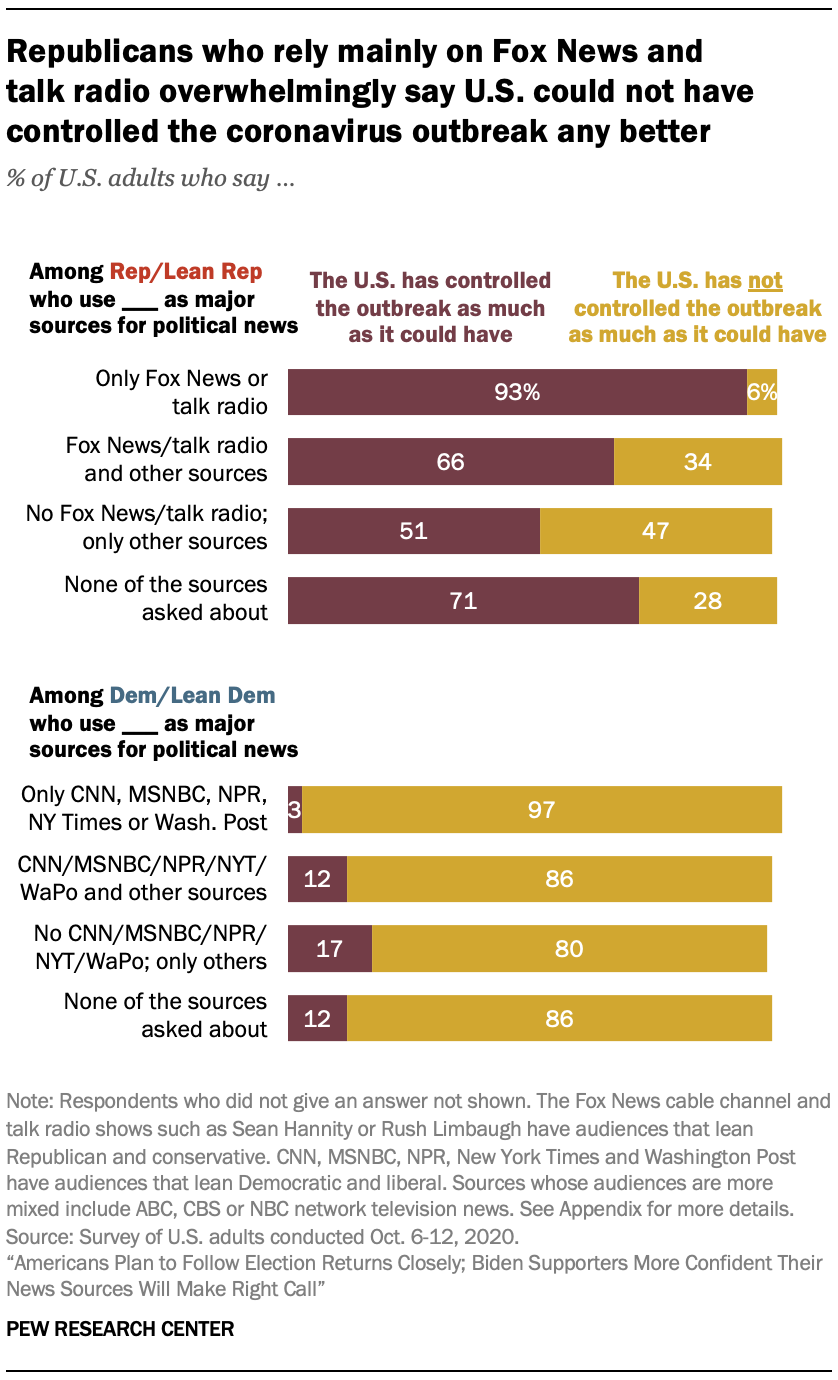 Within the Republican Party, as in September, there are also significantly different responses based on media diet. Republicans whose major sources for political and election news only include Fox News and/or talk radio are much more likely to say the pandemic has been controlled as much as possible (93%) than those with a mix of sources (66%) and those who name some major sources, but not Fox News or talk radio (51%). The differences among Democrats who choose different media diets are much smaller.

These partisan differences over how the U.S. has controlled the outbreak, as well as the differences based on information sources within parties, have remained relatively steady from September to October.

Most know that about 200,000 have died from COVID-19 in the U.S.; those closely following coronavirus news far more likely to know this 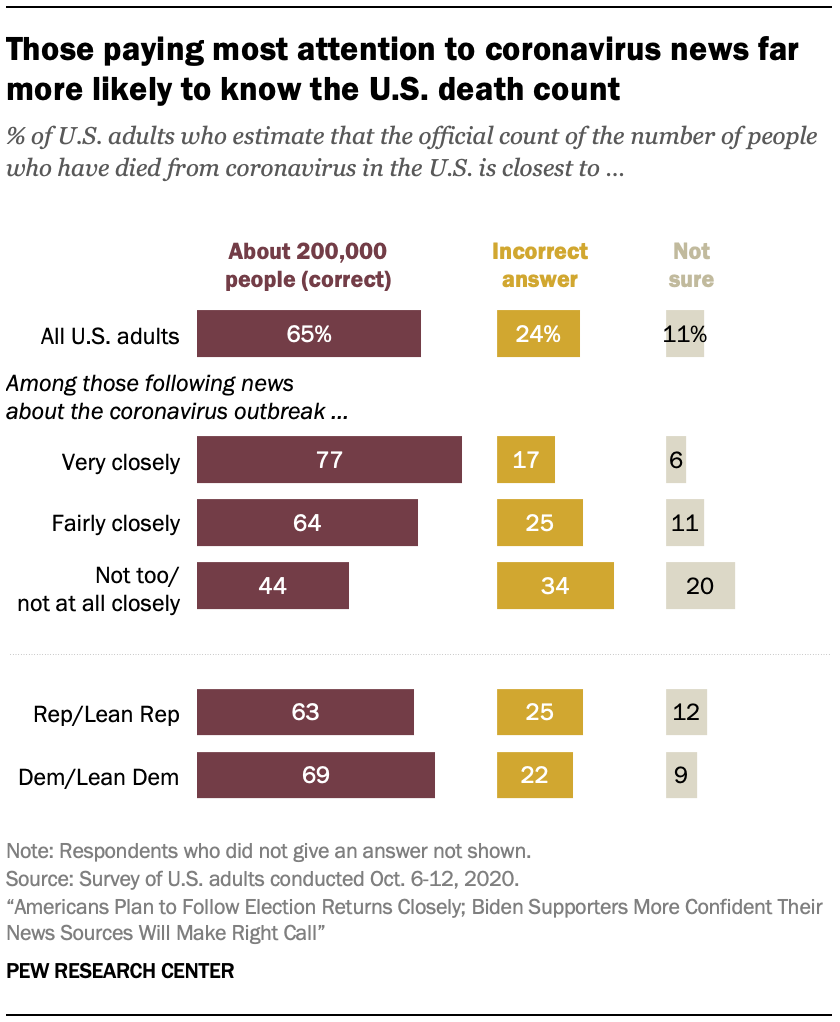 Next: Appendix Next Page → ← Prev Page