Pew Research Center’s American News Pathways project conducted this study to understand how Americans are engaging with and perceiving news coverage of the 2020 presidential election and the COVID-19 pandemic.

For this analysis, we surveyed 10,059 U.S. adults between Oct. 6-12, 2020. Everyone who completed the survey is a member of Pew Research Center’s American Trends Panel (ATP), an online survey panel that is recruited through national, random sampling of residential addresses. This way nearly all U.S. adults have a chance of selection. The survey is weighted to be representative of the U.S. adult population by gender, race, ethnicity, partisan affiliation, education and other categories. Read more about the ATP’s methodology. 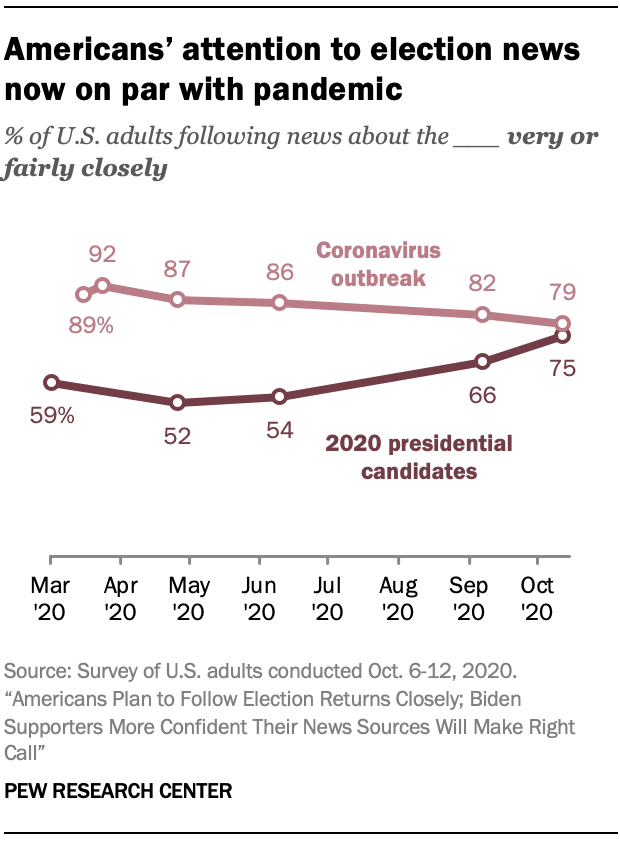 With the country just a couple of weeks away from Election Day 2020, attention to news about the presidential candidates has increased. For the first time since the coronavirus outbreak began in earnest in the United States, Americans are following the election as closely as the pandemic.

And, amid questions over how mail-in ballot counting could impact the timing of results, Americans plan to tune in closely to election night returns, according to a new survey of 10,059 U.S. adults conducted Oct. 6-12, 2020. This survey is part of the ongoing American News Pathways project at Pew Research Center.

At the same time, during a month when it was made public that President Donald Trump and several others in the White House were infected with the coronavirus – connecting it even more closely to the election – Republicans’ sense that it has been overplayed and controlled as much as possible remains largely unchanged. This is also true among Republicans who rely on Trump and his coronavirus task force for news about the outbreak.

Overall, three-quarters of U.S. adults say they are paying “very” or “fairly” close attention to news about the 2020 presidential candidates. That is up from 66% just a month ago and includes 39% who are paying very close attention. It also brings the share of Americans who are closely following the election roughly in line with the share closely tracking coronavirus news (79%), attention that has remained high since the outbreak hit the U.S. in early March. 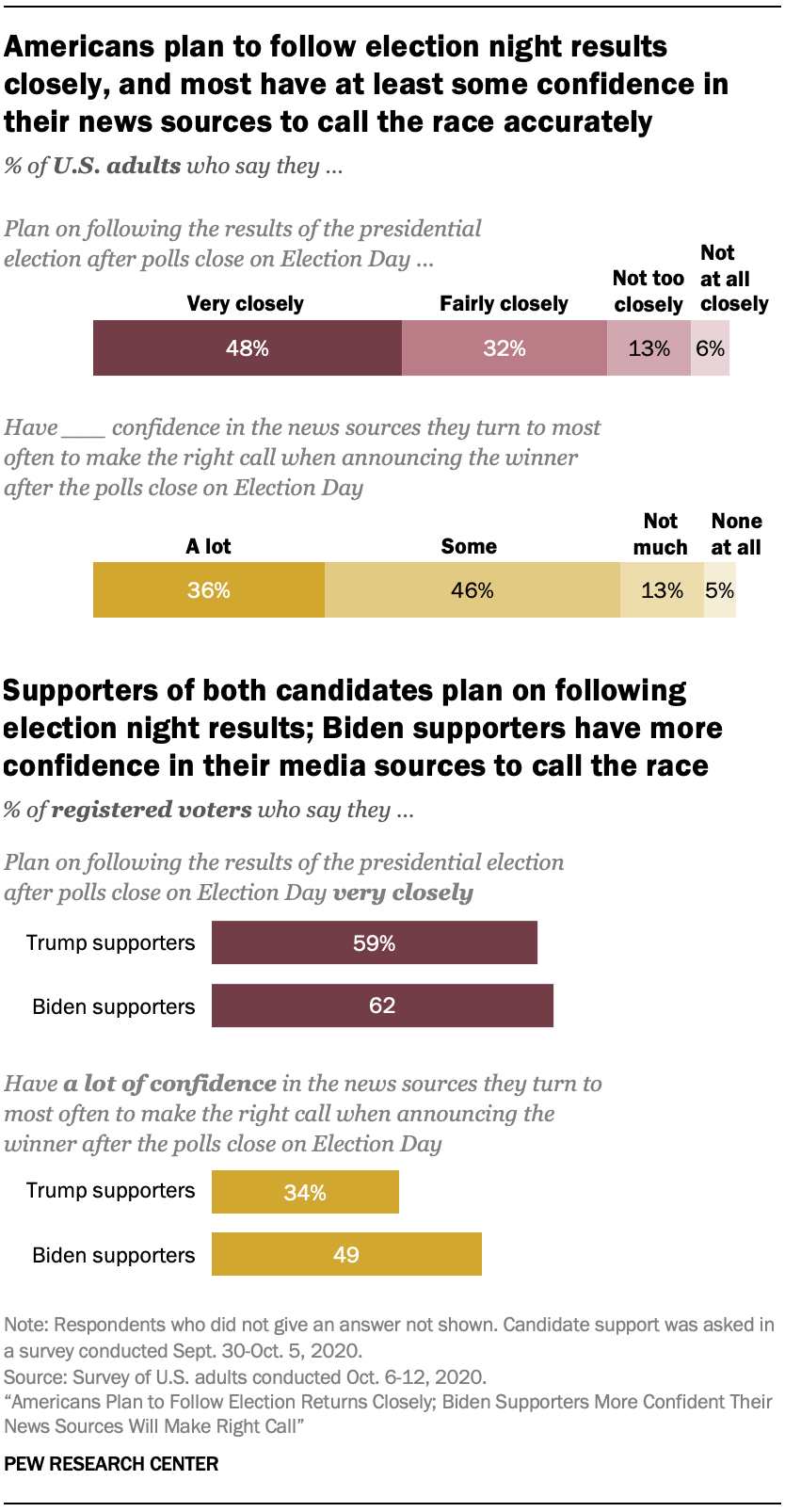 Americans plan to pay even closer attention as results come in on election night. Roughly half of U.S. adults (48%) say they plan to follow results after polls close on Nov. 3 very closely, and another 32% plan to do so fairly closely. Just 6% plan to follow the results not at all closely.

What’s more, in what will likely be a more complicated ballot counting scenario than normal due to the large number of mail-in ballots amid the pandemic, about eight-in-ten Americans express at least some confidence that the news outlets they turn to most will make the right calls in announcing the winner after polls close, including 36% who have “a lot” of confidence and 46% who have “some” confidence. 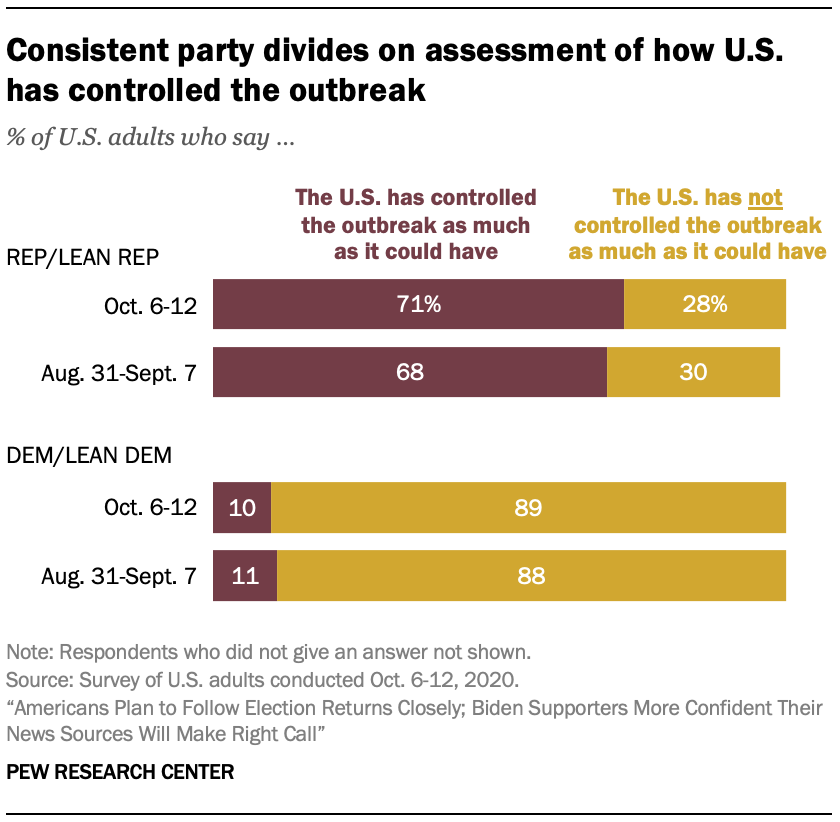 Among Republicans, the views of those who mainly rely on Trump and his coronavirus task force for coronavirus news also went unchanged. Roughly three-quarters of this group (72%) say the coronavirus outbreak has been exaggerated, nearly the same portion as said so in September (75%).

Other key findings in this report include:

Next: 1. Americans plan to follow election returns closely and most are confident their news sources will make the right call Next Page → ← Prev Page