1. Americans plan to follow election returns closely and most are confident their news sources will make the right call

Americans plan to pay close attention to Election Day 2020 results as they roll in. Roughly half of U.S. adults (48%) say they will follow Election Day results very closely, with another 32% who will do so fairly closely. A mere 6% plan to follow not at all closely. 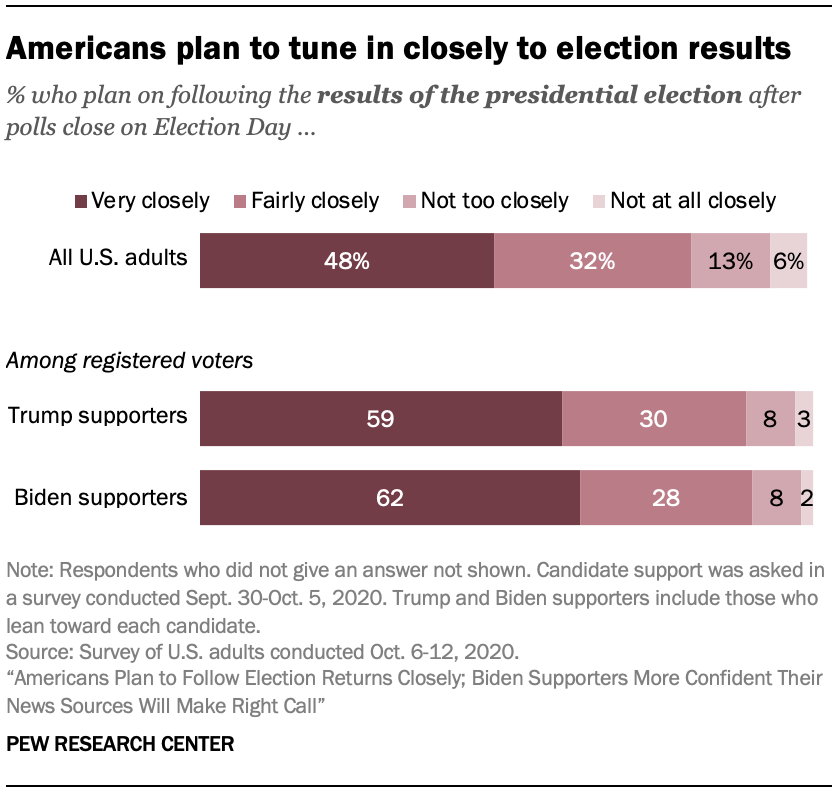 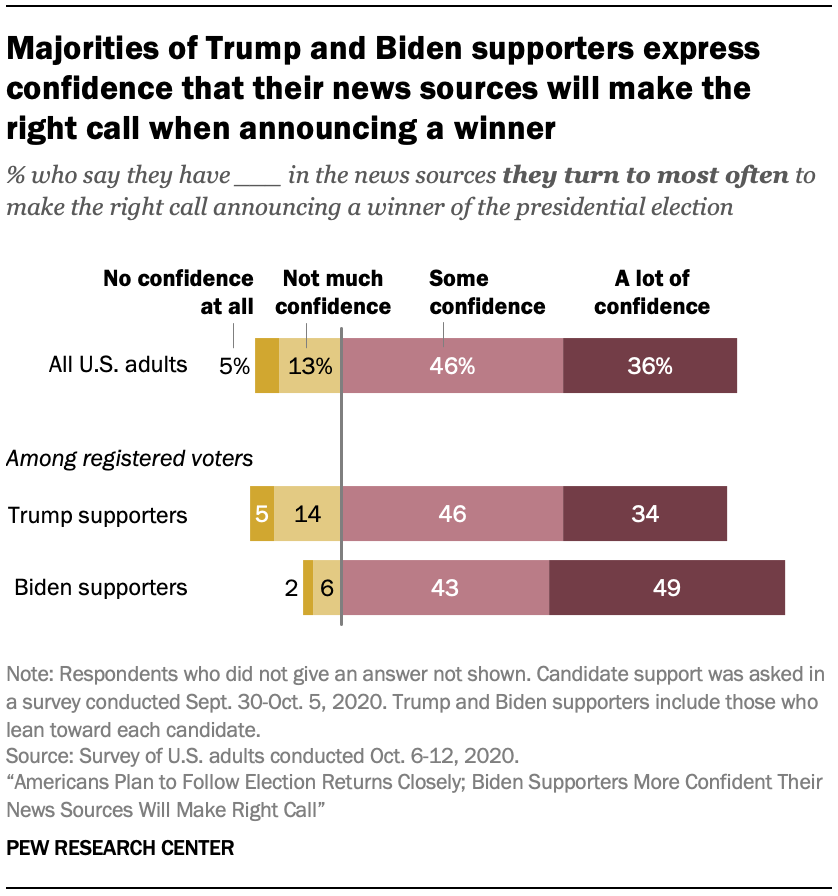 At the same time, though, many Americans do not have a great understanding of how news outlets make those calls. When asked which best describes how news organizations decide to announce who has won the presidential election in a state, 44% of adults correctly answered that the organizations do so when they feel confident based on vote returns and other information. A quarter (26%) incorrectly think it is when state officials are ready to formally certify the results after counting ballots (a process that often does not occur until December), and 30% say they are not sure.

There are no significant differences between Trump and Biden supporters giving the correct answer to this question. 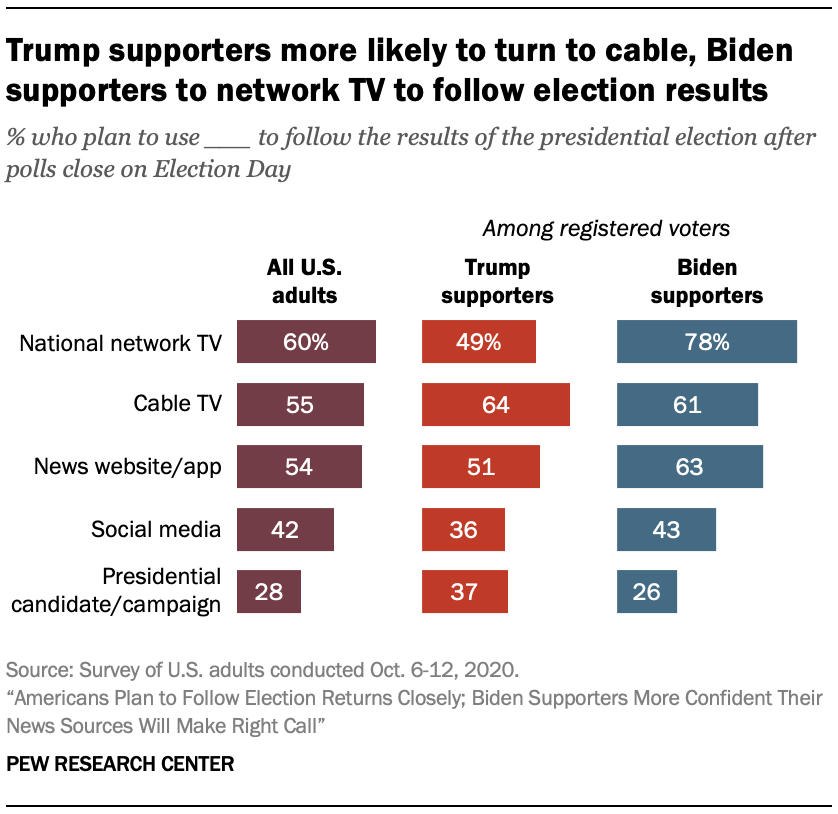 When it comes to where Americans plan to follow election night returns, a wide mix of pathways emerge – with many Americans planning to use multiple methods over the course of the night.

Overall, the largest segment of U.S. adults (60%) say they plan to follow the election results on national network TV (such as ABC, CBS, NBC or PBS). Close behind are cable TV (55%) and news websites and apps (54%). Another 42% plan to use social media, while 28% say they will turn to a presidential candidate or campaign for the results.

While in many ways the norms of politics and campaigns seem to have shifted since the 2016 presidential election, with deep partisan divisions today over many aspects of conducting elections, certain views about the news media’s role have held steady – and with similar areas of partisan agreement and disagreement. 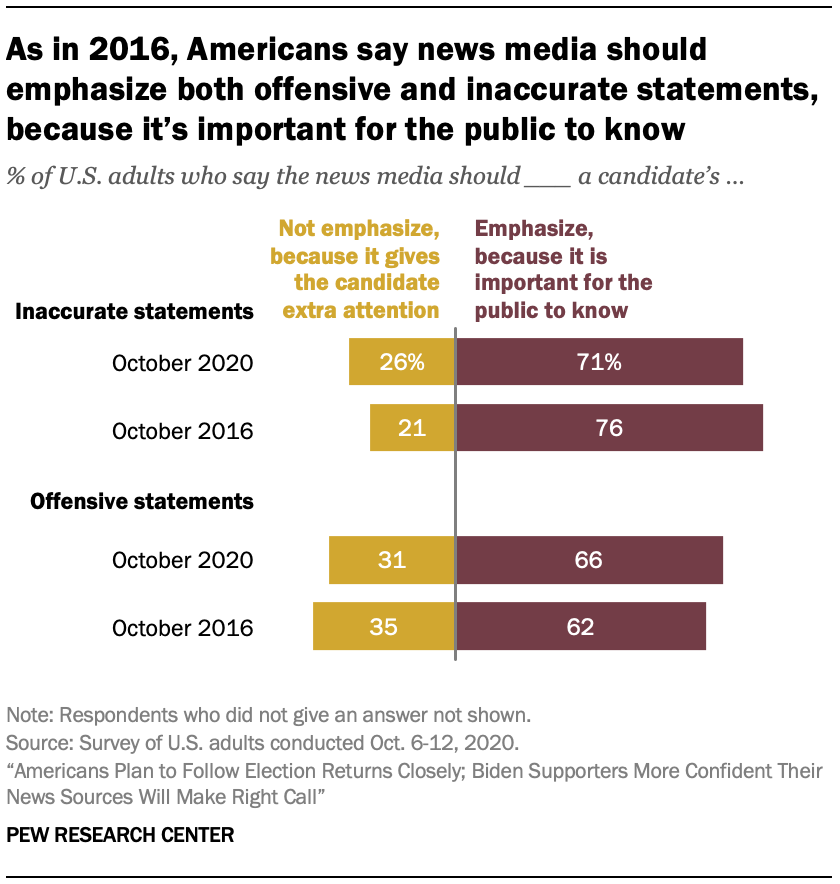 One set of questions asked about how much emphasis news organizations should place on certain types of candidate statements.

Most Americans also think the news media should call out offensive statements made by a candidate: 66% say they should emphasize such statements compared with 31% who say they should not. Again, these results are consistent with views in 2016.

When it comes to offensive statements, however, there is more disagreement between Biden and Trump supporters. While about three-quarters of registered voters who support Biden (76%) say the news media should call out such statements, fewer Trump supporters (55%) feel this way. 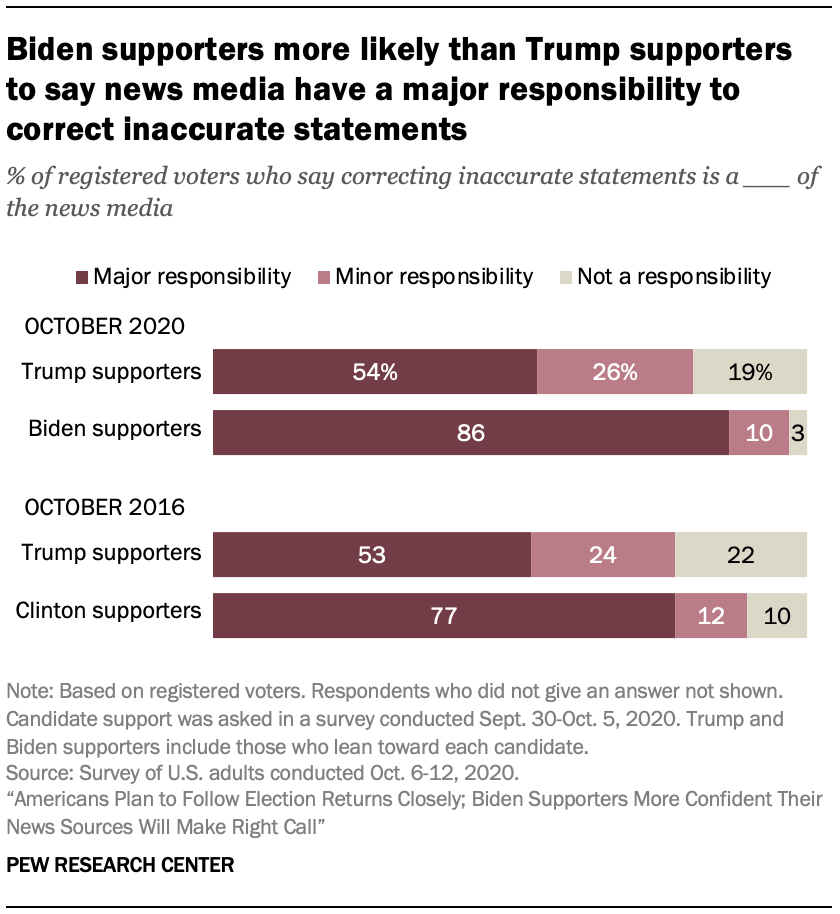 These figures are strikingly consistent with 2016. Heading into that election, 62% of U.S. adults said correcting inaccurate statements was a major responsibility of the news media, with a similarly large difference between Clinton and Trump supporters.

Next: 2. Interest in election news increases, with most Americans feeling worn out by the volume of coverage Next Page → ← Prev Page