About two-thirds of Republicans say the U.S. has controlled the outbreak as much as it could have; 88% of Democrats disagree

Pew Research Center’s American News Pathways project conducted this study to understand how Americans are engaging with and perceiving news coverage of the COVID-19 pandemic.

For this analysis, we surveyed 9,220 U.S. adults between Aug. 31-Sept. 7, 2020. Everyone who completed the survey is a member of Pew Research Center’s American Trends Panel (ATP), an online survey panel that is recruited through national, random sampling of residential addresses. This way nearly all U.S. adults have a chance of selection. The survey is weighted to be representative of the U.S. adult population by gender, race, ethnicity, partisan affiliation, education and other categories. Read more about the ATP’s methodology. 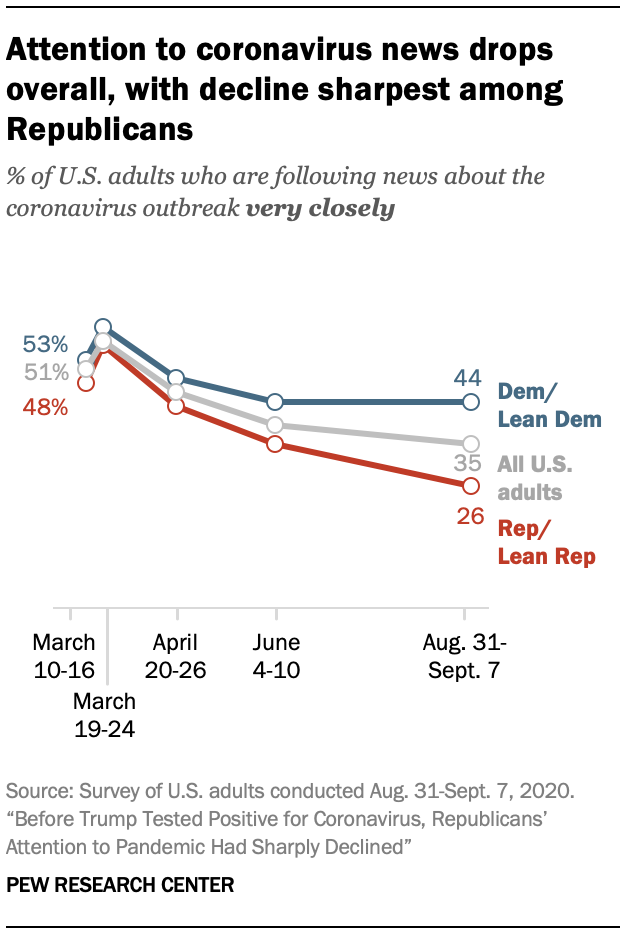 Six months into a pandemic that has claimed more than 200,000 lives in the United States and profoundly impacted daily life – and before President Donald Trump tested positive for the coronavirus – about six-in-ten Americans say the country has not controlled the coronavirus outbreak as much as it could have. At the same time, about four-in-ten also believe that the outbreak has been made into a bigger deal than it really is.

On these two issues, there is deep disagreement between Democrats and Republicans. And within the GOP, opinions vary considerably based on where people get their political and election news, according to a survey of 9,220 U.S. adults conducted Aug. 31-Sept. 7, 2020 (prior to the first presidential debate and Trump’s subsequent positive test for the virus) as part of Pew Research Center’s American News Pathways project.

For example, Republicans and those who lean toward the GOP are much more likely than Democrats and Democratic leaners to say the U.S. coronavirus outbreak has been controlled as much it could have and that it has been overblown. And among Republicans, those who cited Fox News and/or talk radio as their only major sources among eight sources asked about are far more likely than others to take these positions.

Meanwhile, Americans’ attention to coronavirus news has declined, from a high of 57% following that news very closely in late March to 35% who say the same in September. And the degree of attention that Americans are paying to news about the coronavirus also reveals partisan differences, with substantially fewer Republicans now following that coverage closely than Democrats. 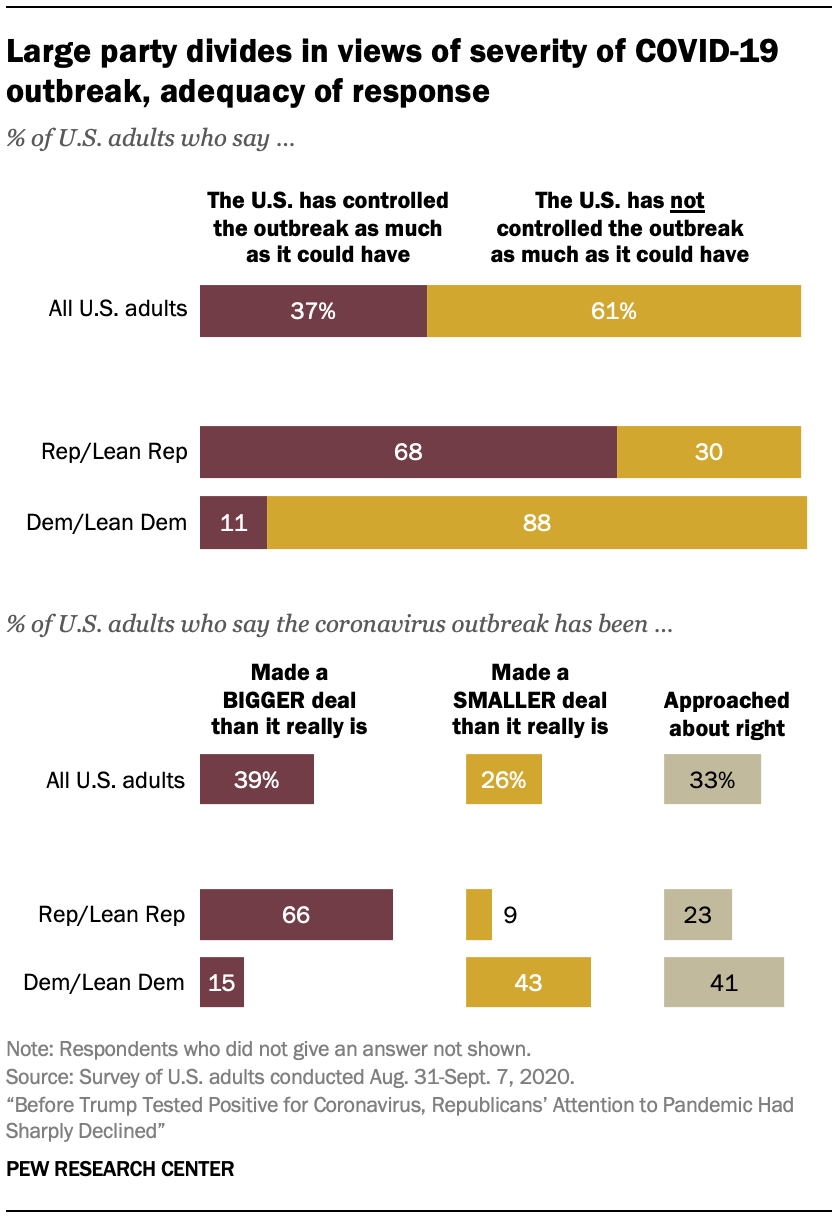 While those partisan differences were small in previous months, that gap has since grown significantly. As of early September, 44% of Democrats are following news of the outbreak very closely, compared with 26% of Republicans.

Major partisan gaps on key perceptions of the pandemic; among Republicans, large differences by media diet

Overall, 61% of adults say the U.S. has not controlled the COVID-19 outbreak as much as it could have, compared with 37% who say it has. Inside those numbers is a stark partisan divide: About two-thirds of Republicans and independents who lean Republican (68%) say the U.S. has done about as much as it could in controlling the outbreak. That view is held by only about one-in-ten Democrats, including independents who lean Democratic (11%).

But even as most Americans say the outbreak has not been controlled to the extent it could have been, a plurality (39%) believes the pandemic has been made into a bigger deal than it really is. That compares with 26% of Americans who say it has gotten less attention than it should, and 33% who say it has received about the right amount of attention.

Those numbers have not changed much since June. But in April, when the outbreak was still in its early weeks in the U.S., a plurality (42%) said that it had been approached about right, while roughly equal shares thought it had been exaggerated (29%) or underplayed (27%).

On this question, too, there is a major difference by party affiliation, with Republicans much more likely than Democrats – 66% vs. 15% – to say the outbreak has been overblown. Conversely, 43% of Democrats say the pandemic has been made into a smaller deal than it really is, compared with only 9% of Republicans. Another 41% of Democrats say it has been approached about right, compared with 23% of Republicans. These same patterns existed when Americans were surveyed on the subject earlier this year.

Among Republicans, there also are major differences based on media diet.

The survey asked respondents whether each of eight news providers was a major source of political and election news for them. Researchers then grouped these responses based on the political composition of the outlets’ audiences. For example, Republicans were analyzed based on the degree to which they get political news from the outlets with conservative-leaning audiences (specifically, Fox News and talk radio), and Democrats were categorized based on the degree to which they get news from the outlets with liberal-leaning audiences – CNN, MSNBC, NPR, The New York Times and The Washington Post. (The eighth source, national network TV such as ABC, NBC or CBS, has an audience that does not lean strongly in either direction; see Appendix and the box below for more details about how respondents were grouped by their major news sources.)

The categories in this analysis come from research on the major sources Republicans and Democrats use for political and election news.

Respondents indicated whether they use eight prominent news sources as a major source, a minor source or not a source for political and election news. The sources are Fox News cable channel, CNN, MSNBC, national network TV (ABC, CBS or NBC asked together), NPR, The New York Times, The Washington Post, and talk radio (examples of Sean Hannity or Rush Limbaugh were given). 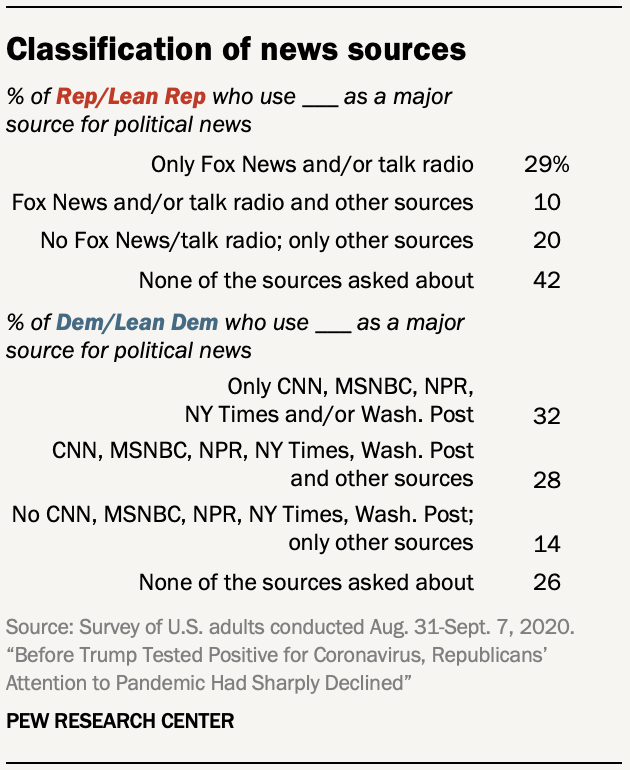 Using this method, two of the eight news sources analyzed have audiences who lean to the right politically (Fox News and talk radio); five have audiences who lean left (CNN, MSNBC, NPR, The New York Times and The Washington Post); and one group has a mixed audience (national network TV, such as ABC, CBS and NBC). (Previous research has found that Republicans and Republican-leaning independents generally use fewer news sources than Democrats and Democratic leaners.)

Democrats and Democratic-leaning independents (Dem/Lean Dem) and Republicans and Republican leaners (Rep/Lean Rep) are each divided into four groups based on which news sources they turned to as major sources for political and election news. The classifications within each party also include a group for those who do not use any of the eight sources asked about. The portion of partisans in each group is shown in the table. See Appendix for more details. 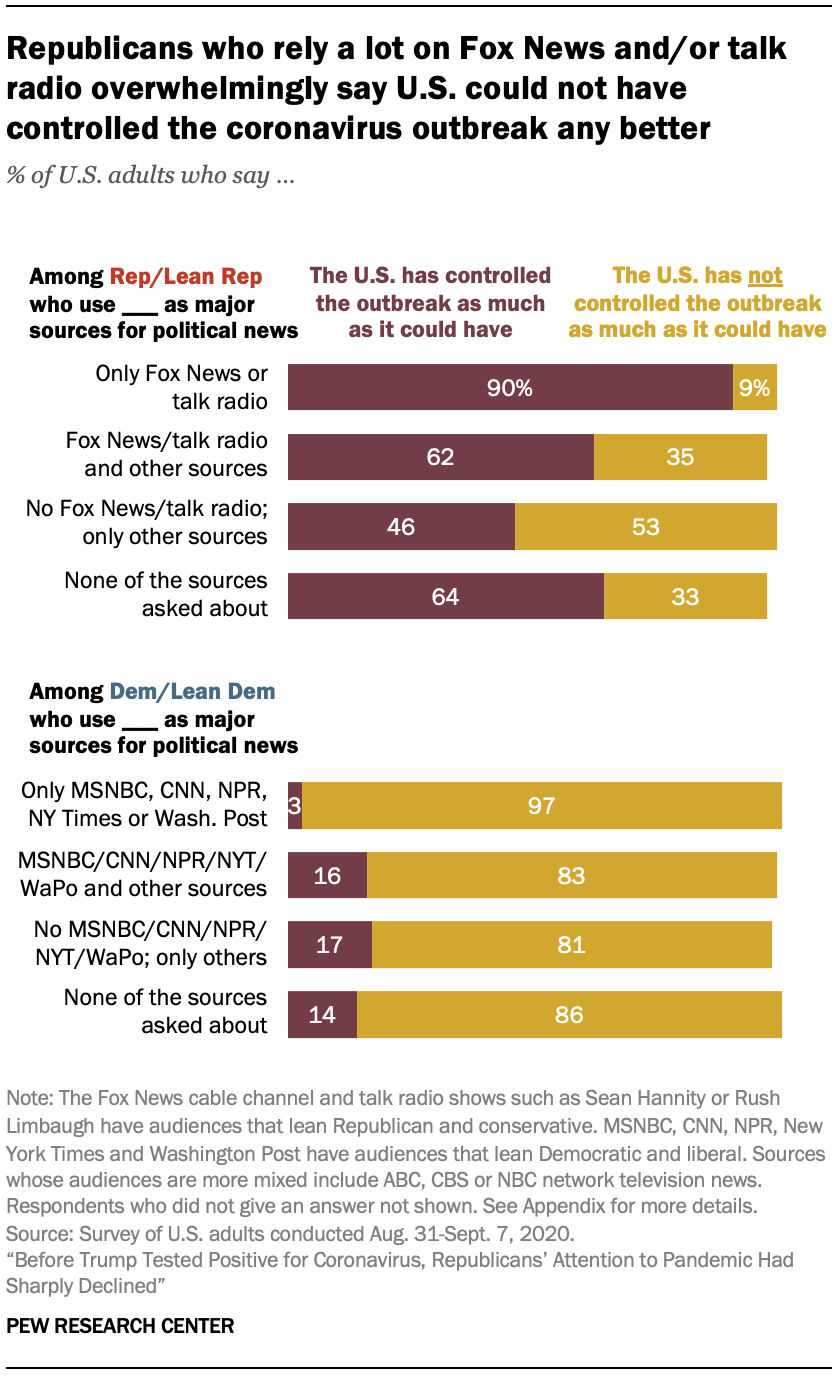 Fully 90% of those Republicans who only indicated Fox News and/or talk radio – two platforms with conservative-leaning audiences – as major sources of political news say the country has controlled the outbreak as much as it could. But among Republicans who rely on neither Fox News nor talk radio but rely on at least one of the other major news providers mentioned in the survey, about half as many (46%) say the U.S. controlled the outbreak as well as it could. 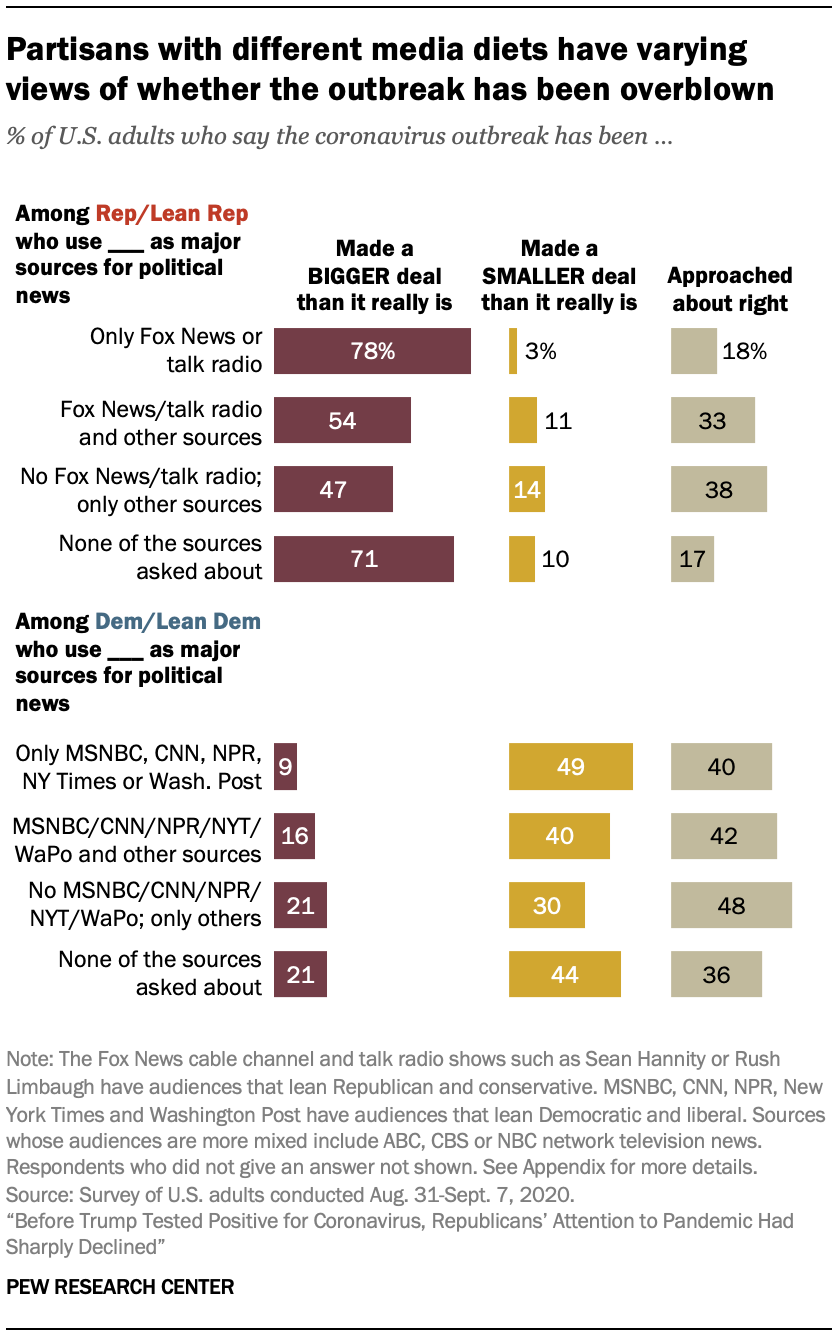 There are far smaller differences among Democrats with different media diets; large majorities in all cases say that the U.S. could have done more to control the outbreak. But unlike other groups, Democrats whose  major sources are only those with liberal-leaning audiences – MSNBC, CNN, NPR, The New York Times and The Washington Post – are almost unanimous in saying that the U.S. has not controlled the outbreak as much as it could have (97%).

There are similar patterns on the question about whether the pandemic has been overblown. As of early September, among Republicans with only Fox News and/or talk radio as major news sources, 78% say the coronavirus has been made a bigger deal than it really is. That falls to 54% among Republicans who use a mix of major sources, and 47% for those who name some major sources, but not Fox News or talk radio.

These patterns do not necessarily prove that Republicans are taking their cues directly from their news sources. Other factors beyond media diet may impact people’s assessments of how the U.S. has reacted to the outbreak. And the relationship can go in either direction: People can either pick their media sources to fit their existing political views, or have their views shaped by those sources (or both at the same time). Still, the data shows a clear connection between news diet within the GOP and views on the pandemic. 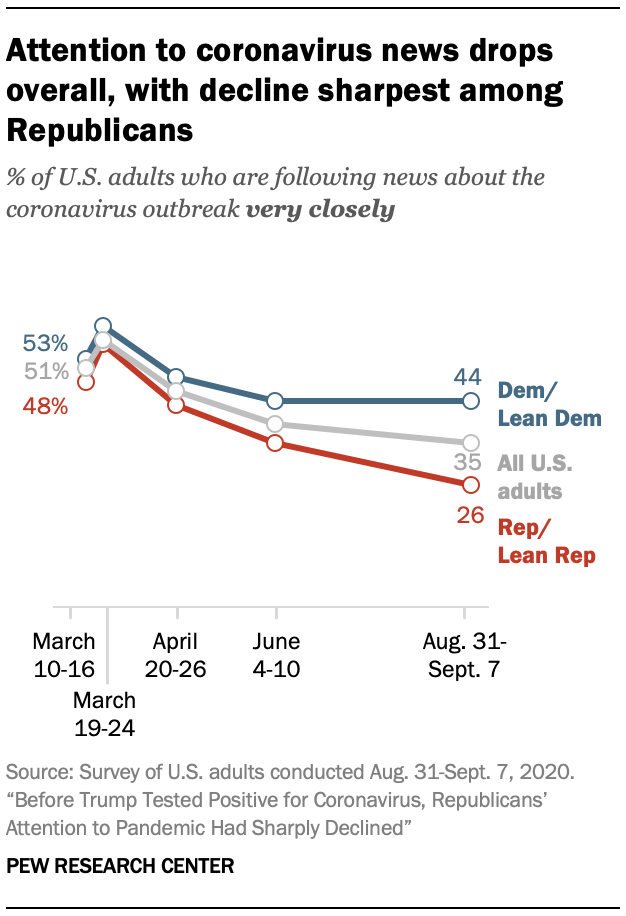 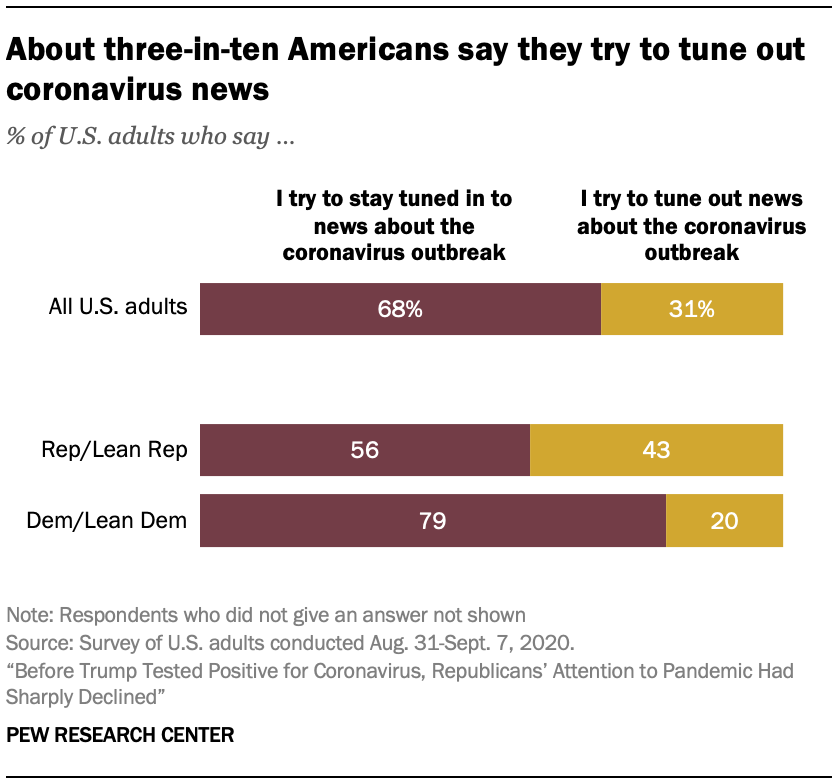 When it comes to COVID-19 coverage, some Americans seem to be trying to avoid the news: About three-in-ten (31%) say they try to tune out news about the coronavirus outbreak, with Republicans (43%) about twice as likely as Democrats (20%) to do this. But on the whole, most Americans (68%) say they are trying to stay tuned into news about the pandemic. 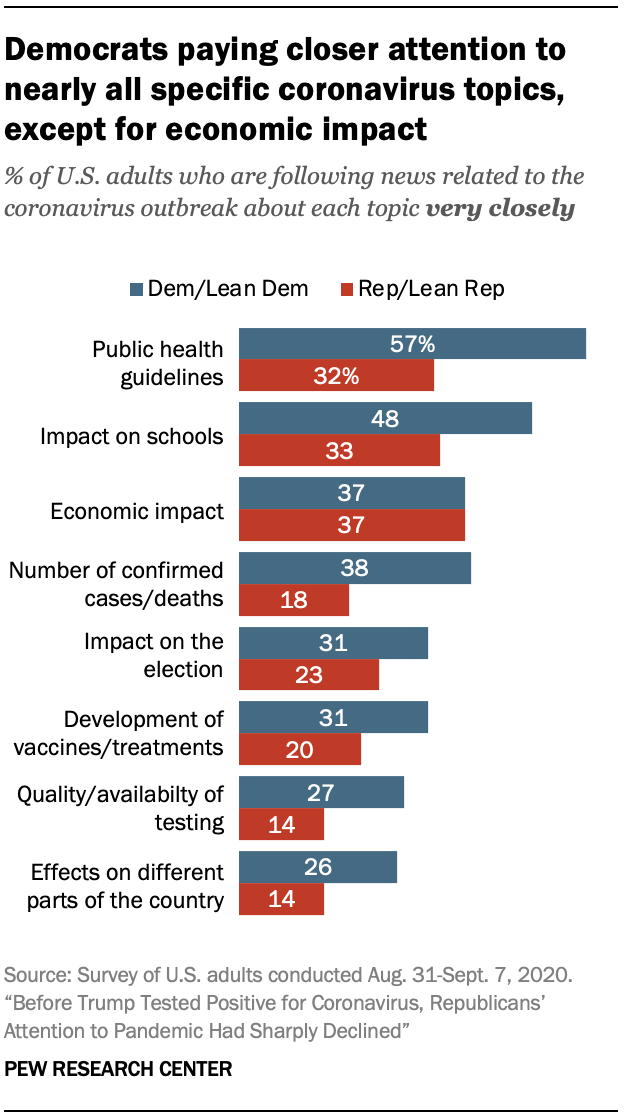 Partisan gaps in attention are also evident when Americans are asked about several specific topics related to the COVID-19 pandemic. Of the eight topics asked about in early September, Democrats are paying more attention than Republicans to seven of them – often by significant margins. The only topic on which there is no partisan gap concerns the outbreak’s economic impact.

Within both parties, those with a mixed diet of news sources are paying the most attention to COVID-19 news

Aside from partisan differences, there are also differences within each party based on media diets. 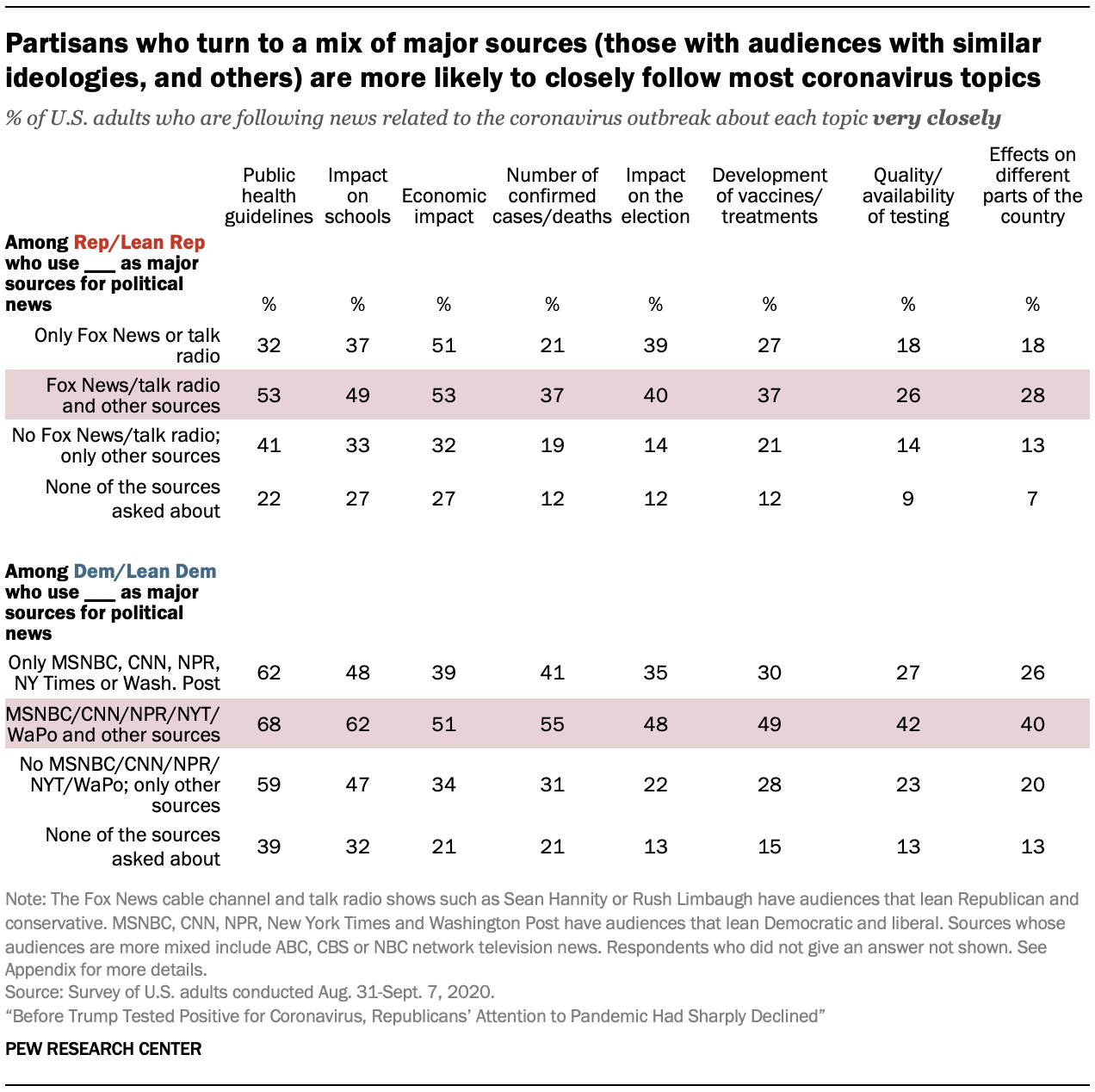 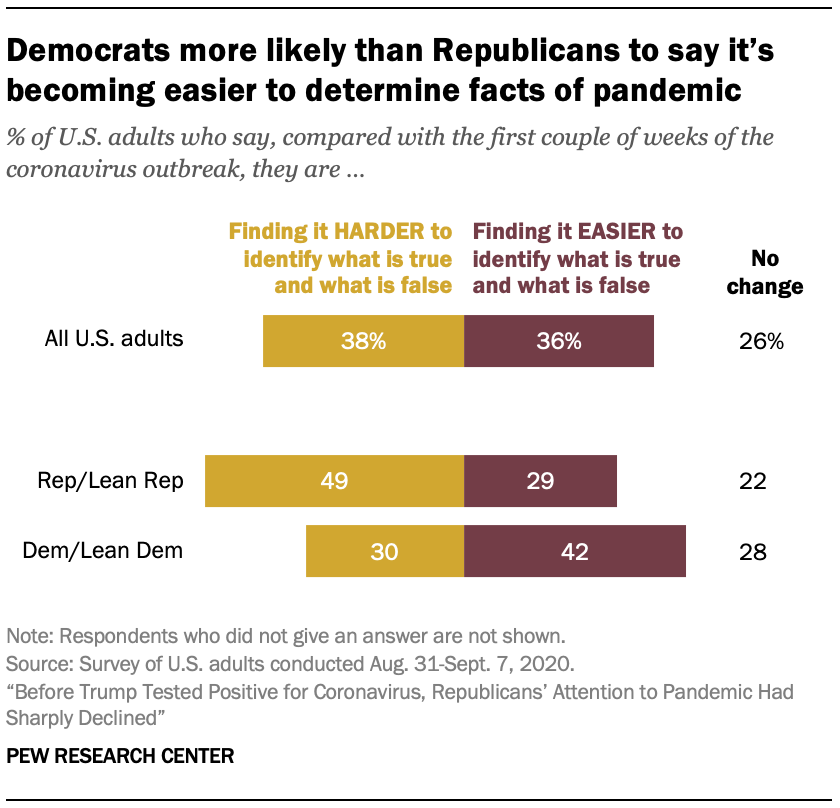 Americans overall are about evenly split over whether it has become harder or easier to distinguish truth from falsehoods about the coronavirus outbreak since the early days of the pandemic. While 38% of U.S. adults say that as of early September they are finding it harder to identify what is true and what is false, an almost identical share (36%) say they are finding it easier. The remainder (26%) say it hasn’t changed much in either direction.

Again, there are differences between the two major parties on this question.

Nearly half of Republicans (49%) say it is harder to determine what is true compared with the first weeks of the outbreak. That is substantially more than the 29% of Republicans who say it is easier and the 22% who say there has been no change.

But Democrats are more likely to say it has become easier (42%) rather than harder (30%) to discern the truth about the outbreak. Another 28% say there has been no change. 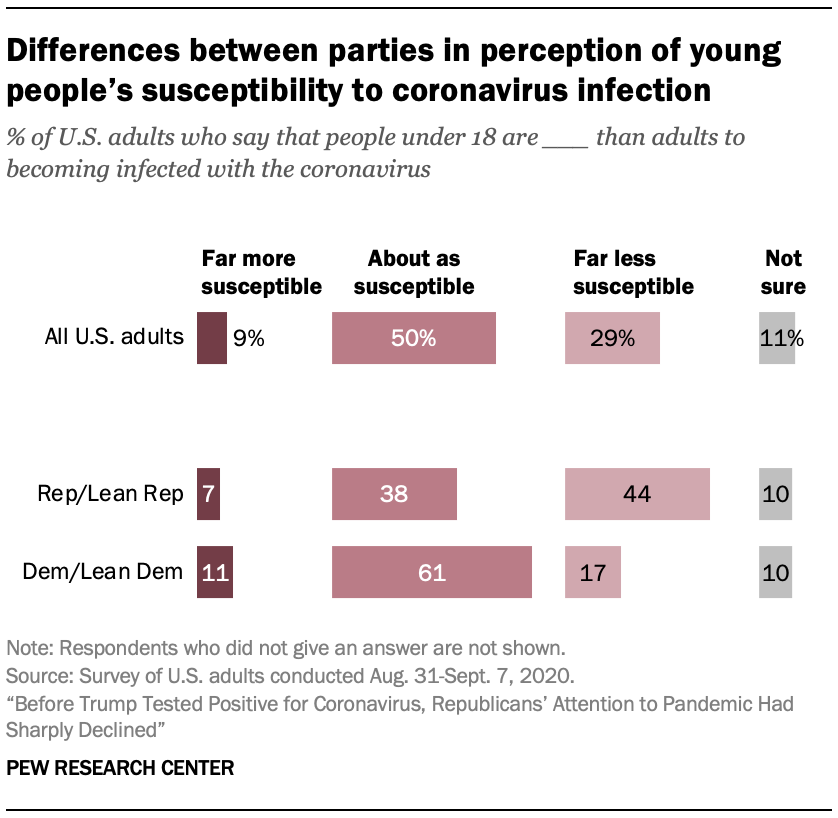 One specific area of disagreement is how susceptible young people (under the age of 18) are to becoming infected with the virus, a debate that often surfaces in discussions over whether and when to reopen schools for in-classroom learning.

There is no strong evidence that younger people are less likely than adults to be infected with the virus, though there are differences by age in likelihood of death and severity of symptoms.

Overall, half of U.S. adults say that people under 18 are about as susceptible as their elders to becoming infected with the coronavirus, while 29% say that minors are far less susceptible. Just 9% say that young people are far more susceptible, while 11% say they are not sure. 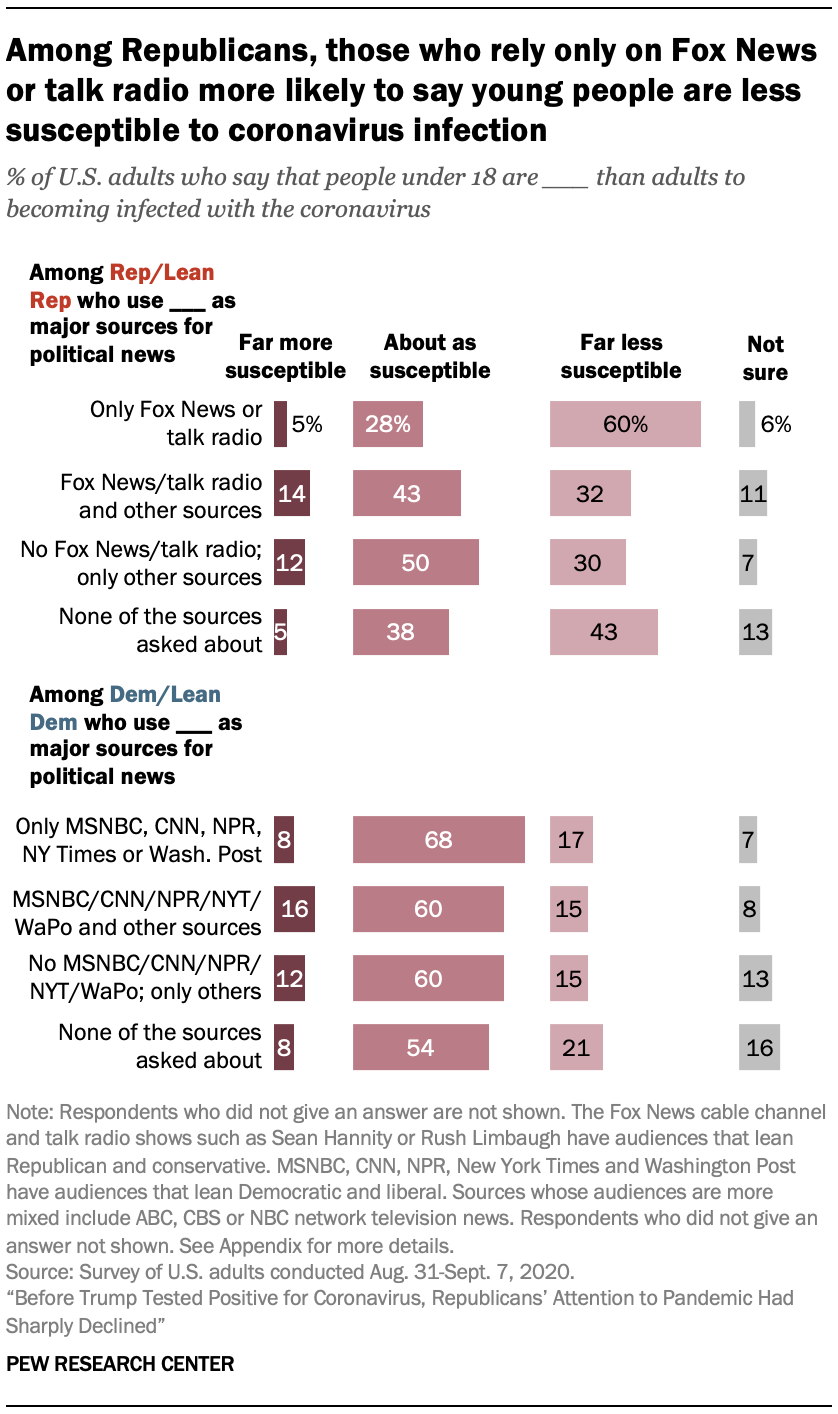