1. YouTube news consumers about as likely to use the site for opinions as for facts 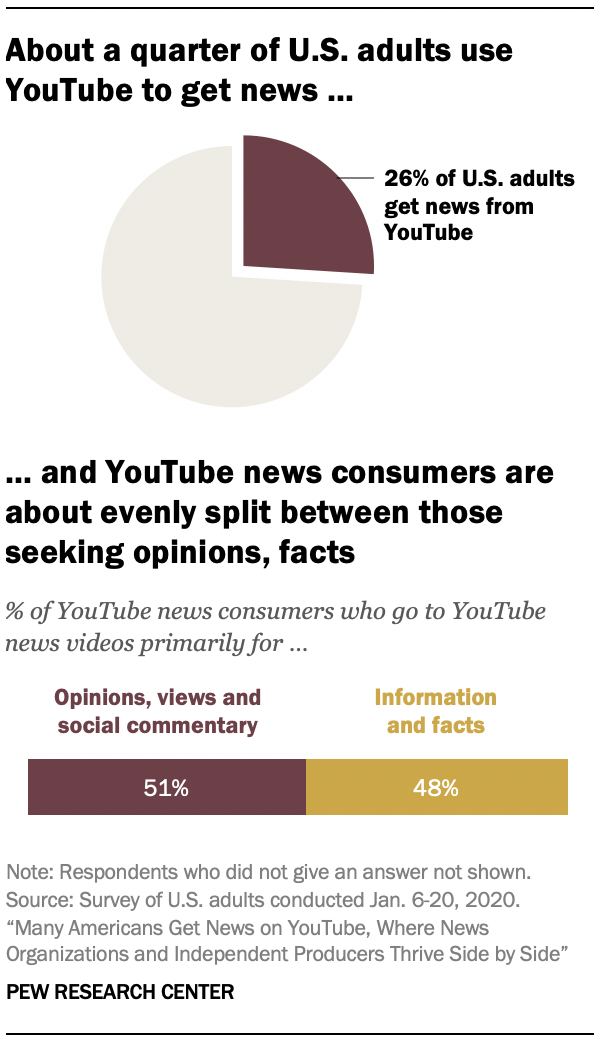 YouTube is one of the most popular online platforms in the United States. About seven-in-ten Americans (71%) say they use it, including roughly a quarter of all U.S. adults (26%) who get news there.4 The video-sharing site has become a place for journalists, commentators, news organizations, and others to publish a wide range of content, and Americans who get news on YouTube are about evenly divided between those who say they go there primarily to get opinions and social commentary (51%) and those who are seeking information and facts (48%).

YouTube news consumers – who are younger, more likely to be male and more racially diverse than U.S. adults overall – say that the news they find there is generally informative and that they expect it to be accurate. Two-thirds (66%) say the site’s news videos have helped them better understand current events, and about three-quarters (73%) expect the information they get from the site’s news videos to be largely accurate.

A previous Pew Research Center study found that far fewer social media news consumers (40%) expect news on social media to be accurate. But here, in the context of a specific brand, YouTube gets higher marks from its base of news consumers. Among U.S. adults overall, a separate survey found that while more people distrust than trust YouTube as a source for political and election news, the level of skepticism is not quite as high as for some other social media sites. 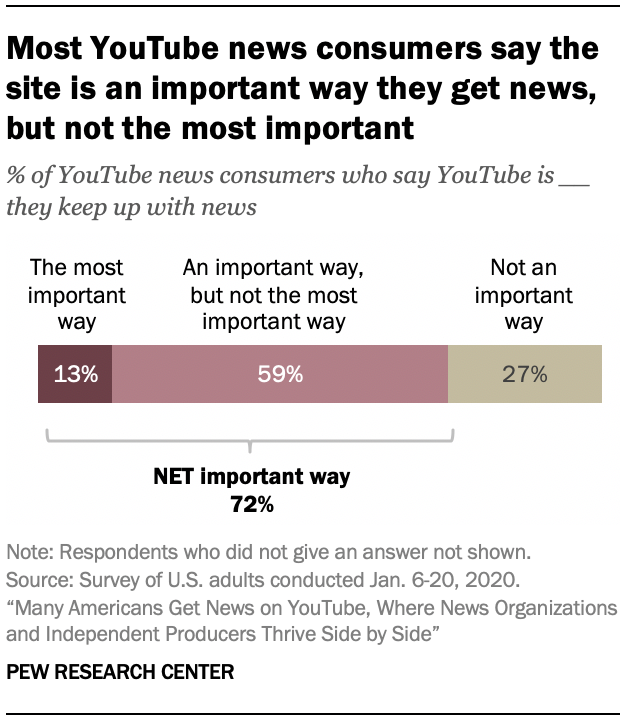 Most YouTube news consumers say the site is an important way they get news, but relatively few (13%) say that it is their most important source of news. Those who say it is the most important way they get news differ from others in several ways.  They are more likely to go directly to YouTube for news rather than clicking through links found on other platforms, and they are more likely to seek out information and facts on YouTube rather than opinion and social commentary. They also express more loyalty to particular channels, programs or YouTube personalities.

On the whole, however, YouTube news consumers are not particularly loyal to any channels or personalities, and they are equally likely to get news from YouTube channels owned by news and media outlets as they are from independent channels that are not affiliated with a news outlet.5 About a quarter of YouTube news consumers (23%) say they “often” get news on YouTube from news outlets, such as Fox News and CNN, while an identical share (23%) often get news from independent video producers, such as Philip DeFranco, Secular Talk or Right Side Broadcasting Network.

YouTube has made some recent policy changes in response to criticism about harassment and other issues, but its news consumers don’t see many major problems on the site. No more than three-in-ten say misinformation, censorship or demonetization (YouTube limiting ad revenue for video creators) are very big problems, and just 19% say the same about harassment. In previous Center research on social media and news, at least half of U.S. adults said one-sided and inaccurate news were very big problems for social media more broadly. 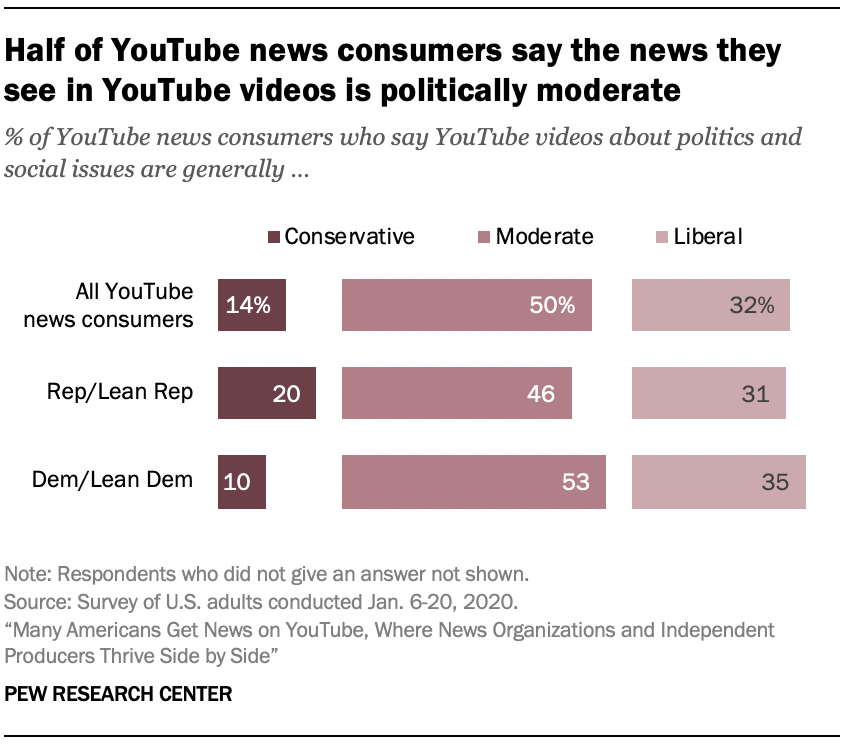 Amid a debate about whether YouTube is an engine for political “radicalization,” YouTube news consumers don’t seem to see it as particularly polarizing. Half of those who get news from YouTube see news videos about politics and social issues as generally moderate, while about a third (32%) see them as liberal-leaning and a smaller portion (14%) view them as generally conservative. When it comes to social media more broadly, social media news consumers say the news posts they see there are generally liberal, according to previous Center research.

The rest of this chapter examines findings from a January 2020 survey of Americans who get news on YouTube in more detail.

Who are the Americans who get news on YouTube? Compared with U.S. adults overall, they are more likely to be young and male, and less likely to be White.

About a third of adult YouTube news consumers are under the age of 30 (34%), compared with 21% of all adults. And about seven-in-ten (71%) are under 50, compared with slightly more than half of the total adult population (55%).

There are minimal differences between YouTube news consumers and the general adult population in education or political party identification.

How Americans get news on YouTube: Most go directly to the site, pay close attention to what they are watching 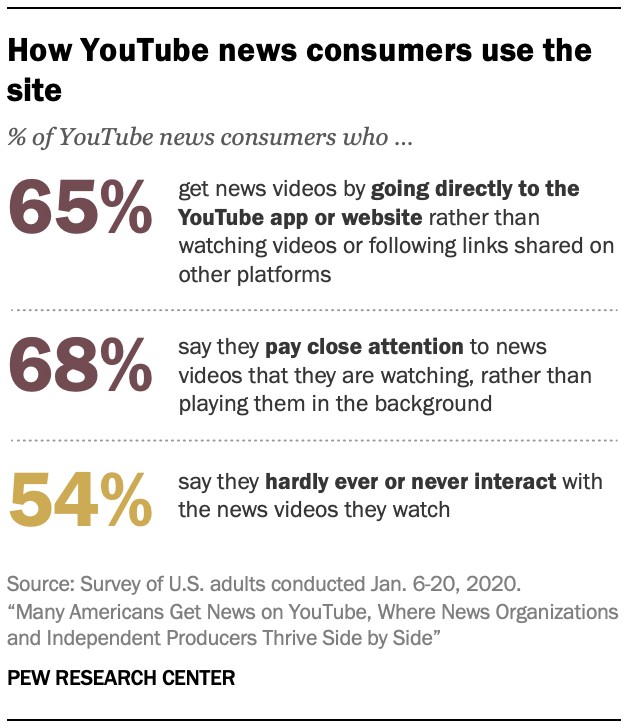 There are many different ways to get news on YouTube. News consumers can go directly to one source, ignoring the site’s other offerings. They could search for news or browse the site, possibly through YouTube’s news section. They could follow YouTube’s algorithm and watch videos that are recommended based on their previous selections, or could even get news through YouTube videos embedded in websites or social media posts without ever visiting the site or app itself. The survey shows that some behaviors are dominant but that consumers arrive at news on YouTube through a variety of paths.

A majority of YouTube news consumers (65%) say they get news videos by going directly to the site. The remainder (34%) find them indirectly, either by watching videos or following links that have been shared with them on other platforms, like Facebook or email.6

When they start watching a video – no matter how they got there – most YouTube news consumers say they pay attention to what they are watching: 68% say they generally pay close attention to news videos while they’re playing, while about three-in-ten (31%) mostly let them play in the background.

Few say they often interact with YouTube news videos by liking, commenting, subscribing or sharing: Only 14% of YouTube news consumers say they do so often, while 31% say they sometimes do this and fully 54% say they hardly ever or never do. 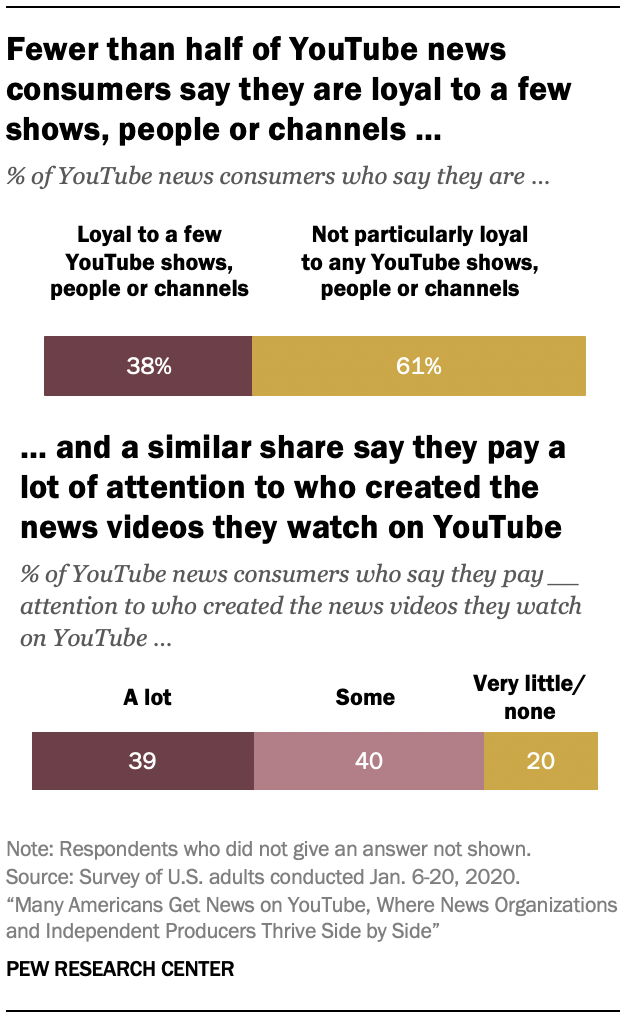 Discovering news on YouTube can be a somewhat scattershot experience. Most YouTube news consumers don’t see themselves as particularly loyal to any YouTube channels, shows or personalities, and around four-in-ten (39%) say they pay a lot of attention to who created news videos. Meanwhile, nearly eight-in-ten (78%) rely on the YouTube algorithm’s recommended news videos at least occasionally.

About four-in-ten (38%) say they consider themselves loyal to a few shows, people or channels on YouTube, while about six-in-ten (61%) do not. Previous Center research about Americans’ news habits more broadly has found that a similar share of U.S. adults (63%) say they’re not particularly loyal to the sources they get news from. 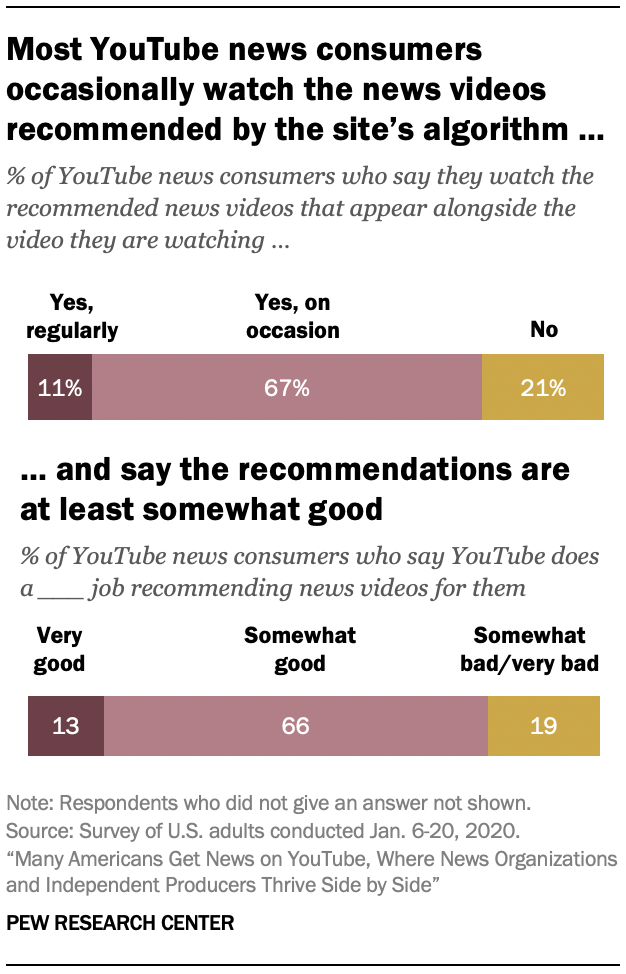 As a feature of the site, YouTube provides its users links to additional videos on topics similar to the videos they just watched – and these recommendations are widely used by news consumers. Nearly eight-in-ten YouTube news consumers (78%) report using these recommendations at least occasionally, although just about one-in-ten (11%) say they “regularly” watch the news videos recommended to them by YouTube. About one-in-five (21%) say they never do this.

When getting news on YouTube, Americans use media outlets and independent channels at similar rates 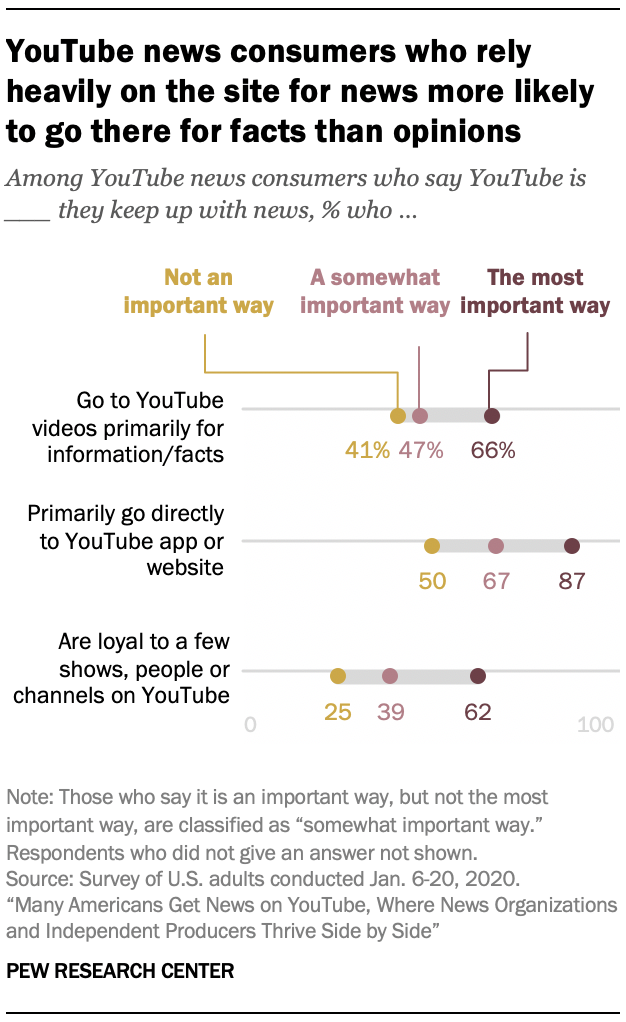 And roughly six-in-ten YouTube news consumers who say the site is their most crucial news source (62%) are loyal to a few shows, people, or channels on YouTube, compared with much smaller shares among those who ascribe less importance to YouTube in their overall news diet.

YouTube news consumers give the site positive evaluations, seeing few major problems with the news they get there 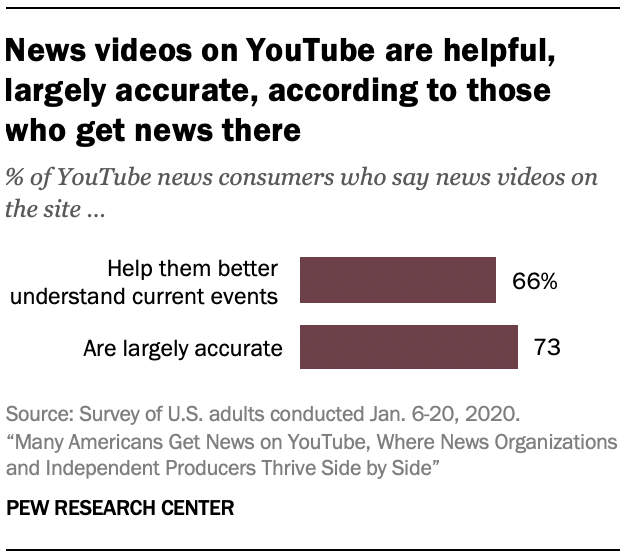 In addition, about three-quarters (73%) say that they expect the information they get from the site’s news videos to be largely accurate.

Respondents who use YouTube for news were asked to describe, in their own words, why they think the site is a unique way to get news. Grouping all the open-ended responses into two broad categories, of those YouTube news consumers who gave an answer, more point to the types of content available rather than the features of the website (58% vs. 39%; 73% of all YouTube news consumers gave an answer).

Access to sources outside the mainstream (18% of those who gave a response) and commentary and opinions (17%) are two of the main reasons why YouTube’s news content stands out, according to respondents. Meanwhile, the most commonly cited website features that make YouTube unique include the control YouTube gives them over what they watch to tailor it to their personal interests (15%) and the convenience or ease of use of the platform (13%).

Among those who gave an answer, 5% explicitly said they could not think of any reason why YouTube is a unique place to get news. 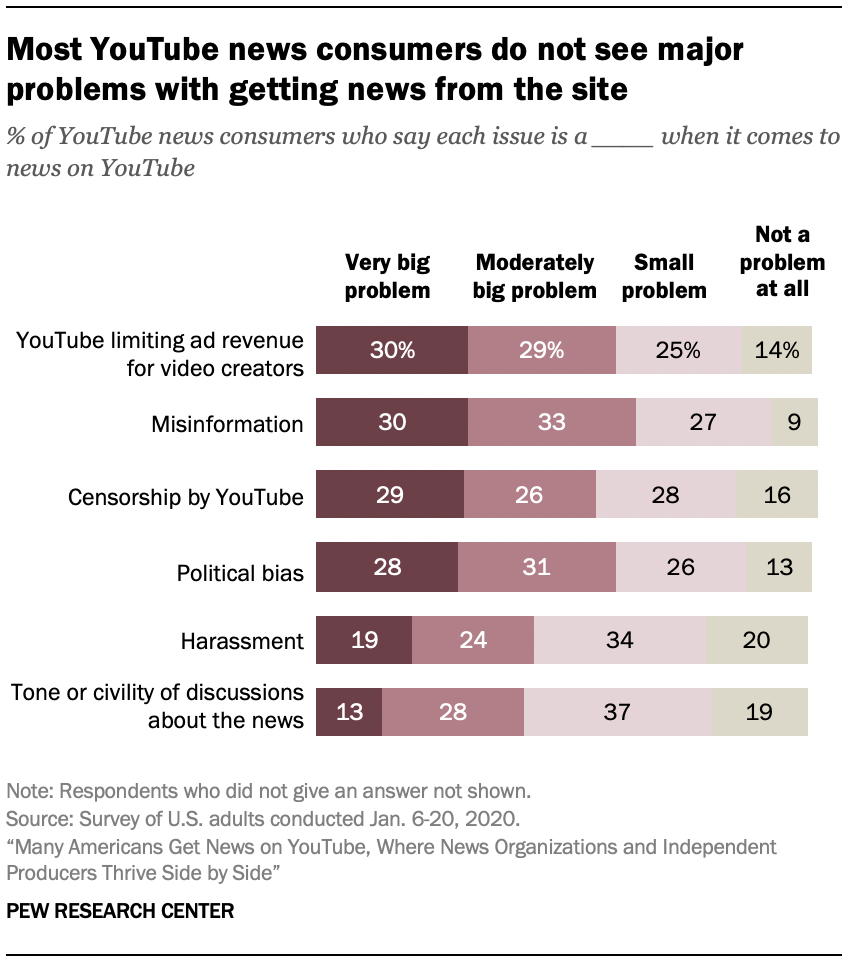 The survey also asked about six different possible issues with YouTube that have been raised by critics, ranging from misinformation and political extremism to YouTube’s control over ad revenue and content. Of the six, none were rated a “very big problem” by more than three-in-ten YouTube news consumers, although majorities say a few of these are at least “moderately big” problems.

These include demonetization – i.e., when YouTube intentionally limits advertising revenue for video creators –misinformation, censorship, and political bias. Each of these issues is rated as a very big problem by roughly three-in-ten YouTube news consumers, while similar shares say each is a moderate problem. Fewer say that either harassment (19%) or the tone of discussions about the news (13%) is a major problem on YouTube.

Those who often get news on YouTube from independent news channels are more likely than other YouTube news consumers to see two YouTube policies as major problems: demonetization (51%) and content moderation, which some view as censorship (44%). 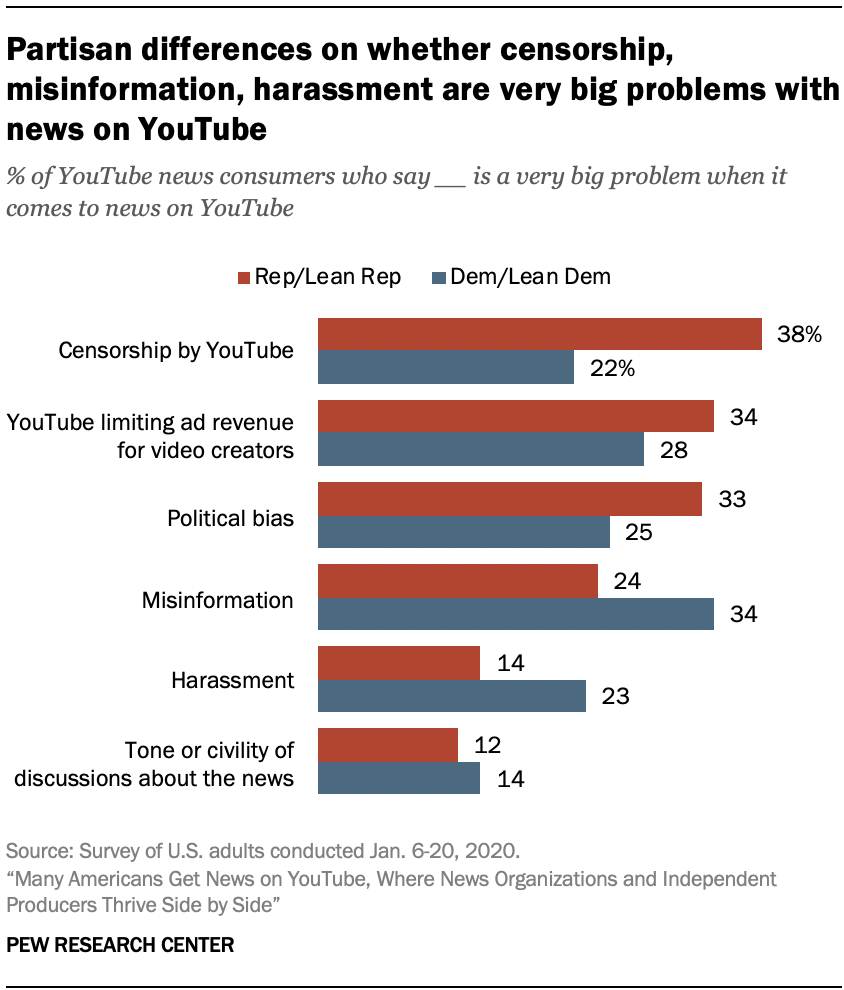 There are some partisan differences in what YouTube news consumers see as problems with news on the site.

Meanwhile, Democrats are more concerned than Republicans about two other problems: misinformation (34% of Democrats say this is a very big problem, vs. 24% of Republicans) and harassment (23% vs. 14%).

Among YouTube news consumers, relatively few in both parties see the tone or civility of discussions about the news on YouTube as a very big problem.

When getting news on YouTube, Americans often turn to media outlets and independent channels at similar rates 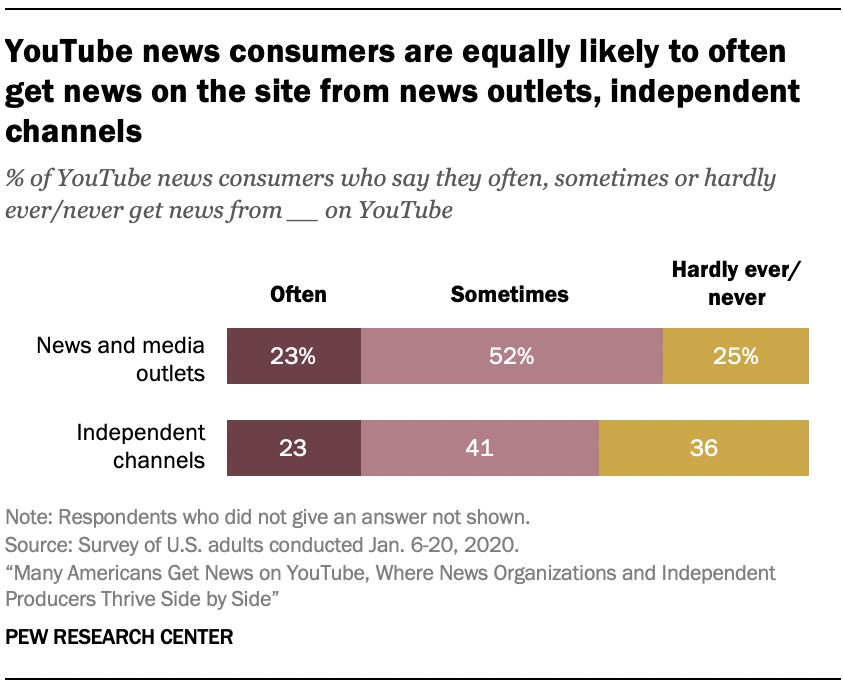 Americans who get news on YouTube have a variety of different sources to choose from on the site, from news organizations posting TV clips to commentators who’ve risen to fame via their YouTube videos. Overall, YouTube news consumers are as likely to say they “often” get news on the site from news and media outlets as they are to say the same about channels that aren’t affiliated with a news outlet.

Those in the youngest age group – 18- to 29-year-olds – are more likely to get news from independent channels than adults in older age groups. About three-in-ten younger adults (31%) do so often, compared with about one-in-five or fewer among the older age groups. There are no notable differences across the age groups in how often people get news on YouTube from news and media outlets.

Respondents who use YouTube for news were asked to describe in their own words what news topic they learned the most about from YouTube in the year before the survey was conducted in January 2020.

The most common topics named involved the Trump administration, including 20% who said they learned the most on YouTube about impeachment. (When the survey was fielded, the Senate was about to begin its trial.) An additional 13% named other topics related to President Trump or his administration.

Beyond impeachment, responses varied widely, with many pertaining to the U.S. government or domestic policy. No more than 4% of respondents named any particular issue within these broader categories, with the most common responses involving immigration, the 2020 Democratic primaries, or science and technology.

Next: 2. A closer look at the channels producing news on YouTube – and the videos themselves Next Page → ← Prev Page