The months-long coronavirus outbreak has impacted virtually all aspects of American life, including the 2020 presidential election – with many states and jurisdictions promoting the expanded use of mail-in ballots as a way to vote while avoiding the risks of infection for polling center volunteers or for voters standing in long lines and inside voting booths.

Yet as with so much of the environment in the U.S. today, voting by mail has become politically charged. Donald Trump has repeatedly decried voting by mail as an invitation for widespread fraud – though experts say there is almost no meaningful fraud associated with mail ballots – and Americans’ views on voting by mail now show a large partisan divide.

Most Americans are very aware of discussions about the impact of increased mail-in ballots on the election and of Trump’s public criticism of the U.S. postal system. But people come away with a very different sense of the facts surrounding that process – including whether mail-in ballots bring voter fraud – depending on their party and media diet. 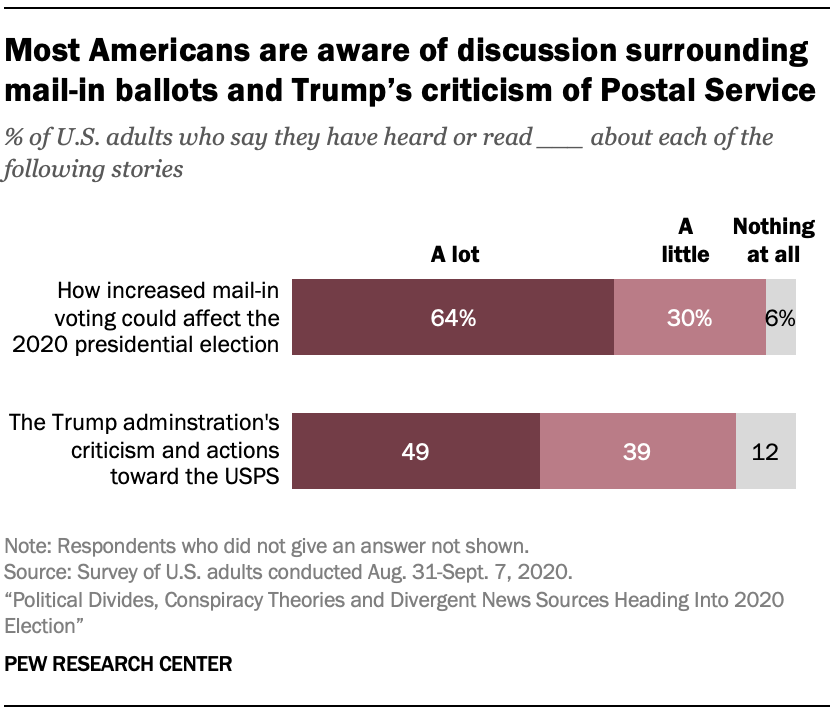 About two-thirds of U.S. adults (64%) say they have heard “a lot” about how increased mail-in voting could affect the 2020 presidential election. Another 30% have at least heard a little bit about it – leaving only 6% who haven’t heard anything at all. Most also are aware of Donald Trump and his administration’s criticism of and actions against the U.S. Postal Service: About half of U.S. adults (49%) have heard a lot about this and another 39% have heard a little. 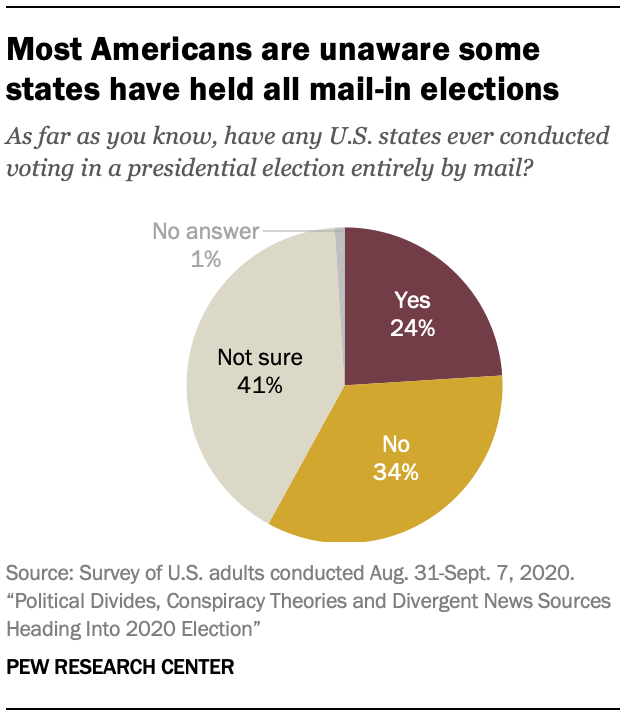 The survey finds broad uncertainty about whether states have held elections entirely by mail in the past, and whether that practice has increased voter fraud. Most U.S. adults either say that no U.S. states have ever conducted presidential voting entirely by mail (34%) or that they are unsure whether this has ever happened (41%). About a quarter of adults (24%) answer correctly that states have done this in past. (Four states have done so – Colorado, Oregon, Utah and Washington – and Hawaii will join as a fifth this year.) 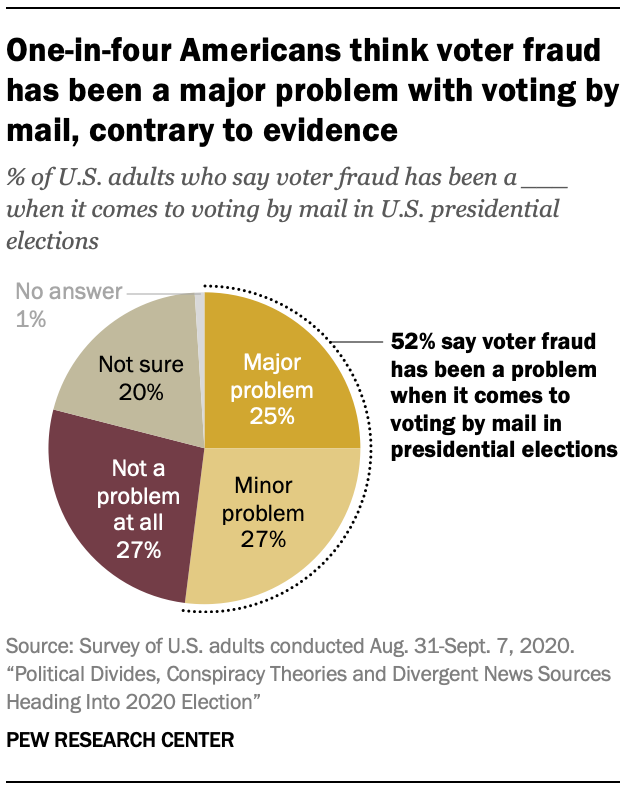 While experts say that there is minimal risk of increased voter fraud by mail, a quarter of U.S. adults say voter fraud has been a major problem when it comes to voting by mail. Another 27% say it’s been a minor problem, and an identical share say it has not been a problem at all. The remaining 20% say they are unsure.

Partisans share awareness of mail-in ballot debates, but disagree on the connection to voter fraud 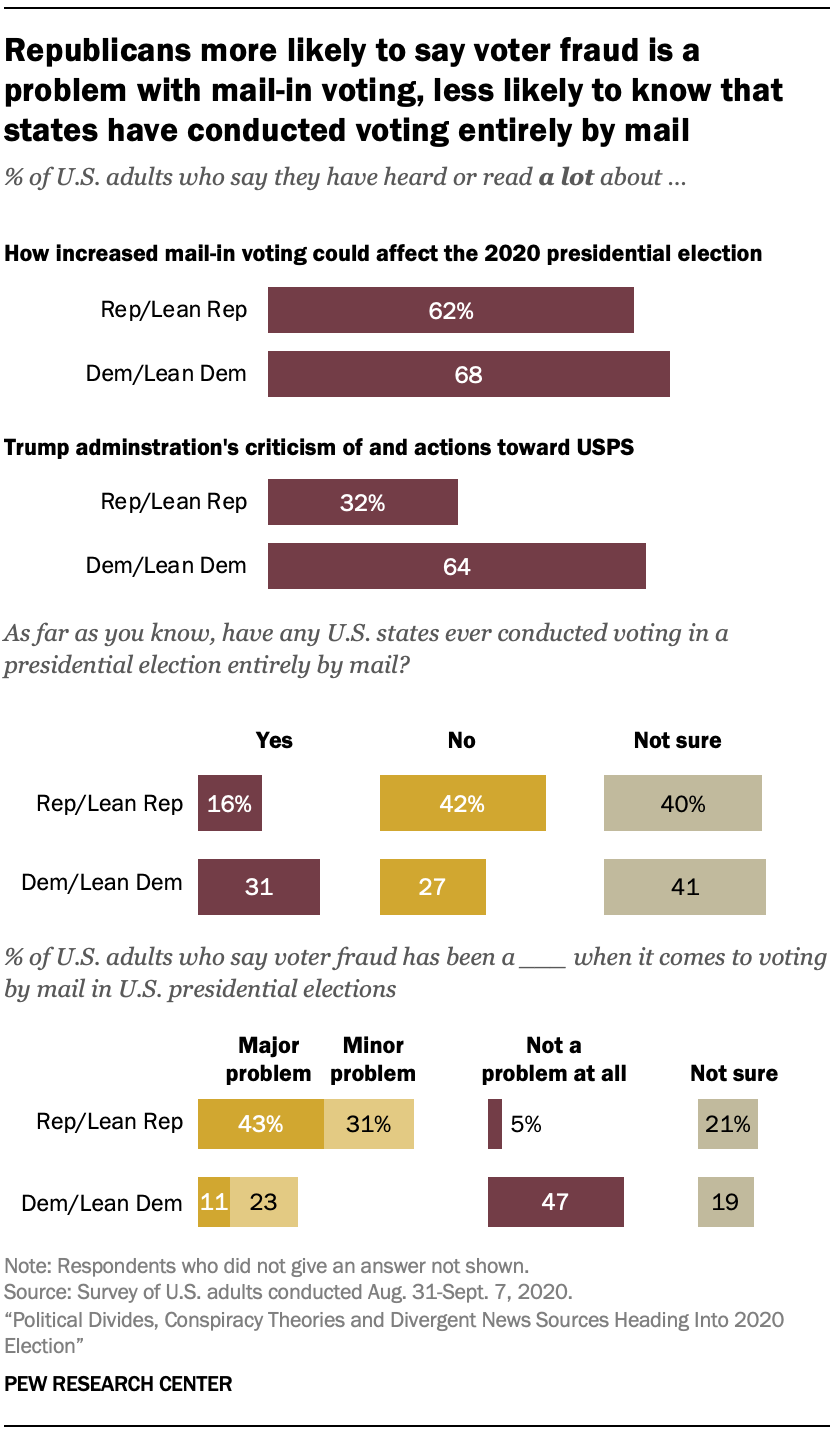 Awareness of the potential impact of increased voting by mail cuts across party lines, with majorities of both Republicans and Democrats having heard a lot about this in recent weeks. But while roughly two-thirds of Democrats and independents who lean Democratic (64%) say they have heard a lot about Trump’s criticism of the U.S. Postal Service, the same is true of only half as many Republicans and Republican leaners (32%). Still, a large majority of Republicans (86%) have heard at least a little about this topic.

Democrats are more likely than Republicans to know that some states have conducted presidential elections entirely by mail (31% vs. 16%). Conversely, 42% of Republicans say no states have ever done this, versus 27% of Democrats. Roughly four-in-ten in each party say they aren’t sure.

When it comes to potential fraud associated with mail-in ballots, about four-in-ten Republicans (43%) say collecting votes through mail-in ballots has been a major problem, and another 31% say it’s been a minor problem. Again, the evidence shows only miniscule voter fraud issues – though just 5% of Republicans say it is not a problem.

About two-in-ten on both sides of the aisle say they are not sure of the impact on voter fraud.

Within political parties, another area of difference emerges based on the news sources people rely on most. Respondents were asked whether each of eight news providers is a major or minor source of political and election news for them – or not a source at all. Researchers then grouped people within each party based on their mix of major news sources.

In this analysis, there are four media-usage groups among Republicans (including leaners): those who only indicated Fox News and/or talk radio shows like Sean Hannity and Rush Limbaugh as major news sources for political and election news (these are the two sources among the eight asked about whose audiences lean to the right politically); those who cited Fox News and/or talk radio as well as at least one of the other six news sources asked about; those who did not cite Fox News or talk radio as a major source but selected at least one of the others as a major source; and those who said that none of the eight providers mentioned in the survey are major sources of political news for them.

There also are four groups among Democrats (including leaners): those who cited only MSNBC, NPR, The Washington Post, The New York Times and/or CNN as a major news source (these are the five providers whose audiences lean left politically); those who cited one of the five as well as any of the others; those who did not cite any of the five but did cite at least one other; and those who did not cite any of the eight as major sources of political news. (For more details on how the news outlets were classified and the categories of news consumers, see the appendix.)

Again, other factors beyond media diet may influence people’s views of election-related issues, including the potential for fraud in mail-in voting. And someone’s media diet can be selected to fit their existing political views or be a significant factor in shaping those political views. Still, the data shows a clear connection between news diet within party and views on this issue.

Among both Republicans and Democrats, those who only rely on outlets with right- or left-leaning audiences, respectively, as key sources are the most likely to have heard a lot about the potential impact of mail-in ballots on the election. 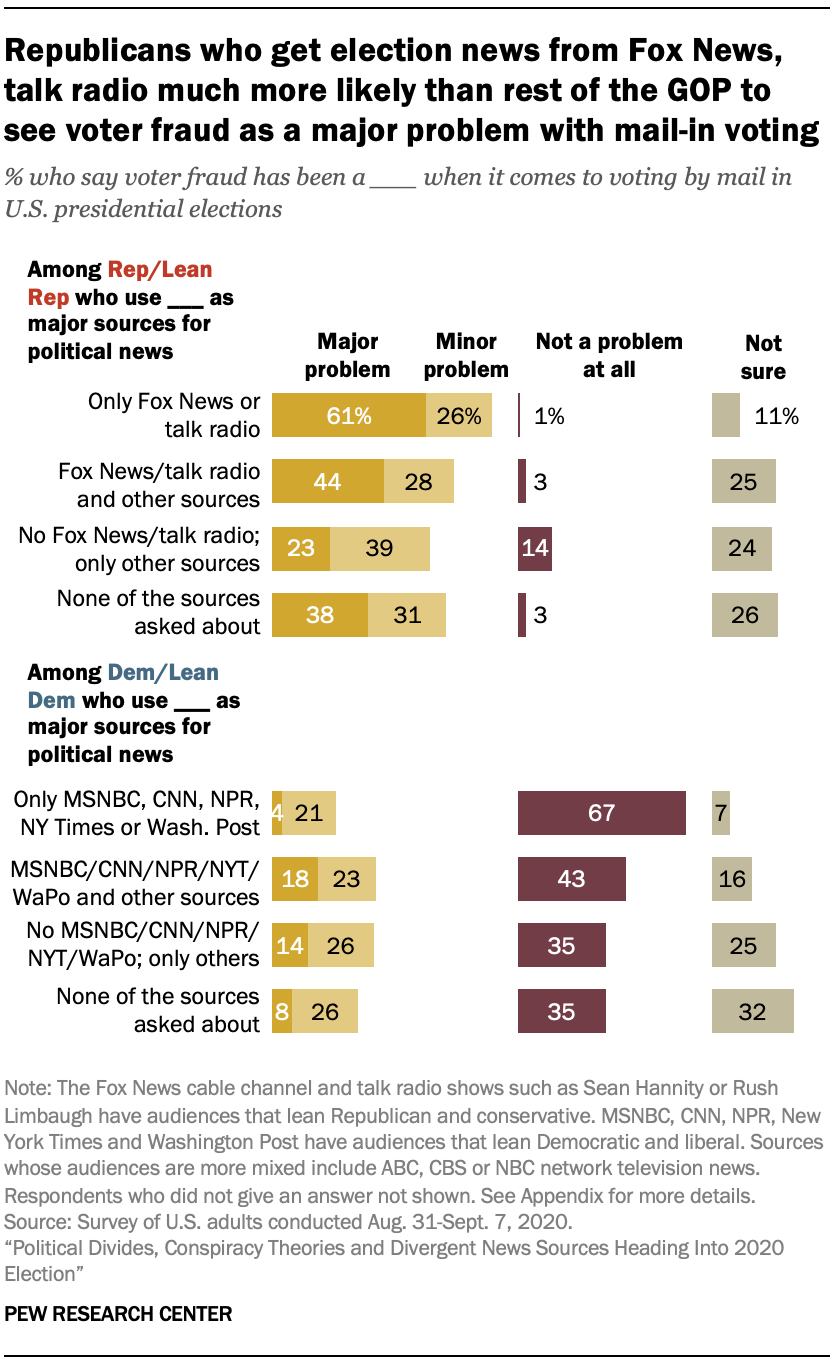 People’s news sources also are linked with what they know and perceive about the impact and use of mail voting. Fully 61% of Republicans who only cite Fox News and/or talk radio shows as key news sources say that fraud has been a major problem when mail-in ballots are used. That figure drops to 44% for Republicans who cite other outlets alongside Fox News and/or talk radio as major sources, then down to about a quarter (23%) among Republicans who don’t rely on Fox News or talk radio (but select at least one of the six other sources mentioned in the survey). Figures pop back up again among those who don’t select any of the eight outlets as major sources: 38% say fraud has been a major problem.

Democrats who cite only outlets with left-leaning audiences as key sources of political news are by far the most likely to say that voter fraud has not been a problem associated with mail-in ballots: 67% say this, compared with 43% of those who rely on some of these sources but also others. Democrats who don’t rely on any of the outlets with left-leaning audiences (or, in some cases, any of the eight major news sources mentioned in the survey) express greater uncertainty on this issue than other Democrats. 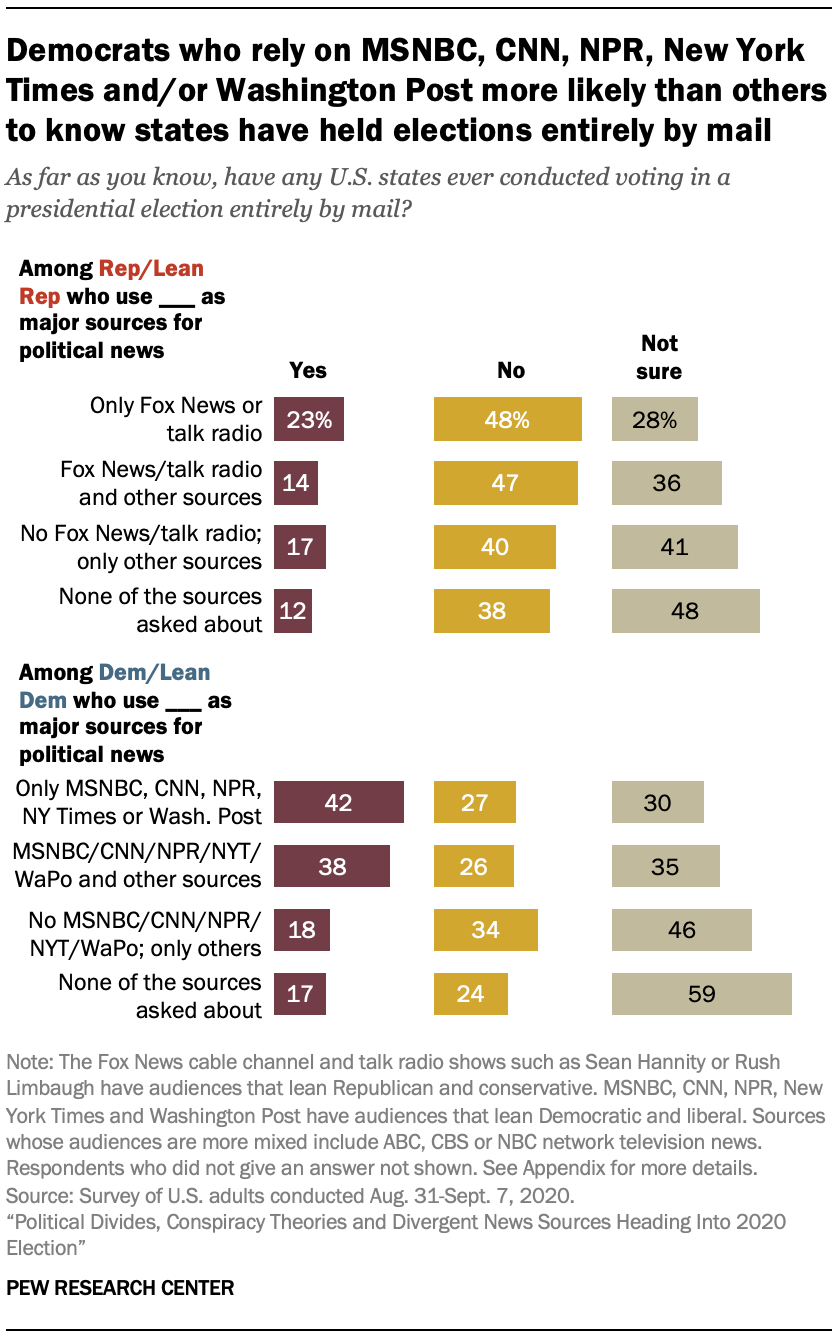 As noted above, Democrats overall are more likely to know that some states have held elections entirely by mail, but differences emerge among them based on their news sources.

Democrats who only rely on an outlet or outlets with left-leaning audiences as major news sources are far more likely than Democrats who don’t rely on any of these sources to answer correctly: about four-in-ten vs. about two-in-ten. Those who don’t turn to any of these sources with left-leaning audiences are more likely to say they are unsure.

Differences by news diet are more modest among Republicans, with no more than 23% in any media group correctly answering that states have held vote-by-mail elections. 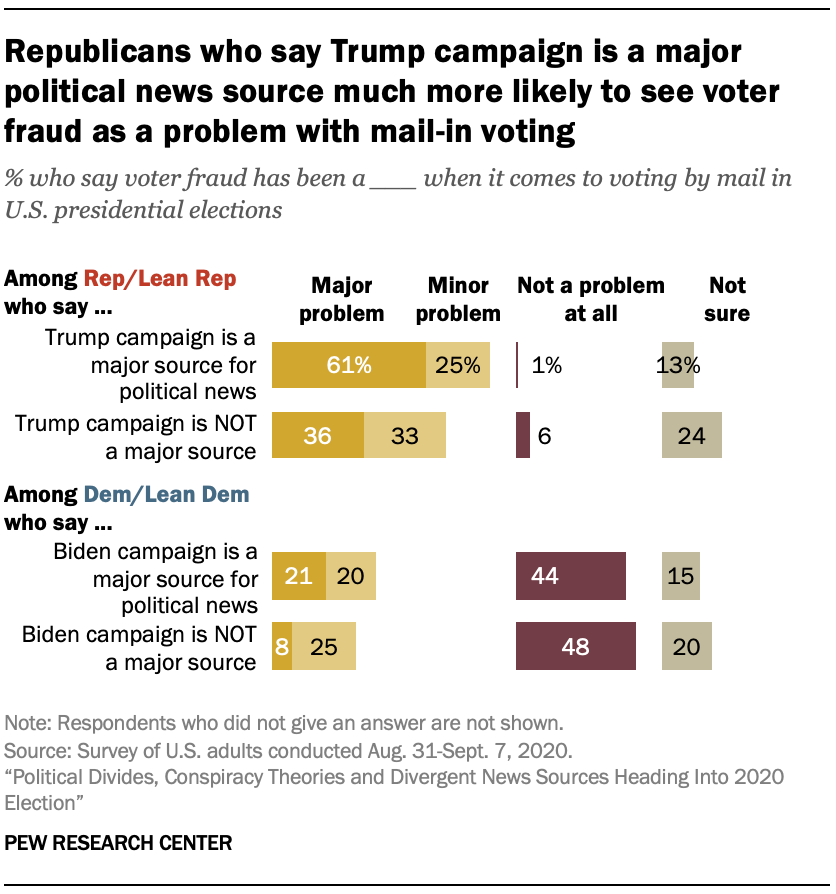 The 27% of Republicans who say Donald Trump and his campaign are a major source of election news for them share many of the same sentiments as those who cite only Fox News and talk radio as key sources of election news. Indeed, the same portion of both groups – 61% – say voter fraud has been a major problem surrounding mail-in voting. Another quarter say it has been a minor problem, while a mere 1% say it has not been a problem at all.

Among Democrats, there are more modest differences on this question between those who see Biden and his campaign as a major source of information for them (who make up 21% of all Democrats) and those who do not look to Biden’s campaign for election news – although Democrats who get news from the Biden campaign are somewhat more likely than others to see voter fraud over the mail as a major problem (21% vs. 8%).

Next: 2. Attention to candidates increases, but what Americans know and think about them diverges by party, media sources Next Page → ← Prev Page