This report also relies on previously reported data and findings from the yearlong study, including a previously published report that looked at more than 50 different Pew Research Center surveys conducted across several years and a report that looked at Americans’ attitudes of the news media during the COVID-19 outbreak. It also uses data from other Center studies on news coverage of the outbreak and of the protests in the wake of the killing of George Floyd.

Data in this report is drawn from the panel wave conducted Feb. 18 to March 2, 2020. A total of 10,300 panelists responded out of 11,036 who were sampled, for a response rate of 93%. This does not include six panelists who were removed from the data due to extremely high rates of refusal or straightlining. The cumulative response rate accounting for nonresponse to the recruitment surveys and attrition is 5%. The break-off rate among panelists who logged onto the survey and completed at least one item is 1.3%. The margin of sampling error for the full sample of 10,300 respondents is plus or minus 1.5 percentage points.

The subsample from the ATP consisted of 11,036 ATP members who responded to the Wave 57 survey and were still active. 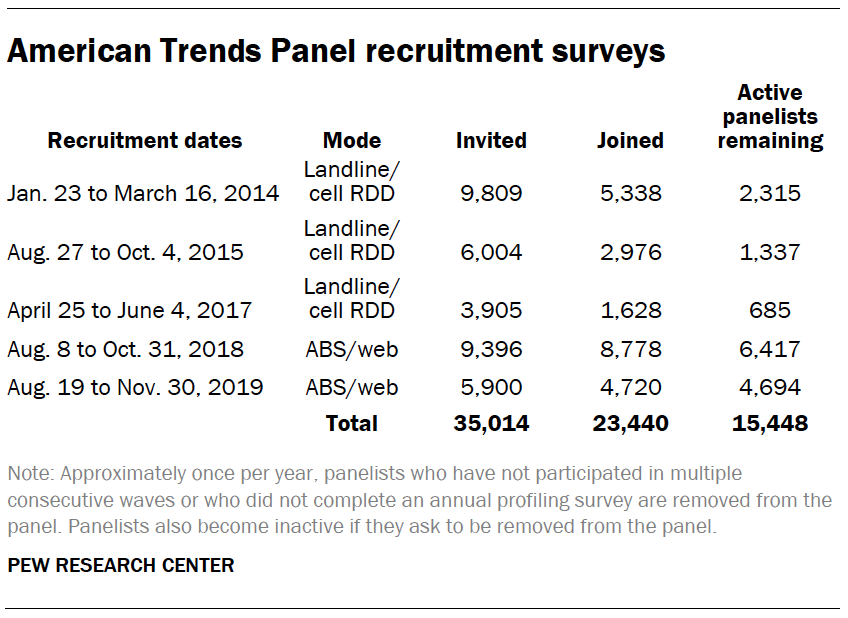 The U.S. Postal Service’s Delivery Sequence File has been estimated to cover as much as 98% of the population, although some studies suggest that the coverage could be in the low 90% range.8

One previously unreported survey question in this study comes from separate wave that was conducted August 3-16, 2020. A total of 13,200 panelists responded to that wave. The margin of sampling error for these 13,200 panelists is plus or minus 1.4 percentage points.

Finally, the analysis in this report also uses previously reported data from three other waves of the American Trends Panel (ATP), which were fielded during January, April and June 2020. For each, see the full methodologies for each of these three surveys below:

Pew Research Center conducted a series of focus groups as part of a yearlong study exploring Americans’ views of the news media. Ten focus groups were held across the following three cities: Houston, Texas; St. Louis, Missouri; and Charlotte, North Carolina. These three cities were chosen because of their demographics and recommendations by our vendor.

The primary goal of these focus groups was to inform the development of the survey that was conducted Feb. 18-March 2, 2020, among U.S. adults who are part of the Center’s American Trends Panel. This survey was the main source of data for this report. The report includes a number of quotations from the focus groups to help illustrate and add nuance to the survey findings. Quotations are chosen to provide context and are not necessarily representative of the majority opinion in any particular group or city. Quotations may have been edited for grammar, spelling and clarity.

Each group consisted of six adults coming together for about an hour and a half for a discussion led by a professional moderator using a guide developed by Pew Research Center. Many of the groups were made up of people of one demographic characteristic. Beyond that demographic characteristic, each of the groups was recruited to have a mix of other characteristics and attitudes as appropriate, including gender, education, income, age, race or ethnicity, political party affiliation, urban and rural location, employment status and amount of trust in the news media. Finally, aside from one of the groups in St. Louis which focused on “less newsy” Americans, all groups required participants to follow the news at least some of the time. The 10 focus groups are the following:

Ipsos Inc. worked with local field partners in each of the three cities to recruit the participants using a screener designed by Pew Research Center. All participants were given financial remuneration for their time.

CORRECTION (September 2020): A previous version of this methodology statement contained an incorrect description of the base weighting for this survey. None of the study findings or conclusions are affected.