5. Black Americans see representation as key in determining how they stay informed

People in different subgroups within the U.S. population often have different views of, relationships with and priorities for the news media. Partisanship is among the strongest divides, with Republicans expressing much more negativity toward the media than Democrats (see Chapter 4). But striking divisions also emerge between other groups in the country, including racial and ethnic groups, age groups, and people who rely on different pathways for political news – particularly when that pathway is social media.

Black, Hispanic and White Americans often have different perspectives as they navigate the information environment to get news they trust. Black adults have clear priorities, which are different from those of White adults, in what they look for in their news sources. 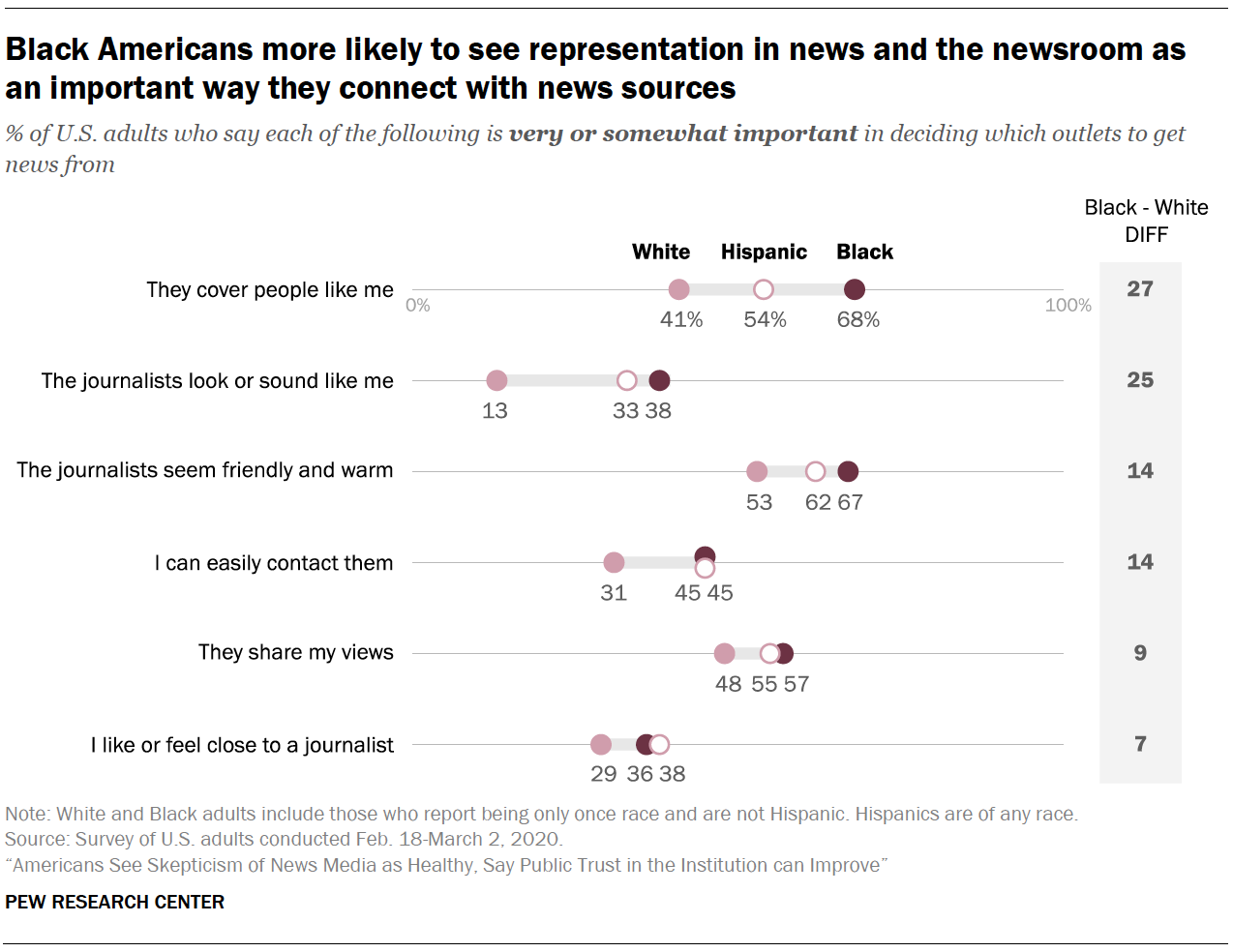 Americans were asked whether six different aspects of how news outlets connect with their audiences are important in deciding where to get their news from. Black Americans, and to a somewhat lesser extent Hispanic Americans, are more likely than White Americans to say each of these factors is important, but those relating to representation – both in newsrooms and in coverage – stand out as especially important or unique priorities for Black people.

Nearly seven-in-ten Black adults (68%) say that it is at least somewhat important to look for news outlets that cover people like them in stories, 27 percentage points higher than White Americans (41%) and also higher than Hispanic Americans (54%). And both Black (38%) and Hispanic (33%) Americans are much more likely than Whites (13%) to say it is at least somewhat important that the journalists look or sound like them, though this priority does not rise to the top for any of these groups.

“For me, for the news stations, we live in America where diversity counts; so, I also look at a station that actually is fully diverse and, of course, have a format that is conducive to the entire population. … Well, in terms of being fully diverse, in terms of staff, it’s very important to me, I’m able to have my kids see individuals like themselves, too. And in terms of their reporting, it’s not just limited just to specific topics, only to breaking news, but they incorporate topics that actually reach out to a broad spectrum of not only community, but America itself.” – Black man, 64

“But I’ll just say it like this: It’s important for me, if I were to watch the news daily, in terms of a specific channel or something like that, that I see diversity in the company, in terms of who they present on TV. … I think America’s very diverse. And I think sometimes we don’t get to see a reflection of that diversity in places like news channels, and who presents, who’s the anchor. And these discussions that we’ve talked about, that newscasters have sometimes, it’ll be a panel just all one race.” – Multiracial woman, 24

These divides are in line with previous findings that Black Americans are far more likely than White or Hispanic Americans to feel that their race or some other demographic characteristic is what news organizations most misunderstand about them.

Discussions about representation in newsrooms have become amplified in the wake of the protests in response to the police killing of George Floyd. While these survey questions were asked before the protests, the divisions speak to how much Black Americans and, to a lesser extent, Hispanic Americans see representation as important in how they stay informed. And according to a recent Pew Research Center analysis of U.S. Census data on newsroom employment, Black Americans tend to be underrepresented in U.S. newsrooms overall relative to White Americans.

Younger Americans, those who rely on social media for political news largely feel disconnected from their news sources

Two other subgroups – young adults and those who rely on social media for their political news – distinctly stand out for how they connect with news outlets: Both tend to feel disconnected from their sources of news.

Young adults are less likely to feel loyal to or valued by their news sources. About a quarter of Americans ages 18 to 29 (23%) say that they consider themselves to be loyal to the sources they get their news from, compared with about twice that share among those ages 65 and older (49%). And while 29% of adults under 30 say they feel valued by their news sources, this jumps 20 percentage points among the oldest age cohort. On both measures, those ages 30 to 49 and 50 to 64 fall somewhere in between. Younger adults also are somewhat less likely than their elders to feel that news organizations understand them. 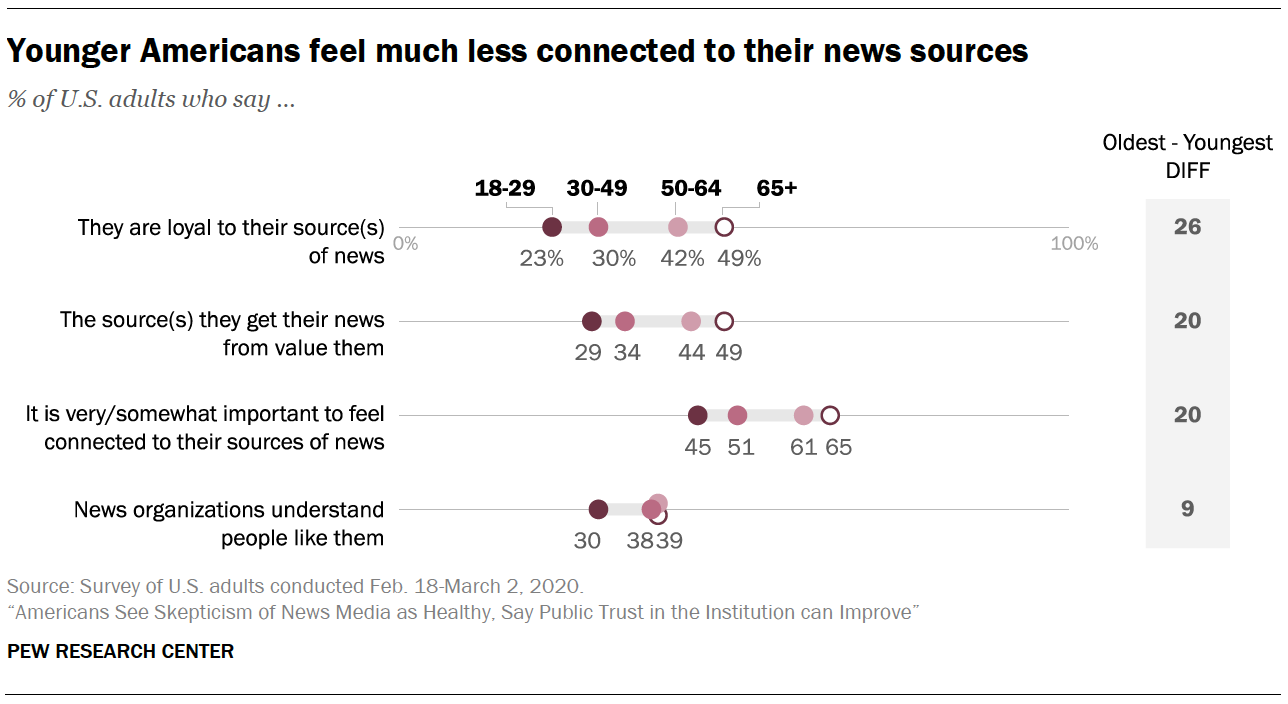 Similarly, the nearly one-in-five Americans who rely on social media for political news are less likely than others to feel connected to their news sources. This group also tends to be young, but the relationship largely persists even when accounting for age differences between those who get most of their news on social media versus those who get news in other ways.

Those who rely on social media the most for their political news are less likely to feel loyal to or valued by their sources of news than those who rely on other pathways – including TV (network, local or cable), print, radio, or news websites or apps. They are less likely to feel loyal to their news sources (21%) or valued by them (25%), and they also fall near the bottom in the share who feel that news organizations understand people like them. 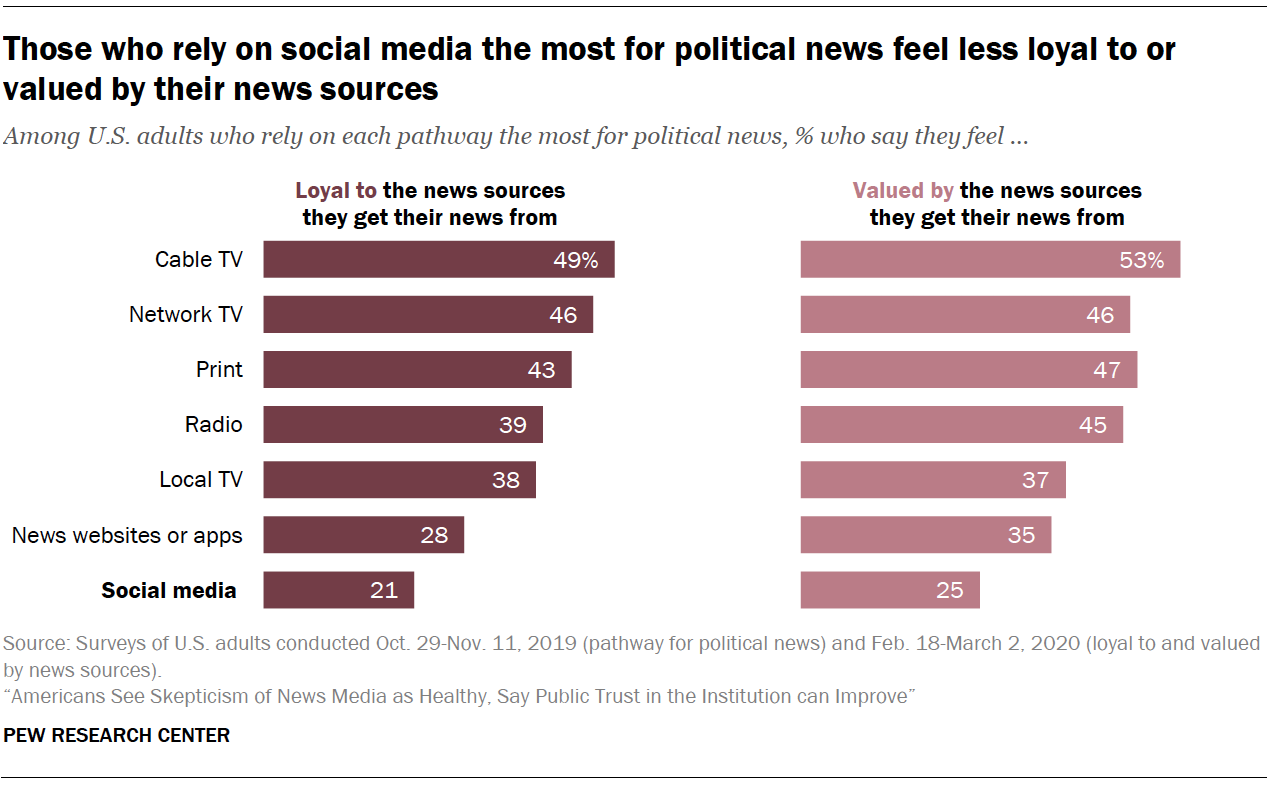