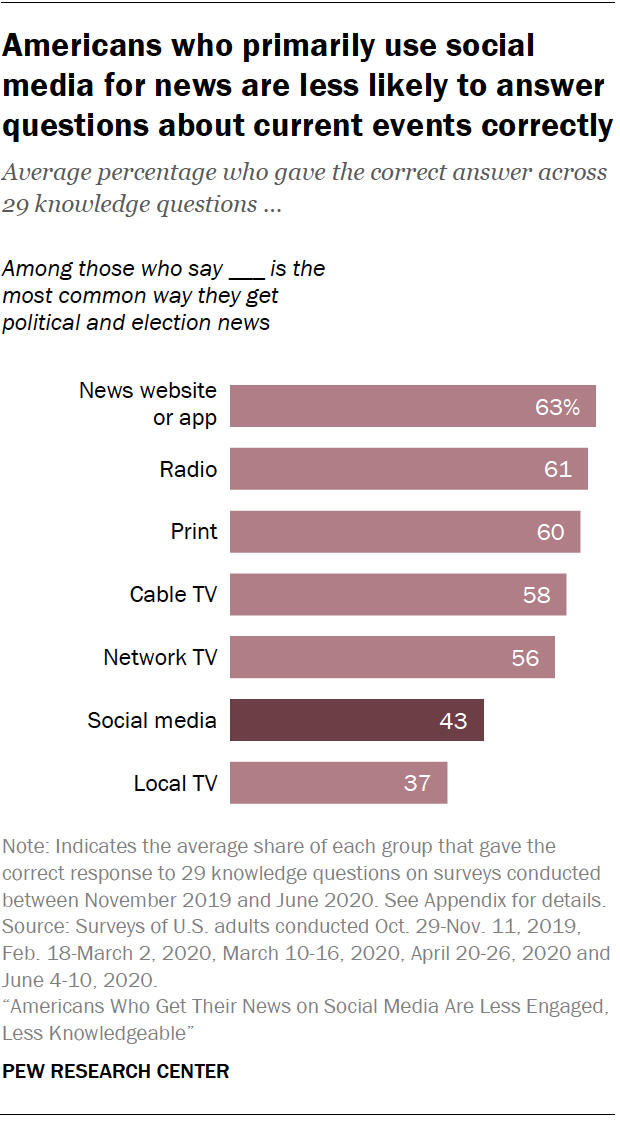 U.S. adults whose most common way of getting political and election news is social media lag behind Americans who turn to most other sources of news in their knowledge and understanding of the COVID-19 outbreak, politics and other current events.

Between October 2019 and June 2020, the American News Pathways project asked 29 fact-based knowledge questions about a variety of topics. These questions touched on the presidential election, the economy, the major political parties, Donald Trump’s impeachment and, more recently, the coronavirus outbreak. (See Appendix for question details.)

For each of these 29 questions, researchers calculated the percentage who gave the correct answer in each of seven groups of news consumers based on the most common pathway they use to get political news. Researchers then averaged these percentages across all questions to identify the general level of knowledge among these different types of news consumers.

The group of Americans who rely the most on social media for political news were generally less likely than others to give the correct answers across these 29 questions: On average, about four-in-ten of these social media news consumers (43%) gave the right answer. The only comparable group is those adults who watch local television the most for political news, 37% of whom answered each question correctly on average. In every other group, more than half gave correct answers, on average, ranging from 56% among those who turn most to national network TV to 63% among those who rely most on news websites or apps.

It is not that most adults who rely on social media for political news chose wrong answers to these 29 questions. Instead, they were much more likely to say they were not sure: An average of 39% of social media news users said they did not know the answer across these questions.

What do those who get most of their news from social media know about the coronavirus outbreak? 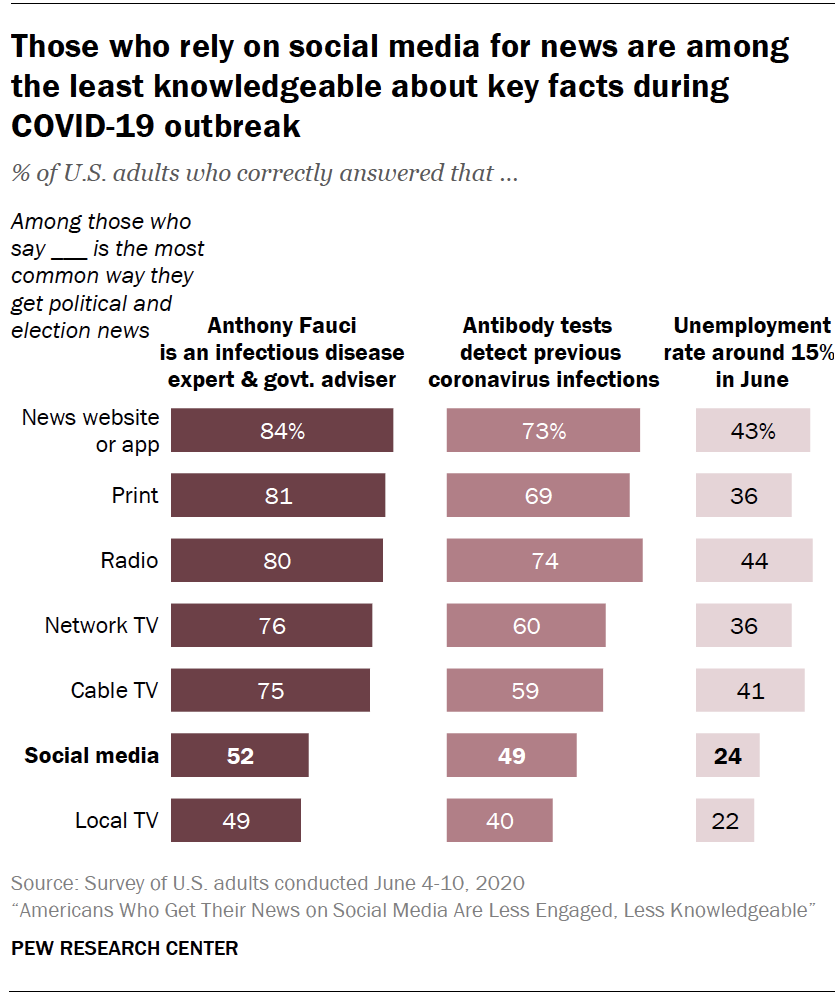 Diving deeper into the 29 knowledge questions the American News Pathways project has asked over the past few months reveals some specific areas and topics where news users who most commonly turn to social media to get political news know less than other Americans.

A June 2020 survey asked U.S. adults what they knew about a few facts relevant to the coronavirus outbreak and its impact on the economy. These questions included one asking respondents to identify Anthony Fauci’s role as an infectious disease expert and government adviser, another about the purpose of coronavirus antibody tests and a third about the employment rate during the pandemic.

Americans who rely most on social media for getting political and election news were among the least likely to get these questions right. For example, about half of this group (52%) correctly identified Fauci as an infectious disease expert and government health adviser, similar to the share among those who rely on local television (49%). The other news consumer groups all performed much better on this question; three-quarters or more knew Fauci’s role.

There is a similar pattern on the question about antibody tests. About half of those who get their political news from social media (49%) correctly said that antibody tests for the coronavirus are intended to detect a previous infection, compared with about six-in-ten or more in most other groups. (The local TV group is again the exception, with only 40% answering this question correctly.)

Measuring the unemployment rate has been difficult and sometimes confusing during the coronavirus outbreak, perhaps leading to nearly as many Americans saying they weren’t sure (28%) as giving the correct answer (34%) that the official unemployment rate number at the time the survey was conducted (June 4-10) was around 15%. (This answer was the closest option to both the initial estimate of 13.3% and the later revised estimate of 16.3%.) Again, however, adults who rely most on social media (24%) or local TV (22%) were less likely than others to correctly say unemployment was officially around 15% at the time.1 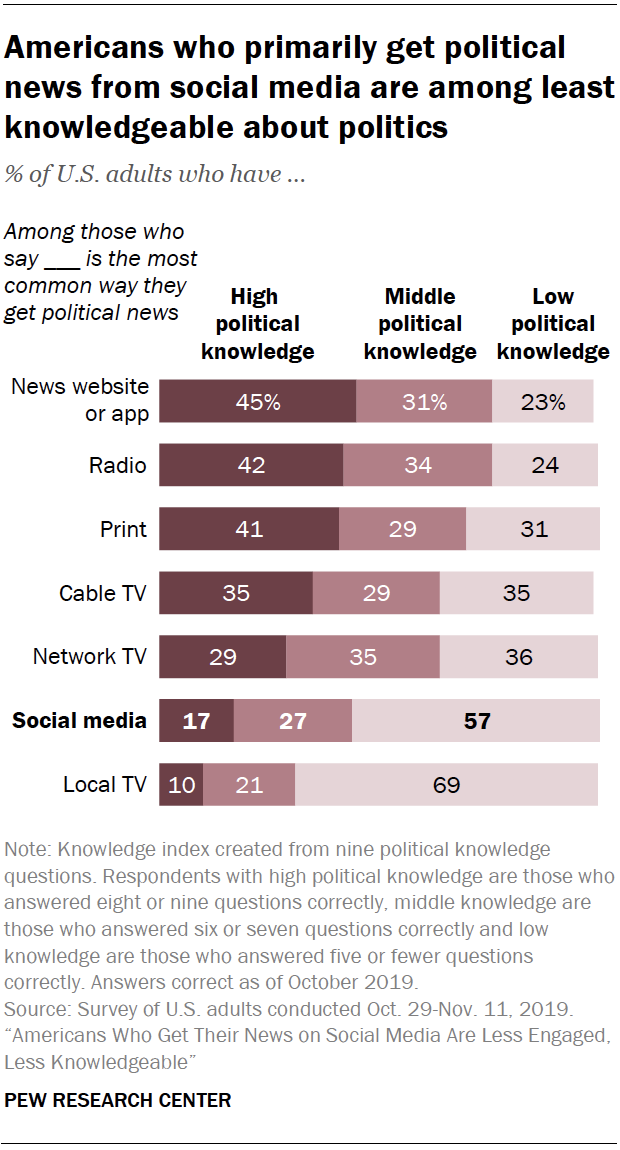 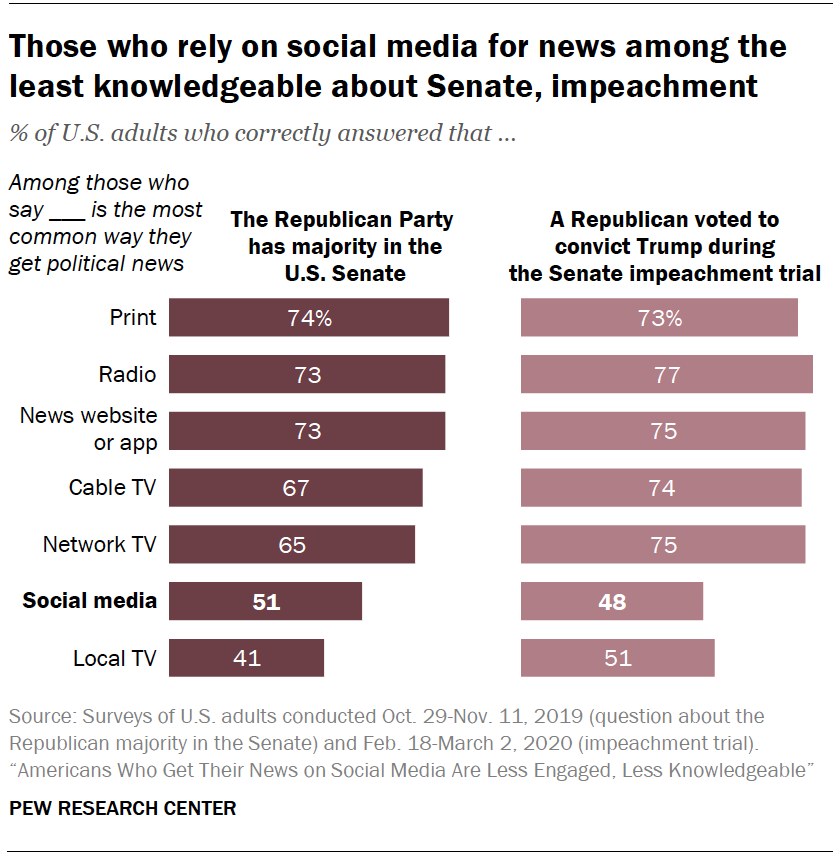 To give one specific example of a question included in the political knowledge index – about the fact that the Republican Party currently has a majority in the U.S. Senate – people who rely most on social media were much less likely to know this than other groups of news consumers (with the exception of those who rely most on local TV). About half of these social media news consumers (51%) knew this at the time of the survey last fall, compared with about two-thirds or more in most other groups. 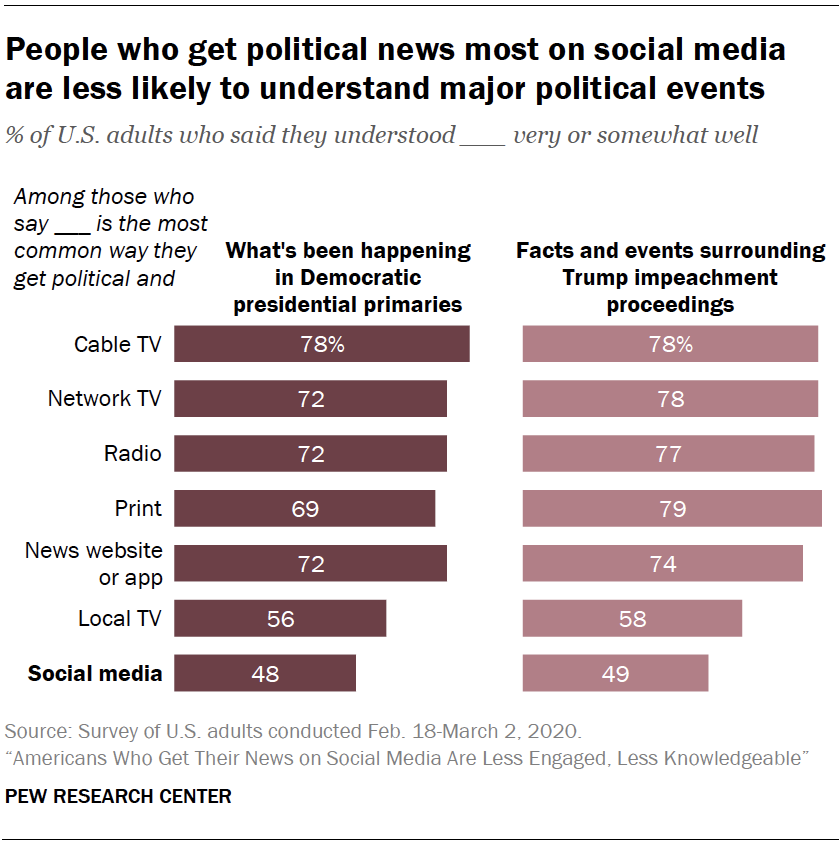 U.S. adults who rely most on social media for political and election news not only were less likely to answer fact-based questions about politics correctly, but they were also the least likely group to say they understand certain news stories.

In early 2019, with the Democratic presidential primary in full swing, only about half of those who most commonly get their political news on social media said they understood very or somewhat well what was happening in the Democratic presidential primaries (48%) or the facts and events surrounding the impeachment proceedings (49%). The group relying most on local TV expressed higher confidence that they understood these events (56% and 58%, respectively). About seven-in-ten or more in the other groups said they understood very or somewhat well.

Next: 4. In addition to lower awareness of current events, social media news users hear more about some unproven claims Next Page → ← Prev Page