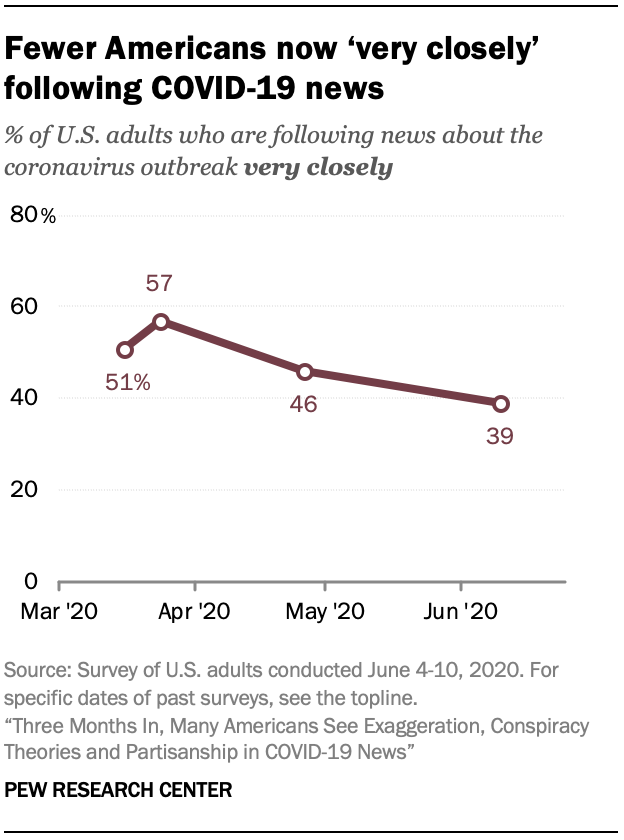 A large majority of Americans (86%) surveyed from June 4-10 say they are following news about the COVID-19 outbreak “very” or “fairly” closely. That portion is close to the share who said the same in March and April, when between 87% and 92% were following the outbreak very or fairly closely.

But the June survey, which took place as demonstrations following the killing of George Floyd were dominating headlines, shows a decrease in those paying very close attention to the COVID-19 outbreak. The 39% of U.S. adults reporting this highest level of engagement is down from 46% in late April and 57% in late March, when the outbreak was first forcing shutdowns around the country.

While Americans on both sides of the political aisle are about equally likely to be keeping up with coronavirus news at least fairly closely, Democrats and those who lean Democratic are somewhat more likely than Republicans and GOP leaners to be following it very closely (44% vs. 35%). The partisan gap on this question has widened slightly since March and April.

Americans say they are seeing more partisan views in coronavirus coverage, with a plurality becoming less certain about what is true 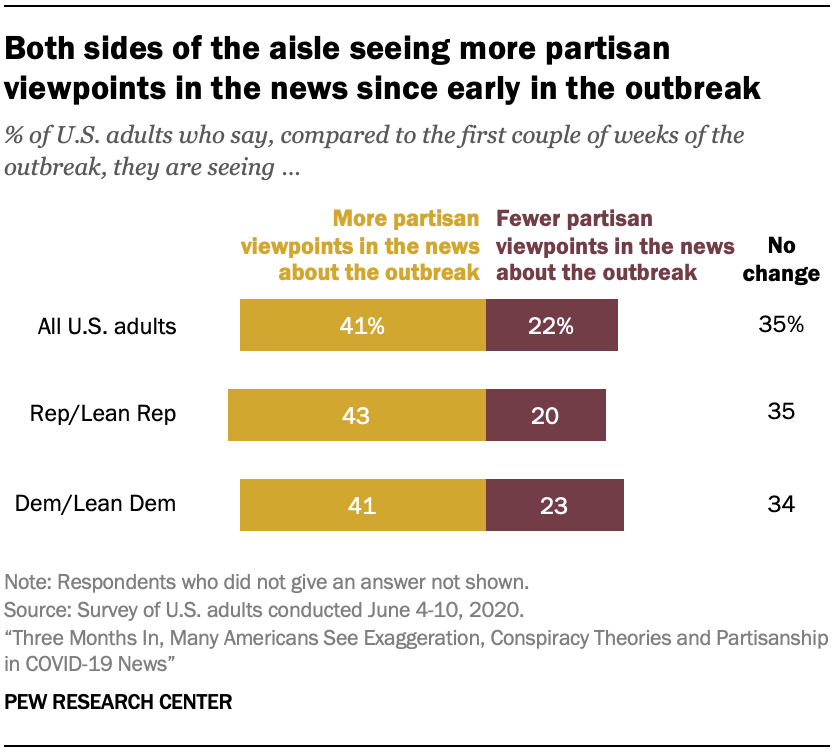 In following coronavirus news over the last several months, Americans sense that the news that they see has become more political – and, in some cases, that it has become harder to determine what is true and false.

Overall, about four-in-ten U.S. adults (41%) say they are now seeing more partisan viewpoints in the news about the outbreak compared with the first couple of weeks of the outbreak in the U.S. That is about twice the share who say they are seeing less partisanship in coronavirus coverage (22%). Roughly a third (35%) say they have not noticed a change in this area.

In a rare instance of bipartisan agreement, Democrats and Republicans offer similar responses on this question, with about four-in-ten in each group saying they have seen a rise in partisan viewpoints in coronavirus news.

Americans who rely most on local news outlets for COVID-19 news are less likely than others to say they have seen a rise in partisanship (28%) and more likely to have seen no change (42%). 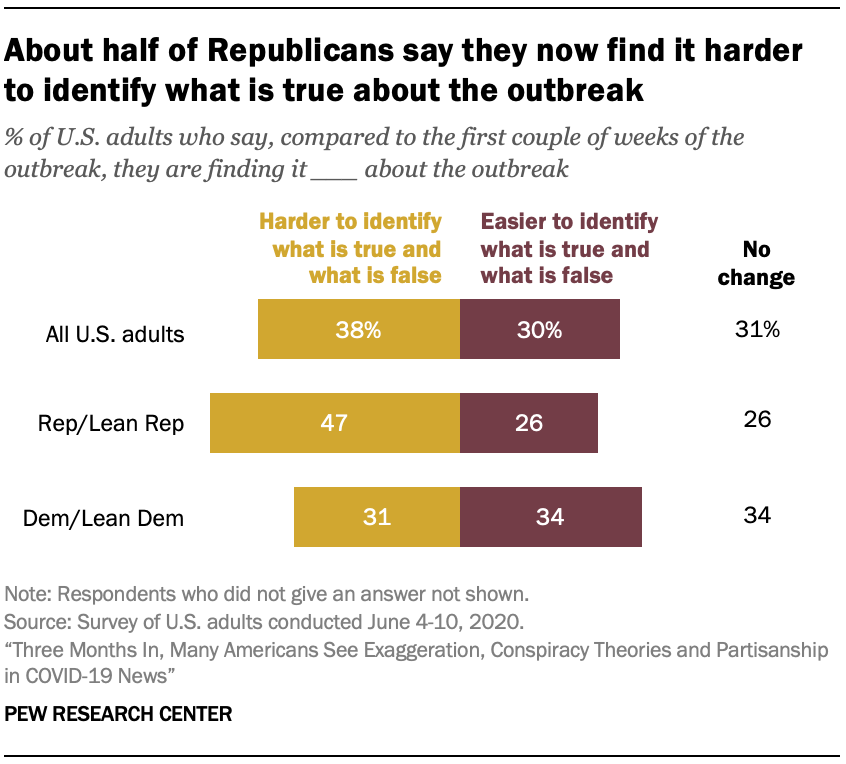 Along with the perceived rise in partisan views in coronavirus coverage, a plurality of Americans (38%) say that, compared with the first few weeks of the outbreak, it has become harder to identify what is true and false about the COVID-19 outbreak. That group is modestly larger than the 30% who say it has become easier over time, while a similar share (31%) say there has been no change in their ability to discern truth from falsehoods. 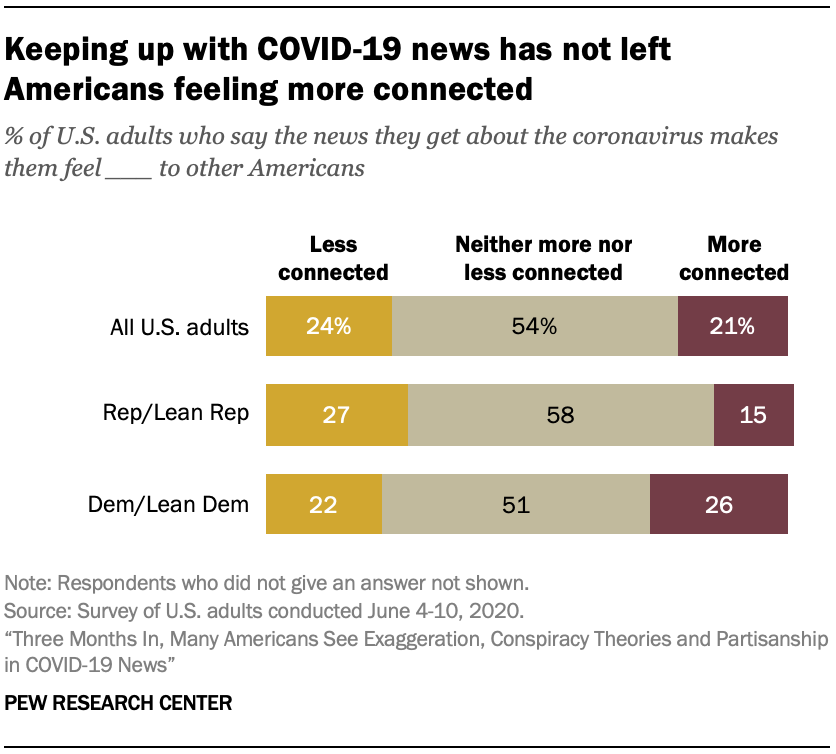 Democrats are somewhat more likely than Republicans to say coronavirus news is giving them a feeling of connection to other Americans (26% vs. 15%), but this is still a minority view among Democrats.

Next: 3. Most Americans have heard of the conspiracy theory that the COVID-19 outbreak was planned, and about one-third of those aware of it say it might be true Next Page → ← Prev Page