1. Americans rate CDC highly, Trump and his administration poorly on getting the facts right about COVID-19 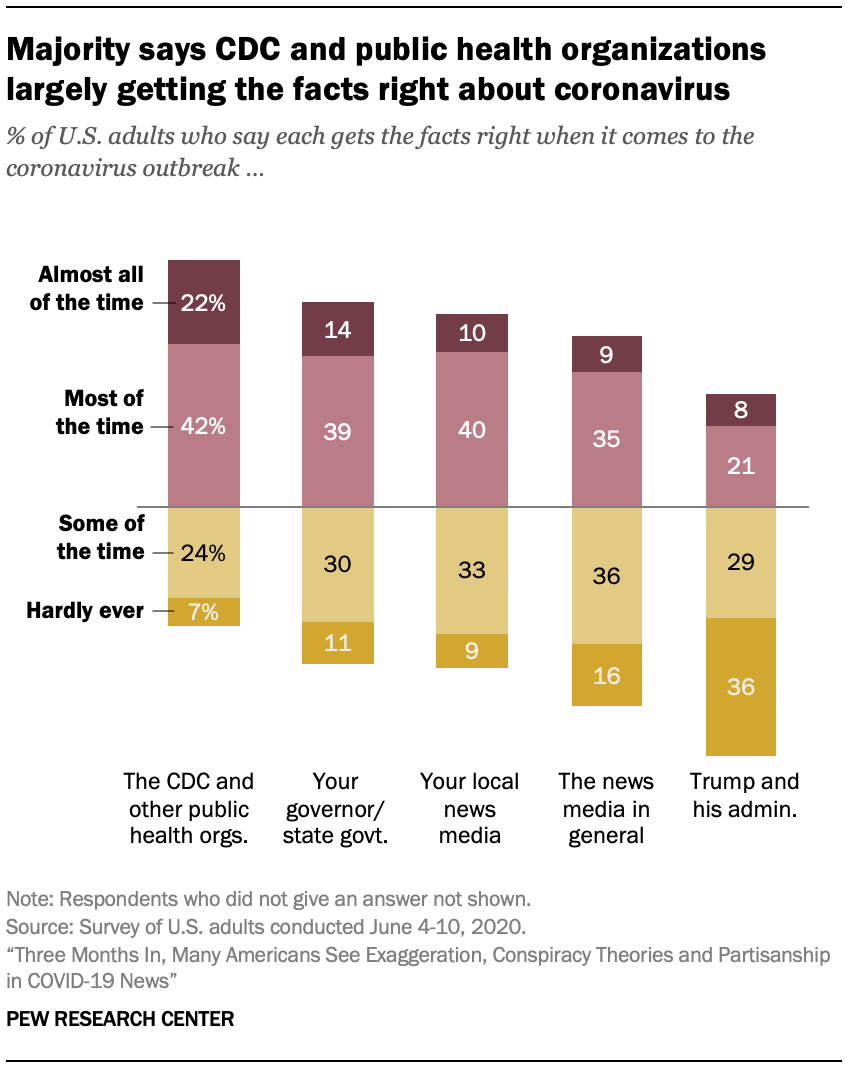 Americans are skeptical about whether some key sources for news and information are getting the facts right about the coronavirus outbreak. Of five types of sources on the survey, only one garners a clear majority saying it gets the facts about the outbreak right at least most of the time.

Nearly two-thirds of U.S. adults (64%) say the CDC and other public health organizations get the facts right about the coronavirus outbreak “almost all” (22%) or “most” (42%) of the time. About half of Americans say the same of their governor and state government (53%) and of their local news media (50%), while 44% have such confidence in the news media in general.

Donald Trump and his administration get the lowest rating: Just three-in-ten Americans (30%) say the White House gets the facts right about the outbreak more often than not. Instead, about two-thirds of Americans (65%) say Trump and his administration get the facts right “some of the time” or “hardly ever.” The 36% who say the Trump administration “hardly ever” gets the facts right about the pandemic is more than double the share who say the same about any of the other sources, including the news media (16%). (These assessments generally match the public’s overall ratings, in early May, of how well some of these groups were responding to the outbreak.) 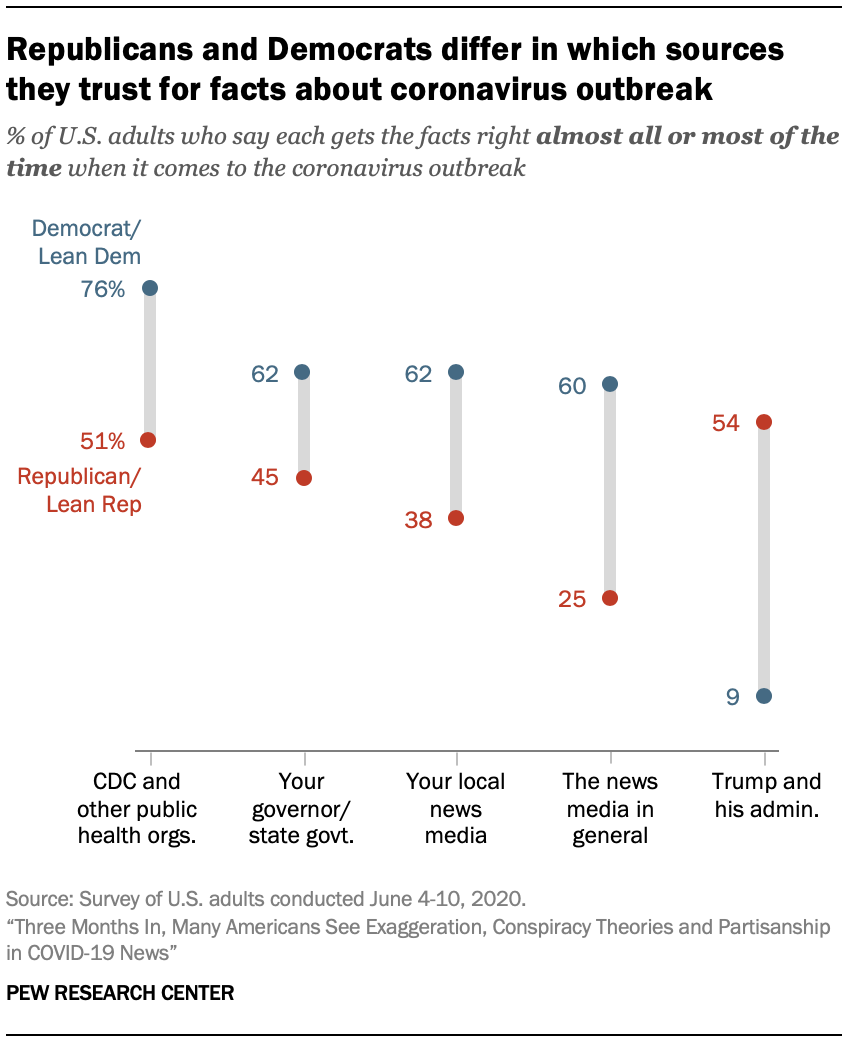 Republicans and Democrats (each including independents who lean toward either party) disagree sharply over how frequently these sources of information get the facts right about the coronavirus outbreak, with a gap of at least 15 percentage points for each source.

The only source that gets a higher rating among Republicans than Democrats is Trump and his administration: 54% of Republicans say the White House gets the facts right at least most of the time, compared with only about one-in-ten Democrats (9%). The share of Republicans who trust the information they are getting from the administration is similar to the share in the GOP who say the same about the CDC and other public health organizations (51%).

A growing share of Americans say the outbreak has been overblown 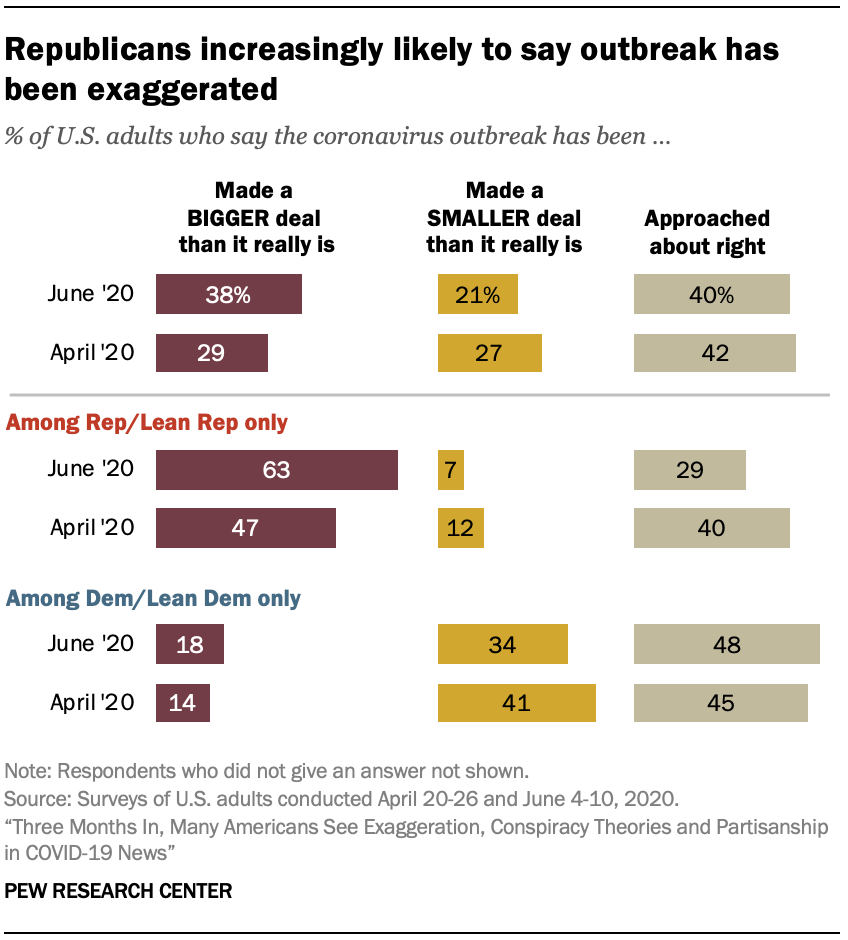 Between late April, when the coronavirus outbreak dominated news coverage, and early June, when the news shifted some of its focus to the protests over the killing of George Floyd by a police officer during an arrest, the share of U.S. adults who say the coronavirus outbreak has been overblown – “made a bigger deal than it really is” – rose by 9 percentage points (from 29% to 38%). Meanwhile, the share saying the opposite – that the pandemic has been “made a smaller deal than it really is” – declined 6 points over the same period (from 27% to 21%). In both surveys, about four-in-ten Americans said it has been “approached about right” (42% in April and 40% in June).

The biggest change occurred among Republicans and independents who lean Republican. The share of this group who say the outbreak has been exaggerated grew from 47% in late April to 63% in early June. Fewer Republicans, as of early June, say it has received about the right amount of attention (declining from 40% in April to 29% in June) or gotten less attention than it deserved (12% vs. 7%).

Views about the outbreak’s seriousness have shifted to a lesser degree among Democrats and Democratic leaners, although fewer Democrats now say the outbreak has been underplayed (41% in April vs. 34% in June), while slightly more say it has been overblown (14% in April to 18% in early June). 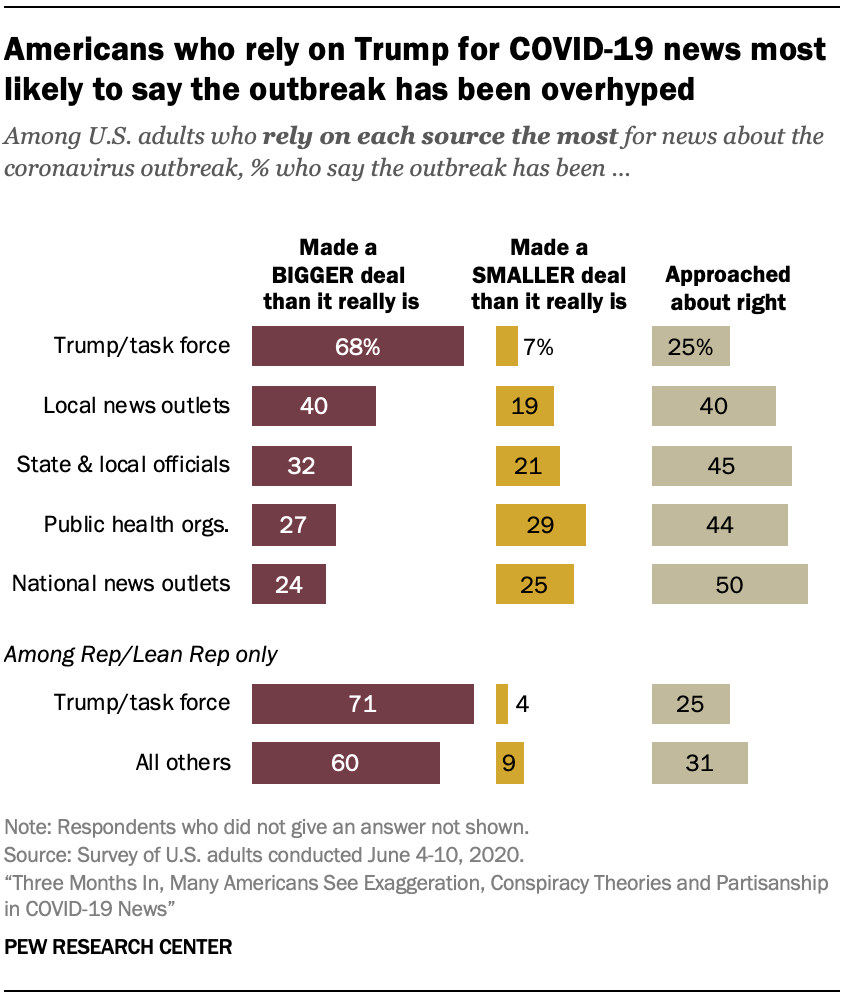 The sources people rely on most for news about the coronavirus outbreak are closely linked with their opinions about the severity of the outbreak.

Four-in-ten Americans who rely most on local news outlets for coronavirus news (40%) say too much has been made of the outbreak, followed by those most reliant on state and local officials (32%), public health organizations (27%) and national news outlets (24%). The shares who say it has received the proper amount of attention go in roughly the opposite direction, with those relying on national news (50%) the most likely to say this and those relying on Trump the least likely (25%).

Americans who turn to Trump and the White House task force also are the least likely to say the outbreak has been underplayed, with just 7% taking this view – compared with about one-in-five or more in each of the other groups. U.S. adults who look to public health organizations or the national news media for coronavirus news are just as likely to say the outbreak has received too little attention as they are to say it has gotten too much.

Next: 2. Americans still follow COVID-19 news, though with less intensity; many say this news is becoming more political Next Page → ← Prev Page