1. Posts about COVID-19 appeared in a wide range of public Facebook spaces 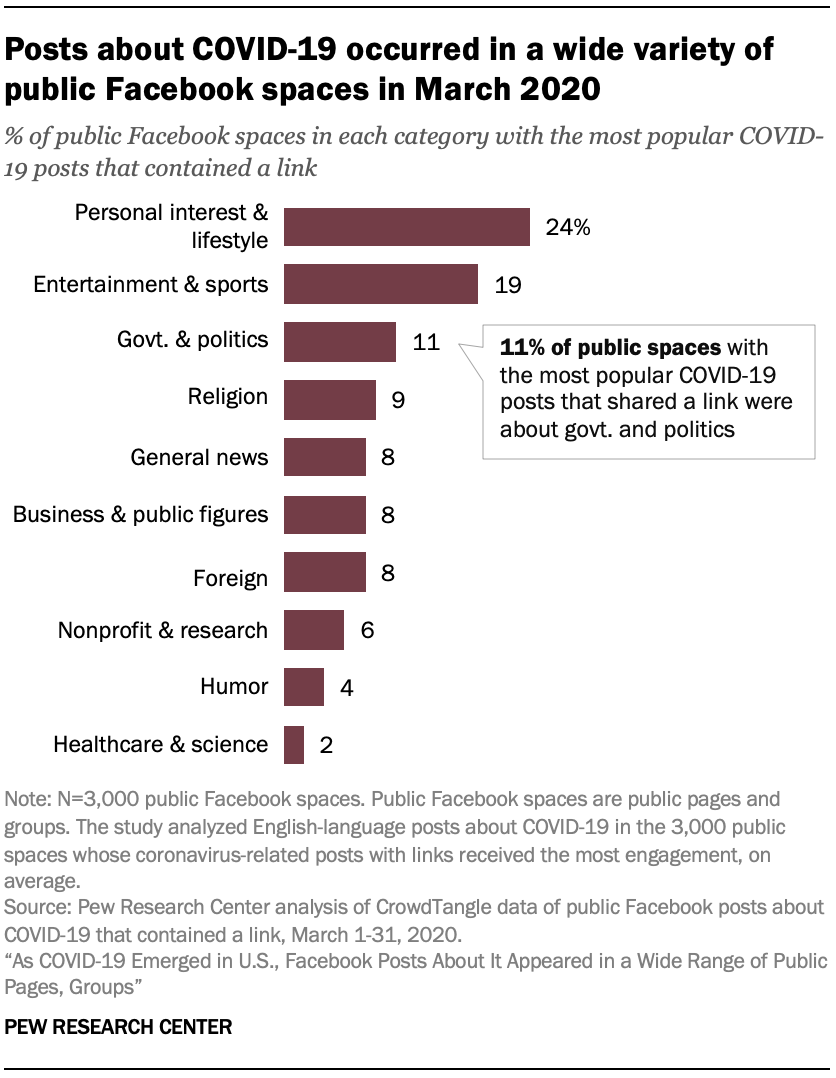 As Americans grew more aware of the threat posed by the novel coronavirus, social media became a key avenue for following related developments. This study, which examined 3,000 public Facebook spaces with the most popular COVID-19 posts in March 2020, aimed to bring to light the types of spaces where these conversations took place. (The most popular Facebook spaces were those with the highest average number of interactions on their coronavirus-related posts that contained a link.)

Across the public Facebook spaces studied, about a quarter (24%) were largely oriented around issues of personal interest and lifestyle, while roughly one-in-five (19%) were spaces dedicated to entertainment or sports. Personal interest and lifestyle spaces focused on a range of broad topics, including parenting (e.g. “Scary Mommy” or “Informed Parents of California”), local interests (e.g., “RANDOM VEGAS!! (pics & vids)” or “Seattle Vintage”) and food (e.g., “LIVEKINDLY” or “Tasty recipes”). Many of the entertainment (15% of all public spaces) or sports (4% of all public spaces) spaces centered on a specific actor, musician or sports team.

A slightly smaller percentage (6%) identified with a nonprofit group or research organization, including universities and fact-checking organizations. And despite the medical nature of the coronavirus threat, only 2% of the 3,000 public spaces included in this study described themselves as being solely about health care and science issues. 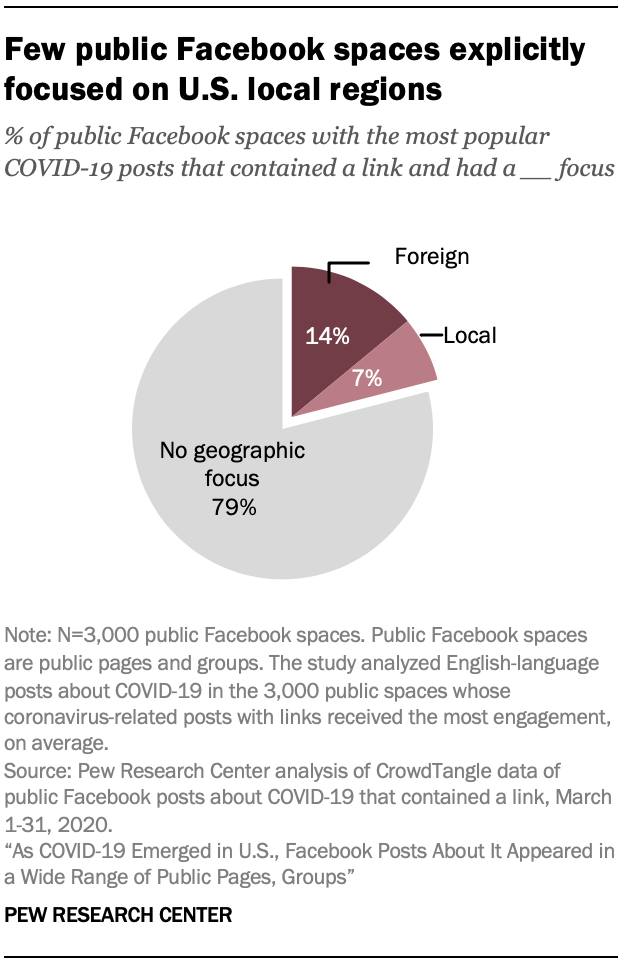 Relatively few of these public Facebook spaces had a clear geographic focus: 14% identified with another country or a foreign popular figure, while 7% identified with a specific city, state or other local area in the U.S. These local public spaces included those promoting local issues, like support or opposition to political leaders or parties (“Flip it Red California” or “Florida Democratic Party”) or support of local causes (“Texans for Public Education”). In some cases, public spaces were dedicated to a specific local agency, such as “Wisconsin State Parks” and “Duval County Public Schools.” Others celebrated the local area, such as “Cobb County Grown” or “You know you’re from Bowie, MD if you remember…” And some were ways for members to share local news and information, such as “What is going on in Riverside County?”

The presence of these pages and groups shows that Facebook users were at times turning to spaces dedicated to their local areas to discuss the pandemic’s impact. A recent Pew Research Center survey found that a majority of U.S. adults (61%) say they are giving about equal attention to both national and state/local coronavirus news, while about a quarter (23%) are paying closer attention to state and local news about the outbreak.

Next: 2. News organizations were most prominent source in COVID-19 content shared in public Facebook spaces Next Page → ← Prev Page