2. Americans who rely on Trump for COVID-19 news have the harshest views of media performance by far

Several questions in the April 20-26 survey seek the public’s view of the media’s performance in covering the COVID-19 pandemic – from a variety of perspectives. The questions range from assessments of the tone and accuracy of media coverage to the impact and role of journalists.

Broadly speaking, the overall responses to these questions reveal a public that, while still harboring some questions and doubts about the media’s coverage of the outbreak, tends to offer more favorable than unfavorable assessments. But when examining these responses by Americans’ most relied-upon sources for COVID-19 information, a crystal-clear pattern emerges.

On the whole, highly positive evaluations of the media’s coverage of COVID-19 consistently come from those Americans who rely most on national news outlets for information about the pandemic. At the opposite end of the spectrum are Americans who rely most on President Trump and his task force for that news, a group that consistently delivers harsh evaluations of the media.

News consumers who rely most on public health organizations and officials, state and local officials, or local news outlets for their information about the outbreak are situated between the national news group and the Trump group. But their responses – which are often similar across the three groups – tend to be closer to the views of those who rely on national news than of those who look to the White House. 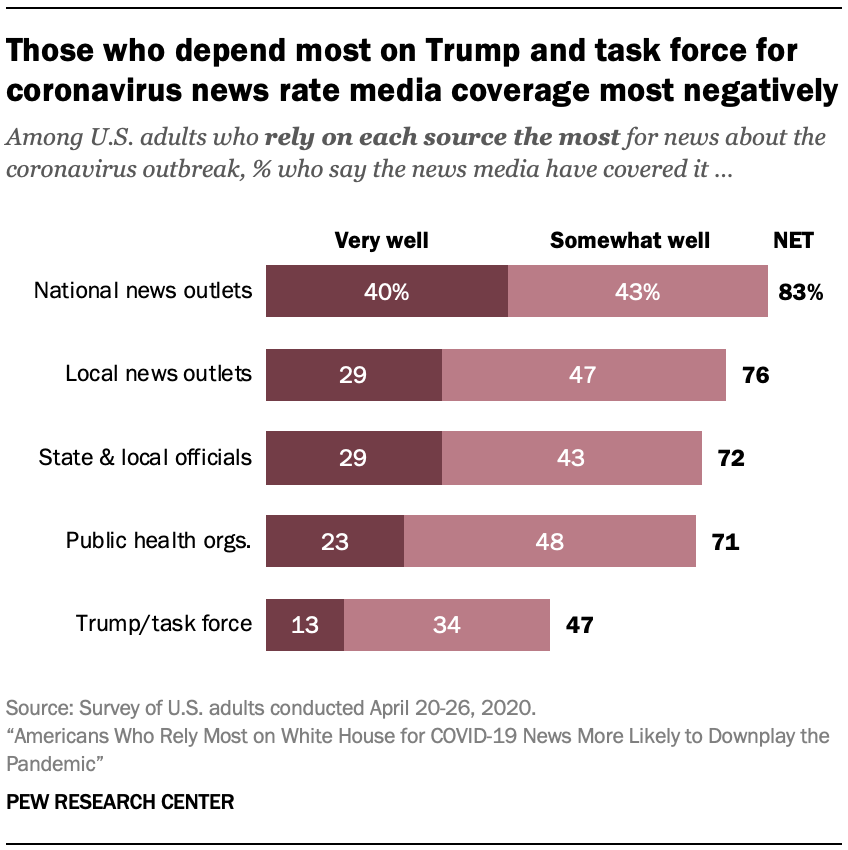 The survey finds that when asked about the overall quality of coverage, Americans are relatively positive. About seven-in-ten (69%) say journalists have done “very well” or “somewhat well” in covering the COVID-19 outbreak.

Those who rely most on national news outlets for news about the pandemic are most likely to say that journalists have done at least somewhat well, at 83%, followed in a tight cluster by those who most rely on local news outlets (76%), state and local officials (72%), and public health organizations and officials (71%) for COVID-19 news.

The national news group includes 40% who say the media have done very well, notably higher than the shares in any other group who say the same.

For those who rely most on Trump and his task force for news of the pandemic, that grade is much lower. Roughly half (47%) say the media have done at least somewhat well covering the crisis, including only 13% who say they have done very well. 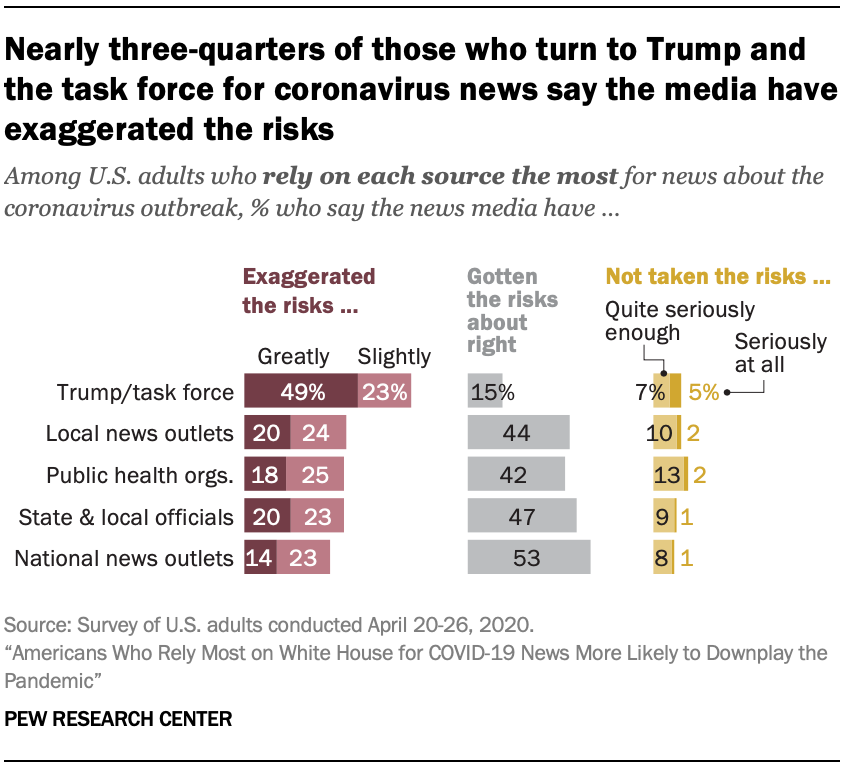 Overall, about half (48%) of all Americans say the media have either slightly or greatly exaggerated the risk associated with the COVID-19 pandemic, a number that has dropped notably from 62% in March.

Looking by media group, those who most rely on public health organizations, local news outlets and local elected officials for coronavirus news are about equally likely to say that the media have exaggerated the risks somewhat and that journalists have gotten it about right. For example, among those who rely most on public health organizations and officials, 43% say the media have exaggerated the risks and 42% say they’ve gotten it about right. Far fewer – 15% – say they have underplayed the risks.

In stark contrast, only 15% of U.S. adults who rely most on Trump and the task force for coronavirus news say the media have gotten the risks about right. Nearly three-quarters (72%) of them believe journalists have exaggerated the risks, including about half (49%) who say they have greatly exaggerated the risks of the virus. 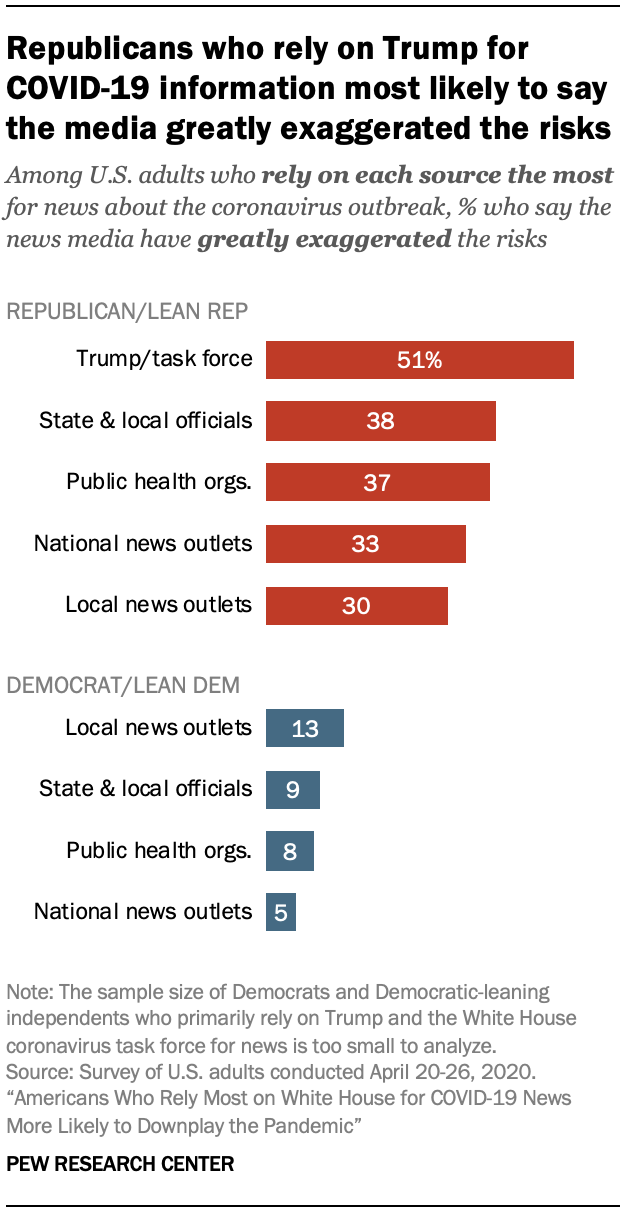 Some of the difference between groups here is connected to the fact that people who rely on Trump for COVID-19 information are far more likely to be Republicans – who in general are more likely than Democrats to say that the media have exaggerated the risks in their coverage of the coronavirus. But even among Republicans and Republican-leaning independents, there is a difference in attitudes toward the media coverage depending on which sources they rely on most for coronavirus news. Republicans who rely primarily on Trump and the task force are more likely to say that the media have greatly exaggerated the risks (51%) than Republicans who turn primarily to other sources. 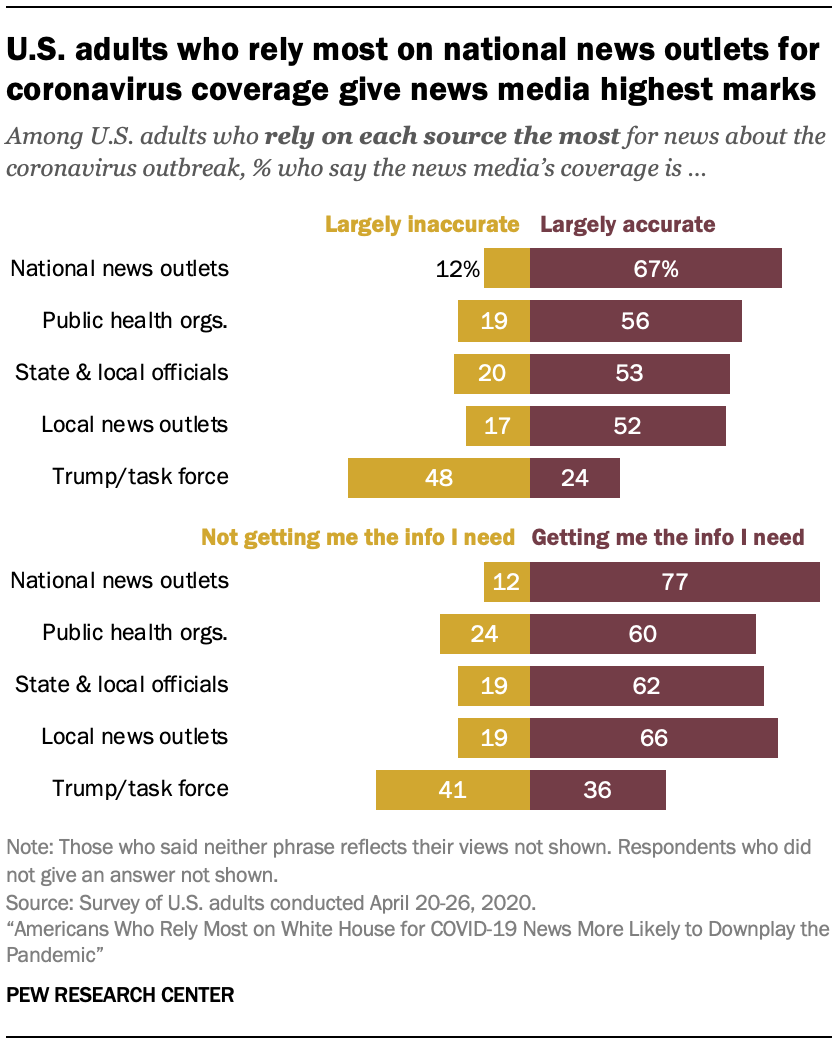 The survey also probed views of the quality of the media’s reporting on the COVID-19 pandemic in several other ways, including the question of how accurate that reporting is.

Overall, as reported in an earlier Pew Research Center analysis, Americans are about twice as likely to say that media coverage of the outbreak has been largely accurate (49%) than largely inaccurate (24%), while another 26% say neither option applies.

Four of the five media-consumption groups examined are far more likely to say that the coverage is accurate than inaccurate. More than half of those who rely mainly on public health organizations and officials for coronavirus news (56%) say the news media’s reporting has been largely accurate, compared with 19% who say it has been largely inaccurate. The numbers are similar for those who rely on state and local officials and those who look to local news outlets.

Assessments about the accuracy of the media’s reporting on the outbreak are even more positive among those who rely mostly on national news outlets, with those news consumers more than five times as likely to characterize coverage as accurate (67%) rather than inaccurate (12%). But those who rely on Trump and the task force see COVID-19 coverage as far more flawed than the other groups. They are twice as likely to say that coverage has been largely inaccurate (48%) as largely accurate (24%).

A related question asked whether the media’s coverage of the COVID-19 story is getting people the information they need. Again at the high end of the scale, about three-quarters of those who rely on national news outlets (77%) say they are getting the information they need from the media, compared with only 12% who say they are not. By contrast, those who rely on the president and his task force again give the media coverage lower ratings; among that group, 36% say the media’s coverage is providing the news they need, and 41% say it is not.

The other groups’ responses cluster between these two extremes, although somewhat closer to those in the national news cohort. About two-thirds (66%) of those who rely most on local news outlets say they get the information they need from the media, as do 62% of U.S. adults who rely mainly on state and local officials and 60% who rely on public health officials and organizations. Few in each group say the coverage is not getting them the information they need. 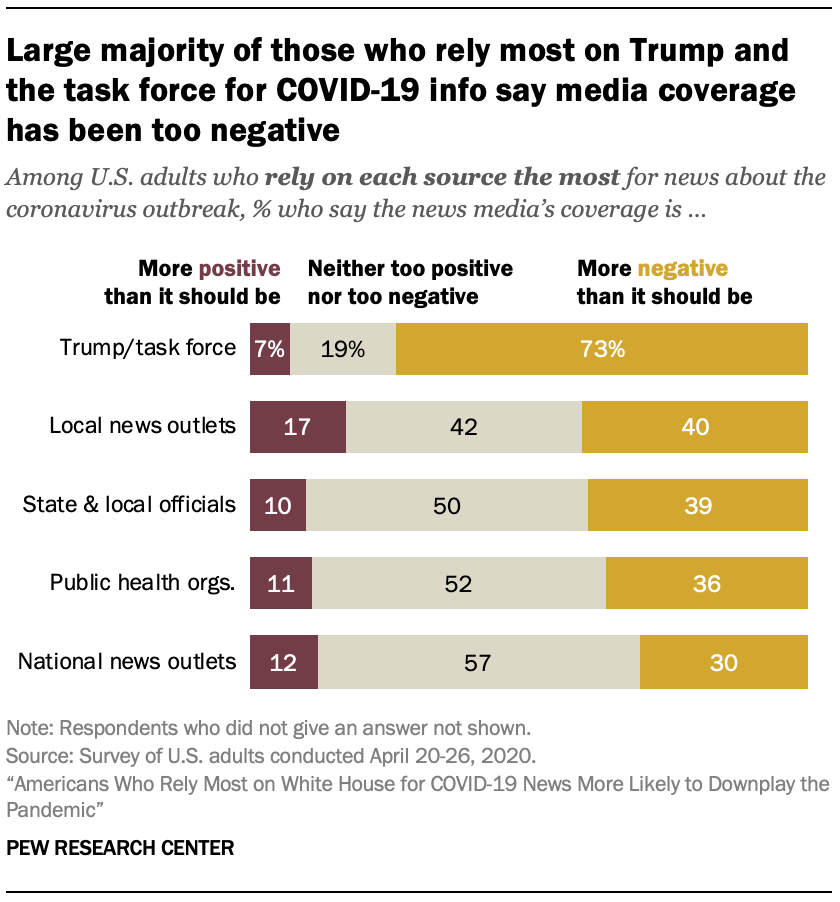 Another question focused on the tone of the media’s coronavirus coverage. The survey asked Americans if that coverage was more negative or more positive than it should be, or whether neither applies.

Among all Americans, there is little sentiment that coverage is more positive than it should be (12%); far more (43%) say it is unnecessarily negative. That is virtually the same percentage (44%) as those who say neither answer applies.

In this case, there is not much divergence across media-consumption groups about whether media coverage is unduly positive. But there are more significant differences on whether coverage is too negative. Those who rely most on national news outlets for pandemic news are among the least likely to say the coverage is too negative (30%) and among the most likely to say that the media’s coverage has been neither too positive nor too negative (57%). Meanwhile, nearly three-quarters of those who turn to the White House (73%) say coverage has been unduly negative – by far the highest share of any group. Fewer than half in the local news group (40%), the group that relies on state and local officials (39%) and the group that turns to public health officials (36%) agree with that criticism. 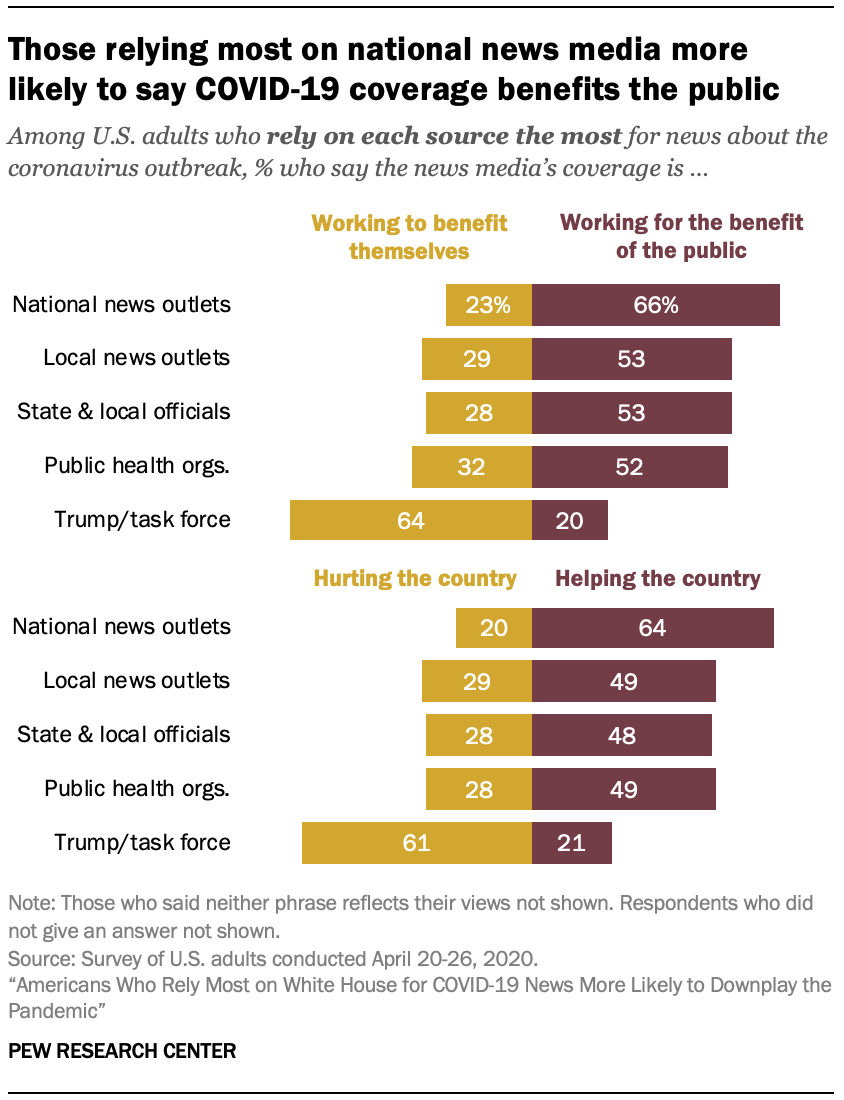 Two of the survey questions related to the media’s coverage of the COVID-19 crisis gauged Americans’ perceptions of journalists’ role and impact on society.

Those who rely most on national news outlets are again the most positive about the media – fully 66% of Americans in this group say journalists are working for the benefit of the public, as opposed to 23% who respond that they are working to benefit themselves. Americans who rely most on public health officials, local news outlets and state and local officials also are more likely to say journalists are working to benefit the public rather than themselves, albeit by smaller margins.

But the group that relies most on Trump and the task force again has, by far, the most negative view of the media. Almost two-thirds (64%) believe journalists are working for their own benefit, roughly three times the portion (20%) who say they are working to benefit the public.

Respondents also were asked to assess the media’s impact on the country at a time of national crisis, based on their coronavirus coverage. Given the choice between saying that the media are helping the country or hurting the country, 46% of all Americans say the coverage is helping, 34% say it is hurting and 20% say neither choice applies.

In this case, those who rely most on national news outlets were the most likely to say the media’s coverage is helping the country (64%), while one-in-five say they are hurting it.

The responses of those who rely most on the president and his task force for news of the pandemic are nearly the reverse: Among the Trump group, only 21% say the media are helping the country with their pandemic coverage, while almost three times as many (61%) believe they are damaging the nation.

There are virtually no differences on this question in the responses of those who rely most on public health organizations and officials, local news outlets, or state and local officials. Roughly half in each group say journalists’ coverage is helping the country, while about three-in-ten say it is doing more harm than good.

Has the pandemic been overblown or underplayed? 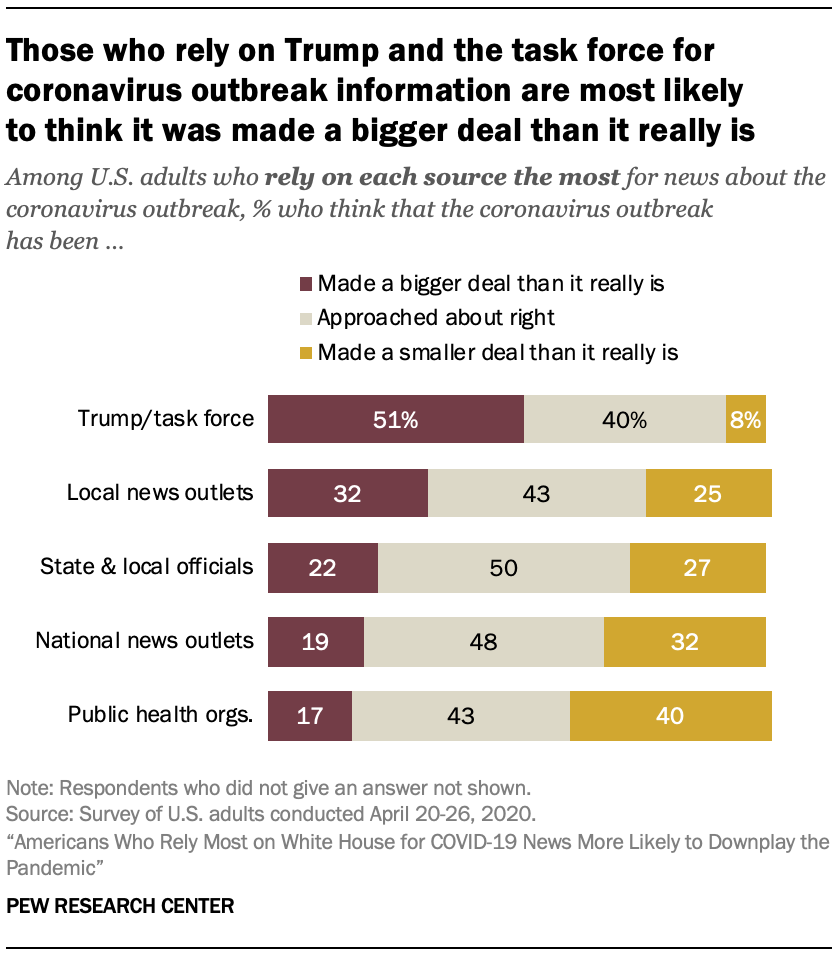 In an overarching question that asked whether the appropriate amount of emphasis has been placed on the outbreak, stark differences again emerge. For this question, which was phrased more broadly and not specifically framed around journalists or the media, those who rely most on Trump and his task force again stand out: About half (51%) say the outbreak generally has been made a bigger deal than it really is, while just 8% say it’s been underplayed.

At the other end of the spectrum are those who turn most to public health organizations and officials. Four-in-ten in this group say it has been made a smaller deal than it really is, while just 17% say it has been overblown.

The two groups most likely to say the appropriate level of attention has been placed on the pandemic are those who rely mainly on state and local officials for COVID-19 news (50%) and those who look mostly to national news outlets (48%).

Next: 3. Some claims about COVID-19 treatments reach certain news groups more than others Next Page → ← Prev Page