2. Americans are more negative in their broader views of journalists than they are toward COVID-19 coverage

Even as Americans are more likely to give the news media positive than negative marks on key aspects of COVID-19 reporting, views of journalists broadly remain more negative – specifically in Americans’ confidence in journalists and their views of their ethical standards. Furthermore, major partisan divides are just as stark as before the outbreak began, and Republicans and Democrats disagree more strongly in their assessments of the media than they do about several other institutions. 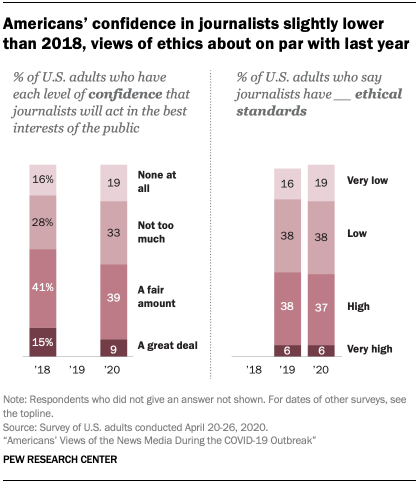 Partisans remain sharply divided in their opinions about journalists 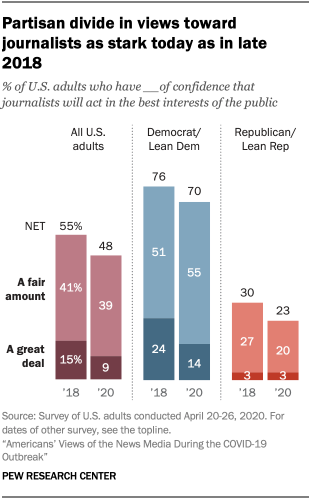 Like their views of the news media’s COVID-19 coverage, Republicans and Democrats sharply diverge in their confidence in journalists and views of journalists’ ethical standards – divides that are just as stark as before the outbreak.

While a majority of Democrats and Democratic leaning independents (70%) say they have at least a fair amount of confidence in journalists to serve the public interest, this share falls 47 percentage points to about a quarter (23%) of Republicans and Republican leaners. The size of this partisan divide is almost exactly the same as it was in late 2018, with slight overall decline in confidence occurring within both parties.

These gaps are even larger between the ideological ends of the parties. The 47-point gap between the shares of Republicans and Democrats who say they have at least a fair amount of confidence in journalists grows to 61 points between liberal Democrats (76%) and conservative Republicans (15%). And the 45-point partisan divide in views about journalists’ ethics swells to 57 points between liberal Democrats (70% of whom say journalists have at least high ethical standards) and conservative Republicans (13%). 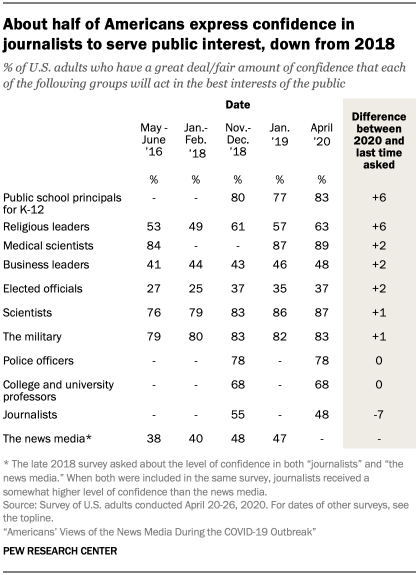 On a list of several different groups of individuals, journalists rank near the bottom when it comes to public confidence. And partisan divides in views toward journalists are larger than they are for these other groups.

Survey respondents were asked about their level of confidence in groups of people from 10 different areas to act in the public interest. Journalists are on par with business leaders (48%), and they rank higher than only one other group – elected officials, who have the confidence of just 37% of U.S. adults. In the new survey, medical scientists (89%), scientists in general (87%), public school principals for grades K-12 (83%) and the military (83%) rise to the top of the list.

Journalists are the only group for which public confidence has declined since the last time each question was asked. 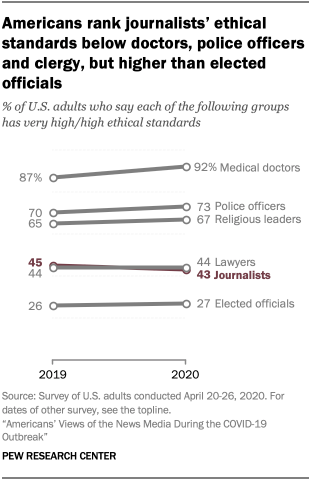 The public is more likely to think medical doctors (92%), police officers (73%) and religious leaders (67%) have very high or high ethical standards, while journalists (43%) are about on par with lawyers (44%).

Partisan divides in these views of journalists stand out for being especially large.

The 47-point gap between Democrats and Republicans (including leaners) in the share who express at least a fair amount of confidence in journalists to act in the public interest is at least 10 points larger than the split for each of the other nine groups of individuals, a pattern that is very similar to views in 2018 to before the COVID-19 outbreak. The next largest gap is 37 points: 85% of Democrats express confidence in college professors, compared with 48% of Republicans. 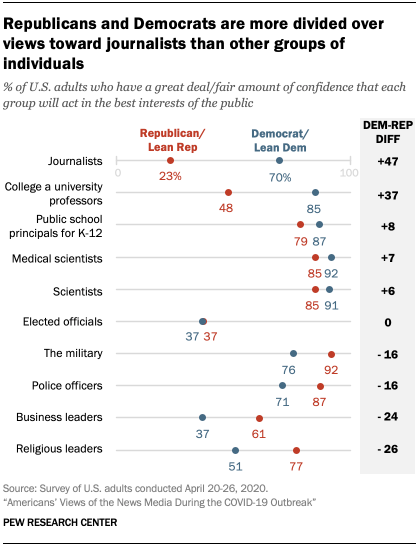 And the same pattern emerges in views of ethics. The 45-point gap in whether journalists have high or very ethical standards between Republicans and Democrats shadows the divides for the other five groups asked about. 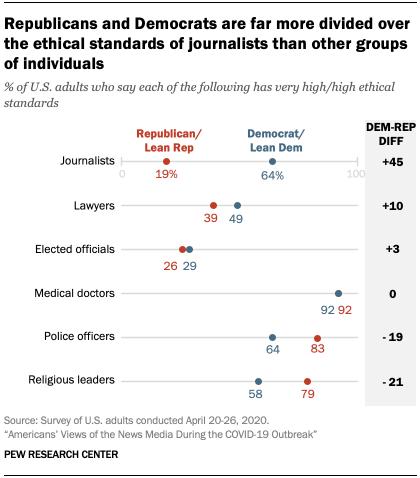