About half say they have seen at least some made-up news about the coronavirus; 29% think it was created in a lab 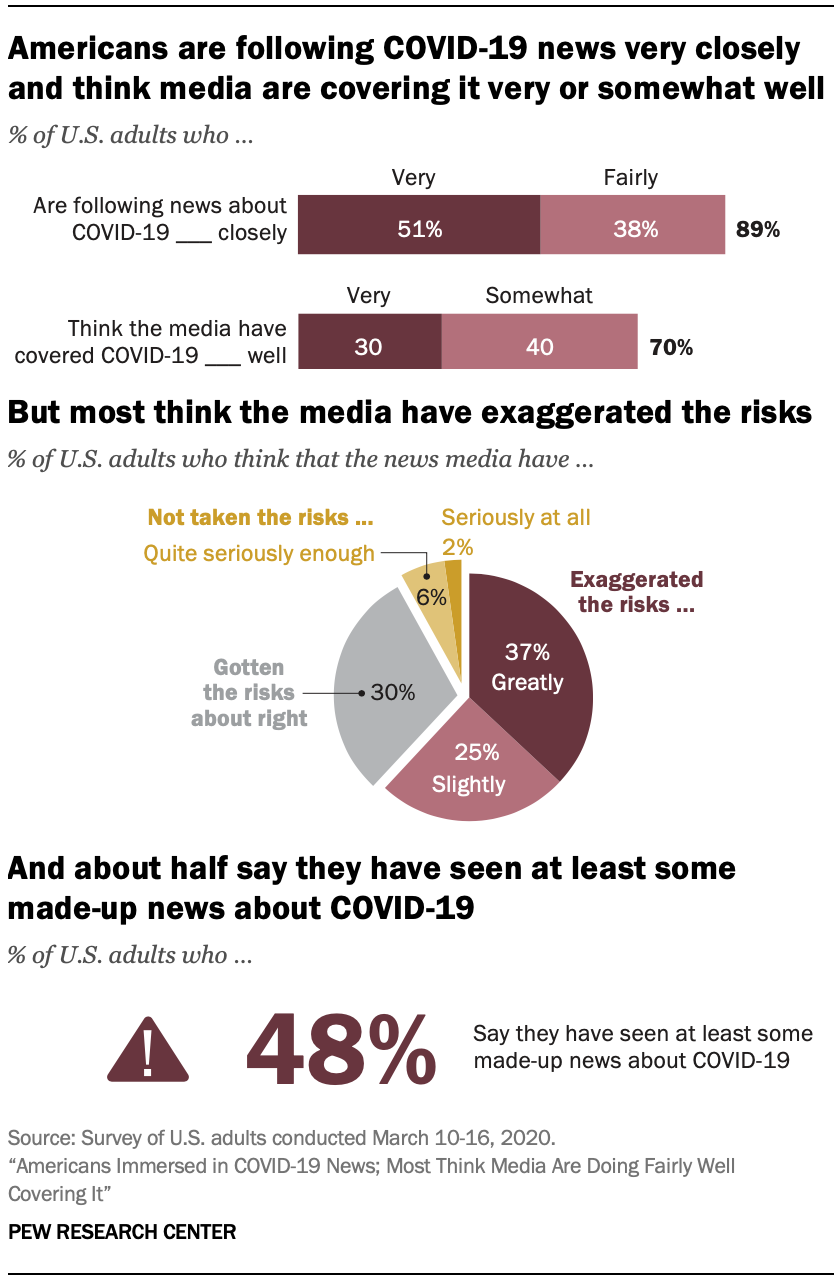 The COVID-19 pandemic has caught Americans’ rapt attention. Roughly half of U.S. adults (51%) are following news about it very closely, with another 38% following it fairly closely, according to a new Pew Research Center Election News Pathways survey conducted from March 10-16, 2020. During this period, the number of confirmed cases in the United States increased from about 650 to over 3,000, the World Health Organization declared the COVID-19 outbreak a pandemic, President Donald Trump announced a ban on travel to the U.S. from European countries and many universities announced closures or remote classes.

Americans give the news media fairly high marks for their coverage of COVID-19, though most think their reporting has at least somewhat exaggerated the risks.

Misinformation has also found its way into the information stream. About half the public (48%) say they’ve been exposed to at least some made-up news and information related to the virus. And when asked two questions about the virus, substantial portions express belief in claims that are in fact false. These findings come from a survey of 8,914 U.S. adults who are members of the Center’s American Trends Panel.

Partisanship comes through clearly in Americans’ assessment of the coverage and beliefs about the virus itself. Republicans and independents who lean Republican are more negative about the news media’s performance than Democrats and Democratic leaners. Republicans are also roughly twice as likely as Democrats to think COVID-19 was created intentionally in a lab and more likely to say that the timing around a possible vaccine is within months – views that are out of sync with most health experts.

Overall, the public gives the media fairly high marks when it comes to their coverage of the virus. Fully 70% say the news media are doing very (30%) or somewhat well (40%), while just about three-in-ten say they are doing not too well or not well at all (29%). Ratings get even higher when it comes to the specific sources people turn to most. 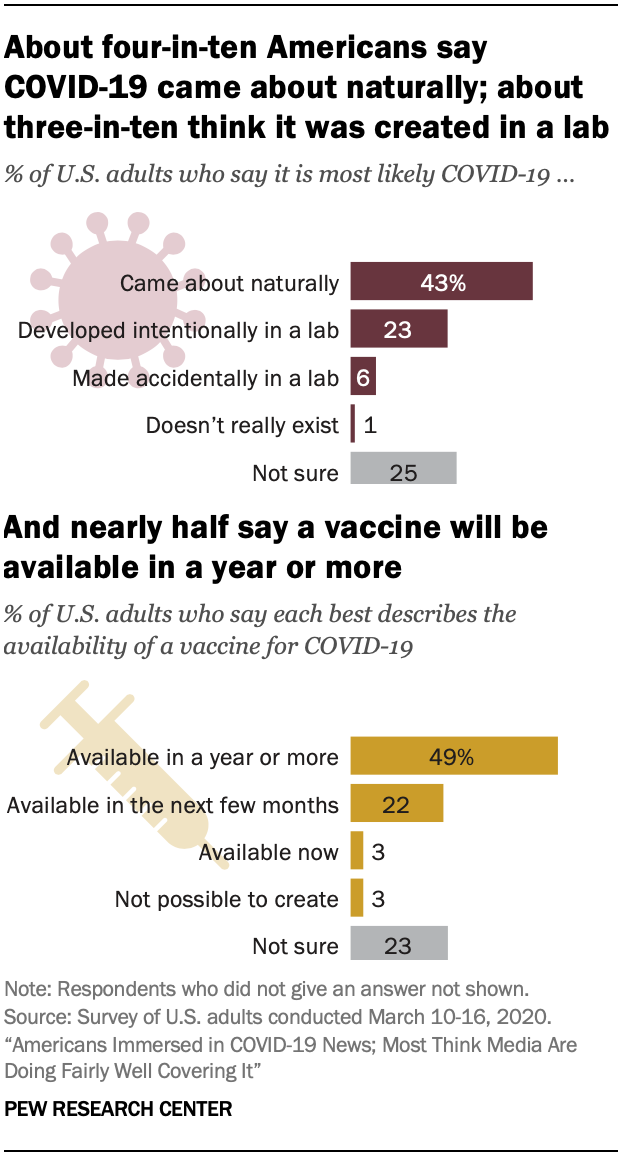 Even as Americans say they are getting consistent facts from their news sources, many are not immune from campaigns of made-up news related to COVID-19. About half of U.S. adults (48%) report having come across at least some news and information about the virus that seemed completely made up, with 12% saying they have seen a lot of it and 35% saying they have seen some. About a third (32%) have not seen much, while 20% say that’ve not seen any at all.

This mix of information seems to have led to some confusion about the outbreak. When asked about the origin of the current strain of the virus, roughly four-in-ten (43%) correctly answered that it most likely came about naturally. But about a quarter (23%) referenced a fringe theory that has appeared in news media and social media, and was amplified by Republican Sen. Tom Cotton of Arkansas: that it was developed intentionally in a lab. Another 6% selected the answer that it was made accidentally in a lab, 1% said the whole thing is made up, and a quarter said they were unsure.

People were also asked when they think a vaccine for COVID-19 could be available. Roughly half (49%) answered that it would be a year or more, in line with what most public health experts have stated. But about two-in-ten believe a vaccine could be available within a few months, reflecting claims made by others, including some from President Trump. Very few think it is already available (3%) or that it would never be possible to create one (3%). About a quarter (23%) say they are not sure. 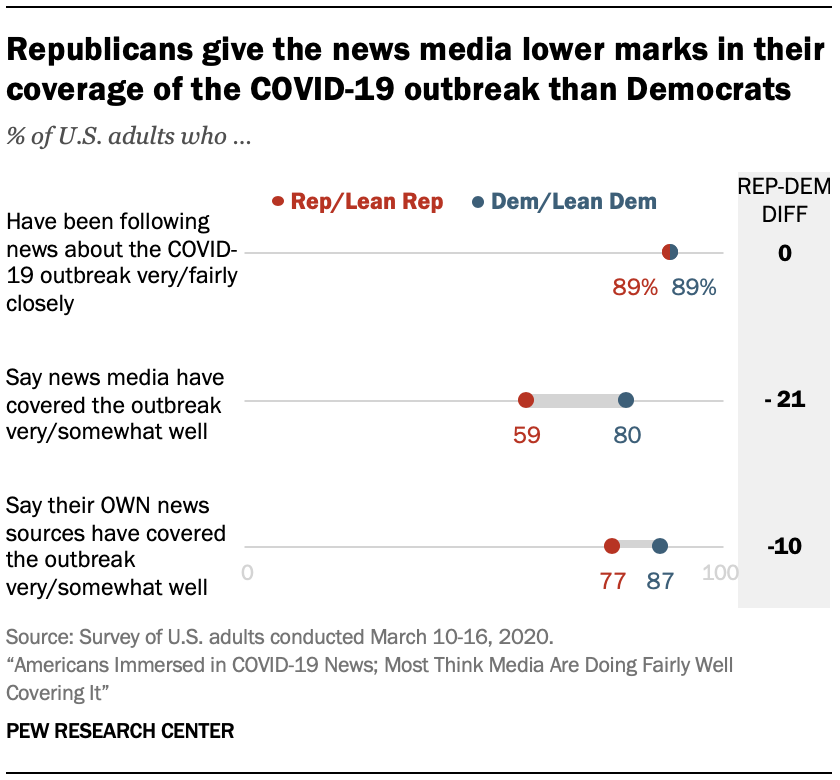 What’s more, a vast majority of Republicans (76%) say the news media have exaggerated the risks associated with the virus – 53% greatly and 24% slightly – while far fewer (17%) say the media have gotten it about right. Democrats, on the other hand, are much more likely than Republicans to think the news media have gotten the level of risk about right (41%). Still, Democrats are most likely to say the risks have been exaggerated (22% greatly, 27% slightly). 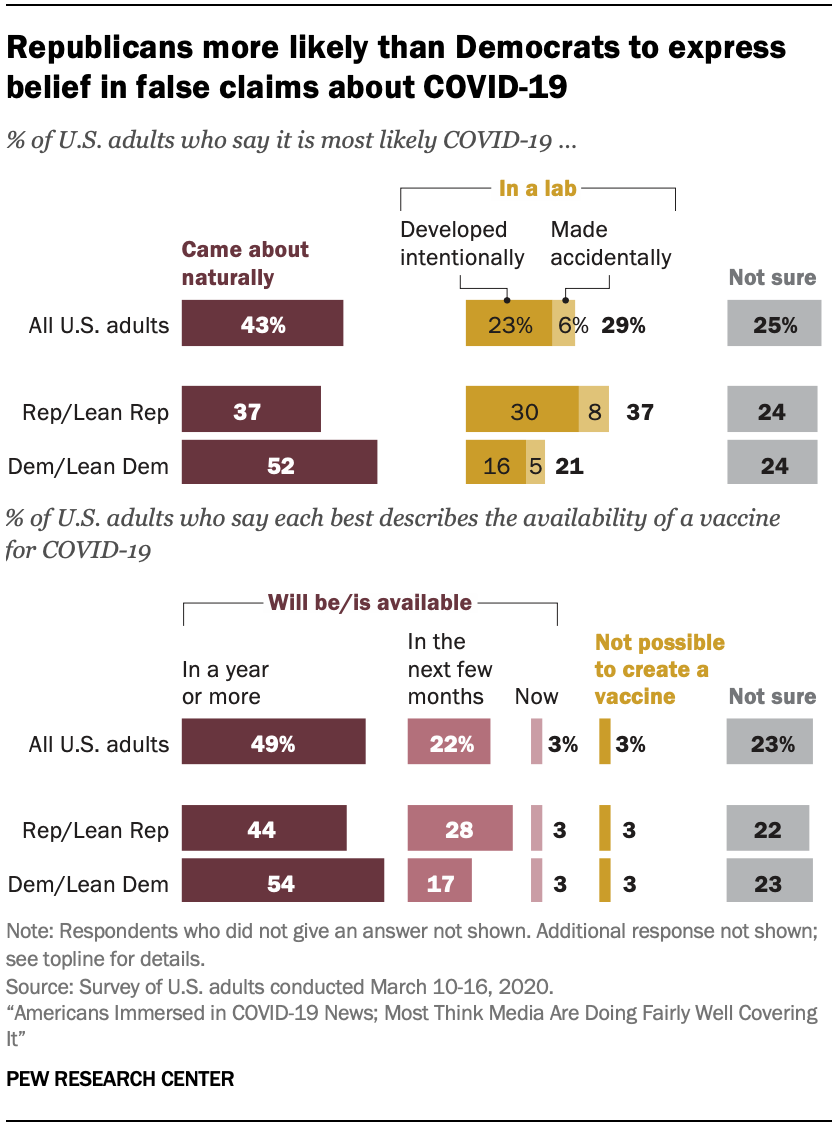 Republicans are more likely than Democrats to say they’ve seen made-up news related to the virus, but larger differences emerge in responses to two questions about COVID-19. On the origin of the virus, about half of Democrats (52%) correctly indicate that it most likely came about naturally, compared with 37% of Republicans. Republicans, on the other hand, are about twice as likely as Democrats to say it was developed intentionally in a lab (30% vs. 16%). About a quarter of both groups say they aren’t sure. And when asked about the possibility for a vaccine, the largest portion of both political groups echo the views of public health experts by answering that it would not be available for at least a year (44% of Republicans and Republican leaners and 54% of Democrats and Democratic leaners). But Republicans are more likely than Democrats to say a vaccine will be ready in the next few months: 28% compared with 17%.

One difference that stands out within party is based on the media diet, particularly on the right. Among 30 news outlets asked about in an earlier survey, Republicans who got political news only from outlets whose audiences lean right politically are more likely than Republicans with other media diets to think the news media have greatly exaggerated the risks associated with the virus and to think COVID-19 was created intentionally in a lab. (Details on the 30 news outlets and the audience compositions can be found here.) Some differences also emerge within Democrats based on media diet. Those who don’t get news from any outlets with left-leaning audiences in some cases stand part from Democrats with other media diets, including thinking the virus was created intentionally by humans.

Additional analysis of this data, including more demographics and political measures can be explored in the Election News Pathways data tool.

Next: 1. Majorities think the news media have done a good job overall covering COVID-19 but have exaggerated the risks Next Page → ← Prev Page