In the fateful four days from the South Carolina primary through Super Tuesday that transformed the battle for the Democratic presidential nomination, one recurring media narrative was – and continues to be today – the strong support for Joe Biden among black voters, support some analysts credit with saving the former vice president’s candidacy.

Black voters constitute a core element of the Democratic Party (for example, in 2017, non-Hispanic black adults composed 19% of Democratic registered voters). A new survey conducted Feb. 18 to March 2, 2020, as part of Pew Research Center’s Election News Pathways project finds that there are some notable differences between white and black Democrats in both news consumption habits and assessments of recent political events and figures in the news, according to the survey of 10,300 U.S. adults who are members of the Center’s American Trends Panel.

In addition to differences in where and how closely they follow election news, black and white Democrats have somewhat differing views about key events and candidates in the 2020 campaign.

This analysis focuses on differences between black and white Democrats. To find out more about Hispanic Democrats, use our interactive data tool or read upcoming analyses from the Center.

An earlier report from the Center’s Pathways project revealed that about 20% of Democrats and Democratic-leaning independents and of Republicans and Republican leaners are in a media bubble – getting political news in a given week only from outlets (among 30 outlets asked about) predominantly used by people who align with them politically and ideologically. But differences emerge by race. Only 12% of black Democrats are in a media bubble of sources with left-leaning audiences, compared with about twice as many white Democrats (23%). 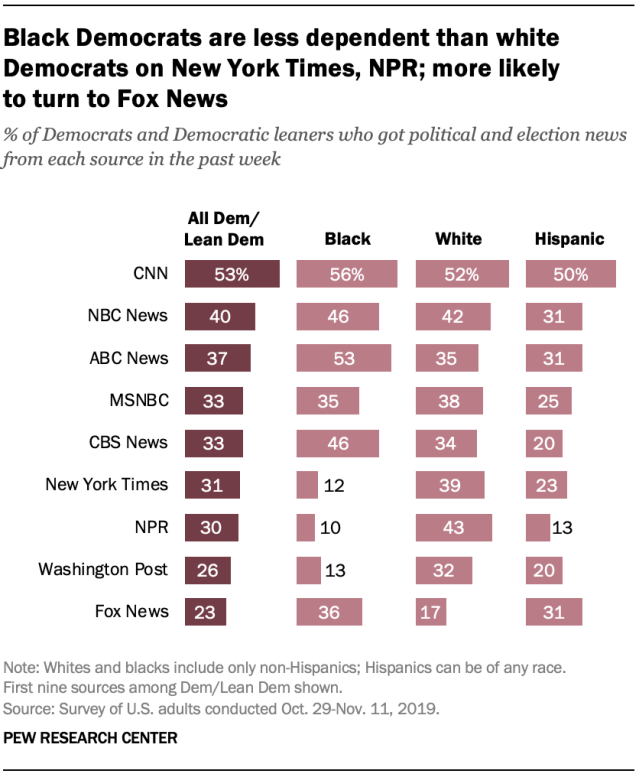 Along with following news about the 2020 candidates less closely, black Democrats and Democratic leaners also express somewhat less confidence than white Democrats that they understand what’s been happening in the Democratic primaries to date. That primary process, leading up to the time of the survey, included about a dozen candidates, crowded debate stages, two billionaire candidates flooding the airwaves with ads and an Iowa caucus marred by delayed and even disputed results.

Those lower levels of certainty among black Democrats around the facts and events of the primaries may be related to perceptions about whether the delay in releasing the Feb. 3 Iowa Democratic caucus results was completely unintentional or at least partly intentional. 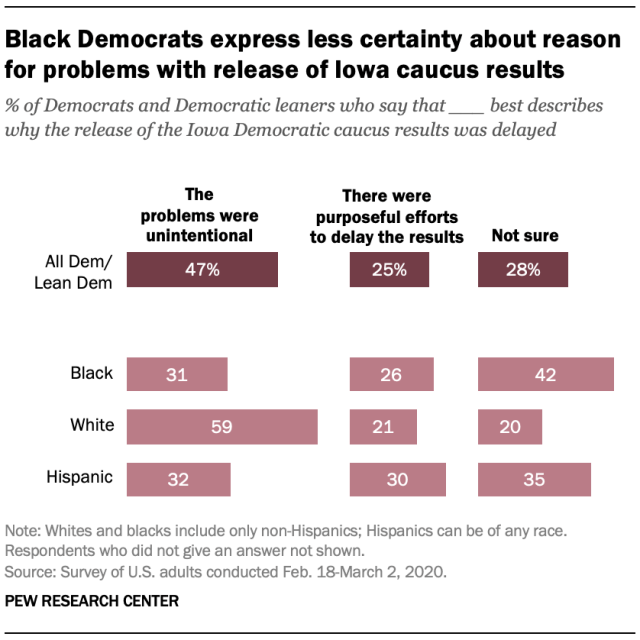 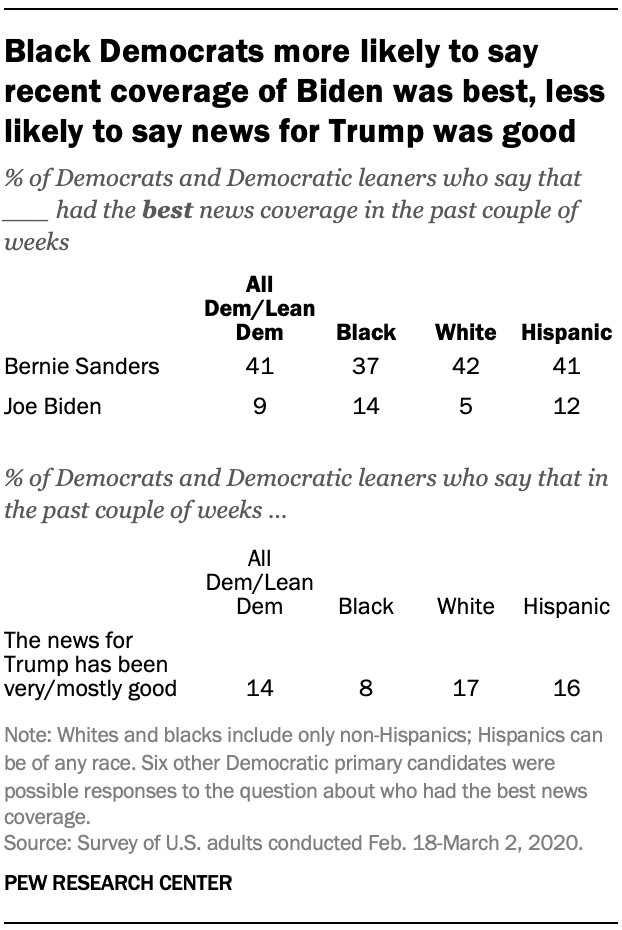 For much of the latter half of February and first two days of March, when the survey was administered, Bernie Sanders was considered a front-runner for the Democratic nomination in the media narrative. (That narrative did start to shift after the results of the Feb. 29 South Carolina primary in which support among black Democrats helped drive Biden to a big victory – the tail end of the survey field time.)

And when it comes to assessing the news about Trump in the past couple of weeks, majorities of all Democrats described it as very or mostly bad, including about six-in-ten black and white Democrats (61% and 59%, respectively). But black members of this group expressed less willingness to put Trump’s coverage in a favorable light. About one-in-ten black Democrats characterized news about Trump as mostly or very good (8%) in that period, compared with 17% of white Democrats.

These measures and more can be explored further in the Election News Pathways data tool, where all of the data associated with this project is available for public use.

Data from this analysis comes from surveys conducted Oct. 29 to Nov. 11, 2019, and Feb. 18 to March 2, 2020. See the survey questions and methodology for this analysis, or access the dataset.