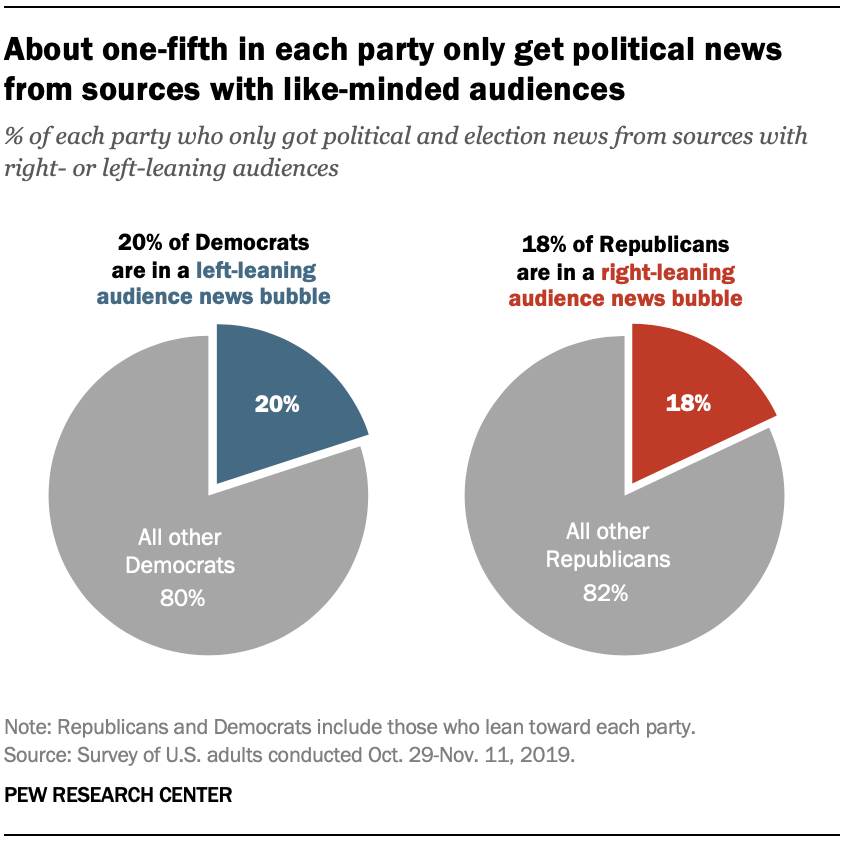 While Pew Research Center’s recent report on media polarization and the 2020 election found that many Democrats and Republicans differ from each other in their sources of news, about one-fifth of those in each party are in a more isolated kind of media bubble – getting political news in a given week only from outlets predominantly used by people who align with them politically, according to data from the Center’s Election News Pathways project. Respondents were asked if they got political and election news in the past week from 30 different sources representing a range of news media across different platforms. Based on this data, researchers calculated the political composition of each source’s audience. (See here for details about the ideological composition of news outlets’ audiences.)

In total, 20% of all Democrats and independents who lean Democratic get political news only from outlets with left-leaning audiences. Similarly, 18% of all Republicans and independents who lean Republican get their political news only from outlets with right-leaning audiences, according to the survey of 12,043 U.S. adults who are members of the Center’s American Trends Panel, conducted Oct. 29 to Nov. 11, 2019.

As noted in previous Pathways analyses, partisans in these two categories frequently have very different levels of awareness and perceptions of political events in the news.

Individuals in these two groups are naturally on different sides of the political aisle, but in many cases, they diverge even from other members of their own party. For example, Republicans who get news only from outlets with right-leaning audiences tend to be more conservative, embrace Donald Trump more warmly and rely on Fox News more extensively than Republicans in general.

Of the 30 media outlets studied, 17 were found to have left-leaning audiences, ranging from MSNBC and CNN to Politico and PBS. There are just six sources with right-leaning audiences, including Fox News, Breitbart and Rush Limbaugh’s radio talk show.

From feelings about Trump to reliance on a single main source of political news, big differences by media diet 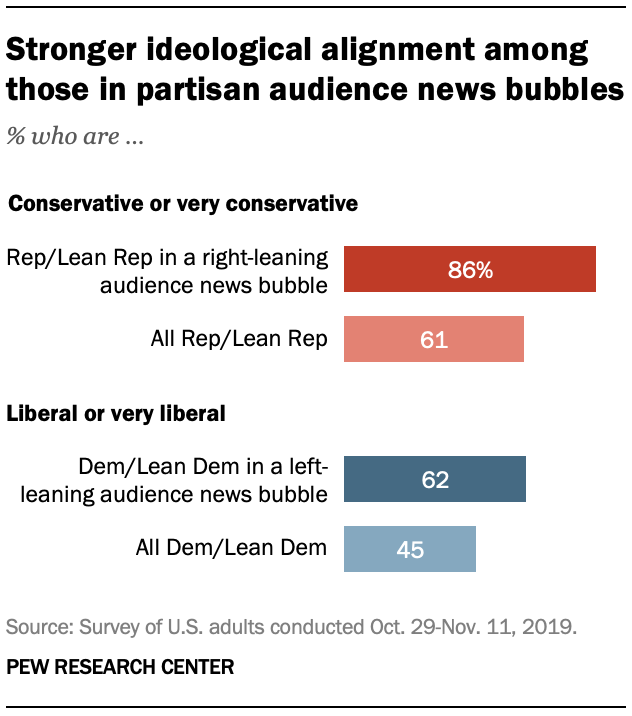 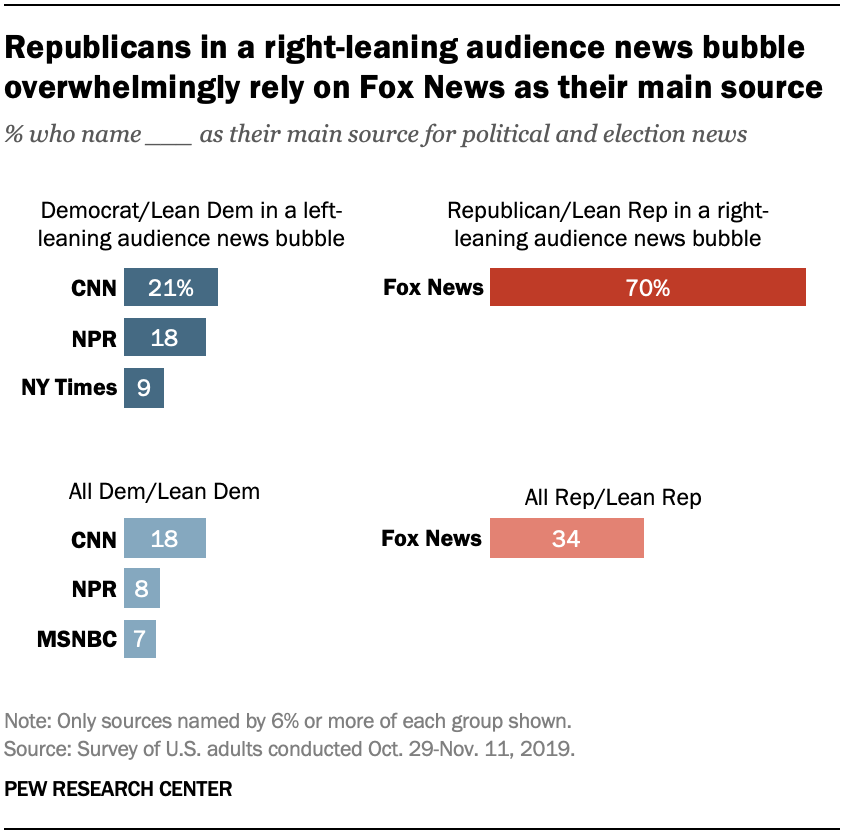 Among people in these groups, there is also a stronger orientation toward certain main sources for political and election news. Republicans in a right-leaning audience news bubble overwhelmingly name Fox News (70%) as their main source for political news. Meanwhile, the most commonly named main sources for Democrats in a left-leaning audience news bubble are CNN at 21% and NPR at 18%. Among all Republicans, the portion who cite Fox as their main source of political news drops to 34%. Among all Democrats, the portion citing CNN is roughly the same, while NPR as a main source falls to 8%.

Those in the opposite news bubbles have, not surprisingly, nearly opposite feelings toward Donald Trump. Fully 83% of Republicans in a right-leaning audience news bubble have very warm feelings toward the president (meaning they rate him between 76 and 100 on a zero to 100 “feeling thermometer,” where zero means they feel as cold as possible toward him and 100 means they feel as warm as possible). Among Democrats in the left-leaning audience news bubble, 90% say they have very cold feelings about him (ratings between zero and 24). Among all Democrats, the “very cold” number drops modestly to 81%, but among all Republicans, the “very warm” number falls to 53%. (Visit our Pathways data tool to see the full data on feelings toward Donald Trump.) 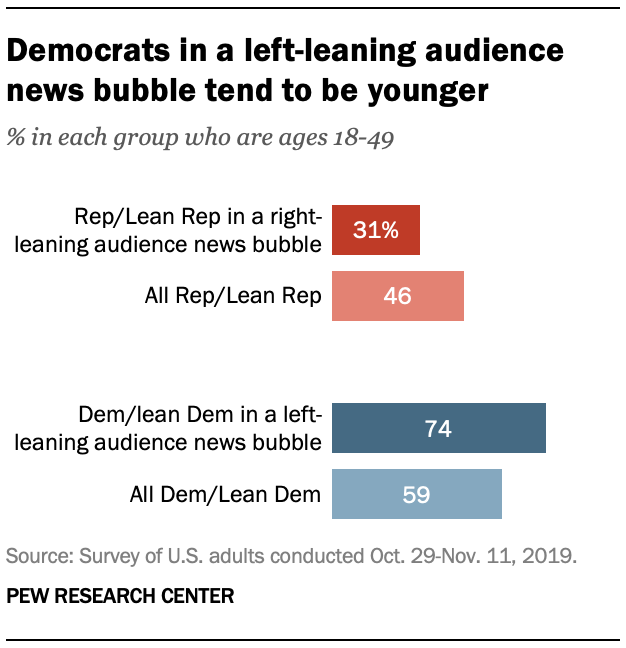 Clear age and education differences also emerge between the two groups in ways that create greater gaps than in the parties overall. 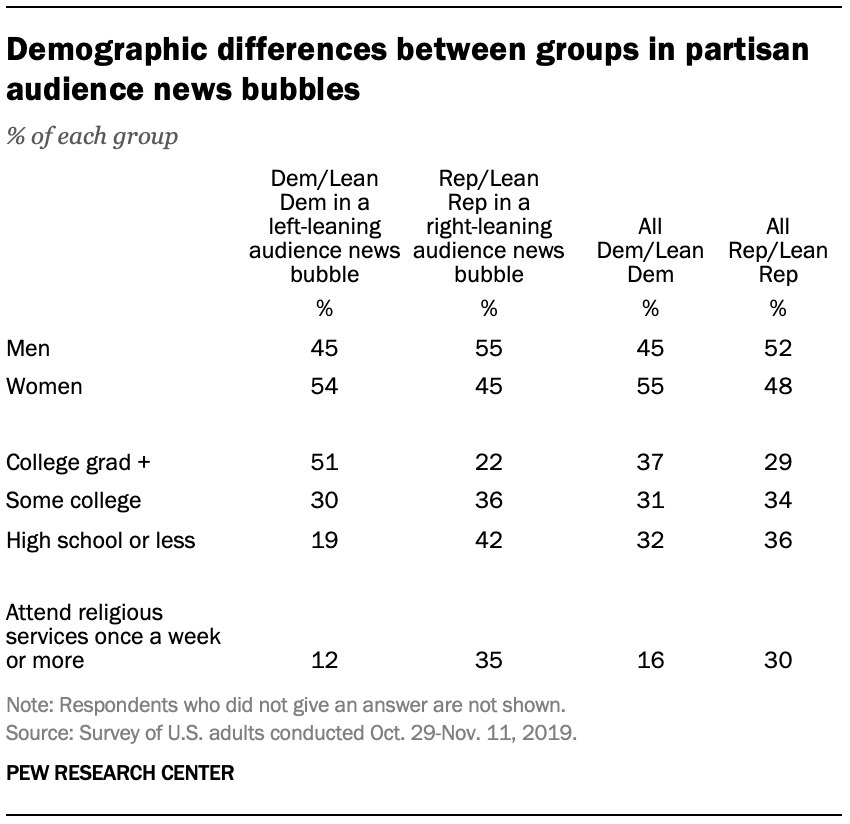 Finally, there is a modest gender gap between Democrats and Republicans who only get political news from sources with like-minded audiences. Among Republicans who get news only from outlets with right-leaning audiences, men outnumber women 55% to 45%, while women outnumber men 54% to 45% among Democrats who get news only from outlets with left-leaning audiences. Those numbers are very much in keeping with the overall gender split among all Republicans (52% male, 48% female) and Democrats (45% male, 55% female.)

These measures and more can be explored further in the Election News Pathways data tool, where all of the data associated with this project is available for public use.

See the survey questions and methodology for this analysis, or access the dataset.