1. Within both parties, approval of Trump is closely linked to trust in the news media

Through an exploration of more than 50 different surveys and an analysis of well over 100 questions, Pew Research Center finds that Americans’ political party identification is overwhelmingly linked to how the public evaluates the news media. Overall, Republicans give the news media far lower ratings than Democrats. These findings are in line with previous studies which show stark partisan divides, particularly after the 2016 presidential election. 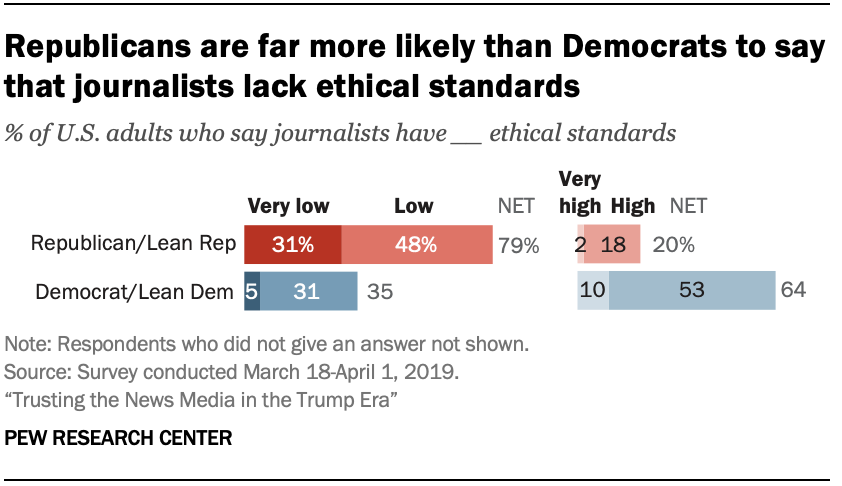 Similarly, Republicans are far more cynical about journalists’ ability to act in the best interests of the public. Three-in-ten have a great deal or fair amount of confidence that journalists do this, compared with about three-quarters of Democrats (76%) – a 46-point gap. Republicans and Republican leaners also express less support for the media’s “watchdog” role. They are 32 points less likely than Democrats and Democratic leaners to say media criticism of political leaders keeps them from doing things they shouldn’t do (50% vs. 82%, respectively). There is a 25-point gap in the share of Republicans and Democrats who say that news organizations treat all sides fairly when covering social and political issues (12% vs. 37%).

And Republicans are 22 percentage points less likely than Democrats (64% vs. 86%) to say they have a lot of or some trust in the information they get from national news organizations, though majorities of both parties say this. That said, minorities of both parties have a lot of trust in the information from national news organizations, though again Republicans are less likely to say this (12% vs. 30%). 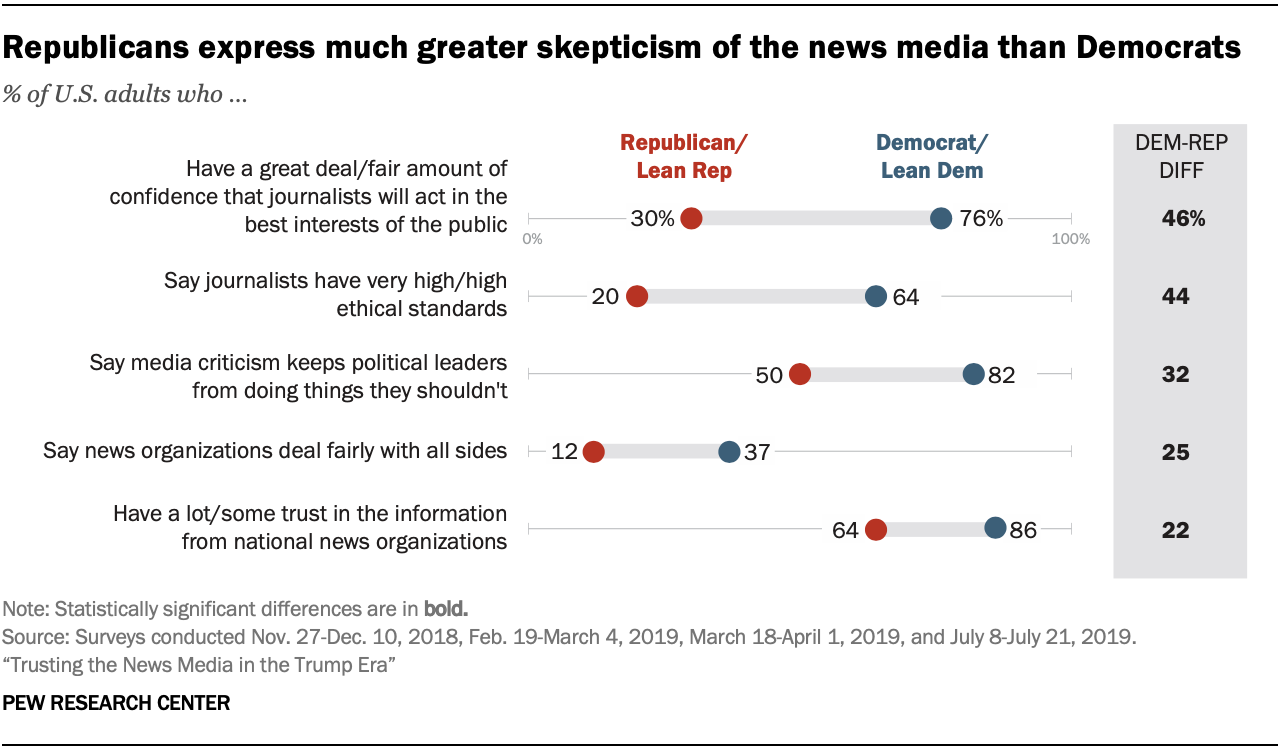 But there are differences within each party as well. Particularly among Republicans, approval of Donald Trump aligns with much greater animosity toward news organizations and journalists. Overall, about two-thirds of Republicans and Republican leaners (64%) strongly approve of how Trump is handling his job as president, according to a survey conducted between April 29-May 13, 2019. The remaining Republicans are almost evenly split between somewhat approving of Trump (18%) or disapproving (either strongly or somewhat – 17%). Nearly all Democrats fall in the disapproving camp, with 81% who strongly disapprove. 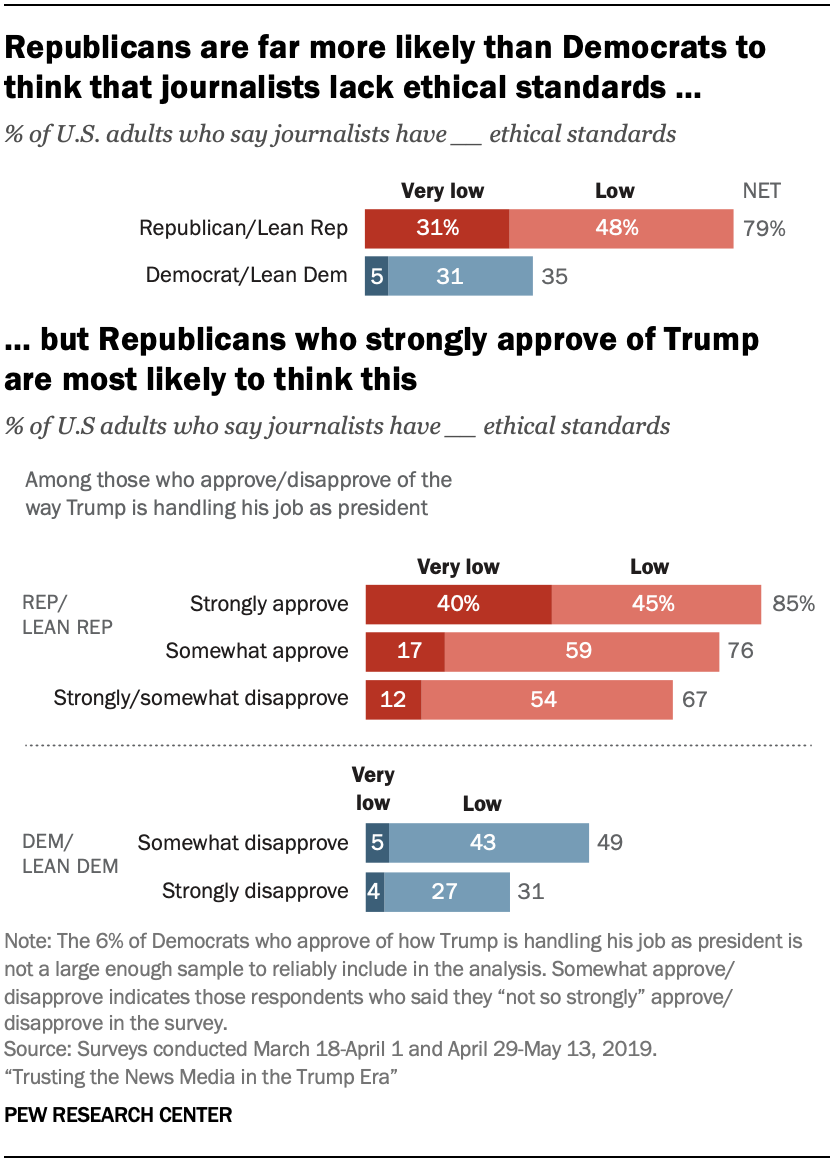 Republicans who strongly approve of the job Trump is doing are far more pessimistic in their evaluations of the news media than other Republicans. And Democrats who are most disapproving of Trump’s job performance are often more supportive of the news media than Democrats who disapprove less strongly. These within-party divides persist even when accounting for the respondents’ age, education and whether they identify as conservative, moderate or liberal.2 Taken together, the most approving Republicans and the least approving Democrats are further divided than the parties are as a whole.3

This point comes through clearly in views of journalists’ ethics. Trump’s strongest approvers outpace other Republicans – and Democrats – in their negative evaluation. As noted above, Republicans overall are 44 percentage points more likely to say journalists have very low or low ethical standards. And there is a 26-point difference for just very low (31% vs. 5%).

There is a divide within the Democratic Party as well, though not as stark. While very few Democrats think journalists have very low ethical standards, Democrats who strongly disapprove of Trump are less likely to say these standards are low or very low than somewhat disapproving Democrats (31% vs. 49%). 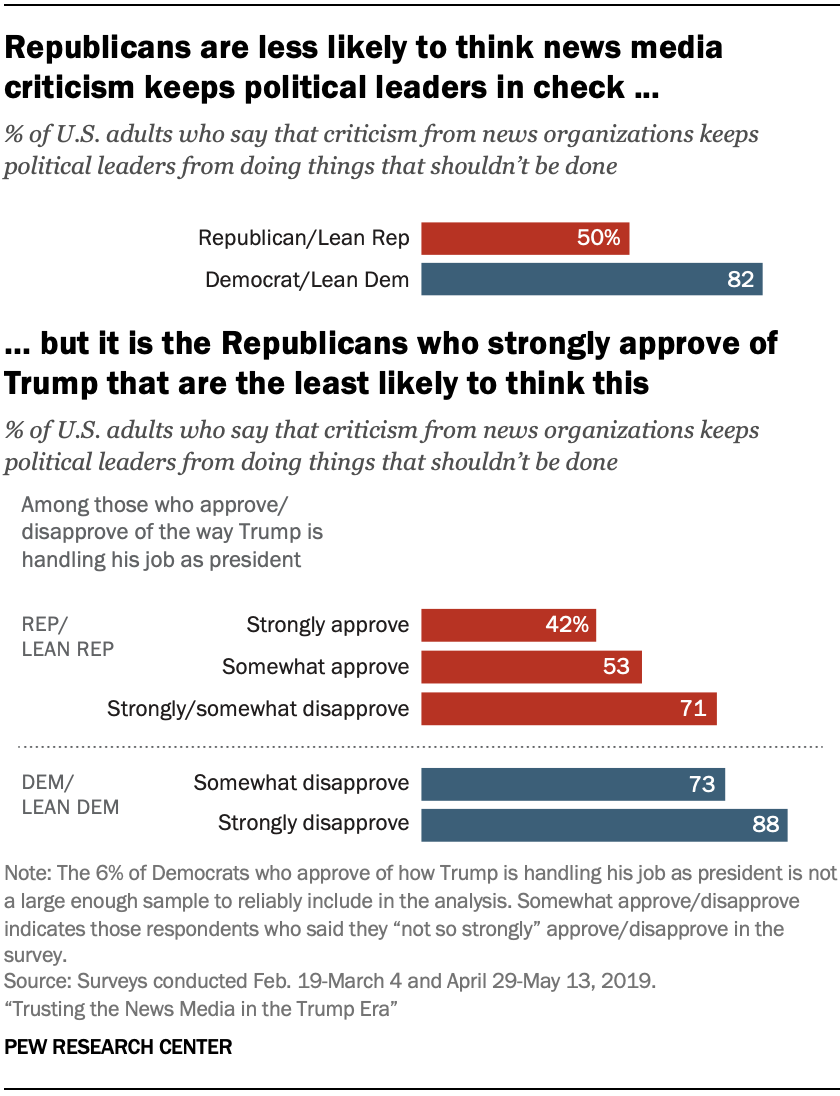 But just as with media ethics, differences within the parties emerge based on approval of Trump. There is a 29 percentage point split between the most approving Republicans (42%) and Republicans who disapprove of Trump (71%) in their views of the watchdog role, with those who somewhat approve falling in between (53%). And among Democrats, those who strongly disapprove of Trump are 15 points more likely to think news media criticism keeps political leaders in check than those who somewhat disapprove (88% vs. 73%). 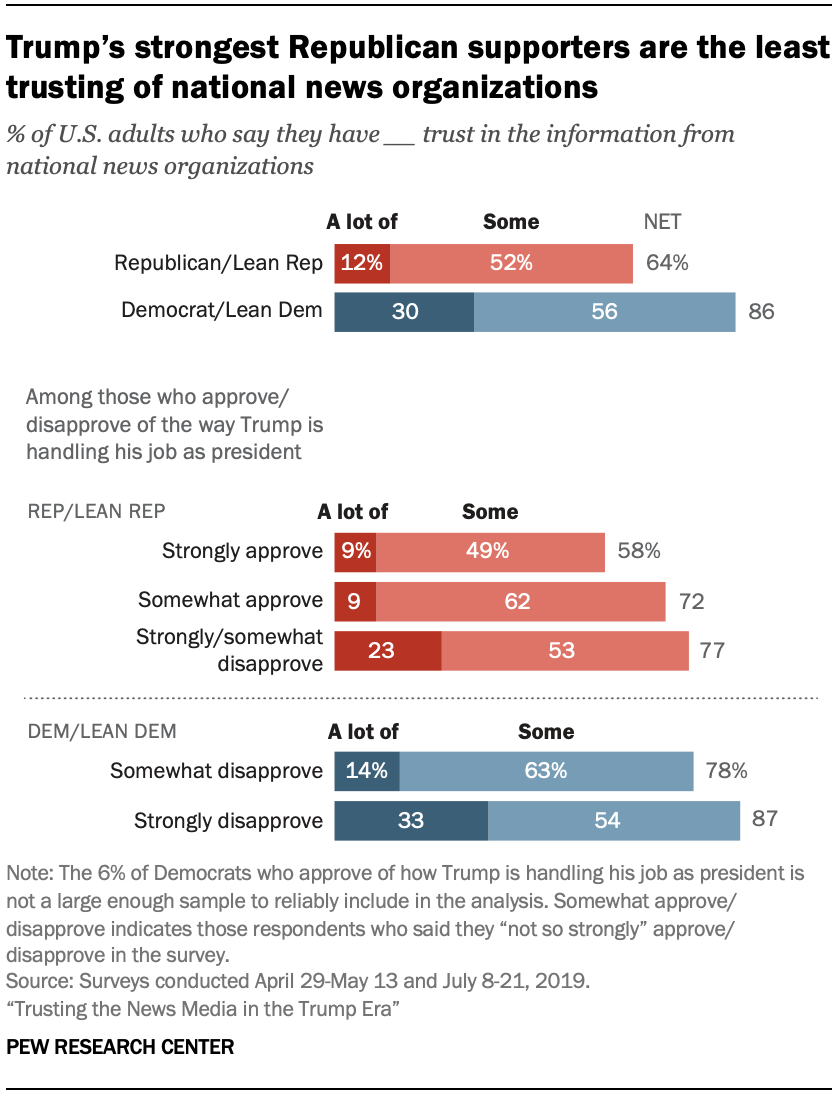 Trump’s strongest Republican approvers again stand out as the most skeptical when it comes to trust of national news organizations – the broadest and most direct measure of media trust in this study. About six-in-ten Republicans who strongly approve of Trump (58%) have at least some trust in national news organizations, 14 percentage points less than Republicans who somewhat approve (72%) and 19 points less than those who disapprove (77%). Overall, there is a 29-point difference between the strongly approving Republicans and the strongly disapproving Democrats (58% vs. 87%).

On one final measure of media trust – perceived fairness in coverage – Republicans are 25 percentage points less likely than Democrats to say news organizations treat all sides fairly when covering social and political issues (12% vs. 37%, respectively). However, within each party differences are less consistent.4 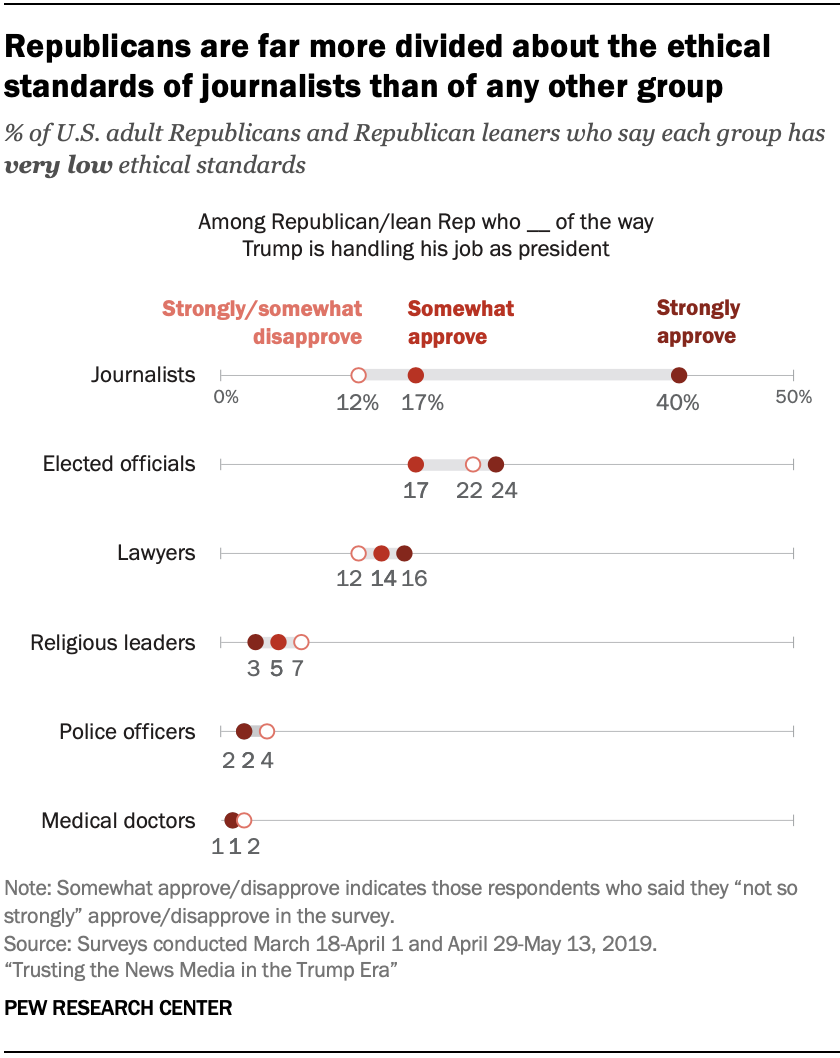 Approval of Trump seems to be more strongly tied to how the public evaluates the news media than to evaluations of other institutions, particularly among Republicans. The question about ethical standards was also asked about other groups of individuals – from elected officials to religious leaders to doctors – but the only area where substantial differences emerge based on Trump approval is journalists. Among Republicans of differing approval levels, the divide for any of the other groups asked about does not exceed 7 percentage points.

As noted earlier, very few Democrats think journalists have very low ethical standards. When combining those who said low or very low, though, the gaps between the strongly and somewhat disapproving Democrats similarly are greater for the ethical standards of journalists than they are for the other groups of individuals.

Next: 2. Highly engaged partisans have starkly different views of the news media Next Page → ← Prev Page