It is no secret that, in an information environment characterized by deep tensions between President Donald Trump and national news organizations, Americans are divided in their trust of the news media. A new Pew Research Center exploration of more than 50 different surveys conducted by the Center – combined with an analysis of well over 100 questions measuring possible factors that could drive trust in the news media – confirms that in the Trump era nothing comes close to matching the impact of political party identification. On item after item, Republicans consistently express far greater skepticism of the news media and their motives than Democrats, according to this analysis that focuses on trust in the news media during 2018 and 2019. 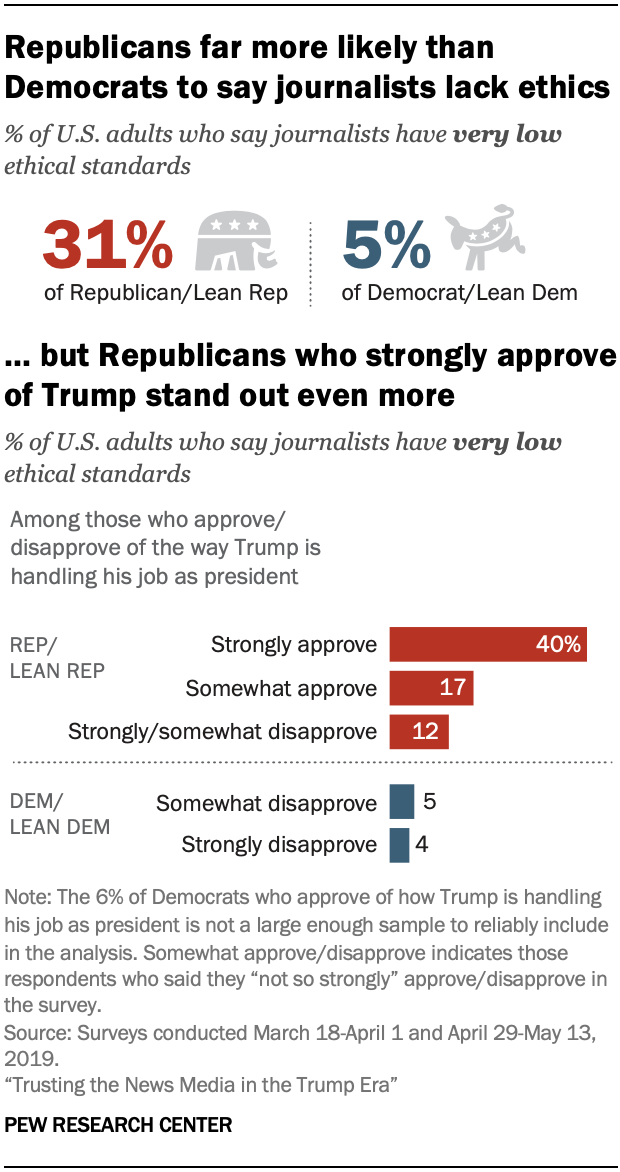 Even more telling, the analysis reveals that divides emerge within party – particularly the Republican Party – based on how strongly people approve of Trump’s performance as president. Trump has publicly and repeatedly criticized both news organizations and the journalists who work for them, criticisms that, according to this study, resonate with his most fervent supporters.

The link between the public’s approval of Trump and views of the news media is clear in evaluations of journalists’ ethics. About three-in-ten Republicans and Republican-leaning independents (31%) say journalists have very low ethical standards, roughly six times the 5% of Democrats and Democratic leaners who say this. Trump’s strongest approvers, though, express even greater suspicion: 40% of Republicans who strongly approve of Trump’s job performance say journalists’ ethics are that low. That is true of far fewer Republicans who only somewhat approve of Trump or disapprove of him: 17% and 12%, respectively.1

Overall, this relationship between support for Trump and depressed trust in the news media persists over a range of attitudes. And, taken together, Republicans who are most approving of Trump and Democrats who are least approving of him stand far apart from each other. 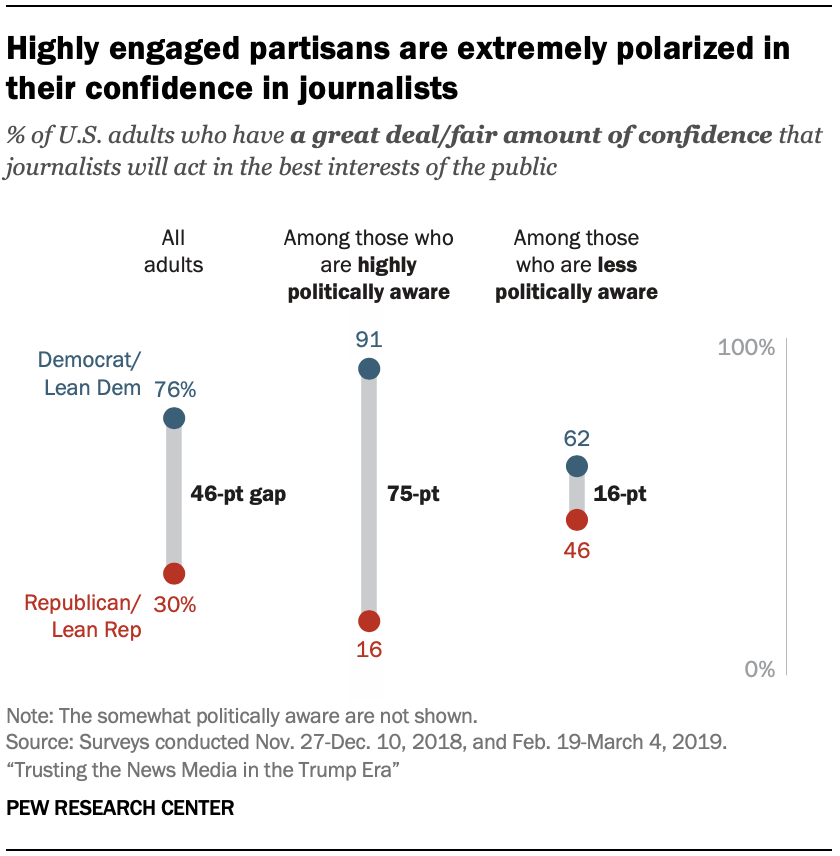 The extent to which a person is engaged with national politics and the news surrounding it also plays into their evaluation of the news media. Highly engaged partisans are even more polarized in their views than the two parties overall. For example, there is a 46 percentage point gap between all Democrats and Republicans (including those who lean to each party) in whether they have a great deal or fair amount of confidence that journalists will act in the best interests of the public. This jumps to a 75-point gap between the highly politically aware who associate with the two parties (91% of highly politically aware Democrats vs. 16% of highly aware Republicans).

No other factors in this study come close to these partisan dynamics in their relationship to Americans’ views. There are a few that show some connection, however. One of these factors is trust in others more generally, or interpersonal trust: Americans who express greater trust in others tend to give the news media higher marks than those who are less trusting. Additionally, there are some interesting differences across demographic groups, such as those based on age, race and ethnicity, religion, and education. For example, black Americans often exhibit greater support of news organizations and journalists than Hispanic or white Americans. And older Americans are more loyal to their preferred news sources than younger Americans. Other concepts such as life cycle milestones and life satisfaction measures show limited, inconsistent or no relationship with evaluations of the news media.

The overall goal of this study was to integrate a wide range of concepts to develop a comprehensive understanding of the factors that link to the public’s trust in the news media today. Researchers pulled together years of Pew Research Center surveys conducted on the American Trends Panel and examined responses from the panel members across these surveys. Using advanced statistical weighting and multivariate analyses, attitudes toward the news media – including direct measures of trust as well as closely related measures – were set alongside a wide range of other measures to examine what connects to trust in the news media. For more information on the methodology of the study, see the box below and the methodology section.

The purpose of this study was to leverage data from multiple surveys to develop a comprehensive understanding of what factors connect to the public’s trust in the news media. For years, Pew Research Center has surveyed Americans’ views of the news media across multiple dimensions – from trust in the information they get from news organizations, to their confidence in journalists’ ability to do their job, to support for the news media’s watchdog role, among others. This study analyzed a range of measures that are related to trust in the news media – including those that directly measure trust as well as closely related topics – pulled from multiple surveys conducted on the Center’s American Trends Panel (ATP), a nationally representative panel of randomly selected U.S. adults.

Researchers combed through more than 50 ATP surveys conducted between 2014-2019, looking for measures that assess the public’s trust in the news media as well as potential factors that are related to these evaluations, with the focus of the final analysis on measures collected since 2018. Well over 100 questions were included in the initial analysis, which were then limited to the final measures discussed in this report. There were a number of reasons why certain variables did not make the final cut, including sample sizes and conceptual duplication. The selection of trust measures and explanatory factors in this study were largely based on previous Pew Research Center data as well as existing literature around trust in the news media.

Since the ATP is a panel, researchers can combine respondents’ answers to questions across many surveys, crossing variables from different points in time in unique ways. For example, researchers analyzed a question on President Donald Trump’s job performance collected April 29-May 13, 2019, with a question on trust in information from national news organizations collected July 8-21, 2019. This study analyzes variables both within a single survey and across survey waves. For each combination of surveys, special weights were created for the sample of respondents that answered both surveys to maintain national representation.

For this study, the measures of trust in the news media and closely related concepts focus on the news media, journalists and national news organization generally. Other research has shown that Americans’ views and habits around individual news outlets vary dramatically from outlet to outlet. And again, partisanship plays a substantial role in outlets that Americans trust and get news from.

For additional information, read the methodology.

Next: 1. Within both parties, approval of Trump is closely linked to trust in the news media Next Page → ← Prev Page