The public’s level of engagement – both politically and with the news – adds another dimension to partisans’ evaluations of the news media. Divides within the parties once again emerge, and partisans who are highly engaged are the most polarized in a range of views of the news media. 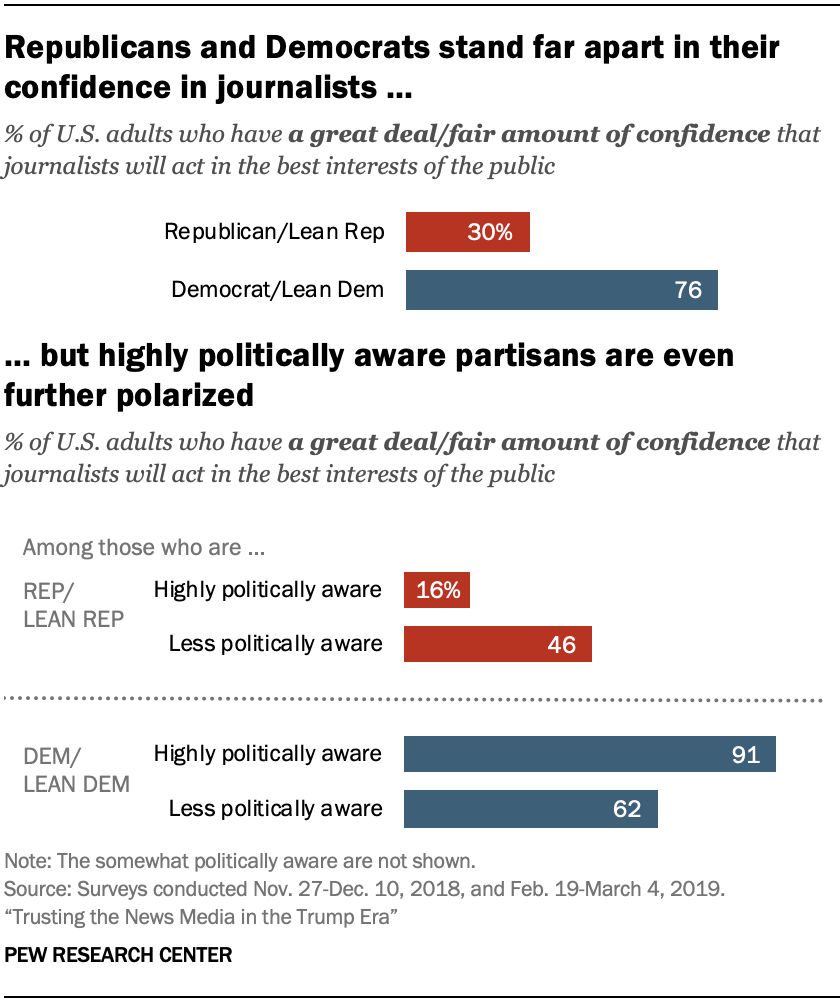 For example, Americans’ level of confidence that journalists will act in the best interests of the public clearly shows how partisan divides are even starker among the highly engaged. In this case, the two parties begin with quite different levels of confidence – 30% of Republicans versus 76% of Democrats overall have a great deal or fair amount of confidence. But then looking within party, highly politically aware Republicans are 30 percentage points less likely than less aware Republicans to say this (16% vs. 46%). And highly aware Democrats are 29 points more likely than their less aware counterparts to express this level of confidence (91% vs. 62%). 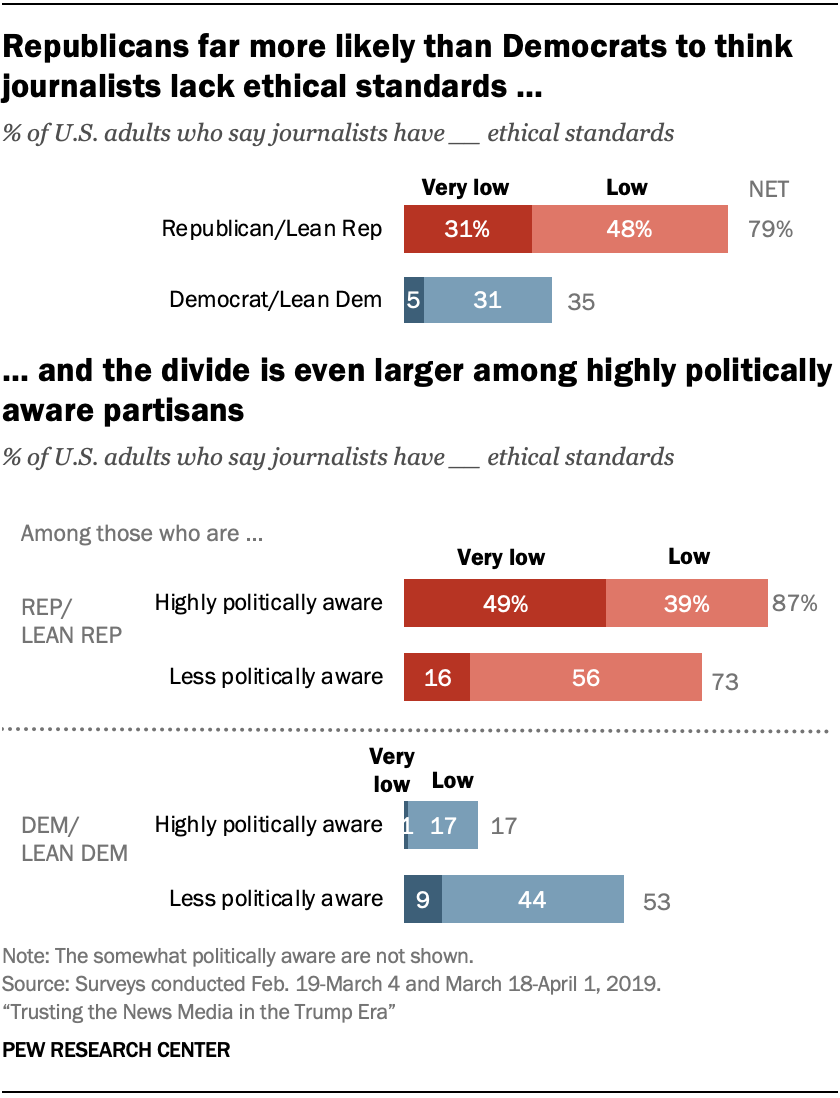 On the other measures of trust analyzed in this study, there are also large divides between highly engaged Republicans and Democrats on their trust in the information from national news organizations, views of the media’s watchdog role, and perceived fairness in coverage.6 These stark divides between highly engaged Republicans and Democrats are in line with previous studies that show large divides in political attitudes between the most engaged partisans.

How we measure engagement

In this study, we examined two different measures of engagement – political awareness and news engagement. Below is a description of how each of the two measures was constructed.

The knowledge questions for the political awareness measure and the seeking question for the news engagement measure were asked on a survey conducted Feb. 19-March 4, 2019. The questions about following government and public affairs and following news were asked Aug. 20-Oct. 28, 2018. Engagement with politics and the news is not substantially connected to political party identification. For instance, highly politically aware adults make up about equal portions of both major parties – 33% of Republicans and Republican leaners and 32% of Democrats and Democratic leaners.

Across the measures in the analysis presented here, the middle groups mostly fall somewhere in between the highly engaged and the less engaged, though they occasionally fall closer to one group or the other. The findings in this section show the results comparing the “highly” and “less” engaged for each. For a look at the findings that include the “somewhat” engaged for both measures as well as a look the overall relationship between the two measures of engagement and trust, see the Appendix.

Partisans have similar levels of loyalty to their sources of news

While there are profound political divides in Americans’ views of the news media and journalists generally, partisanship is less connected to the public’s sense of loyalty to their own individually preferred sources of information – that is, those sources they tend to rely on most. Instead of stark divides, the most fervent partisans – Trump’s strongest approvers and detractors as well as those who are highly engaged with politics or with the news – are much more on par in their sense of loyalty and tend to be more loyal than their less fervent counterparts. 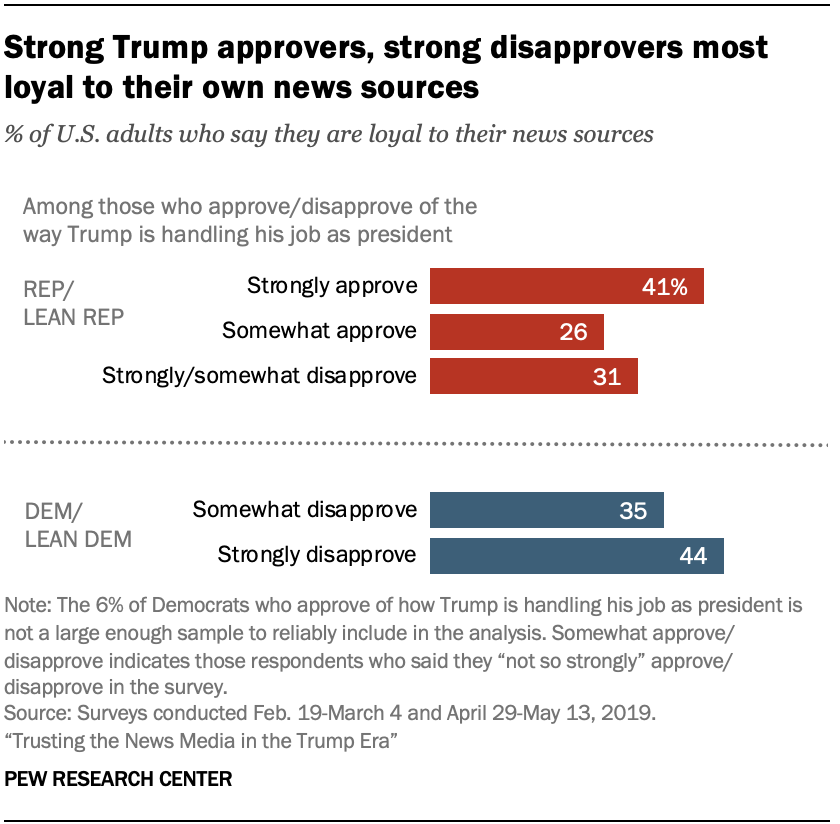 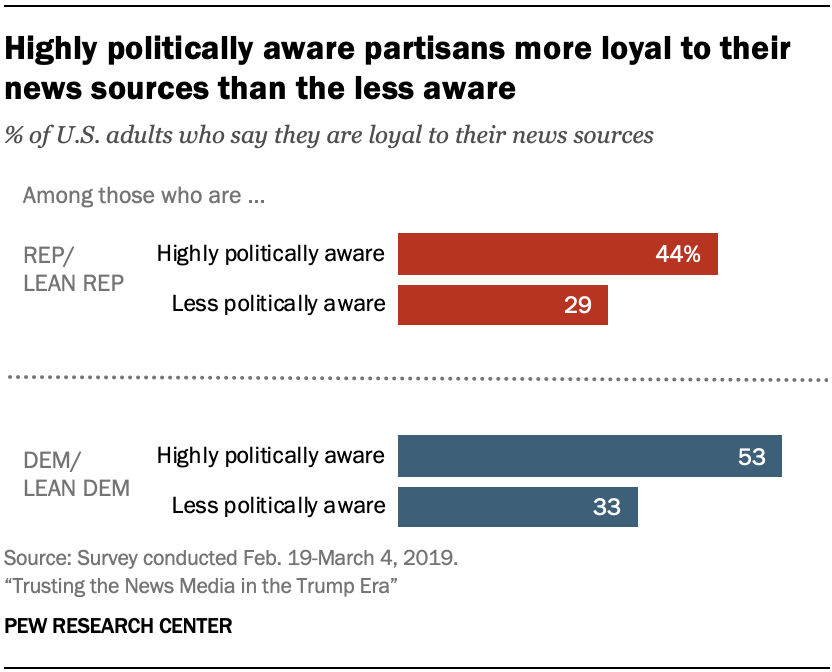 The highly engaged in each party – whether with politics or with the news – feel more loyal to their news sources than their less engaged counterparts. For instance, about half of the highly politically aware (49%), say they are loyal to their sources of news, 18 percentage points higher than the less aware (31%) – a pattern that is evident within both parties. Highly politically aware Republicans are 15 points more likely than less aware Republicans to feel loyal to their news sources, and highly aware Democrats are 20 points more likely than less aware Democrats. Again, the same pattern exists with the other measure of engagement – engagement with the news.

Next: 3. Factors beyond party affiliation also connect with trust in the news media Next Page → ← Prev Page