Politicians viewed as major creators of it, but journalists seen as the ones who should fix it

Many Americans say the creation and spread of made-up news and information is causing significant harm to the nation and needs to be stopped, according to a new Pew Research Center survey of 6,127 U.S. adults conducted between Feb. 19 and March 4, 2019, on the Center’s American Trends Panel.

Indeed, more Americans view made-up news as a very big problem for the country than identify terrorism, illegal immigration, racism and sexism that way. Additionally, nearly seven-in-ten U.S. adults (68%) say made-up news and information greatly impacts Americans’ confidence in government institutions, and roughly half (54%) say it is having a major impact on our confidence in each other.

U.S. adults blame political leaders and activists far more than journalists for the creation of made-up news intended to mislead the public. But they believe it is primarily the responsibility of journalists to fix the problem. And they think the issue will get worse in the foreseeable future.

The vast majority of Americans say they sometimes or often encounter made-up news. In response, many have altered their news consumption habits, including by fact-checking the news they get and changing the sources they turn to for news.

In addition, about eight-in-ten U.S. adults (79%) believe steps should be taken to restrict made-up news, as opposed to 20% who see it as protected communication.

Similar to Americans’ news attitudes generally, stark partisan differences exist when it comes to made-up news and information, particularly in the area of assessing blame. Differences also emerge based on political awareness and age. In general, Republicans, the highly politically aware and older Americans express higher levels of concern about the impact of made-up news than their counterparts.

These concerns about made-up news are mingled with pessimism about the future of the issue. Most of those surveyed (56%) think the problem will get worse over the next five years. Only one-in-ten believe progress will be made in reducing it.

Americans do not blame journalists the most for creating made-up news and information, but put most responsibility on them to fix it 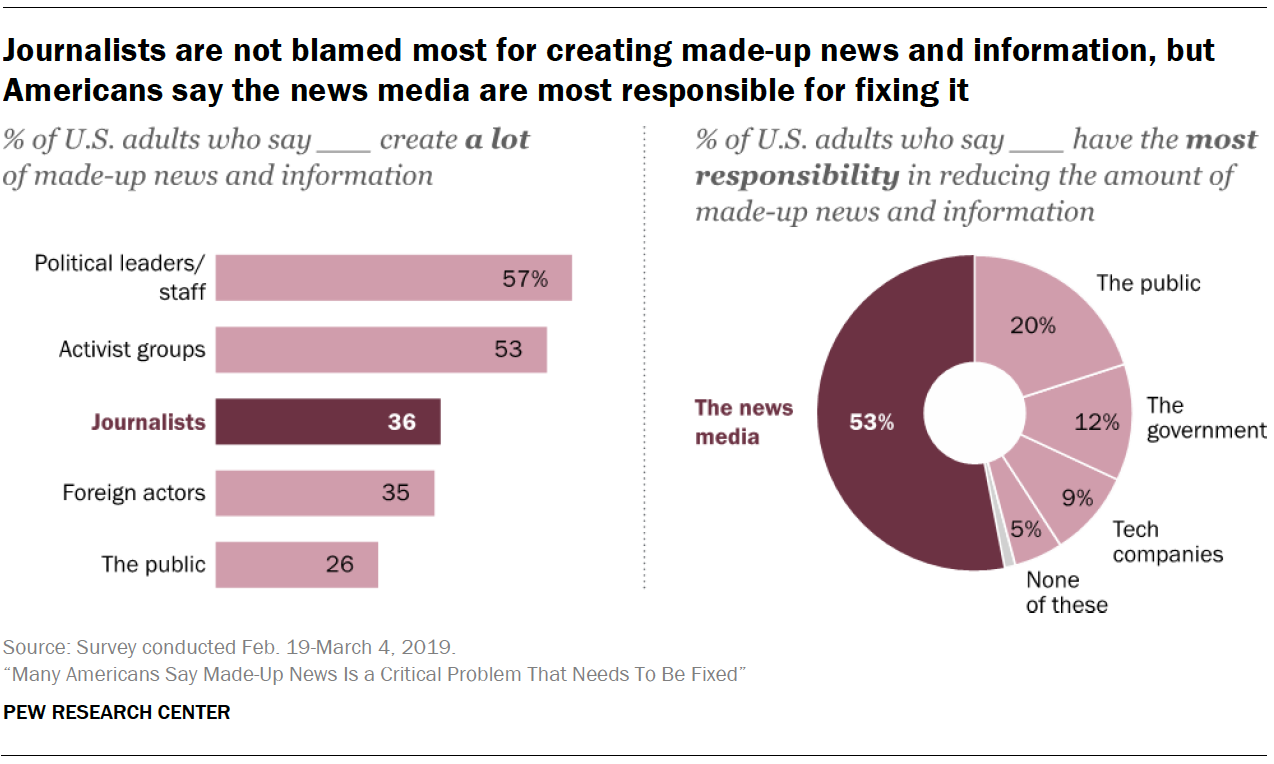 Even though Americans do not see journalists as a leading contributor of made-up news and information, 53% think they have the greatest responsibility to reduce it – far more than those who say the onus mostly falls on the government (12%) or technology companies (9%).

A somewhat larger percentage of those surveyed (20%) say the public itself bears the most responsibility to reduce it. But another finding suggests the challenges inherent in that effort. Of the 52% of Americans who say they have shared made-up news themselves, a vast majority of them said they didn’t know it was made up when they did so.

Almost four-in-ten Americans (38%) say they often come across made-up news and information, and another 51% say they sometimes do. Given their concerns about made-up news, Americans have also changed their news and technology habits. Almost eight-in-ten (78%) say they have checked the facts in news stories themselves. Roughly six-in-ten (63%) have stopped getting news from a particular outlet, about half (52%) have changed the way they use social media and roughly four-in-ten (43%) have lessened their overall news intake.

Concern about made-up news has also affected how U.S. adults interact with each other. Half say they have avoided talking with someone because they thought that person would bring made-up news into the conversation.

Not all Americans say they experience the same level of exposure to made-up news and information or express the same level of concern. In addition, people disagree about who is responsible for it and who should shoulder the burden to reduce it. Perhaps not surprisingly, some of the greatest divides occur along party lines.

Just as Republicans express greater skepticism than Democrats about news coverage and the news media more generally, they see made-up news as a bigger problem and place far more blame on journalists. 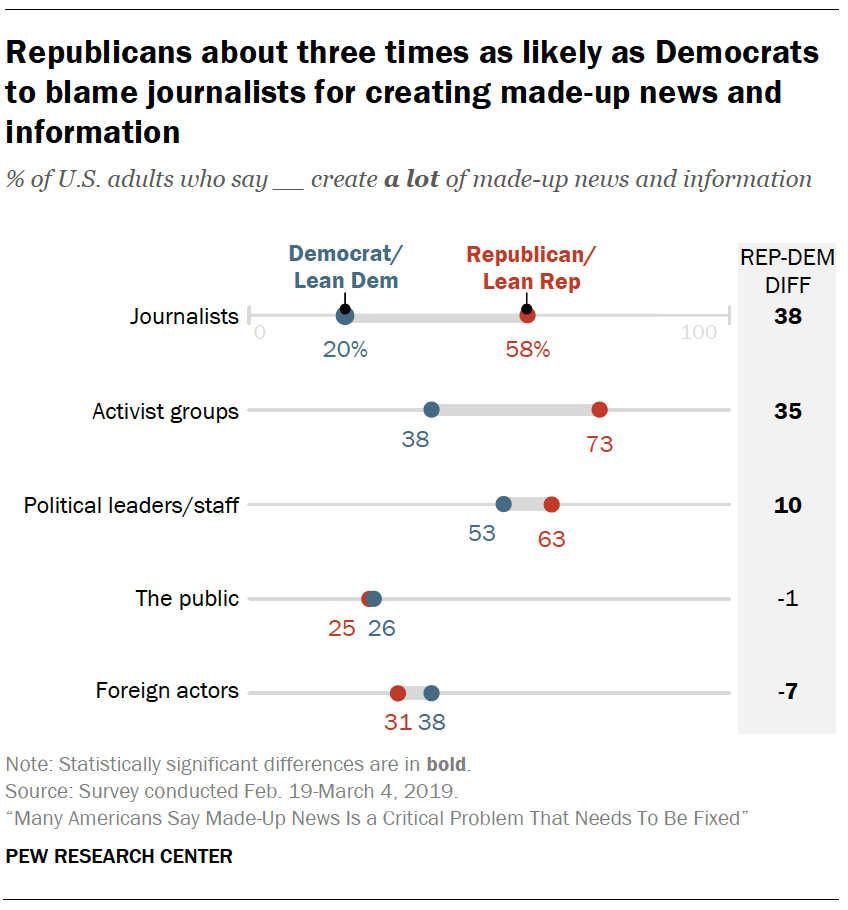 One of the starkest differences, though, is in assigning blame for creating made-up news and information. Republicans are nearly three times as likely as Democrats to say journalists create a lot of it (58% vs. 20%).

Republicans also place more blame on activist groups, with about three-quarters (73%) saying these groups create a lot, close to twice the rate of Democrats (38%). Political leaders and their staff, though, rank high for both sides of the aisle – half or more of each party say they create a lot. And while members of both parties say the news media bear the primary responsibility for fixing the situation, that feeling is considerably more pervasive among Republicans (69%) than Democrats (42%). 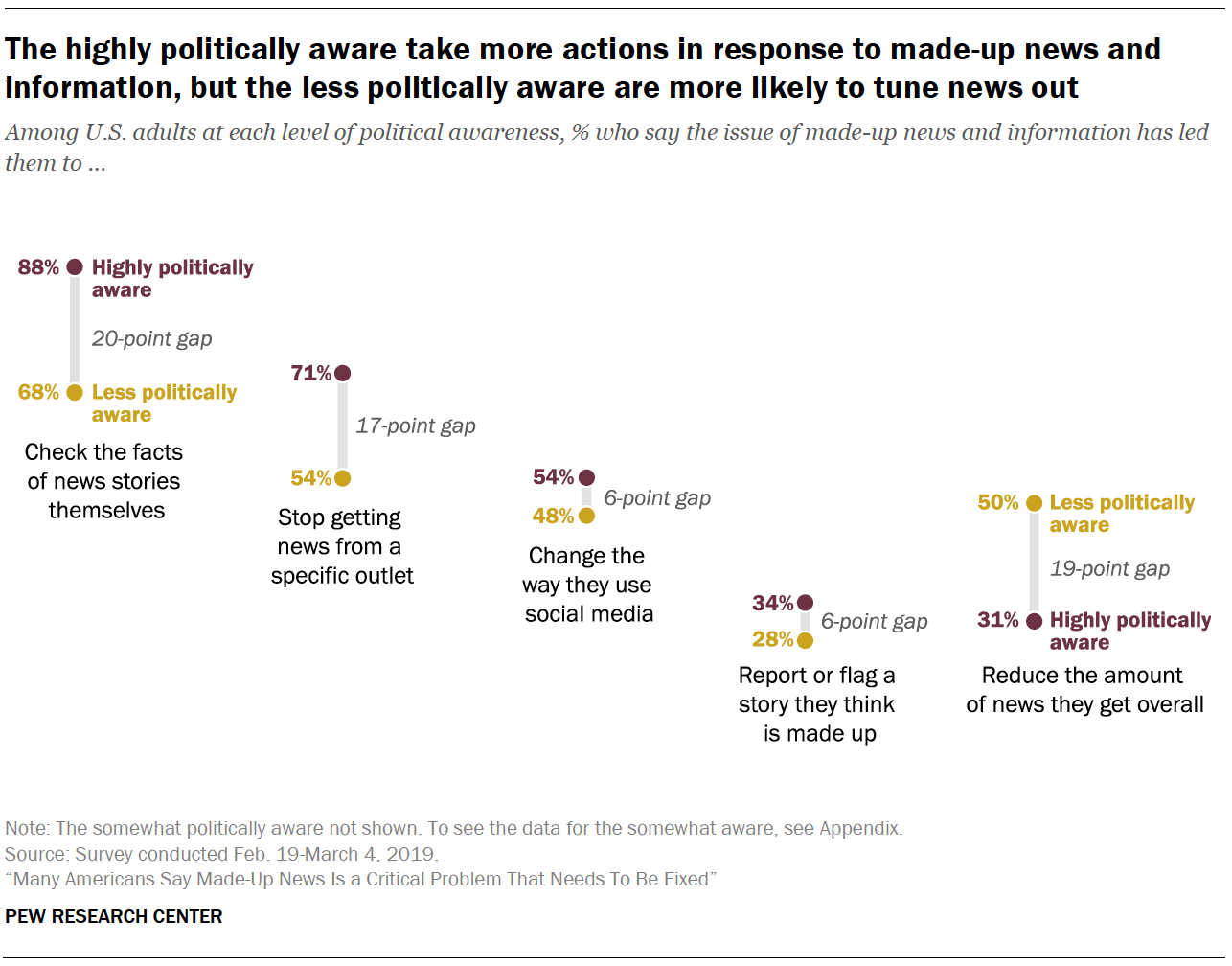 There are also some age-based differences in attitudes toward made-up news. The youngest American adults – those ages 18 to 29 – tend to be less concerned about the impact of made-up news than those older than them, say they see less of it, and are less likely to blame politicians, activists, journalists and foreign actors for it. And like those who prefer social media for news, younger Americans tend to be less pessimistic than their elders about the future of the issue.1 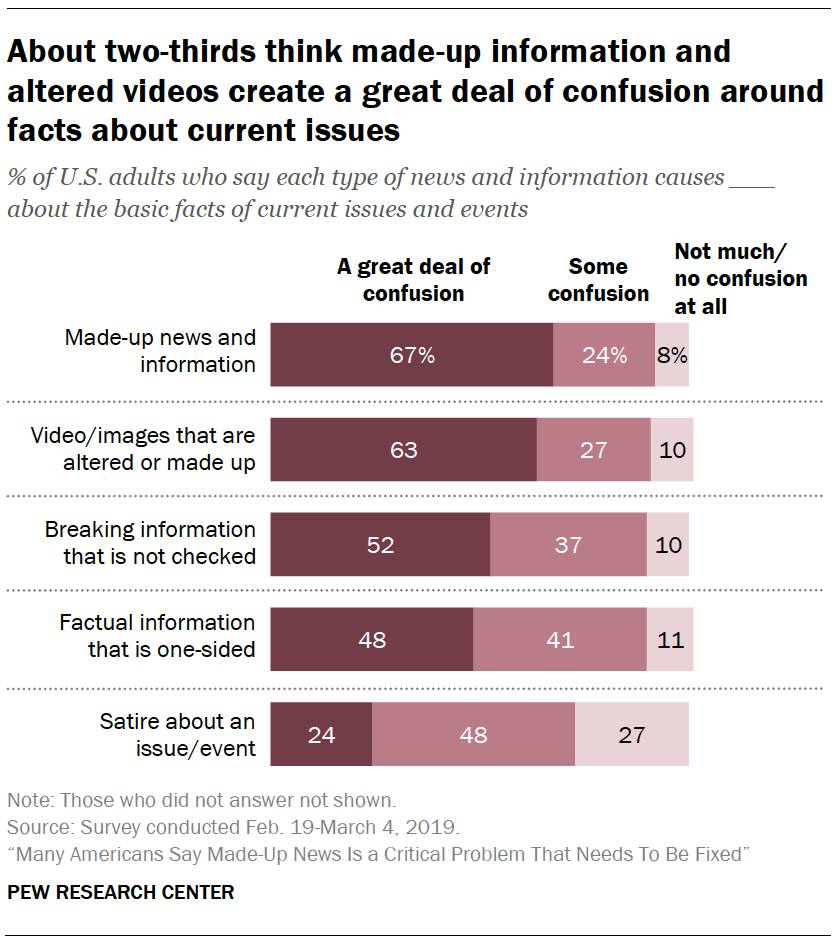 Most of this study focuses specifically on made-up news and information that is intended to mislead the public. But it also examines some other potentially inaccurate or misleading types of information.

Americans make clear distinctions among five kinds of misinformation asked about in this survey, expressing the greatest concern about fully made-up news as well as altered videos and images. Two-thirds (67%) say that made-up news designed to mislead causes a great deal of confusion about the basic facts of current issues, while 63% feel the same way about a video that is altered or made up. And by large majorities, 79% and 77% respectively, they favor restrictions on these kinds of content.

There is significant but less concern about breaking news that is not fully checked and factual information presented in such a way as to favor one side. About half of Americans say those two forms of potentially inaccurate or misleading information cause a great deal of confusion about basic facts, although there is more support for restricting unchecked breaking news (54%) than factual information that is biased (37%).

One form of misinformation that is not perceived nearly as negatively is satire about an issue or event. Only about a quarter of Americans (24%) believe it causes a great deal of confusion about facts and three-in-ten believe it should be restricted.

Next: 1. Americans see made-up news as a bigger problem than other key issues in the country Next Page → ← Prev Page