1. Americans see made-up news as a bigger problem than other key issues in the country 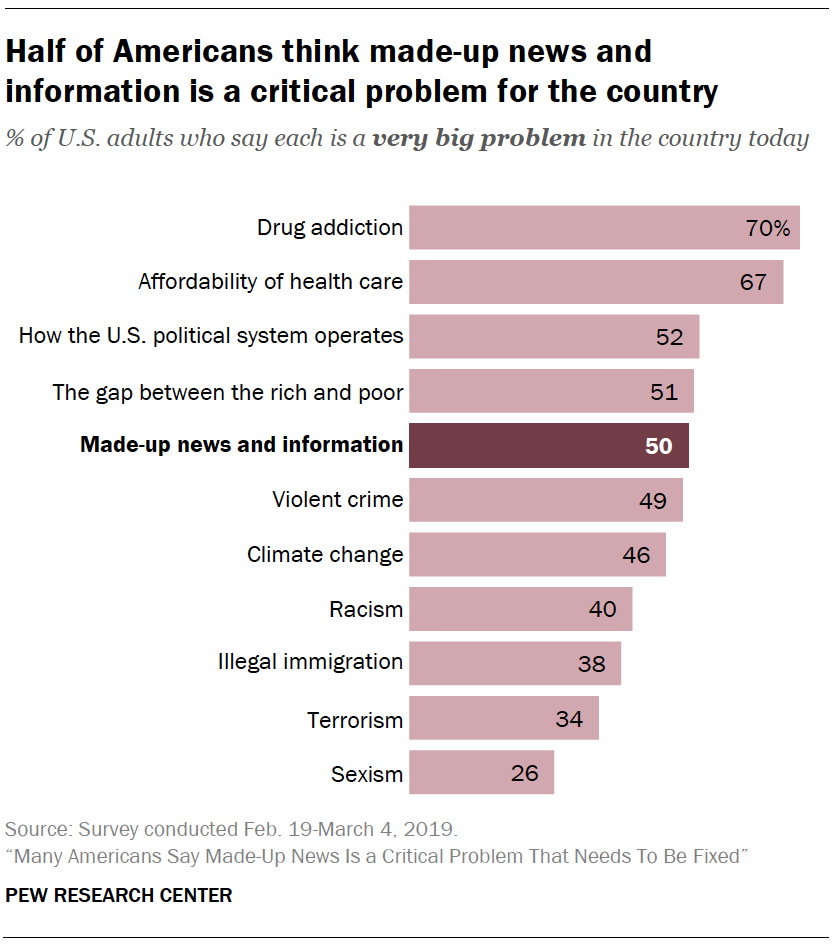 Half of Americans say the issue of made-up news and information is a very big problem facing our country, ranking it ahead of a number of other major national concerns. Majorities think it is negatively impacting our democratic system and societal functions. And, among the concerns related to Americans’ ability to keep up with current events, the problem of made-up news rises to the top.

When asked about 11 major issues facing the country, concern over made-up news is significantly exceeded by only two of them – drug addiction (70%) and affordable health care (67%). Half of adults say made-up news and information is a very big problem for the country. That places it above terrorism, illegal immigration, racism and sexism – and roughly on par with the gap between the rich and poor, violent crime, the way our political system operates and climate change. 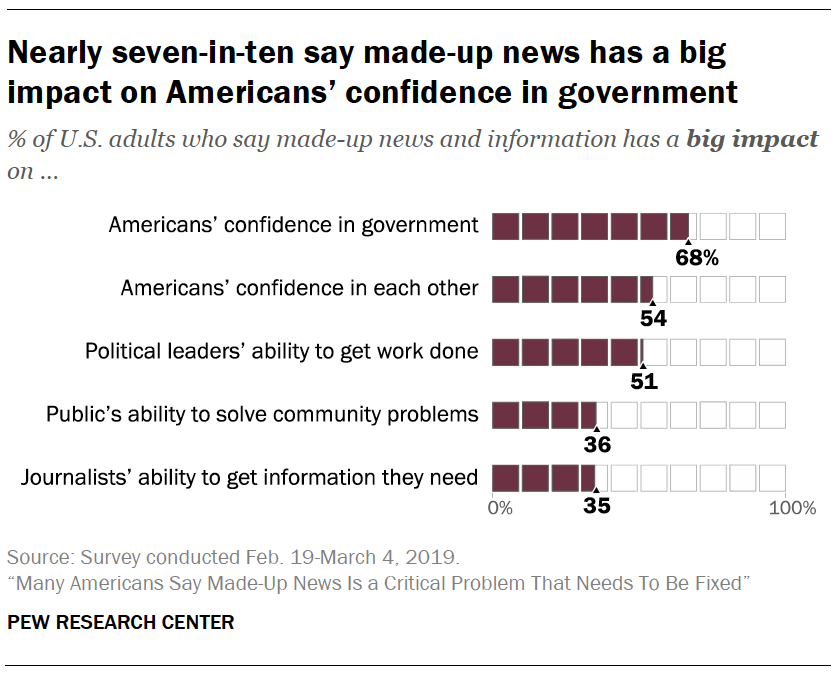 Many U.S. adults also think made-up news and information has a detrimental effect on the country’s democratic system. Nearly seven-in-ten (68%) say made-up news has a big impact on Americans’ confidence in government. About half say it greatly impacts people’s confidence in each other (54%) and in political leaders’ ability to get things done (51%). Fewer see it as a major impediment to the public’s ability to solve community problems (36%) or journalists’ ability to get the information they need to report the news (35%). 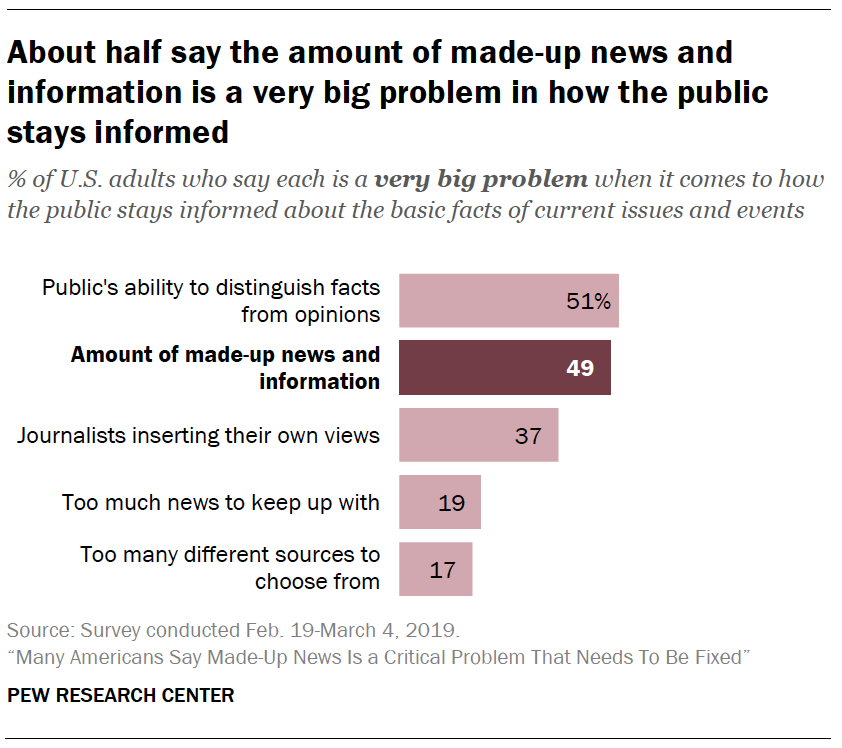 Thinking about the news environment, about half (49%) say the amount of made-up news and information is a very big problem in how the public stays informed. That puts it at the top, along with the public’s ability to distinguish between facts and opinions (51%). These concerns outweigh others, including journalists expressing their views in their reporting (37%), the vast amount of news to keep up with (19%) and the large array of information sources (17%).

Most Americans say steps should be taken to address made-up news, see political divides as the greatest obstacle

While the public overwhelmingly wants made-up news reduced, people are pessimistic about the chances of success.

About eight-in-ten Americans (79%) think steps should be taken to restrict made-up news and information intended to mislead, while 20% say it is more important that the freedom to access and publish it be protected.2

A similarly high level of support emerges for restrictions on made-up or altered videos and images intended to mislead: 77% of Americans say steps should be taken to restrict the publication of and access to this type of content.

But a majority of those surveyed (56%) think the problem of made-up news will get worse over the next five years. About a third (32%) think it will stay the same, and only one-in-ten say it will get better. 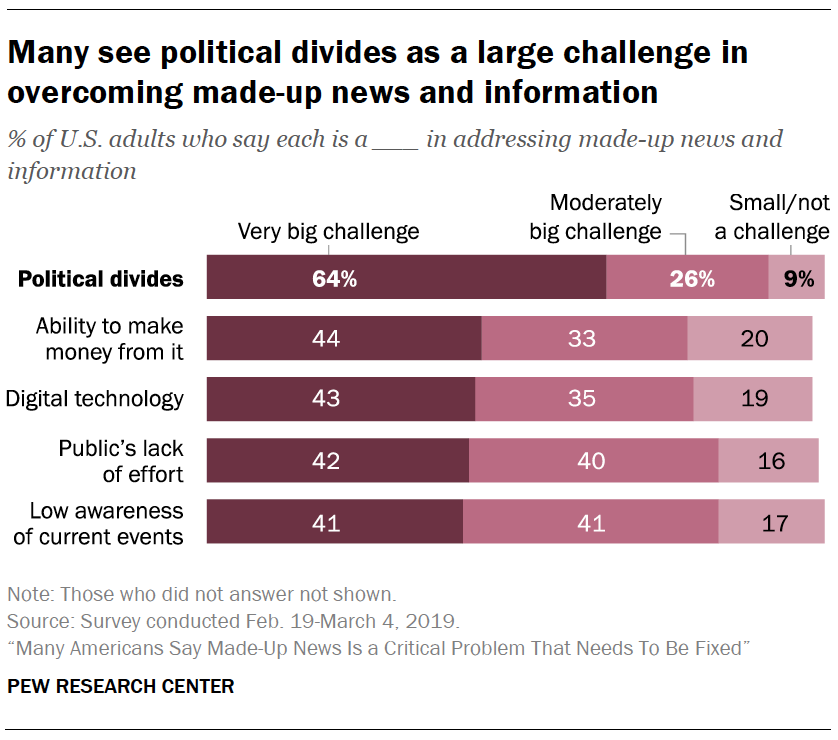 The biggest obstacle people see standing in the way of addressing made-up news is political division in the country. Nearly two-thirds (64%) say political divides are a very big challenge, and about another quarter (26%) say they are a moderately big challenge.

That far outpaces other possible challenges, though all five issues asked about are seen as very big challenges by at least four-in-ten U.S. adults. These areas include the attraction of making money from made-up news (44% say this is a very big challenge), digital technology (43%), the public’s lack of effort (42%) and low awareness of current events (41%).

Made-up news and information reaches the vast majority of U.S. adults; about half have shared it unknowingly 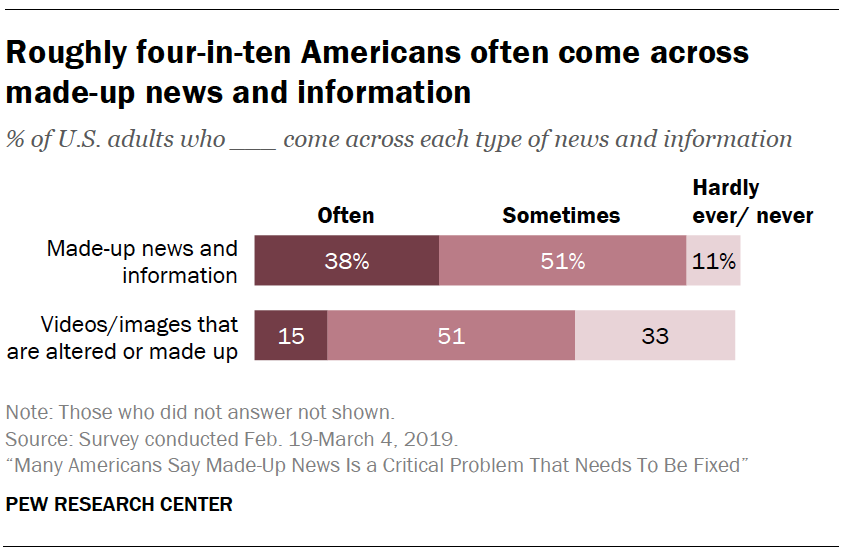 One likely reason why so many Americans feel made-up news and information is a significant problem for the country is the extent to which Americans say they are exposed to it. About nine-in-ten U.S adults (89%) say they often or sometimes come across made-up news intended to mislead the public, including 38% who do so often. That leaves only about one-in-ten U.S. adults (11%) who say they hardly ever or never encounter it.

In the era of viral videos, altered or fully made-up videos or images designed to mislead the public also have a substantial reach. About two-thirds of Americans (66%) encounter altered or made-up videos/images at least sometimes, while 15% do so often. One-third say they hardly ever or never see them. 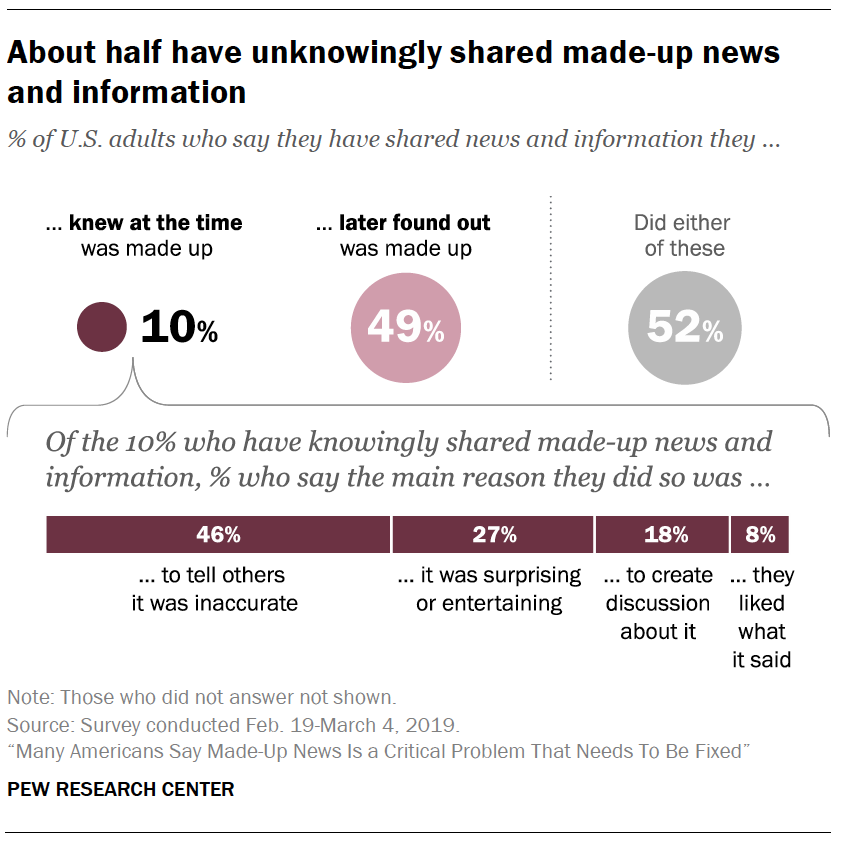 The full reach and impact of made-up news and information depends in part on how much individuals share content they come across with others. About half (49%) of Americans have shared news that they found out later was made up. One-in-ten confess to sharing news they knew at the time was made up. (Of the relatively few who knowingly did so, about half – 46% – say the reason for sharing was to let others know it was inaccurate.) Overall, 52% of Americans have shared made-up news knowingly and/or unknowingly.

And, whether they’ve shared it or not, about six-in-ten Americans (61%) say they at least sometimes discuss the issue of made-up news with others, while 16% do so often.

Next: 2. Political leaders, activists viewed as prolific creators of made-up news; journalists seen as the ones to fix it Next Page → ← Prev Page