5. The importance of local news topics often does not align with how easily the public can find information about them

As many newsrooms face declines in revenues and staffing, one difficult choice to make is where to focus coverage and resources. This study asked Americans about the weight of 11 different local news topics in their lives, ranging from needing a daily news fix to having no interest at all, and how easy it is to stay informed about each. The findings indicate that Americans differ in the importance they place on local news topics and in the ease with which they get that information. And often, the topics Americans rank as high in importance are not the ones for which they feel news is easy to find. 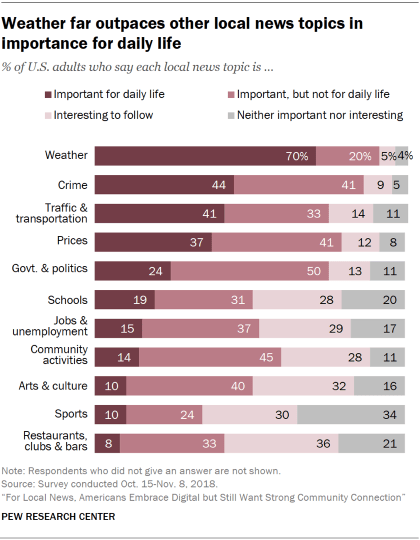 While a number of local news topics are seen as important or interesting, only one of the 11 ranks as important for their daily life by a majority of Americans: the weather, named by 70%.

Crime, traffic and changing prices come next, with roughly four-in-ten or more saying each is vital information for daily life. No more than a quarter of Americans, on the other hand, say that any of the remaining seven topics – such as sports, arts and culture or jobs – are important for daily living.

Just 8% feel they need daily restaurant news, but a third consider it an important topic to follow generally and about another third (36%) say it is interesting to keep up with. Sports is the only topic for which a sizable portion of Americans (34%) say it is neither important nor interesting to follow, though most Americans have at least some interest in the topic. 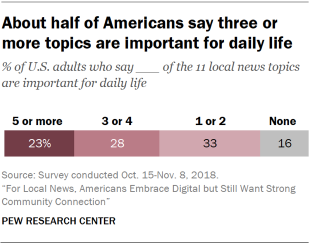 How easy is it for American local news consumers to stay informed on topics of interest? The answer is: It varies. Weather is deemed the easiest to keep up with, with 76% of those who are at least interested in the topic saying they have no trouble getting the news they need. At the opposite end are jobs and unemployment. Only 21% of consumers who are at least interested in this topic say keeping informed is very easy, while 24% say it’s somewhat or very hard. 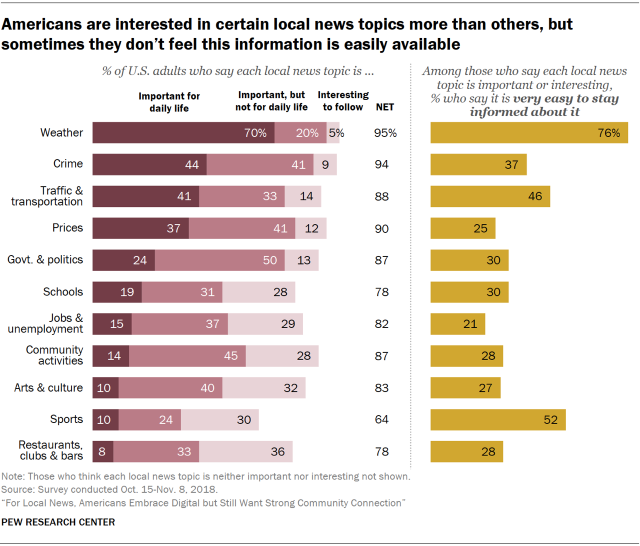 Across all 11 topics, up to about two-in-ten (21%) find some topics somewhat hard to keep up with, though very few – no more than 3% – say any of them is very hard.

A local topic’s importance and the perceived availability of news on that topic do not always line up. Some topics are important for many Americans’ daily lives but not particularly easy to stay informed about, while others are not seen as important by many people but rank higher in ease.

Take the topic of changing prices. About four-in-ten Americans (37%) say information about prices is important to follow for their daily lives. However, only a quarter of those who are at least interested in the topic say it is very easy to stay informed about it.

Conversely, sports ranks toward the bottom in importance for daily life (10%) but is one of the easiest local topics for Americans to find information on: About half of those who think it is at least interesting (52%) say it is very easy to stay informed about it.

Some topics, like traffic, rank high in importance and in ease: About four-in-ten U.S. adults (41%) say traffic is an important topic for daily life (third-highest among all topics). And among those at least interested in the topic, 46% say it is very easy to stay informed about it, making traffic the third-most accessible topic of the 11. 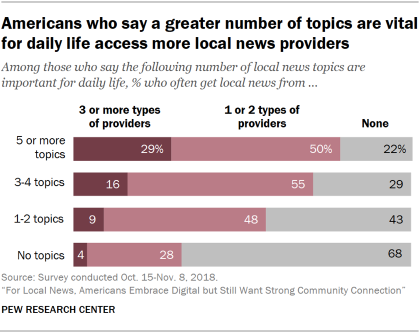