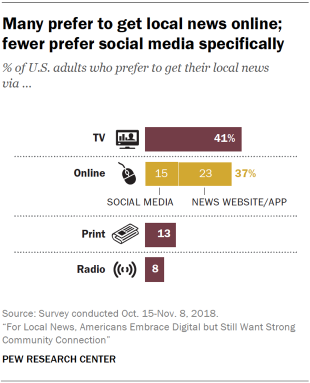 A more in-depth look at the findings across this study that relate to social media reveals that, overall, social media plays a moderate role in local news – sometimes eclipsing traditional pathways in popularity but still being decidedly less prominent than the television. It is more commonly preferred by Americans living in some types of local areas, such as those with younger residents and a higher proportion of Hispanic and black residents. In addition, those who prefer social media as a pathway to local news tend to follow local news less closely.

Roughly one-in-four U.S. adults often get local news from either social media (25%) or websites and apps (26%); 72% and 81%, respectively, ever get news through these digital means. 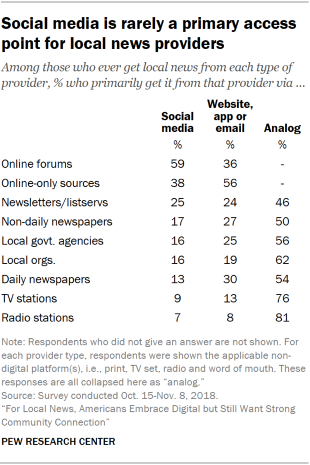 This lower prominence also comes through in a separate question about how important social media is as a way of getting local news. Only 14% of U.S. adults name it as most important, four-in-ten say is it somewhat important and about two-in-ten (17%) say it is not an important way at all.

Finally, the public sees social media as a moderately important part of news organizations’ digital offerings. Fewer online news consumers say regularly updated social media accounts are important to their online news experience (51%) than say that of an easy-to-use website (82%) or a schedule of local events (59%). But regularly updated social media accounts do score higher on this measure than videos (43%) or the ability to comment on news stories (31%). Separately, just 21% of U.S. adults say it is very important for journalists to be active on social media, while nearly four-in-ten (37%) say it is not very or not at all important.

One section of this study examines how news habits differ based on the characteristics of local communities, such as those with a higher proportion of Hispanics or lower voter turnout.5 Residents of the following types of communities are more likely to prefer social media as their main pathway to local news:

Americans’ personal demographics influence their preference for social media in similar ways. Social media is more likely to be the preferred pathway to local news among: 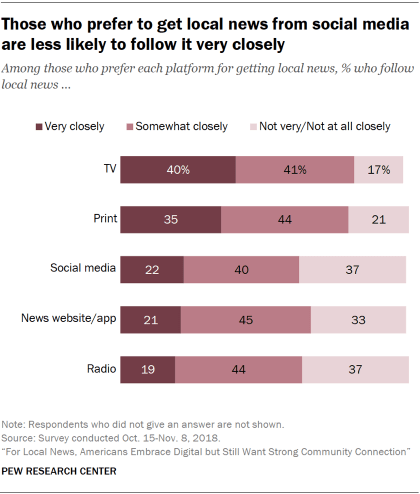 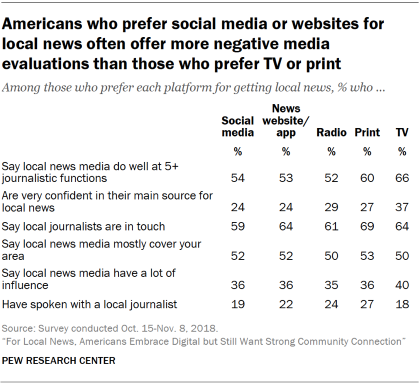 Finally, Americans who prefer social media are often more negative about the local news media than those who prefer TV or print, but they do not consistently stand apart from those who prefer websites or radio. Looking specifically at social media versus the TV set as a pathway to local news, Americans who prefer social media are less likely to see their local news media doing well at multiple job roles or being in touch, and they are less confident that their main source of local news can get them the information they need. But on questions of local media being influential or covering their local area, these groups do not differ.