1. Nearly as many Americans prefer to get their local news online as prefer the TV set 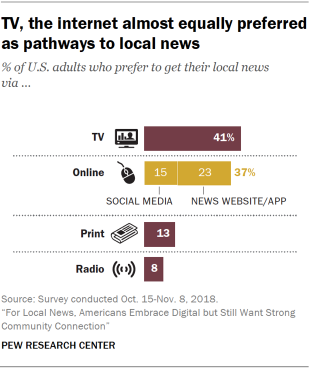 The digital environment is now a key component in how Americans learn about local events and issues in the news. Today, almost as many U.S. adults say they prefer to get their local news through the internet as prefer to do so through the television set. 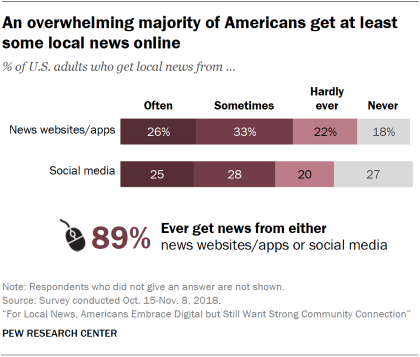 Specifically, when asked which pathways they prefer to use for local news – the television set, the internet (either through social media or websites/apps), print or radio – nearly the same portion of U.S. adults say they prefer an online method (37% total, including 23% who favor news websites or apps and 15% who name social media) as say they prefer television (41%). Far fewer prefer print newspapers (13%) or radio (8%). This close split between TV and online pathways tracks closely with how Americans access news more generally.

Beyond digital being the preferred pathway, 89% of Americans get at least some local news digitally and about four-in-ten (41%) do so often. This breaks down to about equal shares who often get local news specifically from social media (25%) and online news websites or mobile apps (26%). 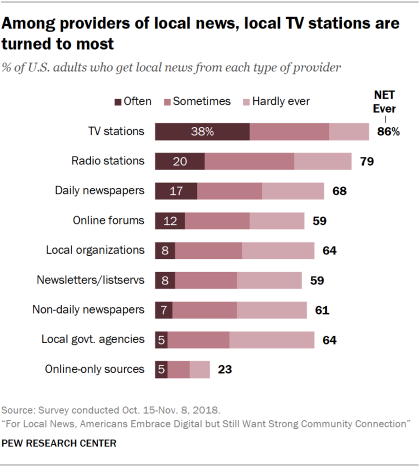 In addition to the various pathways used to get local news – online sites, apps, television, print and radio – consumers can turn to a growing range of specific sources. In most cases these sources now offer content through several pathways. For example, someone who turns to their local newspaper for news can access it in print, via its website or by following the outlet on social media.

To untangle this complex system, this study first asked respondents how often they get local news from each of nine different providers (such as local TV stations or community newspapers), and then asked how they tend to access that source (whether print, television, the internet, etc.).

Beyond these more commonly used providers are a class of sources for local information that few Americans rely on often, but from which most get local news at least occasionally. For example, 12% of Americans often get local news from online forums, while almost six-in-ten ever get news there (59%). Other provider types in this group are local organizations such as churches or schools (64% get at least some news there), local government agencies or officials (64%), non-daily community newspapers (61%), and newsletters or listservs (59%). At the bottom of the list – and the only provider that fewer than half ever use for news – is online-only news sources, such as local blogs or nonprofit online news startups.2

Many Americans turn to the online versions of local news providers 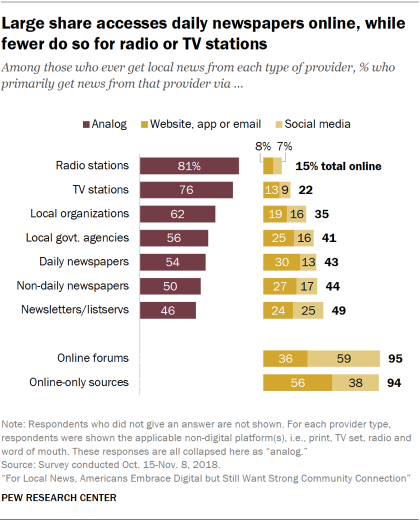 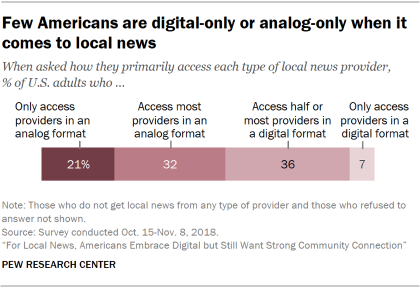 At the same time, few Americans are fully analog or fully digital in the way they get local news. Instead, most (68%) mix online and offline pathways, for example, turning on the TV set to watch their local news station but going online to read the daily newspaper and neighborhood listserv.

Just 7% of Americans indicate that they only use digital pathways as their primary access points. Three times as many U.S. adults (21%) mainly access all providers they get news from through an analog pathway – though this is still also a clear minority. 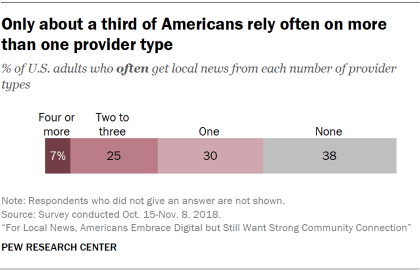 When it comes to Americans’ everyday news habits, most get their local news from a small number of sources. In fact, a sizable portion of the public doesn’t frequently turn to any sources: Nearly four-in-ten Americans (38%) don’t get news often from any of the nine provider types. Three-in-ten regularly rely on a single source type – most often local TV stations – and another 31% often get news from two or more types of sources.

Nonetheless, a large majority of U.S. adults (79%) get at least some news from four or more of the nine types asked about. In other words, while Americans may not frequently get local news from very many providers, their local news diets overall span a wide range of sources.

In many cases, Americans who turn to local news providers more frequently are more likely to access them in analog form rather than digital. Conversely, infrequent news users are more likely than frequent ones to take a digital path.

For example, 90% of those who reliably turn to a local TV station do so primarily on a TV set. This drops to 71% among those who say they engage with local TV stations only sometimes, and 52% among those who say they hardly ever get news there. The remaining shares of each utilize digital options. A similar pattern holds for users of daily newspapers, radio stations and non-daily newspapers: Those who often get news there are more likely than less frequent users to opt for traditional means.4 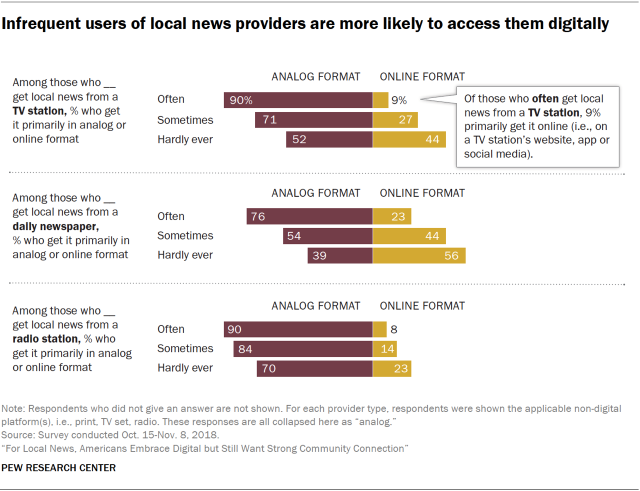 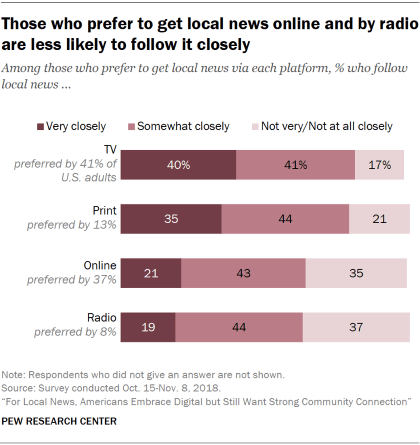 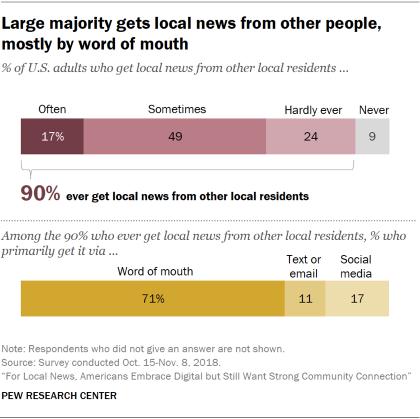 Americans still rely on other people to keep them updated

Beyond media organizations and other information providers, it’s common to get local news from friends, neighbors and family – 90% do so at least occasionally, and 17% do so often. This largely happens by word of mouth (either face to face or over the phone) as opposed to through email, text or social media. 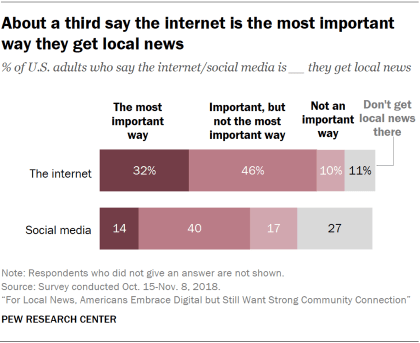 Many say the internet is an important source for local news; fewer say this of social media specifically

When it comes to social media specifically, more than half of Americans (54%) describe it as an important way they get local news, though 14% say it is the most important.

Of the 89% of Americans who get local news online, about half (51%) say they do so primarily through a mobile device; fewer name desktop or laptop computers (27%) and 19% use both equally. This follows patterns in how Americans get their news more generally, with mobile news use overtaking desktop in 2017. 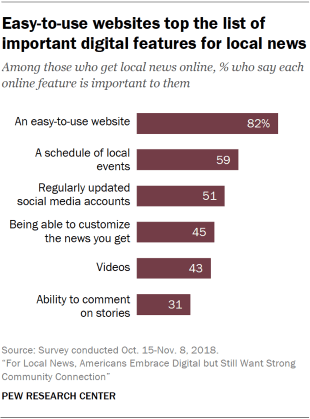 Within the digital news experience, more Americans place value on basic needs than on advanced digital features. A large majority of those who get local news online (82%) say that an easy-to-use website is an important feature of an online local news source. Fewer say other features are a priority – 59% say schedules of local events are an important feature, and about half (51%) say this of regularly updated social media accounts. Customizable news, videos and comment sections rank lower.

The reliance on social media as a pathway to local news raises the question of whether people notice the actual source of the local news they get from these sites. In fact, a majority of those who get local news from social media (64%) say they do pay attention to the sources they see on these sites.

Next: 2. The public places high value on journalists’ connection to the community; fewer say they experience it Next Page → ← Prev Page