3. Americans give fairly high marks to their local news media, especially when journalists are seen as connected to the community 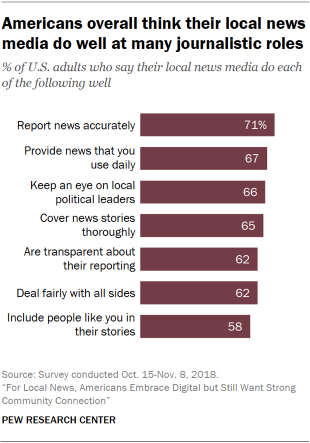 Americans feel pretty good about the job their local news media are doing. Overall, about a quarter (24%) say their local media do very well at keeping them informed on the most important stories of the day, and 81% say they do at least fairly well.

Most also say their local news media do well at seven core job functions. At the top are reporting news accurately (71%), providing “news that you use daily” (67%), keeping an eye on local political leaders (66%) and reporting news thoroughly (65%). Majorities also say their local media do well at being transparent (62%), dealing fairly with all sides (62%) and including “people like you” in their stories (58%).

Confirming past research about other types of news, this study also finds a link between closer attention to local news and more positive job evaluations of local news media. Those who follow local news very or somewhat closely, for example, are 30 percentage points more likely than others to say local news media do well at providing news they use daily (75% vs. 45%). There is something of a natural connection between rating the media poorly and following the news they produce less closely. Less-intuitive relationships between measures such as community connection and job ratings hold true even when controlling for how closely people follow local news.

While most Americans agree it is important for local news media to be connected to their community, they offer mixed views on several measures of that connection. This matters when it comes to job evaluations. Americans who sense their local outlets are well-connected to the community in each of three areas – being in touch with the community, local influence and geographically focused coverage – are much more likely to evaluate local news reporting positively, be confident in their main news source’s ability to inform them, and say it is easy to find news on a range of different topics. 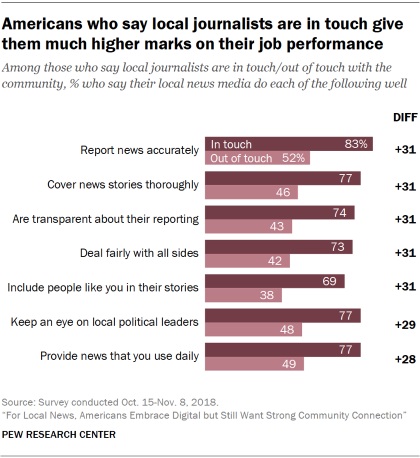 Consider the mix of job functions asked about. While individuals who see local news media as more or less connected tend to rate the importance of these functions similarly, they rate the performance of them very differently. The largest gaps appear between those who feel their journalists are in touch with their community and those who feel they are out of touch. For example, 83% of those who think their journalists are in touch with the community say their local media are doing well at reporting the news accurately, 31 percentage points higher than those who say they are out of touch (52%).

This group is similarly more likely to rate the local news media positively in other areas, including on ethical considerations, such as being transparent about reporting (74% vs. 43%) and dealing fairly with all sides (73% vs. 42%); professional concerns, like covering news thoroughly (77% vs. 46%) and providing news that you use daily (77% vs. 49%); and issues of serving the local community, such as keeping an eye on local political leaders (77% vs. 48%) and including people like them in their stories (69% vs. 38%). 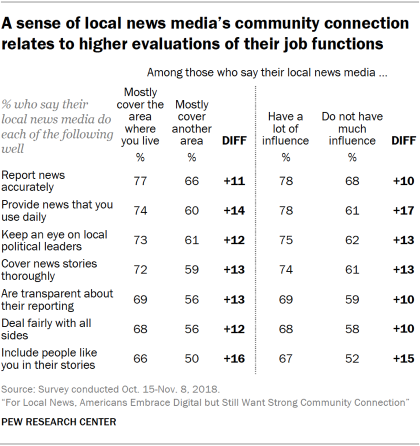 Another measure of journalists’ connection to the community is whether residents feel their coverage is truly local – that it is mostly about the area where they live, rather than a different area such as a nearby city. The roughly half of Americans who feel their news has a more local focus also give their local media higher ratings. That again includes everything from reporting news accurately (77% among those whose media cover their own area vs. 66% of those whose local coverage is about somewhere else) and thoroughly (72% vs. 59%) to dealing fairly with all sides (68% vs. 56%) and including people like you in their stories (66% vs. 50%).

This divide also comes through clearly in the overarching evaluation of how well local media do at keeping people informed of the most important stories of day: 31% of those who find their local journalists to be in touch say they do very well at this, roughly twice the rate of those who see their local media as out of touch (14%). Similar gaps exist between those who see the media as influential or not (35% compared with 18%) and those whose media covers their local area or another area (30% compared with 19%). 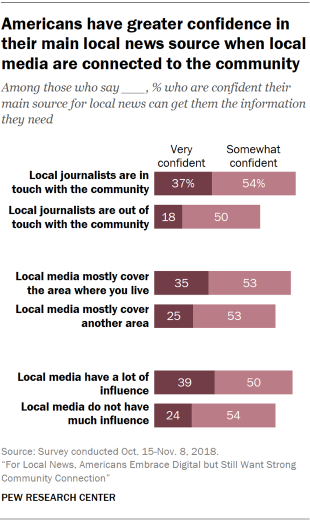 The same trend also emerges when it comes to how confident people are in their main local news source to get them the information they need.

For example, about twice as many of those who think their local journalists are in touch versus out of touch say they are very confident in their main news source (37% vs. 18%).

Another way people assess the job of their local media is how easily they can find the news they are looking for on particular local topics. Those who think their local journalists are in touch are as many as 14 percentage points more likely to find it very easy to get information on topics in which they are interested. This is true, for example, of local crime news (42% vs. 28%), weather (81% vs. 68%), sports (56% vs. 44%) and local prices (27% vs. 21%). 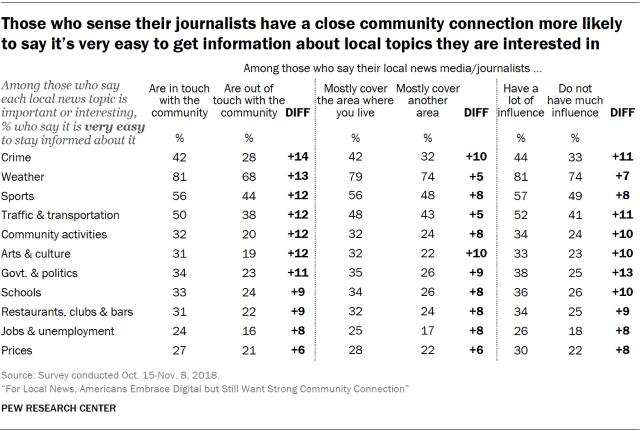 Those who prefer TV also stand out in terms of their confidence in the ability of their main source of local news to provide them the news they need. Roughly four-in-ten (37%) are very confident, compared with 29% who prefer radio, 27% who prefer print and 24% who prefer to get news online. 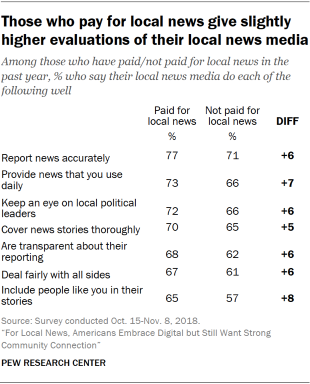 Those who pay for local news also have more confidence in their main source. Nearly four-in-ten (37%) are very confident, compared with about three-in-ten (29%) among those who do not pay.

Next: 4. Most Americans think their local news media are doing well financially; few help to support it Next Page → ← Prev Page