Three-quarters of Americans who prefer watching the news opt for TV, but since 2016, slightly more watchers name the internet as their platform of choice 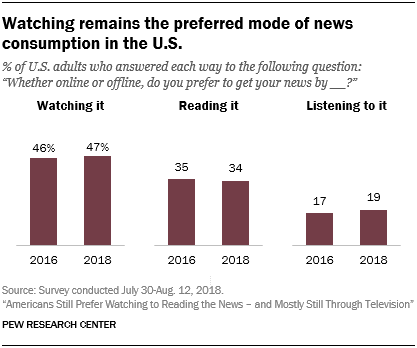 Americans continue to prefer watching the news rather than reading or listening to it, and their viewing loyalties have yet to migrate fully to the web. Instead, the majority of U.S. adults who prefer to watch the news opt for television as their primary news platform, according to a new Pew Research Center survey conducted July 30-Aug. 12, 2018, among 3,425 U.S. adults who are members of the Center’s nationally representative American Trends Panel.

Overall, 47% of Americans prefer watching the news rather than reading or listening to it. That is unchanged from 46% in 2016 and outpaces the 34% who prefer to read the news and 19% who prefer to listen to it – both of which also remain on par with 2016 figures.

In addition to exploring the preferred format for news consumption, the study also measured which platform people preferred most for their news: print, television (through local, network or cable channels), the internet (through websites, apps or social media) or radio. Television continues to rank first as the preferred platform. Just over four-in-ten U.S. adults (44%) prefer TV, compared with about a third (34%) who prefer the web, 14% who prefer radio and 7% who prefer print. The only meaningful shifts since 2016 are a small increase in online and decrease in print news consumption.

The responses become even more revealing when looking at the two questions together: the preferred format for getting news (reading, watching or listening) and the preferred platform as the way to access it (print, television, online or radio).

Despite many recent online news video initiatives and the fact that nearly all adults get at least some news digitally, people who prefer to watch their news still also prefer television as their main platform for news.

Among the roughly half of U.S. adults who prefer to watch their news, the vast majority – 75% –prefer the television as a mode for watching; 20% of watchers prefer the web. On the other hand, most of those who prefer to read their news prefer the web as their platform to receive news (63%); 17% prefer a print product. Listeners vary a bit more; about half (52%) name radio as their preferred platform, 21% name television and 20% name the web.

Since 2016, slightly more watchers name the internet as their platform of choice

Compared with in 2016, when these questions were first asked, those who prefer to watch their news are now slightly more likely to also prefer to get their news online. One-in-five news watchers now name the internet as their preferred platform, versus 12% then.

The portion of readers and listeners who prefer the web has not changed significantly since 2016, when a majority of those who prefer to read their news (59%) already named the web as their preferred platform.

Across all news formats, young adults lead the preference for digital

Adults younger than 50 are more likely than those ages 50 and older to prefer the internet as the platform for getting news, regardless of which format (reading, watching or listening) they enjoy most. 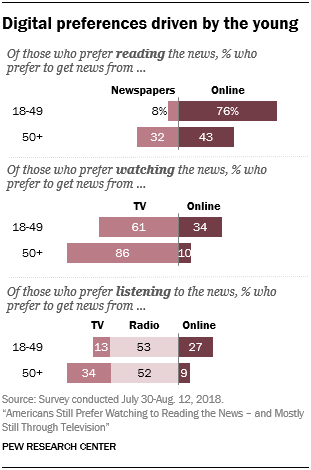 Fully 76% of those ages 18 to 49 who prefer to read the news, for example, also prefer the web, compared with 43% of those 50 and older. Similarly, about three times as many 18- to 49-year-old watchers and listeners prefer to get their news online as their counterparts ages 50-plus.

Among readers especially, the older age group has increased its preference for the web since 2016, though they still trail 18- to 49-year-olds. In 2016, 49% of those ages 50 and older who prefer to read their news also preferred a print paper, while 32% preferred the web.

These findings come in the context of other research by the Center which speaks to a growing reliance on the web for news and a decline in television news viewing. As reported in September 2018, there is just a 6-percentage- point gap between those who say they often get news online and those who do so via television.

At least for now, though, Americans – especially older ones – have a penchant for watching news and getting that news on TV.

CORRECTION (Dec. 4, 2018): In the original version of the chart “News watchers prefer to use the television to get their news, not the web,” the percentages of Americans who prefer reading the news and listening to the news were reversed in the pie chart. The chart has been corrected to read “Prefer listening 19%” and “Prefer reading 34%” to match the report text.