1. Younger Europeans are less likely to get news from legacy platforms 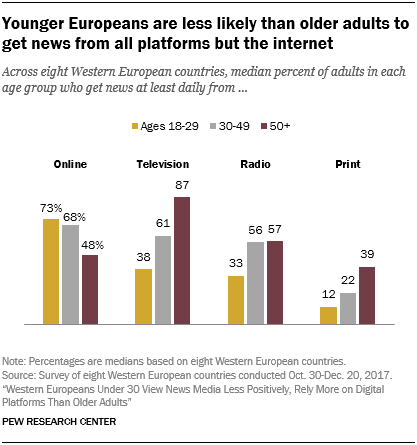 Younger Western Europeans, defined in this study as those ages 18 to 29, tend to go online to get their news. A median of 73% of 18- to 29-year-olds across all eight countries surveyed get news online at least daily, while they get news from other traditional platforms at lower rates: 38% get news at least daily from TV, 33% do from radio and 12% do from print newspapers.

This stands in contrast to those ages 50 and older, who use television the most for news. A median of 87% in this group get news daily from TV, compared with 48% who do online. Adults ages 30 to 49 fall roughly in between the other two age groups for both television and online news consumption, with 61% getting news daily from TV and 68% getting it online.

Younger Europeans’ preference for digital platforms occurs in all eight countries studied, with a majority of those under 30 in each country saying they get news online at least daily. And though substantial portions of adults ages 50 and older also get news daily online (ranging from 37% in the UK to 59% in Sweden), they are less likely than younger Europeans to do so. For example, in Italy, while a majority of those ages 50 and older (56%) get news online at least daily, far more of those under 30 are daily online news users (83%). (See detailed tables for more information.)

In six of the eight countries studied, fewer than half of those under 30 get news on TV at least daily. Italy and Spain are the only exceptions, where about two-thirds of younger adults get news from TV daily. TV news use among this age group is the least popular in Denmark, Sweden and the UK, where roughly a third of adults under 30 get news daily from TV.

Few younger Europeans get daily news from print sources in hard copy – no more than 20% of those ages 18 to 29 do so in any of the countries studied, and as few as 10% do in the UK. The age differences in print news use are especially wide in Germany and Sweden, where adults under 30 are 44 percentage points less likely than those 50 and older to get news from print daily.

Western Europeans under 30 gravitate toward online sources, while those 50 and older prefer TV as their main source for news

Next: 2. Younger Europeans are far more likely to get news from social media Next Page → ← Prev Page