1. Most Americans have heard about social media bots; many think they are malicious and hard to identify

By Galen Stocking and Nami Sumida 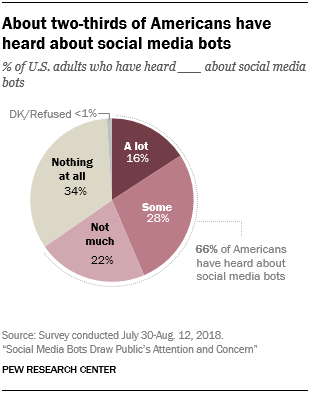 While most Americans have heard about them, the debate about social media bots has not reached all corners of the public at the same rate. 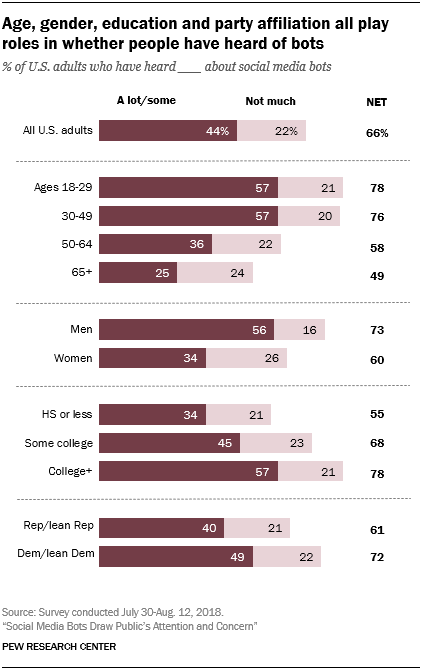 There are also differences in familiarity by education and, to a lesser extent, by party affiliation. About three-quarters of Americans with a college degree (78%) have heard of social media bots, compared with 55% of those with only a high school education. In addition, Democrats and Democratic-leaning independents are more likely than Republicans and Republican-leaning independents to have heard about social media bots (72% vs. 61%, respectively). 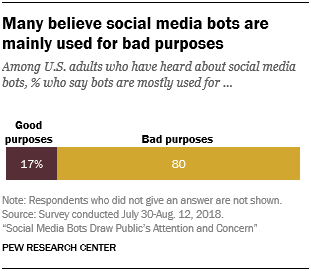 This broad consensus is consistent across demographic groups. For instance, roughly eight-in-ten Republicans and Republican-leaning independents as well as Democrats and Democratic-leaning independents who have heard of bots suspect they are primarily used for malicious purposes (84% and 78%, respectively). Similarly, even though younger people are more likely to have heard of bots, there is broad agreement across age groups about their intended purpose: About eight-in-ten Americans in each age group who have heard about bots believe they are mostly used for malicious purposes. 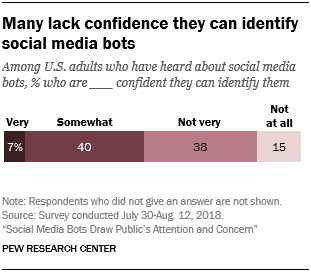 Not only does the public generally have a negative view of social media bots, but few Americans have a lot of confidence in their own ability to detect them. About half of those who have heard of bots (47%) are very or somewhat confident that they can recognize them, and just 7% are very confident. About four-in-ten (38%) are not very confident, and 15% say they are not at all confident. This stands in contrast to the confidence Americans had in their ability to detect made-up news: In a December 2016 survey, 84% of Americans were very or somewhat confident in their ability to recognize made-up news.

Next: 2. Many believe at least some of the news on social media comes from bots and that these accounts have a negative impact on how the public stays informed Next Page → ← Prev Page