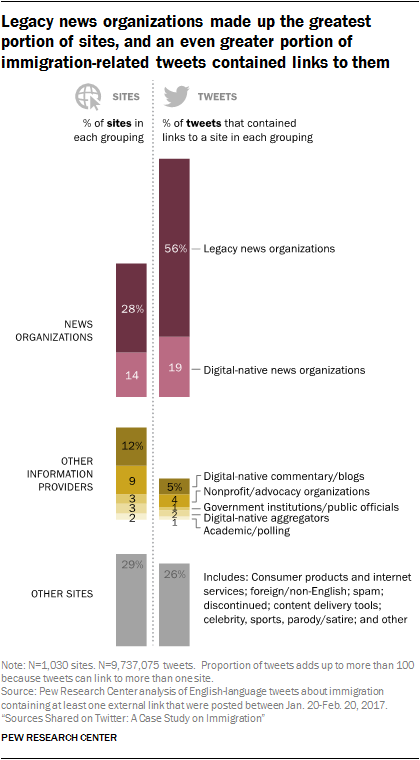 The 1,030 sites linked to most in tweets about immigration can also be viewed through a different lens: the number of tweets that contained a link to each site. In other words, while the main analysis gives all 1,030 sites equal weight, some were linked to by far more than the threshold of 750 tweets, while others were closer to that cutoff. Looking at the frequency of tweets that contained links to each site, then, identifies which sites in this mix – and thereby which groupings and categories – were the most prominent on Twitter in this discussion.

In this analytical lens, the role of News Organizations comes through even more strongly. While these sites accounted for 42% of the 1,030 sites, they appeared in 75% of the 9.7 million tweets with links. Legacy news organizations were responsible for much of this difference. While about three-in-ten sites (28%) were legacy news organizations, a majority of tweets (56%) contained links to these sites. Sites in the Other Information Providers category, on the other hand, had a smaller footprint. And while they made up 29% of sites, just 13% of tweets contained links to any sites in this category.8

Additionally, while just 2% of the 1,030 sites were found on external organizations’ lists of “fake news” websites, the combined proportion of tweets that contained links to them was just 1% – a very small portion of this conversation during the period studied. 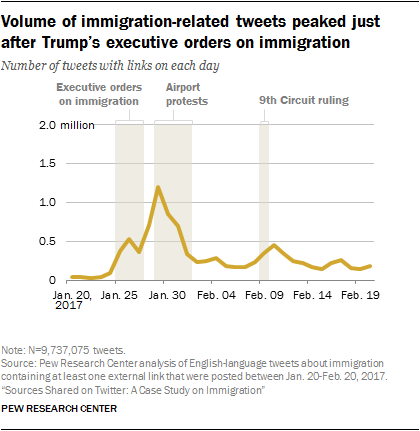 The daily rate of tweets posted about immigration during the period studied often mirrored current events. The highest volume of immigration-related tweets occurred in the days after President Trump signed several executive orders on immigration (particularly the executive order restricted entry to the U.S. by people from certain countries signed on Jan. 27, 2017) when protests took place at airports across the country. Tweets posted during this time (between Jan. 28-31) accounted for 36% of all tweets in this study. Following the protests, Twitter activity returned to lower rates but spiked again from Feb. 9-10, when 8% of all tweets in this study were posted, in the days after the 9th U.S. Circuit Court of Appeals affirmed a lower court’s decision to temporarily enjoin enforcement of the executive order.