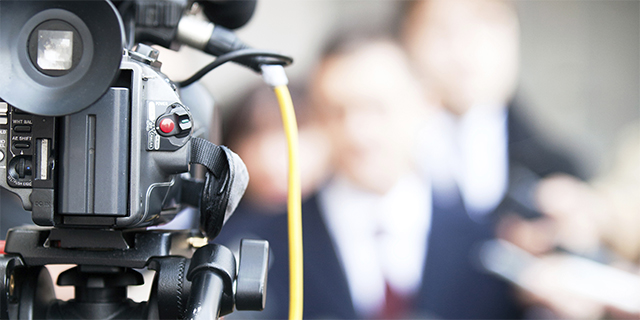 Cord cutters – people who once had a cable or satellite connection but no longer subscribe – are a present reality for the pay TV industry. But even with all the available platform choices, more viewers turned to cable news channels in 2015 than in 2014, causing a ratings bump not seen in several years. Strong advertising and subscriber fee projections, meanwhile, yielded the expectation of continued revenue growth for the cable news networks.

Driven in part by interest in the 2016 presidential campaign, viewership increased for cable news channels in 2015.

In prime time – the premier time slot for advertisers – combined average viewership rose for the three major news channels (CNN, Fox News and MSNBC) by 8% to 3.1 million, according to Pew Research Center analysis of Nielsen Media Research data. The cable viewership increase was largely due to CNN, which experienced an especially sharp uptick, growing its evening viewership 38% to an average of 712,000 viewers. Cable-hosted presidential candidate debates helped drive some of the surge in viewership. Fox remained the evening viewership leader with 1.8 million (up 3% over 2014 levels). MSNBC was down 1% to 579,000.

Daytime viewership grew as well for these three 24-hour news channels in 2015. Between the hours of 6 a.m. and 6 p.m., average viewership for the three channels combined increased 9% to 2 million

The viewership data is presented here for the first time in weighted form, made newly available to Pew Research Center by Nielsen Media Research for the 2007 through 2015. Weighted data better account for the number of programming hours in a given broadcast month though they do not differ substantially from unweighted data (the differences between annual weighted averages and annual monthly averages do not surpass 1.6% across these three cable channels since 2007). While in past years the Center has provided cable viewership data in both average (or mean) and median (the midpoint in a series of data), Nielsen does not make weighted data available in median form.

For the three main news channels combined (Fox News, CNN and MSNBC), total revenues were projected to increase by 10% in 2015, to a total of $4 billion, according to Pew Research Center analysis of SNL Kagan data.

Cable channels draw revenue from two main sources –advertising and subscriber (affiliate) fees, which come out of consumers’ monthly cable bills. Fox News was projected to grow its subscriber fee revenue by 17% to $1.4 billion in 2015 (compared with CNN’s 4% growth to $736 million and MSNBC’s 2% growth to $278 million).

In advertising, CNN was projected to experience the strongest rate of growth at 11% to $377 million (compared with Fox News’ 6% growth to $844 million and MSNBC’s projected growth of 6% to $234 million).

Among the financial news channels that occupy a smaller niche than Fox News, CNN and MSNBC, economic data suggested a similar trend. CNBC, Fox Business Network and Bloomberg TV altogether were projected to have grown revenue by 6% to $1.2 billion in 2015. Individual audience data were not available for these channels.

Al Jazeera America, which was projected to grow its revenue by 17% in 2015, was shut down in April 2016 by its parent company.

In 2015, the three major 24-hour news channels increased their overall newsroom spending by a combined 2%, according to projections by SNL Kagan, to $1.9 billion.

The three major financial networks as well were projected to increase their newsroom spending by 3% to $642 million.

In recent years, the total number of foreign bureaus staffed by the news divisions studied here has declined modestly, from 53 in 2010 to 48 in 2015 – the last year in which complete data were available.

More current numbers for 2016 are available, though incomplete. CNN remains the leader in terms of the sheer number of bureaus it operates around the world and domestically: As of March 2016, the organization listed 31 “editorial operations” internationally and 11 domestically. According to information provided to Pew Research Center, that compares with three foreign and 11 domestic bureaus operated by Fox News. NBC News (whose resources are shared with MSNBC) did not provide updated figures for bureaus in 2016, but as of 2015, the network operated 11 foreign and nine domestic bureaus, in addition to 10 international locations in which it had a presence, but no bureau.

Cable news operations are multiplatform organizations, each with a substantial digital presence of their own. CNN announced in March 2016 that it would begin a “strategic restructuring,” which would lead to investments in areas like mobile product development and a net gain of about 150 staff for CNN Digital. MSNBC and NBC News in late 2015 came under the same digital leadership, part of NBC News Chairman Andy Lack’s strategic integration plan for the two units. Even live TV events, such as presidential debates – which play to cable’s strength as a medium – brought digital players into the mix: In August 2015, Fox News teamed up with Facebook for the first Republican candidate debate.

ComScore data suggest that the cable news web presence is large and increasingly mobile, though visitors still spend more time with these brands on desktop computers.

(For this analysis, Pew Research Center analysts worked directly with comScore to identify and remove from the sample web entities whose traffic shifts over time were the result of inorganic changes in how those entities are measured by comScore, rather than organic changes in audience behaviors.)