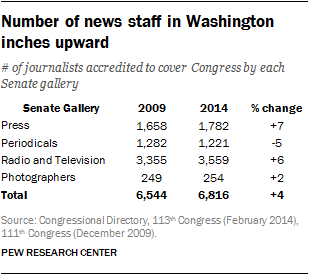 According to data from the four Senate galleries, which accredit journalists to cover Congress, roughly 6,800 news personnel have at least one foot in the Capitol, an increase from a little more than 6,500 in 2009.

These journalists – domestic and foreign – represent a range of news organizations including daily newspapers, wire services, niche outlets (listed in the Press Gallery), magazines (listed in the Periodical Gallery), as well as trade press and broad-interest website startups (listed in both). The Radio and Television Gallery accredits more news personnel than the press and periodicals galleries combined, in large part because their ranks include producers, videographers and photographers in addition to reporters. Finally, photographers – some belonging to news agencies, others to individual publications – are accredited in their own gallery, which is substantially smaller in number than the others.

Whether a publication fits in one gallery or another is influenced by both the gallery’s criteria and a news publisher’s request. In addition, there may well be some non-local reporters or organizations in Washington who cover federal government events without access to restricted press areas. But these numbers do capture the officially accredited mix of individuals reporting about government activity day to day.

Most of this analysis draws upon the Press Gallery figures, where the bulk of daily reporting about Washington occurs on behalf of local communities, most often through daily newspapers. The Press Gallery, in addition, offers in some ways the best view into the most dramatic changes in the Washington press corps in recent years, with declines in daily print newspaper staff and growth in niche outlets and digital sites.

Next: 3. The further rise of niche and digital media Next Page → ← Prev Page