A Growing, if Uncertain, Part of News

Momentum around digital news video picked up in 2013.

More than six in ten U.S. adults now watch videos online – and roughly half of those, 36% of all U.S. adults, watch news videos, according to new Pew Research Center survey data. This is roughly the same percentage of Americans who now get news from Facebook or watch cable news channels regularly.1 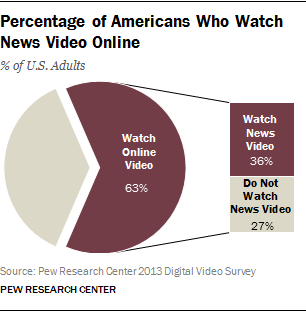 And, while no firms break out digital video advertising revenue specifically for news, the category of digital advertising as a whole is up sharply, growing 44% from 2012 to 2013, to an estimated $4.15 billion, according to eMarketer.

Technological improvements lowering the barrier to entry, both for the audience and those in the news business, have spurred a wave of new entrants into the digital news video space. With 36% of U.S. adults recording videos on their cellphones, citizens are playing a valuable role in the news process, sharing videos of eyewitness moments around news events small and large. And both digital news outlets like Vice Media as well as legacy outlets like NBC took steps to develop approaches to digital video content in 2013.

But a closer look suggests that digital news video does not necessarily have a clear or simple path to becoming a major form of news in the future. Producing high-quality video – or even streaming it live – can be costly, and the payoff is not clear. Video advertising, while on the rise, amounts to just 10% of all digital ad revenue and just 2% of total ad revenue. Large distributors of video content like YouTube already account for a large portion of video watching on the web, and a hefty share of the revenue. And for traditional legacy providers – local TV stations and national networks – most of their audience and revenue are still in the legacy platforms, which may reduce these companies’ desire to invest in digital video in a big way. Non-digital news revenue on local and national broadcasts, as well as cable, now amounts to $16 billion a year.

On the consumer side, while television viewing has been the most popular form of news consumption for decades, it is still not clear how much that will translate to high levels of video-based news online. The growth rate has slowed considerably since 2007 (the year after YouTube was purchased by Google and the year the iPhone was released). From 2007 to 2009 the percentage of adults watching online news video increased 27%, but the next four years (2009 to 2013) saw just 9% growth. It is true that mobile devices are accounting for a larger share of video viewing, which could bring another spike in growth, but at the moment that increase remains only a hypothetical.

This report examines the state of digital video – from the audience, to the revenue, to developments in content creation from both citizens and news organizations. It includes original survey data and a new audit of 32 local television news sites, as well as aggregation and analysis of a host of outside data.

Over all, it finds that online video is clearly becoming a part of the news media landscape. News is a part of what people watch online, and, more than ever, the public is a part of creating this news. But online video is also very much still in development, and the revenue opportunities, while they exist, are complicated. Some who have moved most powerfully into this space are digital natives, not tethered to legacy platforms that still account for a good portion of their audience and revenue.

Next: The Audience for Digital News Videos Next Page → ← Prev Page