This pattern is true for reported stories and for editorials and commentary. For reporting, 47% featured mainly support, while 8% featured opposition and 45% were mixed or neutral. Similarly, nearly half (48%) of opinion pieces, including newspaper op-eds and editorials as well as cable and talk radio commentary, were clearly in support, compared to 10% that opposed and 43% that were neutral. 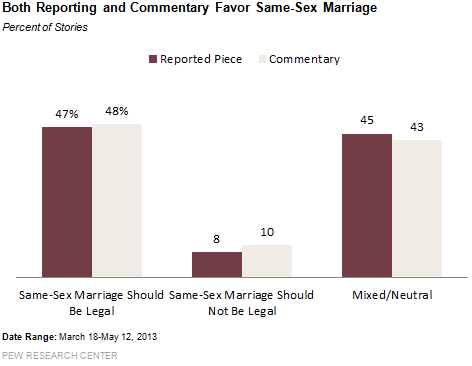 Many of the news stories identified as supportive of same-sex marriage focused on evidence that it was gaining more acceptance. For example, a March 19 edition of the PBS NewsHour included a three-minute edited package that discussed polls showing increased acceptance across all demographics. The same show also featured a longer piece that discussed the endorsements of same-sex marriage from people such as President Obama and Senator Rob Portman, and how younger people were at the forefront of changes in public opinion.

Many of the stories that featured more statements of opposition included profiles of individuals or groups, and the reasons behind their views. For example, a March 20 story on Politico quoted Republican National Committee Chair Reince Priebus as he reiterated his party’s opposition to same-sex marriage, while also calling for greater tolerance. The rest of the story discussed how the GOP would handle differences of opinion within the party.

The commentary pieces offered personal expressions of support or opposition. For example, Mary Meeks, an Orlando civil rights and constitutional law attorney, wrote a guest column in the April 12 Orlando Sentinel. "I am hopeful that the court will honor the equal protection guarantee of the 14th Amendment to our Constitution by invalidating blatantly discriminatory laws that deny gay Americans the fundamental right to marry," she wrote.

And in his March 26 program, conservative talk radio host Rush Limbaugh expressed the hope that the Supreme Court would not legalize same-sex marriage. "Do you realize how stupid this is?" he asked. "The problem is that nine exalted lawyers are determining something that has been a tradition since the beginning of time…the Left is forcing their agenda on us, pure and simple."

Next: Arguments in the News Coverage Next Page → ← Prev Page