After helping define the Obama presidency for almost a year, health care reform largely disappeared as a subject in the American news media as it wended its way through the legal system to the Supreme Court.

When it was a major story, however, most of the coverage focused on the politics of the bill rather than the substance of the legislation. And the language and framing of the issue favored by the bill’s Republican critics was far more prevalent in the news coverage than the language and framing favored by Democrats supporting the bill, according to research conducted by the Pew Research Center’s Project for Excellence in Journalism.

Health care reached its heights as a news story in the summer of 2009 and early 2010, during the rise of the tea party and the battles in the House and Senate over passage of the legislation. In the third quarter of 2009, with passions fueled by angry town hall meetings, coverage of the health care debate filled 18% of the newshole, according to PEJ’s News Coverage Index, making it the No. 1 story in the news. That number fell slightly but remained high in the last quarter of 2009 (13%) and the first quarter of 2010 (14%). 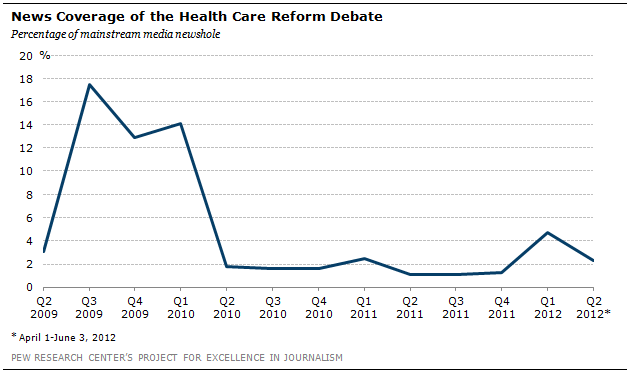 But once the battle over health care shifted to the courts, largely in federal appeals court decisions, the subject received far less attention. From April 2010 through December 2011,  the subject never exceeded 2% of the overall newshole in any three months period.

That changed, some, in the first three months of 2012, with coverage rising to 5% of the newshole. The week of February 6-12, the story first made a comeback (9% of the newshole) as the debate over whether religious institutions should be forced to cover contraception in their health insurance plans emerged as a major issue. Four weeks later, Rush Limbaugh’s controversial comments about a Georgetown law student helped drive coverage (10%) the week of March 5-11.

At its peak, in 2009 and early 2010, the issue was also more of a topic in the opinion part of the media culture, on radio and cable TV talk shows, than elsewhere. But it wasn’t always Obama’s partisan opponents doing the talking, but often people from within the liberal camp who felt the law didn’t go far enough. During that period, liberal talk show hosts devoted more time to the issue than conservative hosts. 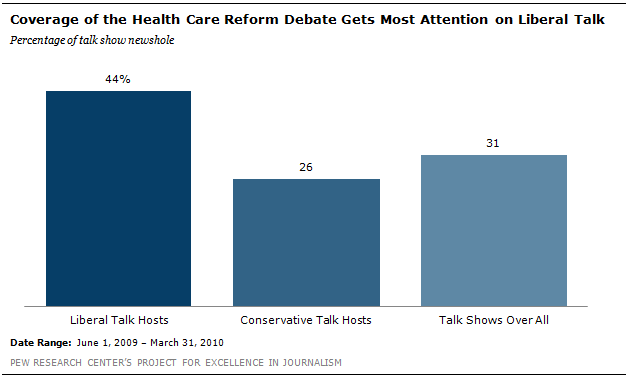 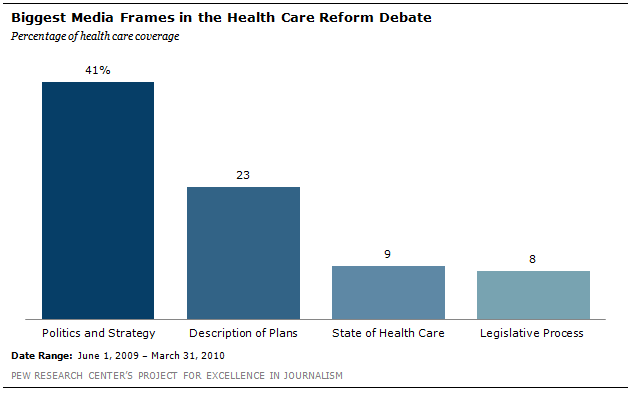 Which side got the better of this highly politically oriented coverage? An analysis by PEJ of the language used in the media (PEJ research) reveals that opponents of the reform won the so-called “messaging war” in the coverage. Terms that were closely associated with opposition arguments, such as “government run,” were far more present in media reports than terms associated with arguments supporting the bill, such as “pre-existing conditions.” 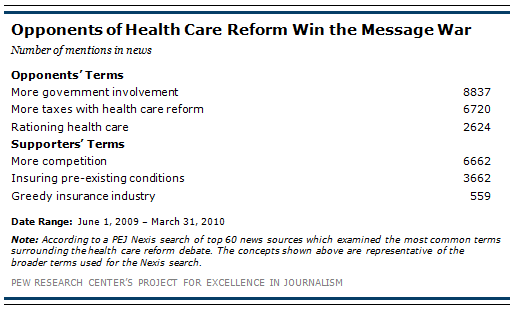 How important is health care to Obama’s presidency? Of all the stories in which Obama has been a lead newsmaker (meaning at least 50% of the story referenced him), the health care debate is the No. 3 topic during his first year in office. Fully 13% of these stories were about health care, substantially more than about the war in Afghanistan. Only the economy (the subject of 18% of Obama stories) and stories that focus directly on the operations of the Administration were larger. 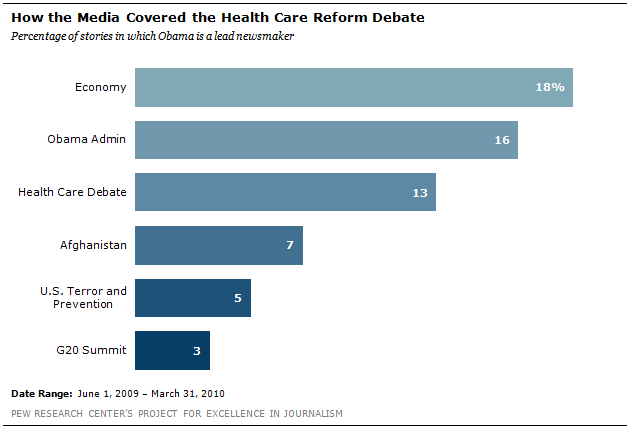