How a Pop Tune Became the Hottest Social Media Meme

It’s not often that a catchy pop song and speeches from President Obama fit together, but in the world of internet memes and viral videos, the two have collided to create a social media sensation.

A video produced by a 19-year-old sophomore at the University of Tennessee mashed together snippets from Obama speeches to make it seem as if he is singing the hit song “Call Me Maybe.” In five days’ time, it generated almost 8 million views on YouTube-making it the most-watched YouTube news video last week. It was also the week’s No. 2 topic on Twitter, according to the New Media Index from the Pew Research Center’s Project for Excellence in Journalism.

The video, which lasts less than two minutes, is the latest illustration of the phenomenon of the internet “meme,” a message or idea that spreads rapidly via the web and often becomes a popular cultural touchstone. And in this case, it also shows how with improved technology the thread of a meme develops. There are now thousands of different spin-offs of the “Call Me Maybe” dance hit featuring everyone from former Secretary of State Colin Powell to the Harvard baseball team doing their version of the catchy tune.

The massive appeal of this meme has even led a number of organizations from Major League Baseball to the Miss USA Pageant to join the “Call Me Maybe” craze as a way to advertise their own products.

The Roots of the Obama “Call Me Maybe” Video

Fadi Saleh, the 19-year-old creator of the Obama “Call Me Maybe” video, has a YouTube channel called baracksdubs. Prior to the “Call me Maybe” video, Saleh produced and posted three other videos with Obama appearing to sing popular songs.

Improvements in bandwidth and the proliferation of sites such as YouTube that maintain videos make it far easier to collect and assemble music and footage from online sources. Saleh was not the first to offer a lip-sync version of this song.

“Call Me Maybe,” by Canadian artist Carly Rae Jepsen was released in 2011. The song’s popularity took off when the meme began in January 2012. Justin Bieber and several of his friends posted a video of themselves lip-syncing the song on an airplane. That week, the video was the third-largest linked-to subject on Twitter, according to PEJ’s New Media Index.

In February, the meme grew dramatically as Bieber and two other teen celebrities, Selena Gomez and Ashley Tisdale, posted another lip-sync video that was much more professionally produced. That piece generated 39 million YouTube views in three months and sparked thousands of other covers and lip-sync videos. Currently, there are more than 28,000 YouTube search results for the keywords “Call Me Maybe.” On June 13, the song became the No. 1 hit on the Billboard Hot 100.

The range of groups that have made their own “Call Me Maybe” videos is extensive. A version made by members of the Harvard baseball team while riding in a van has received more than 12 million views since it was posted in early May.

Last week, a version featuring 4 Major League Baseball draft prospects holding up signs displaying their statistics was linked-to by thousands of Twitter users and was used to publicize the MLB draft and the sport’s website. The Miss USA Pageant produced a version featuring contestants and the pageant’s owner, Donald Trump, to advertise the June 3 broadcast of the event on NBC. Another video featuring the Miami Dolphin cheerleaders was viewed more than 4 million times.

A number of people went even further by creating their own rendition of the song. The reporters of National Public Radio, for example, produced a dramatic reading of the lyrics. And a version of the song featuring Jepsen herself along with Jimmy Fallon and the band The Roots playing classroom instruments became a smash hit as well as an advertisement for Fallon’s late night talk show on NBC.

Even former Secretary of State Colin Powell joined in the fun. Following a June 13 interview on CBS This Morning, Powell and program co-host Gayle King were caught cheerfully singing the chorus after the show went to commercial. CBS News then posted the 20-second clip on its website.

While Jepsen’s song is copyrighted, it seems clear that she and her record company do not object to this use of it by other people, especially as it likely propelled her career forward.

Saleh, who is studying medicine at the University of Tennessee, has become a celebrity himself and says he plans to do future videos with speeches from GOP candidate Mitt Romney. When asked if he had a political motivation to it, Saleh told a local television station in Knoxville, “This is entertainment. It’s not intentional to have just one opinion. I don’t have a political opinion in it.”

The viral meme is not a new online phenomenon. For more than 15 years, internet users have passed along videos that have become cultural reference points. In 1996, for example, an animated video of a dancing baby become one of the first such internet memes and made its way onto a number of television shows including Ally McBeal.

In recent years, however, memes have become more common because technological advancements have allowed for more people to participate. At the same time, a number of organizations are now thinking creatively about how to use a popular concept to their advantage.

In December 2005, Andy Samberg and Chris Parnell of Saturday Night Live created a comedic song and video named “Lazy Sunday” that featured the two rapping about subjects such as cupcakes and the movie The Chronicles of Narnia. The song first appeared on SNL and became a huge hit on YouTube soon after-receiving more than 7 million views.

The rapid success of Lazy Sunday led to significant business moves. In January 2006, Apple announced it would sell some SNL skits through its iTunes store. After YouTube was purchased by Google in 2008 for $1.65 billion, some analysts theorized that the success of “Lazy Sunday” was a significant contributor to the growth of the video-sharing site. (NBC has since pulled the song from YouTube after the popularity peaked, but the clip is available on other sites such as Hulu.)

The cultural impact was clear as the song inspired a whole host of responses. A different set of comedians quickly produced Lazy Monday, a West coast answer to the original. Numerous other replies included Lazy Muncie, a defense of Indiana, and Lazy Ramadi, a video made by soldiers stationed in Iraq. These videos contained original lyrics and music.

Countless other internet memes and viral videos have followed. In August 2006, a scene from the movie Downfall, which chronicled the last 10 days of Adolf Hitler’s life, became an online meme. The original scene details Hitler’s enraged reaction to news of a major military setback.

Many people created their own versions, changing the subtitles of the four-minute video to make it appear as if Hitler was furious at more trivial matters, such as an inability to access his Twitter account or Kanye West’s behavior at the 2009 Video Music Awards.

The producers of the original film, Constantin Film, did not like the idea of the clip being used for such purposes. In April 2010, the company ordered YouTube to take down all versions on copyright grounds. However, thousands of parodies remained on other sites and the popularity of the meme grew. By October 2010, Constantin Film put an end to its YouTube blockade. Currently, YouTube has its own channel entitled Hitler Rants Parodies which has received more than 32 million views. And according to users on the Downfall Parodies Forum, the film company has even moved to place advertisements on some of the parodies.

Many groups have gone to great lengths to contribute to other internet memes. In 2007, there was a video of thousands of prisoners in the Philippines reenacting the complicated choreography from Michael Jackson’s Thriller video. Flash mobs from Denver to Dubai have taken the idea and added to it, while a number of college groups have performed their own version of the Thriller dance.

A memorable wedding procession from 2009 known as “JK Wedding Entrance Dance” has been viewed more than 75 million times and has spawned numerous other elaborate videos such as wedding proposals and choreographed dances at receptions. The video was even parodied on the NBC sitcom The Office.

The top story on blogs last week was Search Engine Optimization, making it the second week in a row 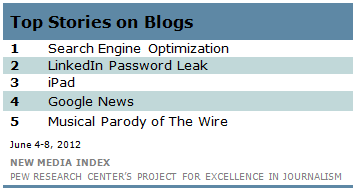 that it was No. 1, and marking the fifth time in the past six weeks it has been among the top five stories in blogs. Bloggers linked to a post with strategies to improve marking for online links, and a site that advises people how to use complex analytics to measure their success.

The second story on blogs involved a major leak of passwords from the large professional networking site LinkedIn. A file containing what appeared to be 6.5 million passwords appeared online last week, likely coming from hackers who broke into the site’s network. Most of the attention on social media involved the  responses from LinkedIn, which included steps the company was taking to help those whose passwords had been compromised. Bloggers were also interested in finding tools to discover if their particular accounts had been affected.

News that Apple is going to take its artificial-intelligence system-known as Siri-to iPads was the second biggest topic. Siri has become popular due to its use in iPhones and its easy-to-use voice commands.

Multiple acquisitions by Google of other tech companies combined to be the fourth subject. Google bought , a company that makes an office software suite for users of smartphones and tablets, and Meebo, a social media platform that among other things, lets users instant message on a variety of websites. (A week after the purchase, Meebo announced that most of its products would be shut down as their staff switched to focus on improving Google’s social media services.)

And a parody video on the comedy site Funny or Die was the fifth largest subject. The four-minute clip imagines a musical version of the critically acclaimed TV series The Wire, and stars several members of the original cast. The video pokes fun at the notion of turning The Wire, known for its gritty portrayal of the drug culture in Baltimore, into a light-hearted musical. 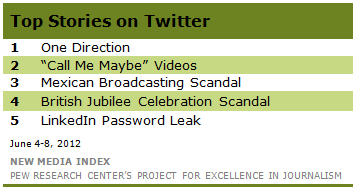 Videos featuring the popular boy band One Direction in recent concerts in Mexico were the most linked-to subject on Twitter last week.

Two international scandals reported by the British newspaper the Guardian made the list. At No. 3 was an article reporting about uncovered computer files which supposedly show that Mexico’s biggest television station had sold favorable news coverage to prominent politicians. And a report that busloads of unemployed people were brought in and made to work without pay as part of the recent diamond jubilee celebrations in London, was No. 4.

And the LinkedIn password leak was the fifth largest story.