The online world buzzed last week over what could be a major technological breakthrough in personal devices.

On April 4, Google released a video previewing its planned augmented-reality glasses, or “Project Glass.” In the video, an unidentified user starts his day by checking his schedule and monitoring the weather by looking in the glasses. The glasses also inform him of a subway delay, provide walking directions to his destination, and help him with other small tasks that would currently be done through a smartphone. The man ends his day playing the ukulele for a lady friend who he is chatting with through the glasses.

The reaction online was both instantaneous and voluminous. Project Glass became the top story on blogs for the week of April 2-6 and the No. 2 story on Twitter according to the New Media Index from the Pew Research Center’s Project for Excellence in Journalism. But there were some differences in how bloggers and Twitter users responded.

While tech bloggers were largely impressed by the potential of the device, they tempered that excitement with some concern about whether the glasses would work as well as advertised. (Google has not announced a release date for the product.) Twitter users seemed more unabashedly enthusiastic about the technology, sharing jokes and videos about Project Glass.

For many bloggers, the new device was seen as a potential game changer.

“This could be a massive hit among a global tech-savvy gen-y audience. A relevant piece of art, not just a gadget. A disrupting force that could fuel the Google brand, as well as a brand new business model,” declared Igor Beuker at Viral Blog.

“The smartphone has become our gateway into digital social networking: any disconnect between it and the real-world arguably comes about because the method of delivery is inefficient. Google’s concept of bouncing icons and pop-up dialog bubbles may not address that entirely, but if the recent avalanche of smartphones and mobile apps is anything to go by, put hardware into developers’ hands and – no matter how rudimentary – the software will swiftly progress…science-fiction becoming science fact,” wrote Chris Davies at Slash Gear, quoting Steve Mann, a pioneer of the technology.

Some bloggers however, leavened their excitement with skepticism about the device and its implications.

“No offense to the glasses wearers out there, but I’ve worked my whole life to not wear glasses,” wrote Chris Spags at Guyism. “Pounding carrots, pretending I meant to walk into a particular wall. So sorry, Project Glass, but I’m not exactly dying for your invasive and nerdy solution. Take that, billion dollar company with brilliant ideas.”

“[I]t’s also slightly scary for anyone concerned about the prying eyes of government surveillance,” cautioned Peter Suderman at Reason.”

One element of the bloggers’ wariness about project seemed to be a suspicion of Google’s corporate motives.

“There is nothing inherently wrong with the world Google imagines: checking in at a coffee shop, texting with friends or video chatting with a partner,” wrote Navneet Alang for The Atlantic, “In as much as digital can place these in front of us, this is good. But Google has always had its own ends for how it has organized information, and other companies do too.”

“Project Glass might well, in the future, prove to be more than a little amusement. We might all be wearing these things and even learning how not to barge into each other on Fifth Avenue. Currently, though, Google’s putting this out there to make you like the company more,” wrote Chris Matyszczyk at CNET.

On Twitter, there was less of the skepticism seen in the blogosphere about Project Glass, with users sharing their thoughts on the project, jokes about the glasses, as well as video parodies of Google’s original announcement.

“Google is working on an augmented reality project that melds your phone, your glasses and your brain. #jawdropping” wrote Terry Vandrovec.

Some made cracks about Google and the device.

And at least one user made light of the fact that the man in Google’s video was using Google+, the company’s relatively unpopular social network.

“Most unrealistic part of Google’s vision for augmented reality glasses is that someone in the future would use Google+,” said Eric Fenstermaker.

The Rest of the Week on Blogs

News about another tech giant was the No. 2 story on blogs last week. Some of Apple’s iPad 3 devices were reportedly not easily connecting to WiFi signals. Leaked documents published by the website 9 to 5 Mac, indicate that Apple has decided to replace the affected units and is investigating the issue. 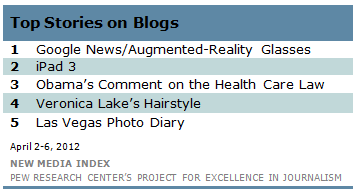 Bloggers largely shared this data, informing their community of readers that there was a problem and directing them to the 9 to 5 Mac article that included the Apple documents.

“If you’re having problems getting your brand new iPad to connect to Wi-Fi, you aren’t alone. Speak up! Let AppleCare know and Apple will replace your unit,” advised Emily at PadGadget.

A politically-tinged debate surrounding the Supreme Court’s pending decision on the Obama Administration’s health care law was the third-biggest story in the blogosphere last week. The reaction was to the president’s comment that a decision against the measure would represent, “an unprecedented, extraordinary step of overturning a law that was passed by a strong majority of a democratically elected Congress.”

The blogosphere responded quickly, with many critical of the president.

“Obama’s news conference reply seemed stunningly ignorant for a lawyer, someone who’s touted his credentials as a constitutional law professor at the University of Chicago,” wrote Andrew Malcom at Investor’s Business Daily.

“It is a sad comment on the present state of politics in America that the Republicans are only interested in seeing Obama-care collapse,” countered Nomad at Nomadic Politics.

News from the fashion world completed the list of the top five news topics on blogs last week. The No. 4 story was an article on how to style your hair like 1940s movie actress Veronica Lake that was recently shared by Dana Oliver at Styleist. That was followed, at No. 5, by a photo diary from fashion blogger Bryan Boy of his birthday trip to Las Vegas. 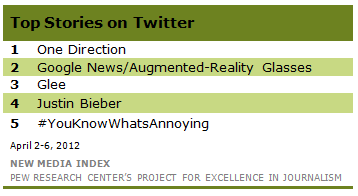 As is often the case, pop culture icons were a hot topic on Twitter last week.

The No. 1 subject was the Irish-British band One Direction, which is a recurring top story. Last week, the band was on Saturday Night Live, a sign of its growing celebrity in the U.S.  And it has already been one of the top five subjects on Twitter six times in 2012.

Popular tweets from the group included one from band member Harry Styles, asking his fans if they would judge him for wearing a pair of sunglasses that he dropped in the toilet and a photo of the group with last week’s Saturday Night Live host, Sophía Vergara.

In third place were some tweets about the Fox show, Glee. One was a photo of several of the show’s cast members, tweeted by star Lea Michele and the other was a video clip of a song from an upcoming episode, featuring the popular song “Somebody That I Used to Know.”

In fourth place was a quick clip of teen heartthrob Justin Bieber plugging his new album on iTunes.

And the No. 5 story on Twitter was a rage comic of a manicure gone wrong with the hash tag #YouKnowWhatsAnnoying.

The top video on YouTube for the week was a practical joke played on a major presidential candidate while he was campaigning in Wisconsin. In the video, Governor Mitt Romney walks into a ballroom that he is expecting to be full of supporters enjoying a pancake brunch. With great fanfare, Congressman Paul Ryan announces Romney as “the next president of the United States!” as the governor walks into the room with Senator Ron Johnson.

Except, when Romney enters the room, he notices that there are only a handful of staffers in the ballroom. “Happy April Fools!” a staffer yells. “This really is a small crowd,” Romney responds, in good spirits about the prank, “You guys are really bad.”