Breitbart Remembered Fondly by Most on Social Media

Conservative blogger and activist Andrew Breitbart had many supporters and perhaps as many critics during his career. When he died suddenly on March 1 at the age of 43, however, the online response consisted of far more 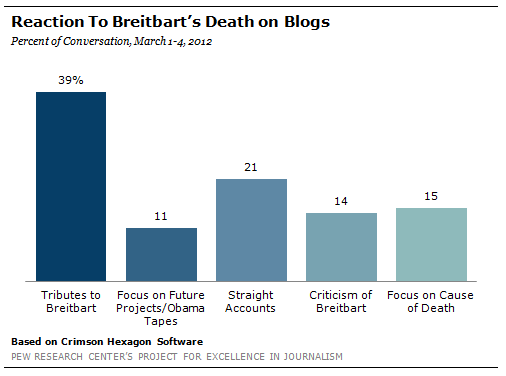 Breitbart himself used the new media landscape to spread his brand of combative conservatism, creating sites such as Big Government and Big Journalism and maintaining a very active Twitter presence. He was perhaps best known for his role in two controversies-posting the lewd tweeted photos that led to the resignation of Congressman Anthony Weiner and publishing misleadingly edited remarks by a black USDA worker that led to her departure.

From February 27-March 2, Breitbart’s passing was the No. 5 subject on blogs, according to the New Media Index from the Pew Research Center’s Project for Excellence in Journalism. (Since his death occurred late in the week, that ranking is not fully indicative of the interest online.) To further gauge the social media reaction, PEJ used computer technology from the media monitoring firm Crimson Hexagon to identify the tone and themes of the conversation about Breitbart on both Twitter and blogs from March 1-March 4.

The key finding was that the tributes to Breitbart outnumbered the criticism by a rate of almost 3-1 on blogs and almost 2-1 on Twitter. And a significant chunk of the online conversation was devoted to speculation about whether Breitbart-widely reported to have died of natural causes-might have been a victim of foul play. 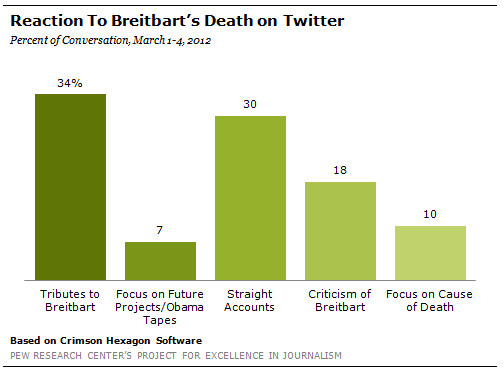 ss, referring to him as the leader of a war against the institutional left. Many talked about continuing his work after his death. While not as prominent, much of the reaction from liberals was harshly critical of the man and his methods.

The reaction differed little on the two social media platforms.

In the blogosphere, half the commentary was made up of either tributes to Breitbart (at 39%) or positive speculation about the work Breitbart had been planning (at 11%), with most of that  relating to his promised exposes of President Obama’s years as a student at Harvard. That was more than three times the amount of discussion, 14%, that was critical of his career and life.

On Twitter, 41% of the commentary expressed fondness for Breitbart (34% tributes and 7% regarding future plans) while 18% was negative.

On both forms of social media, a conspiracy theory entered the conversation that focused on the cause of Breitbart’s death (15% on blogs and 10% on Twitter). Some commenters wondered whether he died of natural causes, or whether he was murdered by political enemies. In particular, some connected the planned release of the Obama Harvard tapes to the timing of his passing.

On the morning of March 1, Breitbart’s website, Bigjournalism.com, announced his death. The controversial blogger and activist died after collapsing during a walk near his Los Angeles home shortly after midnight.

As the news was reported by various news outlets and spread on Twitter, supporters expressed their sympathy.

“I just confirmed with someone close to him that social media entrepreneur and conservative warrior Andrew Breitbart has passed away,” wrote blogger Michelle Malkin. “I’m stunned. He was kinetic, brash, relentless, full of fight, the bane of the Left, and a mentor to the next generation of right-wing activists and citizen journalists.”

“wow Andrew Breitbart dead at age 43~Conservative icon! He was one of my heroes due to his courage,” tweeted craigfear.

“Andrew Breitbart was a great guy and helped the Tea Party and bloggers of all stripes out tremendously,” agreed stix1972.

“I met Andrew briefly last year at a meet and greet up in Orange County, CA,” wrote Left Coast Rebel. “My friend Donald Douglas and I were amazed at the guy’s energy and zeal for fighting the good fight….”*

Many like-minded activists took the news as a call to continue his political work.

“Breitbart showed us how to stand up to the malfeasance of the progressive movement. When evil appears, we can unite as a people to withstand the tsunami of hate,” declared Joseph Hall at The Lonely Conservative.

“Some people on the left may think that the devastating loss of Andrew Breitbart has broken the spirit of the conservative new media. In fact, I think the effect has been the opposite,” suggested American Glob. “I can’t speak for everyone but while I’m incredibly sad about the loss of Andrew, I feel energized and determined.”

“Get involved in a tea party group, or a political group, but get active. Andrew would have wanted that,” implored Kevin DuJuan at Hillbuzz.

Some supporters focused on the project that Breitbart had been working on prior to his passing-releasing videos of Obama from his days at Harvard that supposedly showed the President as a radical proponent of class warfare and racial division. According to some reports, Breitbart was set to release the tapes beginning on the day he died.

(Steve Bannon, a filmmaker and friend of Breitbart, told talk-show host Sean Hannity that the tapes and information would be released despite Breitbart’s passing. On March 5, the first report of such information was published on Biggovernment.com in an article that claimed in 1998, Obama attended a Chicago play called The Love Song of Saul Alinsky and participated in a subsequent panel discussion. On March 7, Biggovernment issued a second report that featured footage of Obama praising Harvard Professor Derrick Bell in 1990, who they called a “racialist” figure. While the site claimed the footage had never been seen before, PBS issued a statement that the same video was shown in 2008 as part of a FRONTLINE special on Obama.)

More than a few people connected the timing of Breitbart’s death with the release of Obama information and suspected that his passing may not have been of natural causes.

“Andrew Breitbart died of natural causes? Or was he taken out?” asked Miguel Cerda Jr. on Twitter. “I’m not a fan of conservatives but his death is REALLY suspicious hmmm…”

“I, too, feel he was murdered,” read a comment from Tracie at WorldNetDaily. “I TRULY believe with all my heart, that the Obama administration will do WHATEVER is necessary to get him re-elected…even if it means shutting someone up, permanently!”

“Andrew Breitbart just died of ‘natural causes’ ??? He must have been about to break something BIG against the establishment. Try killed him,” tweeted dasilvalaw.

While Breitbart’s fans led the conversation online, some on the other side of the ideological divide pulled no punches in expressing their dislike for the man.

“Breitbart made sport out of others adversity, playing like a third rate roller derby hack revered only by white trash who dont know better,” tweeted JaneQPublic.

Some bloggers justified their harsh responses by pointing to comments Breitbart made in 2009 immediately following the death of Senator Ted Kennedy. At the time, Breitbart wrote that “Kennedy was a special pile of human excrement” and “I’m more than willing to go off decorum to ensure THIS MAN [Kennedy] is not beatified…Sorry, he destroyed lives. And he knew it.”

“Why is it that I should have any compassion for a man whose very existence in public life was nothing but the height of vileness?” wondered Broadway Carl. “He walked the earth with the sole purpose of pushing his political ideology not by extolling the virtues on his own party, but by vilifying the opposition though lies and deceit.”

“Good riddance,” shared bluzdude at Darwinfish 2. “OK, I don’t really wish death on anyone, but I won’t spend any time mourning the passing of this shyster.”

At least one critic, however, decided to use a different tactic.

“And following my grandmothers advice, I have nothing to say,” posted Jon at A Lie a Day.

Elsewhere on blogs last week, the other leading subjects all involved technology and smart devices. 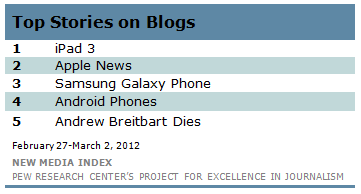 The No. 1 topic involved rumors and news about Apple’s soon to-be-released iPad 3. (The new model will be available on March 16.) Bloggers followed every morsel of information they could find on the device, including speculation about the cost and a picture of a plane that might have been carrying shipments of the new iPads from China to the U.S.

A variety of news related to other Apple products finished second. Some bloggers highlighted a post on the NewYork Times technology blog suggesting that some applications on Apple devices were taking people’s address books and pictures without their permission. Others focused on news that Apple purchased an app search and discovery platform known as Chomp.

And a post on Google’s blog about the rapid expansion of the use of Android phones, with a year-on-year growth rate of more than 250%, was No. 4. 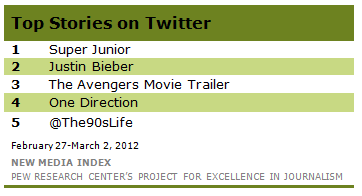 Tweets from the “boy bands” Super Junior and One Direction were two of the top five most linked-to subjects. This marks the eighth time in 2012 that at least one of those international super-groups was among the top subjects on Twitter.

The phenomenon of international music groups using social media to win American fans received mainstream news attention as the New York Times published an article about the growing popularity of Korean singers, including the group One Direction.

Tweets from pop star Justin Bieber were the No. 2 subject last week while the trailer for the upcoming movie, Marvel’s The Avengers, finished third.

And tweets from the account @The90sLife featuring a movie and popular snack from the decade of the 1990s were the fifth subject.

The buildup to the March 4 Russian presidential election has been popular on YouTube during the past few months. Last week was the third time in the past five weeks that clips focusing on Russia dominated the most viewed news videos.

Last week’s No. 2 video was footage from the February 28 television debate between candidates Vladimir Zhirinovsky and Mikhail Prokhorov.

The debate grew tense when singer Alla Pugacheva, a Prokhorov supporter, questioned Zhirinovsky’s public attitude and called him “a disgrace.” Zhirinovsky, the leader of the right-wing nationalist Liberal Democratic Party of Russia (LDPR) who is well known for strong rhetoric, responded to Pugacheva by saying, “You artists, like prostitutes, lie underneath any leader for money. You all lay under Brezhnev, under Gorbachev, under Yeltsin, under Putin. Tomorrow, I will enter the Kremlin, you will all lie under me and I will spit on you and wipe my feet on you.” (The translation is courtesy of the New York Times.)

The No. 5 video last week featured the same hour-long February 28 television presidential debate in its entirety.

This special edition of PEJ’s New Media Index utilizes computer technology from the media monitoring firm Crimson Hexagon. Based on an examination of more than 6,000 blog posts and 200,000 tweets, this report goes beyond the normal methodology of PEJ’s index to look at the tone of conversation related to the Andrew Breitbart’s passing.

Crimson Hexagon is a software platform that identifies statistical patterns in words used in online texts. Researchers enter key terms using Boolean search logic so the software can identify relevant material to analyze. PEJ draws its analysis samples from several million blogs. Then a researcher trains the software to classify documents using examples from those collected posts. Finally, the software classifies the rest of the online content according to the patterns derived during the training.

PEJ used the keyword “Breitbart” in a Boolean search to narrow the universe to relevant posts.