The second biggest category of advertising online was one that played a fairly small role for news in legacy platforms, the financial industry. Ads for financial products or services accounted for 18% of all Web ads captured, more than triple that of the next biggest category, toiletries and cosmetics (5%). And on more than half of the sites, 12 out of 22, financial ads ranked first-above self-promotion. 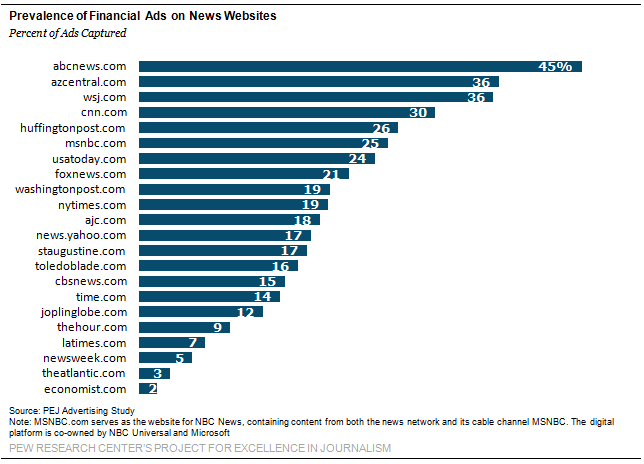 Abcnews.com carried the greatest proportion of financial ads, 44.6%. Economist.com carried the smallest (1.8%). Most of these financial ads were for products or services related to debt management (credit cards, consumer loans) rather than for financial savings like investments and retail banking.

These numbers stand in contrast with the small role financial advertising plays in most of the legacy platforms studied. Only magazines contained more financial industry advertising in their original platform than online. The difference was most dramatic for cable TV outlets. Online, more than a quarter of the ads studied (26%) came from the financial category (making it the largest one). On cable news television, financial advertising was 9% (and ranked fifth).[1] 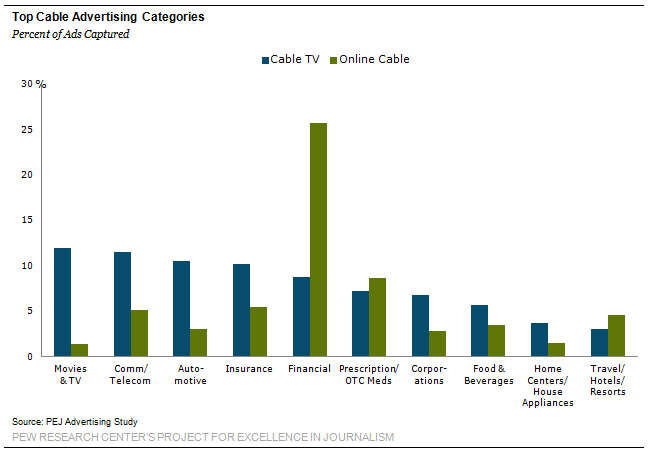 Movies and entertainment, telecom, cars and insurance were all bigger.

Similar differences emerge in the Web versus legacy domains of the other news genres.

In print newspapers, clothing and accessories was the top category (at 17%) but ranked 18th on newspaper websites (at only 2%).  Close behind in print were house appliances (12% of the ads), which online accounted for just 2%.

Financial ads ranked second both on the websites and in the print publications. Online, though, they accounted for a greater percentage of the ads (17.1% versus 12.8%) and represented a wide range of financial products, from home loans to credit cards to free checking accounts.  And first on the websites were the papers’ own ads. 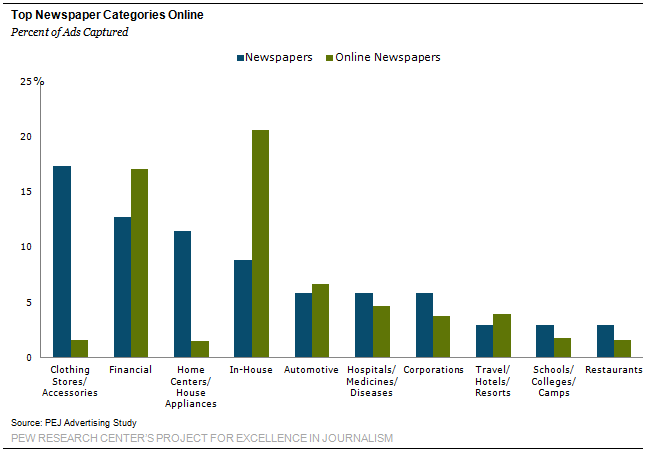 When it came to network TV news, the heavy presence of the prescription drug industry on broadcast did not carry over to the Web. This industry accounted for 16% of the ads on network morning and evening news programs, but just half that on the Web. (MSNBC.com serves as the website for NBC News, containing content from both the news network and its cable channel MSNBC. The digital platform is co-owned by NBC Universal and Microsoft) The next three TV-based categories also carried far less presence on the websites. Financial advertising dominated on the two broadcast TV websites, with more than three times the portion of ads than the next biggest category, at 31.3%. On network TV shows financial ads were 10th at only 4.3%. 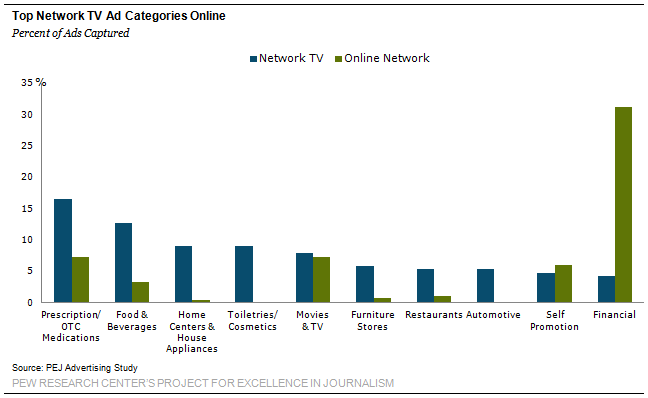 Magazines contained a fair amount of financial advertising both online (6%) and in print (9%), but differed in other ways. The largest category in print magazines was travel and hotels (at 16.7%) while on websites these kinds of ads did not appear at all.  Online the top category was in-house advertising, taking up five times the ad space as in the print publications. 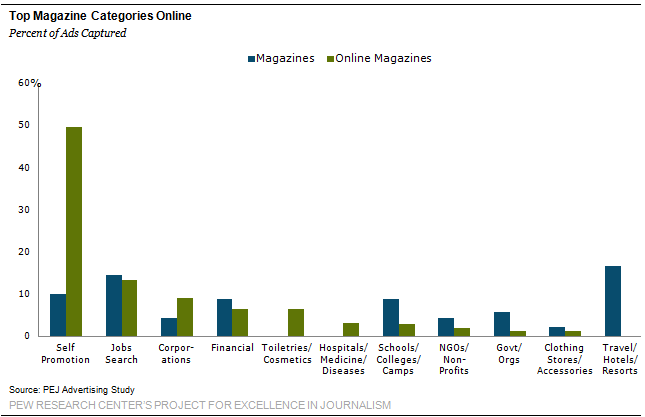 The findings on ad categories suggest that for the time being, at least, the Web and the legacy environments are different ad markets. What lies behind those differences is less clear. As Prof. Turow commented, "Why don’t the mainstay print advertisers show up in this new environment?" Whatever the reason, what comes with that is likely a heavier workload for the ad sales team responsible for multiple platforms and reduced revenue for those that turn primarily to ad networks for online ad sales.