By a margin of more than 2 to 1, bloggers overwhelmingly expressed support for the Occupy Wall Street protests that began in Lower Manhattan on September 17 and spread around the country. Almost half (46%) of the conversation on blogs championed the movement compared with 18% which was opposed (35% was neutral or straight news). Polls show the general public is more evenly divided over the goals of the movement, but in the blogosphere the message was clearly one of encouragement – though with little added clarity as to what specific actions the movement is calling for.

Last week, October 17-21, also marked one month since the protests began. And while coverage devoted 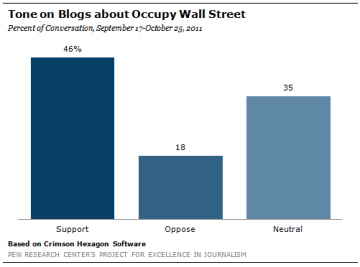 to the movement declined in the mainstream press last week, it gained attention among bloggers, ranking third overall-the first time that the subject ranked among the most discussed in the blogosphere, according to the New Media Index from the Pew Research Center’s Project for Excellence in Journalism.

This edition of the NMI includes a special analysis of the blogosphere utilizing computer technology from the media monitoring firm Crimson Hexagon to examine the tone of conversation about the protests from their origination on September 17 all the way through October 25.

Expressions of support took several forms. Some bloggers backed the movement by helping to organize and dispense information pertaining to specific rallies. Others shared the reasons why they backed the protests and what they hoped the outcomes might be.

Those in opposition, a smaller cohort overall, declared the protests to be misguided and derided the character of those involved.

The two sides came together, though, in complaining that the traditional press was being unfair in its coverage.

Support for the Movement

The blogosphere was an important space for those participating in the protests, both as a way of organizing specific occupations and of informing outsiders about what was going on.

“#OCCUPYWALLSTREET is happening right now at Liberty Plaza!” announced the Adbusters blog two days after the first rallies in New York. “Now, it is crucial for everyone from all over the world to flock to the encampment. Call in to work sick, invite your friends and hop on a bus or plane to New York City.”

“We’re still here,” posted the Occupy Wall Street blog the next day. “Today, we occupied Wall Street from the heart of the Financial District. Starting at 8:00 AM, we began a march through the Wall Street area, rolling through the blocks around the New York Stock Exchange…We are building the world that we want to see, based on human need and sustainability, not corporate greed.”

Others, not necessarily directly involved, talked about the goals of the movement.

“But, now, finally, the people hurt by the current system are making their voices heard. They are asking to be treated by the government and corporate America as though their lives were worth a damn,” pronounced Pat Greene at The Wild Winds of Fortune. “When some people in the the 99% call for tax increases for millionaires and corporations, or question bonuses and bailouts, we stand accused of ‘inciting class warfare.’ Bring it on: those who defend the status quo started it first.”*

Many complained about how the mainstream press was covering the protests.

“It is a shame that so many are unaware of this [movement] because sponsored news organizations have no desire to cover this story due to political allegations,” charged Amanda at Stupid My Cupid. “News is supposed to be unbiased. Not covering this shows EXACTLY how biased the mainstream news organizations are. It is obvious that they are merely trying to protect their own self-interests.”

“CBS has been the only media outlet actually offering any coverage of the ‘Occupy Wall Street’ demonstrations that are on-going,” wrote Bryan at Why Now a week after the protests began. “The only reference I could locate on CNN was a Tech article on the 16th about the use of social media, and even that only shows up on the International edition. The corporate media doesn’t seem interested in thousands of people holding a week-long demonstration.”

More than anything, however, blogs were used to share the same types of opinions expressed by those in the movement itself. But, as has been said of the movement overall, the comments rarely included specific actions or outcomes being sought.

“When I hear people say that the unemployed are lazy, I get angry,” admitted Dr. Benton Quest. “When I hear about rich people getting breaks because they are rich (i.e. capital gains tax rates) I get angry. If the rich were actually making jobs, I would not get angry. But when I hear about oil companies making record profits while taking tax breaks, I get angry. And if you look at the crowds in Occupy Wall Street, I am not the only one who is angry.”

Opposition to the Protests

While those who disagreed with Occupy Wall Street were not as prevalent online, there were a number that were not shy about their opposition.

“My guess is that most of the protesters are against ‘profit’ and fail to realize that profit is the fuel that keeps an economy growing,” argued Robert Wenzel at Economic Policy Journal. “Unfortunately, the protesters are unlikely to understand this and are thus likely to call for more governmnet regulation, which will mean that the banksters most cozy with government will gain an even greater edge.”

“Sadly this is a group of mixed agendas, most of them having nothing to do with a real cause, but simply an opportunity to display antics, and the baser side of the humanity,” declared Sheryl Devereaux at The Moral Liberal. “But to the slender remainder of those protesting, the invisible minority who are there beyond antics-at least as the media is portraying them-their participation is simply evidence of the lack of understanding to the way our system was designed to work and how to fix problems in our society.”

Others focused on the character of the people involved.

“They moan in blogs written on their $1,600 Macbooks about their student loan debt, cry from the comfort of their living rooms about being expected to pay for the mortgages they signed up for, scream out with their $4.50 Starbucks lemongrass frappalattecinos in hand about how life isn’t ‘fair’ and that there’s so much ‘inequality’ in the world,” criticized Rants of the Anti-Sheep.

Some critics pointed to a New York Post article about complaints from some protestors that their items were stolen.

This group also criticized the press, though in this case arguing that the coverage of the protests was too favorable.

“There has been no mainstream media investigation of who these people are,'” charged Derek Hunter at Townhall. “Instead of the truth, instead of questions, we get cheerleading and cherry-picked camera angles showing perfectly lit, perfectly well behaved, smiling people.”

“The Mainstream Media (MSM) has drooled over, cooed about, and coddled OWS, providing it with free publicity it could never afford to pay for itself and implicitly approving of its multitudinous aims,” determined Edward Cline at The Rule of Reason. 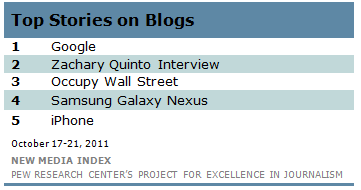 The top subject involved developments with several of Google’s products.

A number of bloggers linked to news that Google was going to close down several projects including Google Buzz and instead focus more attention on Google+. Some labeled this as a failure of Google’s early attempts at engaging social media.

Other blogs highlighted a post about the company’s efforts to make searching more secure with improved encryption. Commenters noted how this change would make work for online marketers more difficult. And a number of blogs linked to reports that Google is in negotiations with major record labels to set up an MP3 music store to compete with iTunes and Amazon. Bloggers were most interested in the notion that the new site might let users “share” music with their friends.

A New York Magazine interview with actor Zachary Quinto, which also touched on the Occupy Wall Street movement, was the No. 2 story. Quinto, who starred in the most recent Star Trek movie and the play Angels in America, talked about his sexual orientation and his conflicted feelings about the Occupy Wall Street movement. While he felt “resonance” with the position of the protests, Quinto also said that he was “deeply unsettled that people are rising up in movements against each other.”

The fourth and fifth subjects both involved popular smartphones.

News about the unveiling of the Samsung Galaxy Nexus phone running on Android software was No. 4. While the Samsung phone has not received quite as much attention as the Apple iPhone in recent months, it has been among the most popular subjects on blogs in four of the five previous weeks.

The Samsung phone was also the top subject on Twitter last week as many users linked to an animated video introducing the device and its capabilities.

The iPhone itself was the fifth largest subject on blogs. Bloggers showed their interest in the new Apple 4S by linking to reviews and stories about the Siri voice command function.

On Twitter, the site itself was the second-largest subject. The most popular link was a Mashable article citi 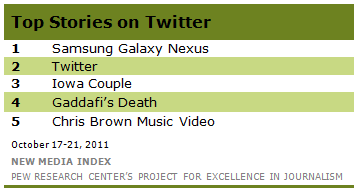 ng stats from Twitter’s CEO Dick Costolo that the social networking site has more than 100 million active users and that more than 50% of them log in every day.

A story about an elderly couple in Iowa married for 72 years was the third most linked-to subject. The two died one hour apart holding hands.

Word of the death of former Libyan leader Col. Muammar Gaddafi-the subject that led mainstream coverage last week-was the fourth subject. In an example of the reflective nature of social media, many Tweets linked to a Mashable page featuring 25 reactions to the news on Twitter itself.

The fifth most popular link was to a music video by singer Chris Brown that featured rapper T-Pain. (Warning, the video contains adult language.)

A video replay showed Wheldon’s car, unable to avoid the massive wreck, slamming into another car in front of his, going airborne and spinning before hitting the catch fence. Two hours later, the 33-year-old Englishman was pronounced dead.

This special edition of PEJ’s New Media Index utilizes computer technology from the media monitoring firm Crimson Hexagon. Based on an examination of more than 118,000 blog posts, this report goes beyond the normal methodology of PEJ’s index to look at the tone of conversation related to the Occupy Wall Street protests.

Crimson Hexagon is a software platform that identifies statistical patterns in words used in online texts. Researchers enter key terms using Boolean search logic so the software can identify relevant material to analyze. PEJ draws its analysis samples from several million blogs. Then a researcher trains the software to classify documents using examples from those collected posts. Finally, the software classifies the rest of the online content according to the patterns derived during the training.

occupy AND (protest OR “wall street” OR OWS)