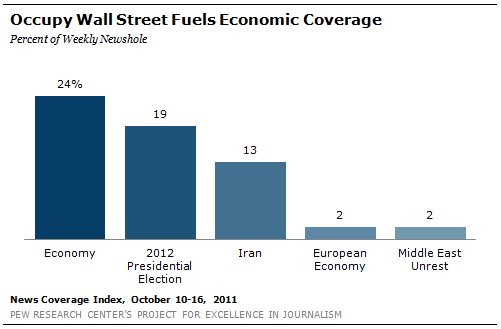 At the same time, the narrative about the protests became decidedly partisan and political.

From October 10-16, the economy filled 24% of the newshole, up slightly from 22% the previous week, according to the Pew Research Center’s Project for Excellence in Journalism.  This also marked the third consecutive week in which coverage of the protests grew, according to PEJ’s weekly News Coverage Index, which tracks the media agenda, or the attention paid to different topics in the news. Last week, the Occupy Wall Street storyline increased to 10% of the overall newshole compared with 7% the previous week and 2% the week before that.

While it is complicated to compare different news events several years apart, the Tea Party protests began with little media notice in February 2009. But they filled 7% of the newshole studied the week they went national with widespread protests on April 15 of that year.

Last week, the narrative about the protests focused intently on politics, as Democrats more fervently embraced the demonstrations and Republicans became more pointed in their criticism.

Some of that media attention was clearly negative. The subject of the economy got the most attention last week in the radio news sector (43% of the airtime studied), which includes the ideological talk shows dominated by conservatives.

Politics was also at the core of the No. 2 story last week, the 2012 presidential election, which filled 19% of the newshole. That is up slightly from 18% the previous weeks and represents the high water mark for coverage of the campaign to date.

Last week, former Massachusetts governor Mitt Romney generated the most coverage. It was a busy week for Romney. He basked in an important endorsement, found his religion under attack and started to see the “I word”—inevitability—show up in some stories. Herman Cain, the one-time long shot who has finished among the frontrunners in recent polls, was also a major newsmaker, thanks in part to rivals training their guns on his “9-9-9” tax plan.

The week’s third-biggest story was Iran (13%) after the U.S. publicly alleged that the Islamic Republic was behind an ill-fated attempt to assassinate the Saudi Arabian ambassador to the U.S. on American soil. Some coverage discussed the Keystone Kops element of the alleged plot.

Next, at No. 4, (2%) was coverage of the economic problems plaguing Europe as the European Union members tried to come up with a new debt reduction plan. And the fifth-biggest story, also at 2%, involved continuing Mideast unrest, most notably the deaths of about two dozen people that followed the breakup of a protest by Coptic Christians in Egypt.

There were other elements to economic coverage last week, including the defeat of President Obama’s jobs bill in the U.S. Senate. And the subject of unemployment and jobs accounted for about one-quarter of the week’s economic news.

But the Occupy Wall Street protests were the prominent economic theme. 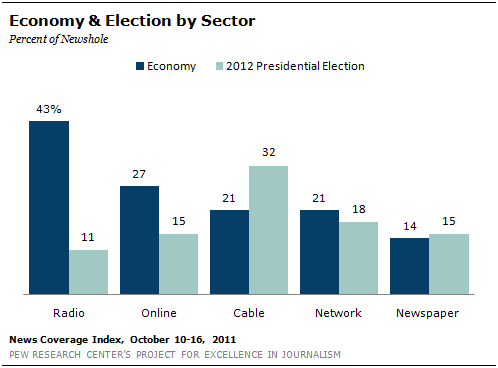 “Responses are following along party lines,” stated an MSNBC report on October 10. “Republicans are slamming the movement [with one] of them calling it a mob aimed at class warfare.” The story also showed House Majority Leader Eric Cantor charging that “we have elected leaders that are inflaming this sense that we ought to be pitting Americans versus Americans.”

That same day, the New York Times was reporting on Democrats moving to support the protests as they spread across more cities. “Leading Democratic figures, including party fund-raisers and a top ally of President Obama, are embracing the spread of the anti-Wall Street protests in a clear sign that members of the Democratic establishment see the movement as a way to align disenchanted Americans with their party,” the story stated.

Some of the attention to it came from conservative talk radio hosts condemning the movement. One element of that criticism was cultural. On his October 12 radio show, conservative host Sean Hannity said the protests were turning off many Americans who “look and watch people walking around naked, smoking pot, having sex in public…and chanting slogans” about “the evils of capitalism.” He added, “I think the country is looking at this and saying…that’s what leftism is, that’s what socialism is.”

One day later, on its nightly newscast, NBC anchor Brian Williams declared that the “center of the [protest] message is increasingly resonating,” a statement followed by news of a new NBC/Wall Street Journal poll indicating that 37% of Americans now support the protests, including  40% of those making $75,000 or more a year.

The 2012 presidential campaign was the top subject in two sectors last week, newspapers (15% of the front-page coverage studied) and on cable news (32% of the airtime studied). In that coverage, Mitt Romney was the top GOP figure. He registered as the primary newsmaker in about one-third of the stories about the campaign. (In order to register as a primary newsmaker, someone must be featured in at least 50% of that story.)

Some of that news was welcome, including the landing of a big endorsement. “New Jersey Gov. Chris Christie endorsed former Massachusetts governor Mitt Romney in New Hampshire today, providing the frontrunner for the GOP presidential nomination with a boost on the verge of tonight’s New Hampshire debate,” the Washington Post reported.  “Christie, a favorite of tea party and establishment types alike, has emphasized the need for the GOP to nominate someone not who they agree with on every issue but rather someone who can win.”

An old issue, Romney’s Mormon religion, also surfaced after Pastor Robert Jeffress, a Rick Perry supporter, called Mormonism “a cult.” Part of the media discussion focused not only on Romney, but on whether Perry needed to do more to distance himself from those remarks.

“I think at some point, Perry has to address it because it becomes about his leadership,” CNN analyst Gloria Borger ventured on October 11. “It becomes about whether he, by not saying anything directly, would endorse any kind of bigotry.”

And with recent problems in his campaign knocking Perry out of the top spot in polls, some coverage last week began exploring the idea that this was now Romney’s Republican nomination to lose.

A story on the ABC News website led with the headline, “Is Mitt Romney Inevitable?” a theme that Romney aides were quick to quash.  “Even the Romney camp itself is trying to temper the ‘sure thing’ label with a senior adviser telling ABC News the end is not near,” the story added.

As he has risen in the polls, businessman Herman Cain also began to face some closer scrutiny of his record and ideas, much of the sort that Michelle Bachmann and Perry have experienced in this campaign. It was a sign of a familiar cycle—that as a candidate appears to become more viable, they get more media scrubbing.

“Businessman Herman Cain, rising fast in the polls, absorbed several blows from his fellow Republican presidential contenders on Tuesday, as they went on the attack over his 9-9-9 plan,” Fox News reported.  “Most aggressive in their criticisms of the plan for a 9 percent sales tax, 9 percent income tax and 9 percent corporate tax were Minnesota Rep. Michele Bachmann and former Pennsylvania Sen. Rick Santorum, who said it will never come to pass.”

The coverage of the reported Iranian plot against the Saudi ambassador was the third-biggest story last week (13%), generating the most attention (20%) in the cable news sectors. Some of the coverage suggested that the U.S. resident implicated in the plot, Manssor Arbabsiar, was an unlikely and unqualified figure to be given a major role in such a complex and high-stakes plot.

An October 12 profile of Arbabsiar on NPR’s All Things Considered offered this portrait from reporter Wade Goodwyn.

“Fifty-six-year-old Manssor Arbabsiar was a small business owner for much of his life. Friends say he liked to be called Jack. He enjoyed a good time and didn’t seem religious or political at all. He had some minor brushes with the law. He was arrested for not having a valid drivers license, a charge which was reduced. A check fraud charge was dropped. He was married twice with children. Business associates described Arbabsiar’s organizational skills as marginal.”

Continuing attempts to solve the fiscal problems plaguing European countries accounted for 2% of all the coverage last week, while the renewed violence in Egypt fueled attention to the No. 5 story, Mideast turmoil, also at 2%, 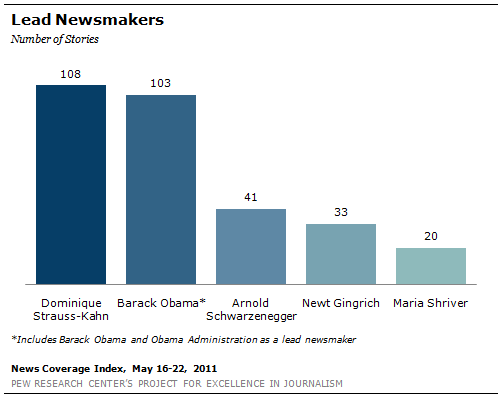 President Obama was the top newsmaker from last week. He was a primary newsmaker in 7% of the week’s stories, the same level of coverage as the previous two weeks.

The next three most prominent newsmakers were men who hope to take his job next year. Mitt Romney figured prominently in 5% of the week’s stories, Herman Cain in 4% and Rick Perry in 3%.

Rounding out the list of top newsmakers (also at 3%) was one of the key figures in the alleged Iranian plot that surfaced last week, Manssor Arbabsiar.